Is the rupee fairly valued? 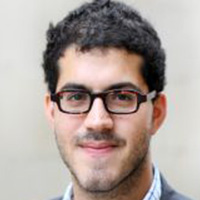 Is the rupee fairly valued, and should the RBI allow it to appreciate beyond its current rate? This column analyses new World Bank data and finds that the rupee is persistently undervalued by 30% or more. Given the undervaluation, it is puzzling to note that India runs large, structural current account deficits.

Is the rupee fairly valued? Should the Reserve Bank of India (RBI) allow it to appreciate beyond the current rate of Rs. 60 to the dollar? These are important policy questions, and will remain so, if a Modi-effect continues to dominate investor sentiment in the months ahead and attracts large amounts of foreign capital into India.

So, it is timely that new data allows us to shed light on these questions. The recent release of the latest purchasing power parity (PPP) estimates of Gross Domestic Product (GDP) by the World Bank affords an opportunity to ask whether, and to what extent, the rupee is fairly valued1. These GDP estimates are done once every five to six years, based on the elaborate survey of prices across the world conducted by the International Comparison of Prices (ICP) project. The latest estimates pertain to the year 2011, while the previous estimates were for 2005.

The new estimates are subject to the usual uncertainties. Martin Ravallion recently argued that the estimates for India were implausible. But, according to Professor Angus Deaton of Princeton, who is the world´s pre-eminent expert on these datasets, the 2011 estimates are probably the best so far, and a significant improvement on the estimates for 2005.

The new data allows us to estimate the rupee´s appropriate valuation based on the so-called PPP approach. The basic idea underlying the PPP approach is that there is a positive relationship between prices in an economy and its income per capita, known as the Balassa-Samuelson effect. Poorer countries usually have lower prices in the non-tradable sector because wages are low, which leads to low prices for services. And with prices low, the equilibrium real exchange rate will also be low, that is to say depreciated. This relationship is stable enough to provide a benchmark: for a given level of income, we can infer what the level of prices and hence the equilibrium exchange rate should be. Prices below this level indicate undervaluation, and above this level, overvaluation. 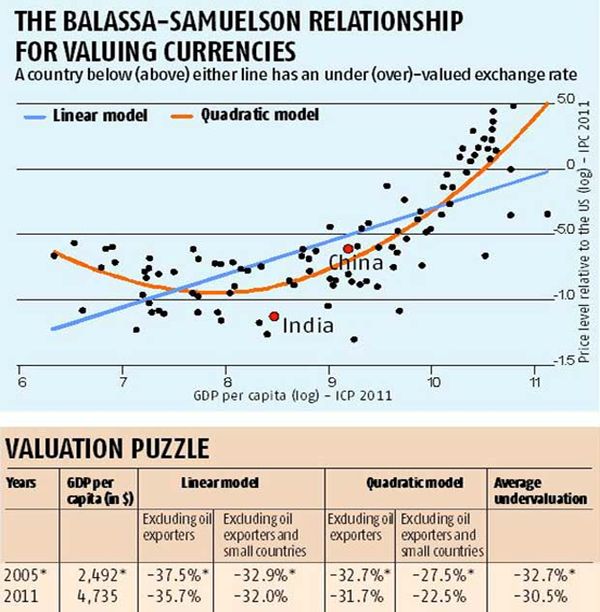 In turn, this benchmark can be obtained from a linear relationship between the price level and GDP per capita; or from a quadratic relationship, where we take into account the fact that this relationship is weak for poor countries (and hence the downward sloping part of the curve) and robust for emerging markets (the upward sloping part). Figure 1 illustrates the two models (based on a sample that excludes small countries and oil exporters).

The virtue of the PPP approach is two-fold. It is relatively uncontaminated by short-term and volatile swings in exchange rates, yielding a better long-term assessment. Also, it is based on ground realities because the data on aggregate prices are collected for thousands of commodities and locations within a country. They measure more accurately price incentives facing the numerous producers and consumers in an economy.

For India, we find that the average currency undervaluation for 2011 using the latest data is about 33%. In Figure 1 (The Balassa-Samuelson Relationship for Valuing Currencies), it can be seen that India is clearly below the line which represents points of fair valuation (that is, neither under- nor over-valuation of currencies). We can use the estimates for 2011 and project the undervaluation for 2014. Applying the PPP approach suggests that the real exchange rate should have appreciated by a further 1%. In fact, the rupee depreciated by between 1% and 6% depending on the start and end-points. We can, therefore, assert that today the rupee continues to be undervalued by about 30% or more.

These results have implications for the debate in India on the rupee. There is no doubt that changes in the rupee have effects on exports and the current account. India´s current account deficit has declined from a peak of about 5% to about 2% most recently, and the declining rupee played an important role even though the magnitudes are uncertain.

For this reason, it would be risky for the RBI to allow the rupee to appreciate too much - particularly given continuing high inflation - because that could reverse recent gains in bringing down the current account deficit.

But then, why does India still have large current account deficits?

But there is a deep puzzle thrown up by these results. Using the same methodology for 2005, we find that the average currency undervaluation for India was about 33%. But Professor Deaton argues that the 2005 estimates for Asian countries, including China and India, were systematically over-stated (hence the asterisks accompanying the 2005 estimates in the table, Valuation Puzzle). That means that the likely undervaluation of the rupee in India for 2005 was even greater. In other words, between 2005 and 2011, rupee undervaluation has declined but has been substantially high in level terms. This will, and should, surprise many in India who consider the rupee to be overvalued.

So, the puzzle is why India runs large structural current account deficits, averaging 2% of GDP, if it has had persistent and high rupee undervaluation exceeding 30%. After all, with such a competitive exchange rate, resources should be flowing into the tradable sector and generating a boom in exports and in import-competing production.

Further research is necessary to shed light on this puzzle but we cannot resist two speculative thoughts. First, macroeconomic factors such as the large fiscal deficit - in addition to the level of the rupee - play an important role in determining the structural current account deficit. Second, despite ’prices being right’, indeed ‘too right’ (if these estimates are reasonable), deep-seated structural rigidities are impeding the flow of resources into manufacturing and other tradable sectors in India. Identifying them, and eliminating or diluting their effects, must be a top priority for the new government.

A version of this column has appeared in the Business Standard.