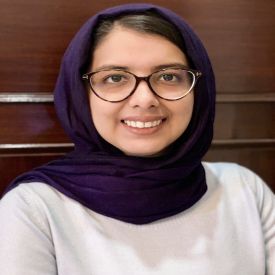 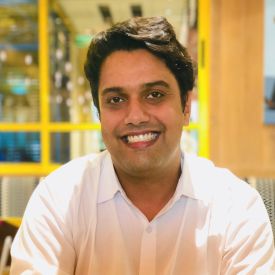 July 2022 marked the completion of seven years of the Digital India Mission, which aims to transform India into a digitally empowered society. One of the three key pillars of the flagship programme – ‘Governance & Services on Demand’ – aimed to build on the past successes of the Centre and state governments in the area of e-governance, to foster seamless, integrated, platform-agnostic, universal access to digitally transformed services for citizens. Towards this goal, e-Kranti, the National e-Governance Plan (NeGP) 2.0, focussed on transforming government through technology and driving electronic delivery of services.1 The internal governance transformation involved significant re-engineering of government processes using IT to improve transactions, workflow automation, electronic database sharing, and the critical overhaul of the Centralized Public Grievance Redress and Monitoring System (CPGRAMS) portal. The citizen-facing service delivery improvements focussed on driving greater demand by transforming the electronic service delivery across education, healthcare, agriculture, justice, financial inclusion, security, and urban services, among others. After FY2017-18, the emergence and adoption of a platform-based approach to e-governance service delivery has further fueled this transformation.

In this article, we conduct a unique analysis of the usage of e-governance services in India, based on a critical metric, an ‘e-transaction’, tracked by the Electronic Transaction Aggregation & Analysis Layer (eTaal) portal. The portal provides a real-time aggregated view of the volume of end-to-end e-transactions occurring across different tiers of the government.

The platform defines an ‘e-transaction’ as a “transaction delivering public service using ICT [information and communications technology] tools to improve access, enhance transparency and reduce response time while also satisfying all of the following four conditions: (i) Service is requested through electronic means (self-access or assisted access) including mobile devices, (ii) workflow/approval process is electronic, (iii) database is electronic/digitised, and (iv) service delivery is electronic”. Given this comprehensive definition, the volume of e-transactions is a potent metric that can measure the ‘outcomes’ of Government-to-Citizen (G2C), Government-to-Business (G2B), and Business-to-Citizen (B2C) e-services across ministries, states, and service categories.

eTaal has integrated over 4,000 e-services, and provided time-series data for about 416 billion e-transactions since its inception in 2013. Figure 1 reveals a 43 time increase in number of e-transactions from 2013 to 2021.2 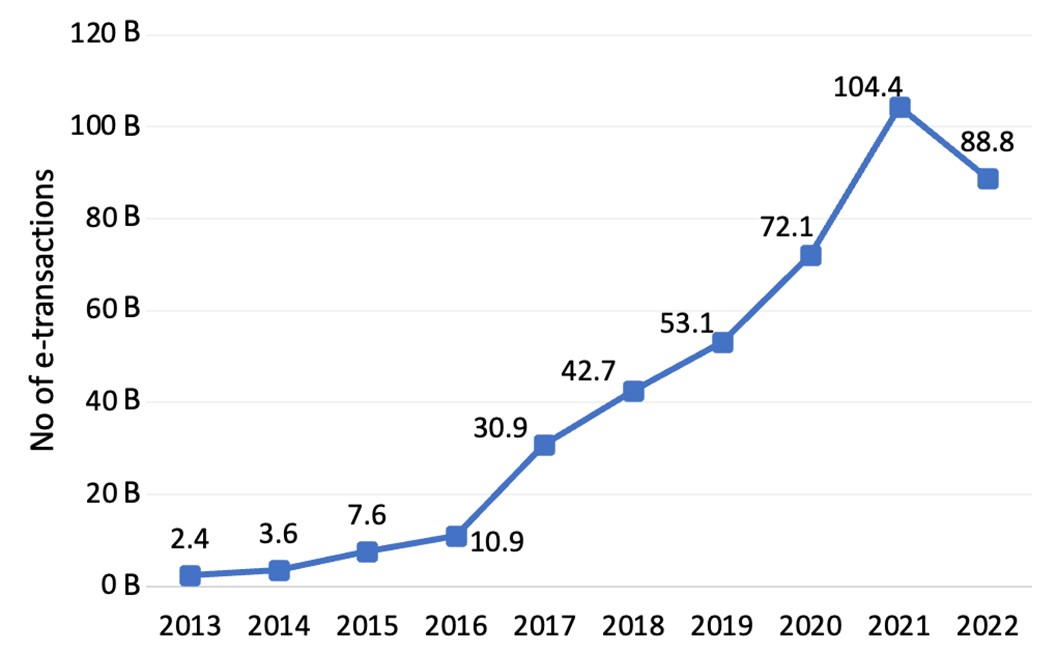 e-Taal buckets all e-services into six different categories. Figure 2 shows that 55% of all e-transactions from 2013-2021 by volume fall under the B2C service category, followed by statutory and non-statutory services category at 30%.

The B2C service category saw a 3823.8% increase in number of e-transactions in FY2017-18, and since then the number has been growing at an exponential rate (see Figure 3). Statutory and non-statutory services witnessed a 147.9% increase in e-transactions count in 2017-18, post which the growth has stagnated. 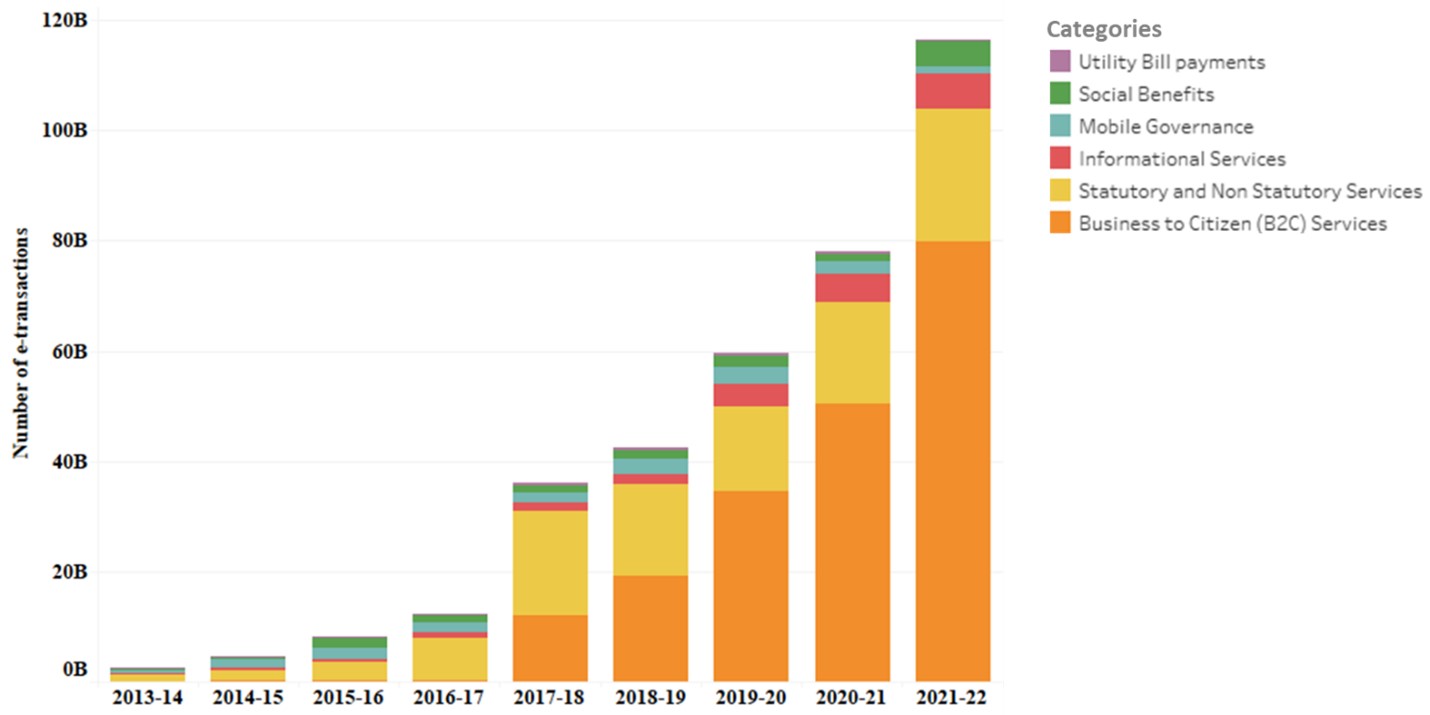 We further analyse the project wise break-up of these top two service categories. Under the B2C services category, 99.5% e-transactions are from central projects, out of which 99.53% are from digital payments (Figure 4). The jump in e-transaction counts in FY2017-18 can also be attributed to the adoption of digital payments.

Figure 4. Number of e-transactions from central projects, by project type, under the B2C services category

The breakup of e-transactions as per the exact type of service under digital payments in Figure 5 reveals that the highest growth was seen in the adoption of Unified Payments Interface (UPI) services over the years, followed by prepaid payment instruments and debit cards.

Under the statutory and non-statutory services category, Unique Identification Authority of India (UIDAI) services account for 98% of the total volume of e-transactions (see Figure 6). UIDAI services saw a jump in FY2017-18, following which the number of e-transactions under this service category has not seen a major change.

Figure 6. Number of e-transactions by project under the statutory and non-statutory services category

A deeper enquiry into this trend (Figure 7) reveals that UIDAI provides two kinds of services: A ‘Yes/No’ authentication validating the Aadhaar, demographic, and/or biometric information; and a full-fledged ‘e-KYC’3 that returns digitally signed, encrypted KYC data. While both the e-authentication as well as e-KYC transactions reduced in FY2018-19, the further drop in e-transactions in FY2019-20 was driven by reduction in e-KYC transactions. This can largely be attributed to the saturation of Aadhaar penetration, and it’s seeding with basic services like bank accounts and PAN cards that was driving the growth during the initial years. 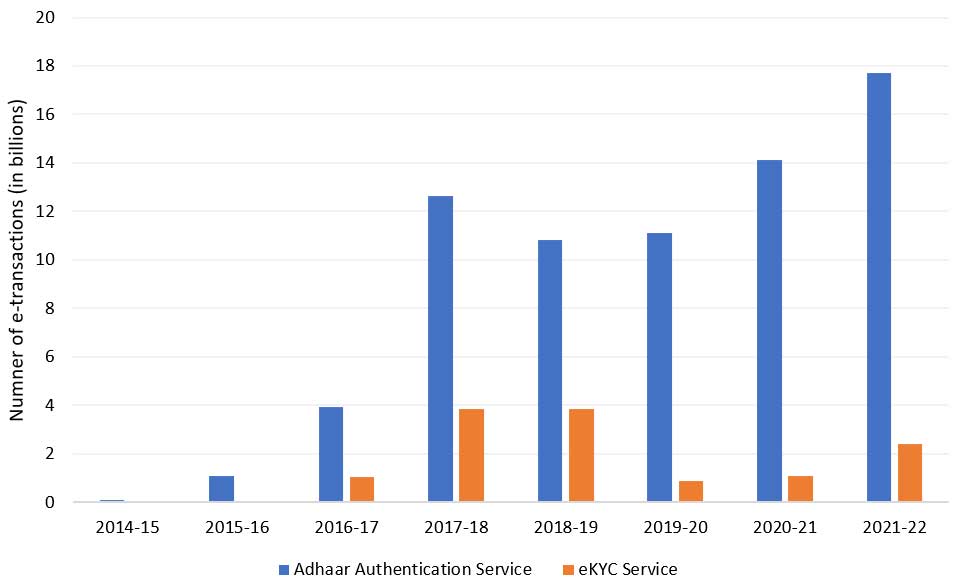 Analysis by state and union territory 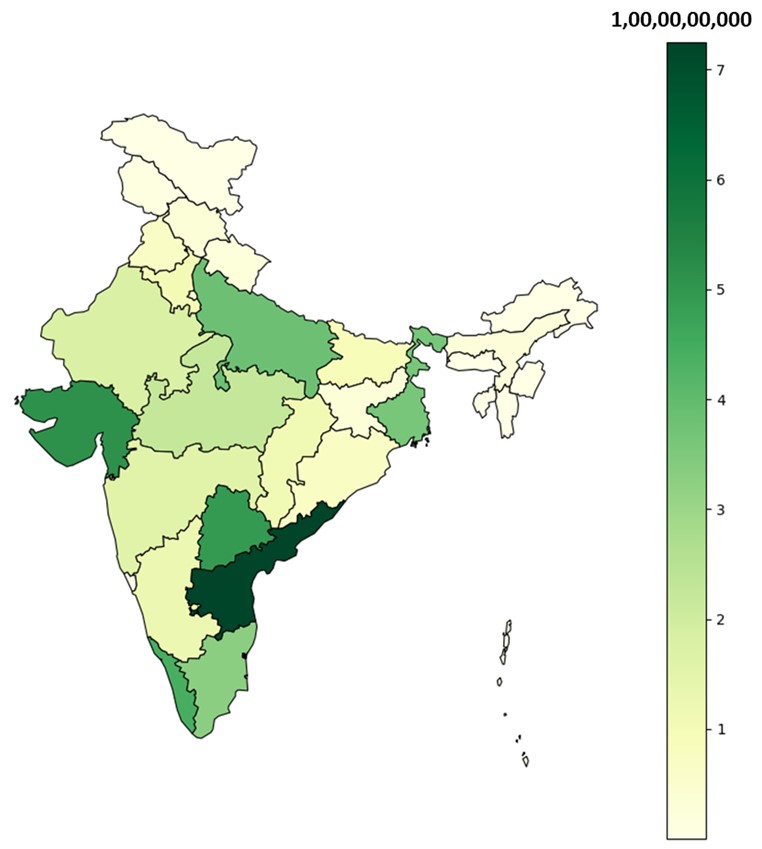 Figure 10 showcases the temporal trend in the number of e-services and e-transaction density across states. It is evident that initially, the leading states in particular tend to convert their existing offline services into e-services through basic digitisation. This leads to a large number of services being available, but their usage still continuing to be low in terms of e-transactions density. Eventually, as quality of service becomes a priority, the need for convergence leads to a lower number of e-services with increased usage, which points to the evolving maturity of e-government applications in such states.

Looking at the state and category-wise e-transaction split (see Figures 11 and 12), we note that Andhra Pradesh and Telangana have more e-transactions in the social benefits services category; this volume largely belongs to the social welfare pensions and rural development services. Under the social welfare pensions services, the maximum transactions were through social security pension releases to beneficiary accounts, while for rural development services, the maximum e-transactions were Aadhaar-linked payments to beneficiaries and loan requests for unemployment in villages. 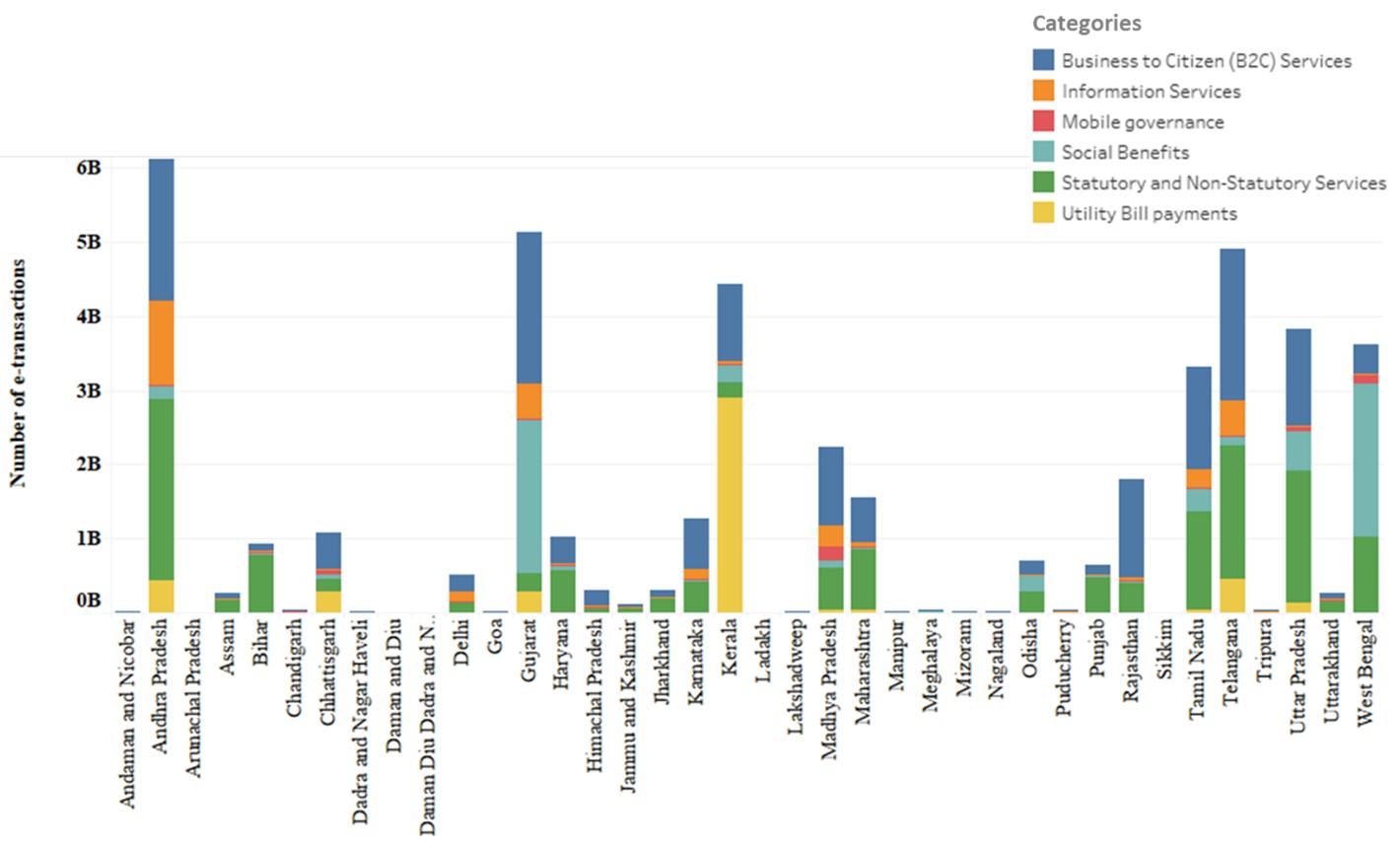 The adoption of e-transactions for mobile services is exceptionally high in Kerala. This is can largely be attributed to the strong legacy of ICT-based reforms: right from the Akshaya project – India’s first e-governance project – to the mGovernance project launched by Kerala State IT Mission (KSITM) in early 2010 to cover over sixty state departments and provide mobile services using SMS and an integrated service delivery platform (Karunakaran 2011, Nissar 2014).

Andhra Pradesh, Gujarat, and Telangana have recorded higher e-transactions in the statutory and non-statutory services as compared to other states. For Andhra Pradesh and Telangana, this is largely due to the excellent implementation and adoption of 'MeeSeva’, a portal which provides smart and efficient citizen-centric delivery of an entire range of G2B and G2C services through a one-stop platform.

In the early years, Gujarat gained a large number of e-transactions by issuing and receiving public distribution system (PDS) food coupons; however, over the years, informational services like viewing exam results and land records online have also resulted in a high number of uses. Gujarat has also been one of the leading states in the implementation of e-governance through infrastructure, policies and projects.4

Figure 13. shows that almost 97% of the volume of cumulative e-transactions from 2013-2022 were concentrated within five union ministries – namely the Ministry of Finance, Ministry of Electronics and Information Technology, Ministry of Agriculture and Farmers Welfare, Ministry of Law and Justice and Ministry of Petroleum and Natural Gas.5

Source: Authors’ calculations based on data published on the eTaal dashboard.

Figure 14. Distribution of e-services and e-transactions for union ministries by year 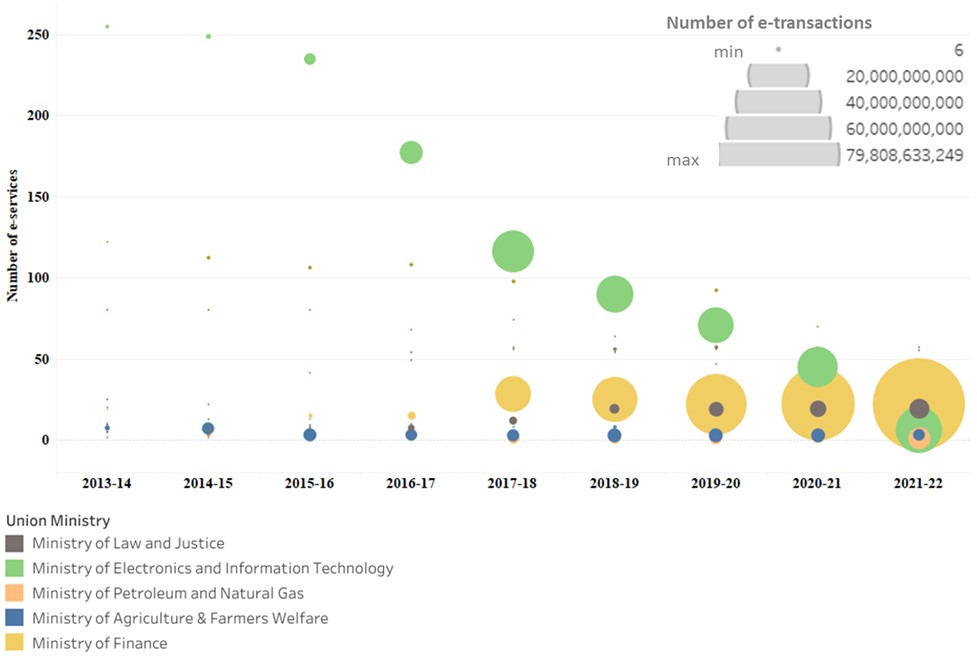 Source: Authors’ calculations based on data published on the eTaal dashboard.
Note: The legend is intended to help distinguish the trend seen in the top five union ministries in terms of number of e-transactions; the remaining data points are drawn to display the general trend over the years.

Our presentation and analysis of these statistics reveal that India has experienced an exponential growth in the adoption of e-governance services. Digital payments and UIDAI have been the key drivers of this growth, demonstrating the widespread success of two key elements of the Jan Dhan-Aadhaar-Mobile (JAM) trinity. Additionally, the transfer of social benefits (incorporating the third pillar of Jan Dhan accounts) has also seen 192% growth since 2015, which corroborates the widespread adoption of Direct Benefit Transfer (DBT) in almost all major developmental and social protection programmes of the Government of India.

At a sub-national level, states and union territories with early adoption of e-government initiatives such as Andhra Pradesh, Telangana, Gujarat, and Kerala have led the way, with most other states catching up significantly post FY2017-2018. The adoption trends of the leading states over time demonstrate the initial shift from informational or communicational to transactional stages of e-governance development, with the growth concentrated in a large number of siloed e-services. This was subsequently consolidated into fewer but more integrated services, highlighting the shift in focus towards improved quality of services, and thereby driving increased use of e-governance services.

Overall, the findings indicate that India is presently on its way from the ‘transactional stage’ towards the ‘integration stage’ of e-governance development. With the current government’s continued focus on open and unified digital platforms, India is well on its way to leapfrog into the arena of interactive democracy. The agenda that lies ahead for most states and ministries to move towards, is breaking through silos to arrive at a more citizen-centric, unified, platforms-driven approach towards improved e-governance service delivery.