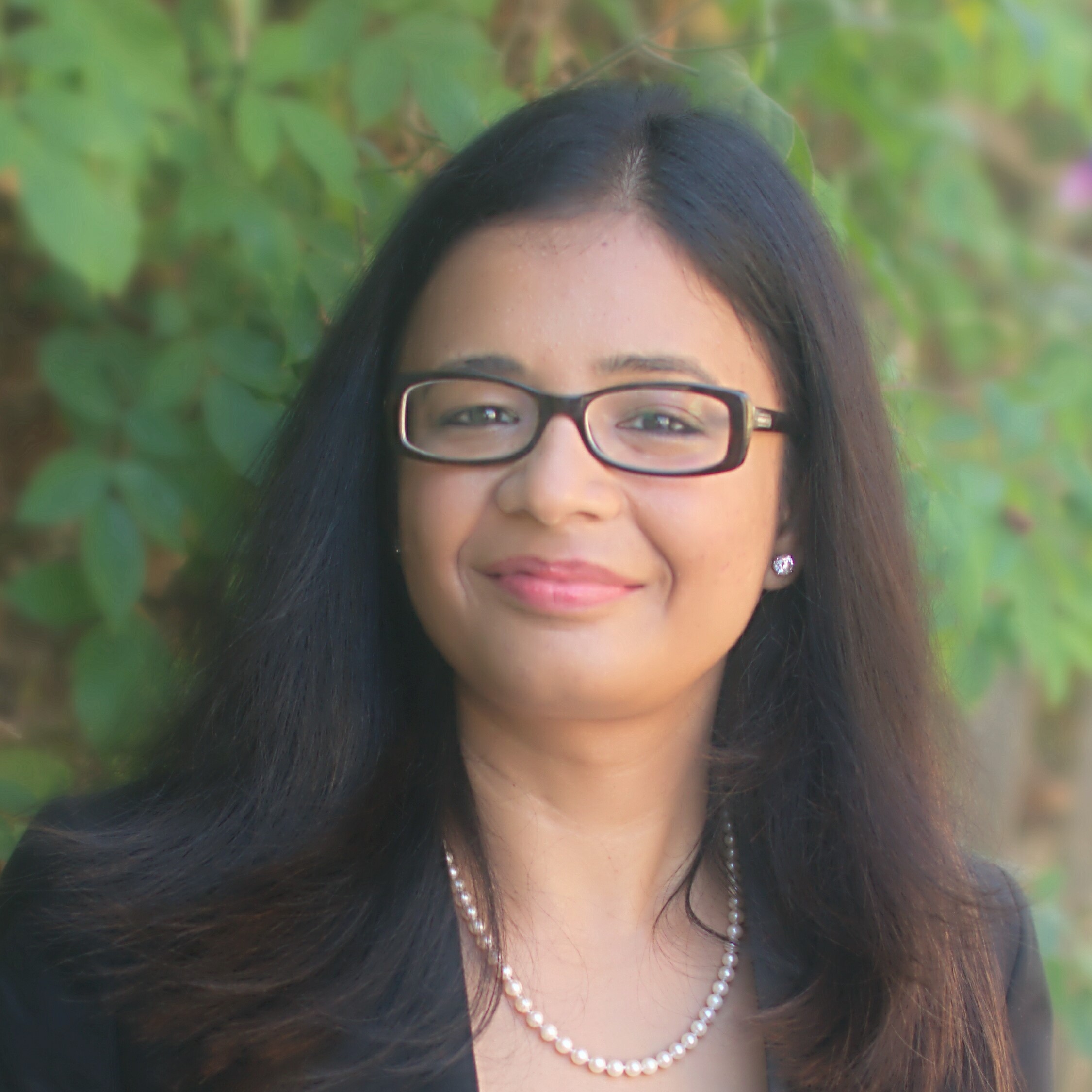 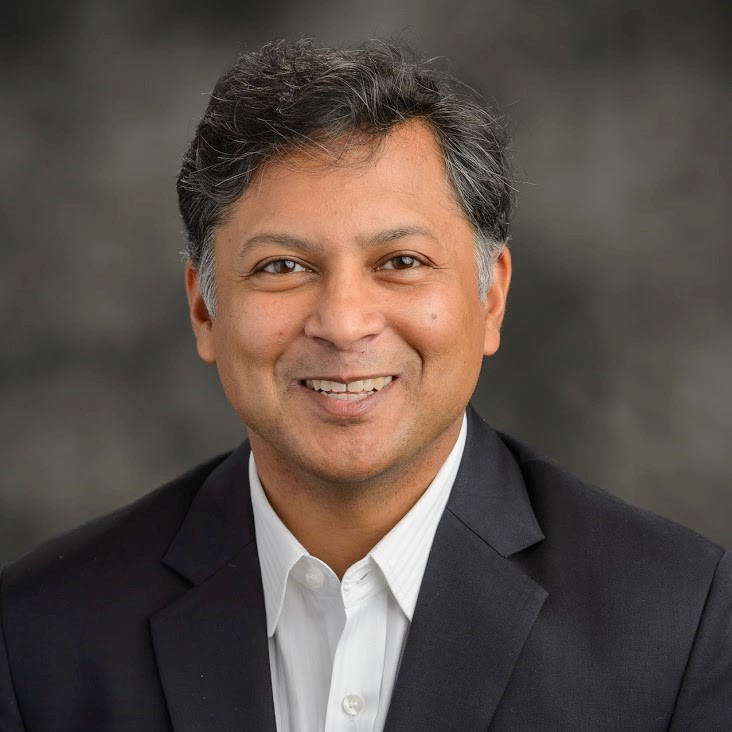 Canonical predictions of life-cycle models indicate that households will smooth consumption over their lifetimes. Conversely, empirical data from high-income countries have shown that consumption continues to rise with income. Using 2014-2019 Consumer Pyramids Household Survey (CPHS) data, this article shows that in the case of India, consumption tends to be smoother despite comparable income growth to the US, largely due to expensive physical assets depressing non-durable consumption, and the inability to spread out these large expenditures.

Consumption and savings behaviour over the life-cycle of individuals and households has been widely researched in developed economies. From an empirical perspective, the behaviour of consumption expenditure over an individual’s lifetime in relation to their income, has important policy implications – in terms of the adequacy of retirement savings, the ability of households to weather unexpected large negative shocks such as those related to extended unemployment, healthcare, and the ability to even out payments for large purchases such as houses and personal vehicles. Yet, outside of developed economies – except for China in recent decades – very little to nothing is known about how consumption and savings change over an individual’s lifetime. For India, we are unaware of any systematic study.

The canonical predictions of lifecycle models going back to Modigliani’s Nobel prize-winning work are well-known. Households are predicted to smooth consumption over their lifetimes. With incomes beginning at low values, subsequently rising until retirement, and followed usually by a drop (and reliance on pensions), this translates initially into negative savings, which then increases during working life, followed by a drawdown during retirement. However, rich empirical data from high-income countries have not supported the prediction of consumption smoothing. For example, Fernández-Villaverde and Krueger (2007) in their influential study note that even after controlling for family composition, consumption continues to rise with income in the US. Researchers have pointed to factors such as the inability to borrow, combined with uncertainty regarding future incomes to explain the data vis-à-vis the predictions of the model. Uncertainty regarding future incomes, makes lending to households at early stages of their careers a risky prospect for financial institutions even in high-income countries. Combined with the fact that individuals themselves cannot predict their future growth in incomes perfectly, this means that consumption expenditures tend to track incomes leading to positive savings. For China, some of the differences are also often attributed to the marriage market and the competitive savings motive (Du and Wei 2013)1.

In the case of India, the absence of research may come as a surprise, especially given the amount of work that has been conducted using consumer expenditure surveys on poverty and inequality, risk-sharing strategies by households, and effects of microfinance. However, most of this work relies on rural, and usually agricultural, households. The samples are smaller, do not always contain income data, and are concerned with specific questions such as consumption insurance against weather shocks, the role of marriages and caste networks in risk-sharing, etc2. However with a few decades of relatively rapid economic growth accompanied by urbanisation and declining rural poverty (Chanda and Kabiraj 2020), as well as the availability of rich household data, it is worthwhile to investigate some of the aggregate patterns.

In a recent study (Bairoliya et al. 2021), we conduct, what we believe is the first in-depth analysis of life-cycle consumption and savings in India, covering the period 2014-2019, using a large longitudinal households survey – the Consumer Pyramids Household Survey (CPHS), conducted by the Centre for Monitoring the Indian Economy (CMIE). First, we provide a comprehensive picture of the behaviour of Indian households in comparison to those in the US3. This provides a useful benchmark since research on life-cycle behaviour has largely used data from US households. Second, while we are concerned with the aggregate, as with much of the macroeconomics research on consumption, we also consider heterogeneity. This is especially relevant for India where there are large rural-urban gaps. We also consider nuclear and extended families separately. Third, we examine the growth of income relative to that of consumption. Fourth, which follows directly from the third, we examine savings rates over the life-cycle of the head of the household. Fifth, we document the strong relationship between the savings rate and purchases of durables – which we argue is an important reason why Indian households behave quite differently from that of the US. We summarise our findings below.

Household consumption growth in India is slower than in the US

Notes: (i) Household consumption relative to age 24 (household head) is reported for both the US and India. (ii) Adjusted refers to total household consumption divided by family size using a modified OECD (Organisation for Economic Co-operation and Development) scale that assigns a weight of one to household head, 0.3 to each child under/of the age of 16, and 0.5 to each adult over the age of 16. (iii) Expenditure categories include total expenditures on food, transportation, education, childcare, healthcare, clothing, household repairs and furnishing, trips and recreational activities, and housing (rent, utilities, telephone, and internet).

Theories of consumer optimisation are centred around the individual and not the household. However, data are always recorded at the household level. A common practice is to construct a measure of equivalent adults to rescale the household consumption to that of a per adult value. In our research we adopt the OECD (Organisation for Economic Co-operation and Development)5 convention. Once we do that, the picture as seen in the right panel in Figure 1 changes dramatically for India. Consumption per equivalent adult is now almost completely flat while that of the US continues to exhibit the previous pattern.

This raises further questions – if Indians do not increase non-durable consumption over their lifetime, is this because of subsistence income constraints, or are there other reasons? Conventional economic thought suggests that if a household’s income growth over its life-cycle is uncertain, then some of this growth translates into growth in consumption. Even if income growth is predictable, borrowing constraints make consumption smoothing difficult. The absence of growth in adjusted consumption for Indian households hints at three different possibilities. First, they are able to perfectly smooth consumption over the life-cycle and there are no borrowing constraints or uncertainty in wage growth. This seems very unlikely. Even though a sizeable fraction of Indian households reported some debt in 2019 – 35% for rural and 22% for urban – the actual amount of debt relative to total assets was low at 3.8% and 4.4%, respectively. In comparison, 77% of US households carried some debt in 2019, and the debt to asset ratio was 15%. Since, irrespective of country, younger households are the ones who are more likely to borrow, smoother consumption in India cannot be explained by their greater borrowing against future income. A second possibility is the polar opposite – Indian households are severely borrowing constrained, consuming their income every period, which in turn exhibits no growth. A related possibility is that they face seasonal fluctuations in income that lead to either precautionary savings that dissipate quickly or cycles of indebtedness leading to no growth in consumption. A third possibility is that in addition to standard savings motives that operate in high-income countries, Indian households cannot borrow easily to finance large purchases, and therefore must save up to make these purchases. We disentangle these possibilities, and highlight the importance of the last mechanism. First, we look at income. 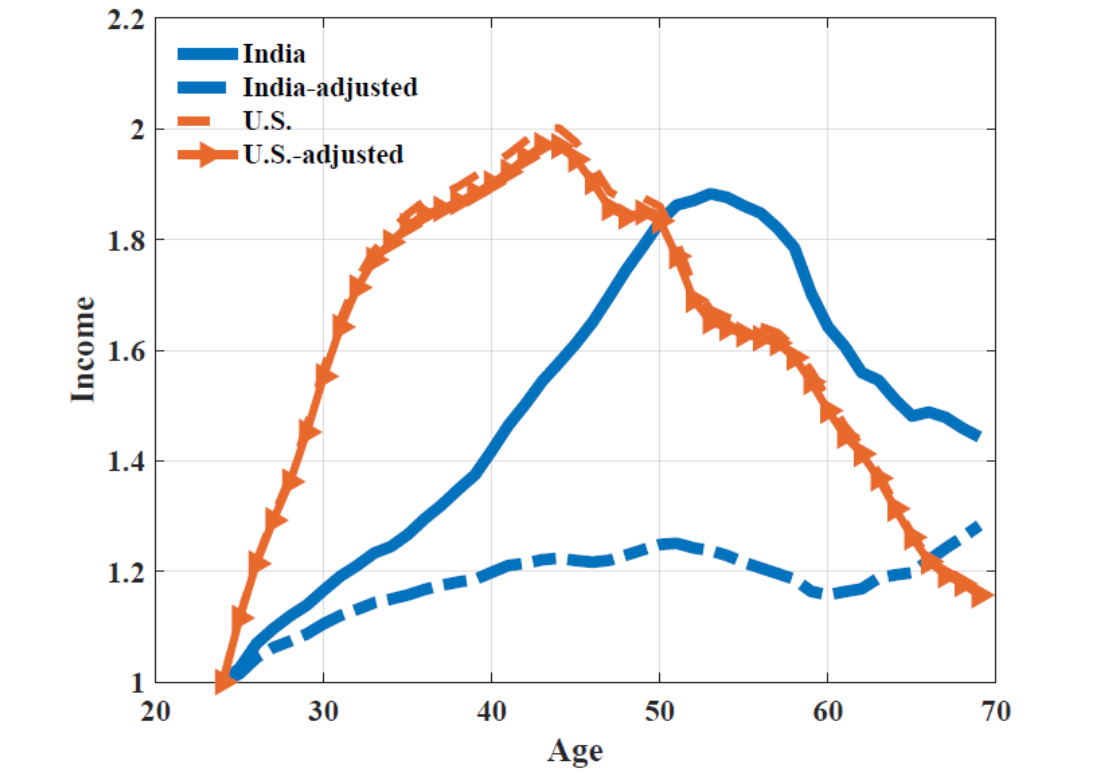 Note: ”Adjusted” refers to household income divided by the number of earning members in the household for both US and India.

The finding that non-durable consumption after adjusting for family size stays relatively flat while the savings rate starts at positive values and continues to increase implies that households in India do not smooth consumption as traditional theory suggests. Instead, they save to accumulate durable goods, physical assets such as homes, cars, and in rural areas, tractors and cattle, and/or financial assets. We investigate this in further detail.

Since Indian households typically have very little in financial assets (Badarinza et al. 2017), we focus on durable goods, and, mainly, physical assets. Although the survey does not include actual amounts devoted to these categories, it records a physical inventory as well as both expected and actual purchases in these categories. We focus on four major types of physical savings that lead to lumpy purchases – house and land, cars, tractors, and cattle. The latter two are more applicable for agricultural households. We also construct an asset or durable goods index using all available information on major and minor durable goods owned by households9. Empirically, as shown in Figure 4, we document that this index of durable goods exhibits a strong hump over the lifecycle (roughly 80% growth), and at the same time we also find that the intention to purchase some of these assets are predictive of higher savings rates. The life-cycle profile of purchases of durables and physical assets also clearly exhibits a hump-shaped profile. 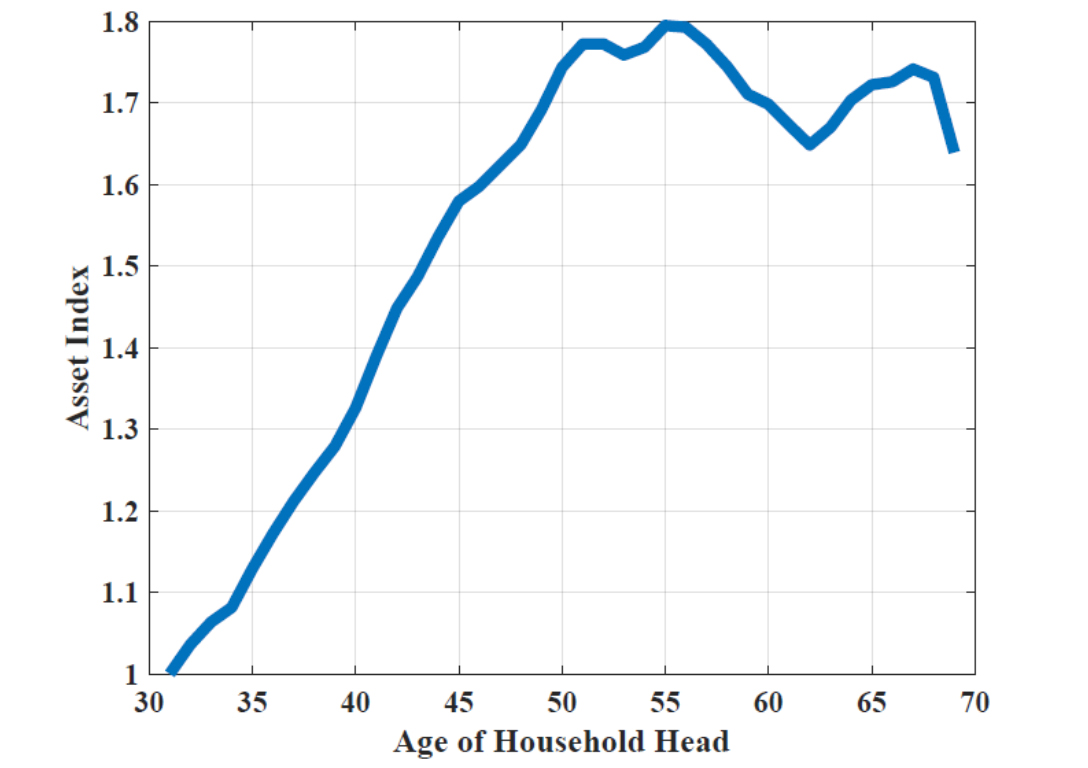 We examine several patterns of life-cycle consumption and savings rates in India. In high-income countries like the US, it has been widely documented, that despite theoretical predictions of consumption smoothing, consumption tends to track income. This has been attributed to uncertainty regarding future income paths and restrictions on borrowing, among other factors. In India, one would expect these factors to be even more salient. Yet, we find that consumption tends to be smoother despite comparable income growth. Upon further investigation, we highlight the importance of durable goods and, particularly, expensive physical assets such as homes and cars, that depress non-durable consumption. It is the inability to spread out these large expenditures, that force households to depress non-durable consumption.

We also consider various sources of heterogeneity in Indian households – extended versus nuclear families, urban versus rural households, different types of occupations, and the appropriate choice of a household head (traditional versus economic)10. While there are differences in degree, the main finding remains. From a policy perspective, this highlights the importance of credit availability. Even though India has made huge gains in financial market development and easier availability of consumer loans, clearly much more needs to be done, especially since land and housing are the principal asset classes.