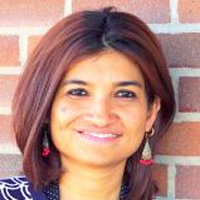 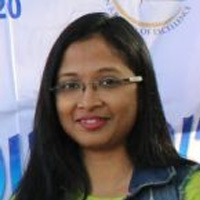 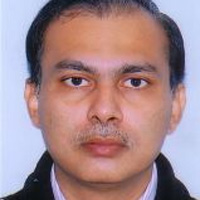 The gravity and frequency of juvenile crime incidents in recent years point towards the urgent need for rigorous analysis of the issue. Based on data from Indian states, this column shows that juvenile crime tends to rise with rise in per-capita income – but at a diminishing rate. Further, higher levels of adult crime enhance the positive impact of per capita income on juvenile crime rates.

An extensive literature - beginning with lesser-known Beccaria (1963) and well-known Becker (1968) and intermittently enriched by several important studies (example, Levitt 1998, 2004, Lochner and Moretti 2004, Lee and McCrary 2005) - examines various dimensions of the economic implications of criminal activities per se. However, there is little discussion, in terms of economic and statistical analysis, on the preponderance and gravity of juvenile crime as compared to adult crime in many countries. It hardly implies that juvenile crime is not important from the legal and/or socioeconomic perspectives. On the contrary, several abhorrent incidents in the recent past point towards the urgent need for analysis of juvenile crime that goes beyond stereotypical psychological issues of disturbed childhoods.

While some of the evidence referred to above identifies certain determinants of juvenile delinquency in developed countries, such attempts for developing countries are few and far between (see Tyagi 2016 for India). Like many other issues wanting robust empirical support, juvenile crime suffers from poor data and unreliable estimates from public sources, making an appropriate economic model difficult to construct (see Dehal et al. 2015 for India, Munyo 2015 for Uruguay, Ozen et al. 2005 for a province in Turkey).

The infamous Nirbhaya incident in New Delhi in 2012, or the brutal murder of a standard XII student by his four minor friends in Greater Noida (near New Delhi) have large negative externalities for the economy and the society. In the last decade, several other cases of rape, burglary, gang wars, smuggling and drug pedaling epitomise an era of heightened juvenile crime. The National Crime Records Bureau (NCRB) reports 100-300% rise in juvenile crime across the country. Recently, the Supreme Court of India has lowered the age of juvenile status to 16 for indictment.

In recent research, we analyse whether the steady rise in juvenile crime in India is influenced by state-level characteristics, including per-capita income (Dutta, Jana and Kar 2016).

As mentioned, availability of data is a huge constraint in exploring the determinants of juvenile crime. For example, perception of inequality across income classes transmitted to juveniles could be a significant factor; or, the cultural traits of litigious adults engendering considerable unhappiness transcending moral limits of societal tolerance could spread among the youths. These effects are rather difficult to quantity via empirical analysis because of lack of suitable variables and adequate data.

The level and distribution of income are influenced by various institutional and legal factors. The same might also play a significant role in most cases of juvenile and adult crimes. Therefore, it would not be impertinent to investigate if the rise in juvenile crime across Indian states has a lot to do with rise in per-capita income, or with worsening law and order, or simply because illiteracy rates did not fall as desired. Indian states have shown divergent growth in per-capita income over the years, which may be an outcome of economic reforms creating spatial inequality. Indeed, the success of a state depends on catching up faster with the new modalities of production and services once aggregative reforms are initiated. At the same time, the flow of information and homogeneity of living standards among similarly-placed households have caught up with the socioeconomic practices in the country much more rapidly than income convergence. Consequently, availing of means to reduce economic disadvantages may be a cause of crime among youths. Therefore, since income distribution might be treated as a defining element, specific measures of economic inequalities such as the percentage of homeless families among urban and semi-urban population could add further strength to the answer we seek.

In addition, juvenile crime may increase in response to inadequate regulations and punishments (law enforcement officers in many places agree that heinous crimes committed by youth at the borderline of adulthood go under-punished). Besides, one may factor in the influence of adult crime on juveniles as an important determinant of delinquent behaviour. Finally, poor coverage and implementation of juvenile justice policies across regions (including access to juvenile homes and correctional facilities at the state level) could also be a potential cause.

Overall, we expect these and other related factors to cover substantial ground in explaining the incidence of juvenile crime.

The NCRB data suggest that two types of juvenile crime largely cover the spread: property crime and physical crime.1 We are particularly interested in the relationship between net state domestic product (NSDP) per capita and incidence of property crime committed by juveniles. That the database is most populated in favour of property crime offers an advantage in this matter. We analyse NCRB data for the period 2001-2013 for 17 major Indian states where approximately 95% of the total population of the country resides.

We also look into different factors that can potentially affect the relationship between juvenile crime and per-capita NSDP: adult crime and illiteracy rates at the state level. Adult crime (comprising both physical and property crimes) can be indicative of the law and order situation of a state. In states where adults are gainfully employed and display higher stock of human capital, higher levels of economic development seems to be a natural outcome and might lead to stronger deterrence effect on crime, since teenagers can potentially get employed. Thus, higher levels of illiteracy should mean quite the opposite. The considerable spatial heterogeneity displayed by different state-level characteristics of a country like India is expected to yield interesting dimensions.

We start our analysis with empirical estimates that take into account time-invariant factors like geographical location, extent of ethnic diversity, cultural and social capital that can affect juvenile crime rates. There are concerns that there may be multiple, interlinked determinant factors therefore considering any one factor in isolation cannot explain the incidence of juvenile crime. To address this, we also consider the level of incidence of juvenile crime one year earlier and sometimes three years earlier, in order to observe if historical trends are important here. The main results continue to hold.

We find juvenile crime to have a non-linear relationship with per-capita NSDP. As state domestic product rises, the incidence of crime goes up at a diminishing rate. As a poor state becomes relatively richer, the opportunities to commit crime and returns from property crime both increase. However, as the state grows even richer, employment growth and State facilities including rehabilitation and redistribution, improve. This may cause a turnaround for the incidence of crime.

In Figure 1, we illustrate one of our main findings based on the empirical estimates. We find evidence of non-linearity between per-capita NSDP and juvenile crime rates. We further find that occurrence of juvenile crime is enhanced as adult crime level rises. The line corresponding to 75th percentile of adult crime has the worst level of juvenile crime across all levels of NSDP per capita. 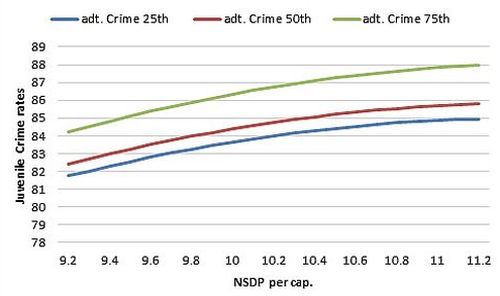 Note: The (green) line corresponding to top 25% of adult crime reported at the state level, has the highest level of juvenile crime across all levels of per-capita NSDP.