In this article, Parikshit Ghosh, Associate Professor of Economics, Delhi School of Economics, assesses the performance of the social sector under the NDA government at the end of two years in office.

As the NDA (National Democratic Alliance) government completes two years in office, report cards are being prepared. How has the social sector fared under Prime Minister Narendra Modi? It is not easy to answer this question because outcomes in health, education or sanitation change slowly and good data emerges infrequently, after a Census or a National Sample Survey round. At this point, we can judge performance more by effort and policy than results.

Many of the UPA’s (United Progressive Alliance) signature policy initiatives were in the social sector. It laid the foundations of a welfare State through statutory entitlements to food, employment, education and information. Where the UPA fell short was in implementation – the poor did not get all the benefits because of corruption and inefficiency. There were huge leakages in the PDS (Public Distribution System); MNREGA (Mahatma Gandhi National Rural Employment Guarantee Act) funds were siphoned off using ghost beneficiaries and the Forest Rights Act remained largely confined to paper.

Expensive welfare programmes (the combined cost of the National Food Security Act (NFSA) and MNREGA comes to a shade under 2% of GDP (Gross Domestic Product)) had its critics. There was the ‘grow first, redistribute later’ view, which argued India should, for now, concentrate scarce government revenues on productive investments like infrastructure rather than handouts. Others argued that social sector spending was an investment in a healthy and productive workforce. The former camp hoped, and the latter feared, that the Modi government would reverse the UPA’s policies.

This has turned out to be largely untrue, but it should not surprise anyone.

The BJP is right wing only in the social and cultural sense; it does not resemble the Tories or Republicans in economic philosophy. Most of its schemes are actually UPA’s, (like the Nirmal Bharat Abhiyan or the Swabhimaan campaign) trotted out under new names with greater publicity and some tinkering.

Changes in design or budget have been incremental rather than sharp breaks, no matter how much critics and supporters exaggerate the difference.

This, in itself, is not to the government’s discredit. The UPA’s grand schemes often failed to deliver what they promised, and if the Modi government can simply take them up and make them work better, it can confidently go back to voters for another mandate. Its style of governance in the last two years does raise some questions, though.

Are targets being achieved?

First, there is an obsession with numbers and targets, but the focus seems more on inputs rather than outputs. So many toilets have to be built, so many bank accounts opened and so many people enrolled by such date. Government websites brag about being in the Guinness Book of World Records!

The problem is that in India inputs often do not translate into outputs. Studies show many people continue defecating in the open even after gaining access to government-built toilets. Many new bank accounts could be duplicate or dormant (even a year after launch, nearly half the accounts opened under JDY, Jan Dhan Yojana, were zero balance, though it has since dropped to a quarter). Is the government mistaking action for achievement?

Second, there is a tendency to cherry pick numbers, use them out of context and paint a rosy picture of progress. All governments spin but this government spins at a dizzying rate. This would not be a big problem, but what if it begins to believe its own hype.

Take one example. People’s lack of access to insurance and credit is the biggest cost of financial exclusion. Official publicity for JDY has made a big deal of the insurance and Rs. 5,000 overdraft facility bundled with the accounts. However, a closer look shows the benefits are temporary and strict qualification criteria eliminate most participants (of the nearly 220 million accounts opened so far, only about 3.5 million are sanctioned for the overdraft facility). True financial inclusion is impossible without the kind of fiscal commitment the UPA was often criticised for. Is the government making a distinction between publicity and reality? 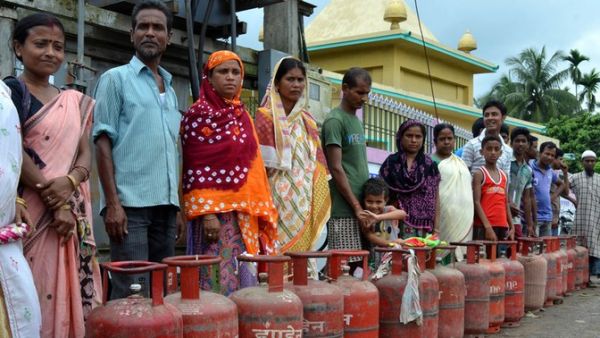 People queue-up to refill their LPG cylinders in Nagaon district of Assam on June 16, 2015. (Photo: IANS)

Third, the Prime Minister is quite exceptional in his use of moral suasion and exhortation as an instrument of policy, a product perhaps of his RSS (Rashtriya Swayamsevak Sangh) roots. Our elected leaders do not seem to use the bully pulpit enough – deep rooted social problems like open defecation or discrimination against girls require changing attitudes and values, not just budgetary allocations. This approach has paid some modest dividends, for example in the voluntary surrender of the LPG subsidy.

Nevertheless, one wonders if the government sees appeals to duty and citizenship or mission mode alertness as a substitute for funding or smart policies. The Swachh Bharat mission statement estimated the need for Rs. 270 billion a year, but the Modi government’s first budget gave it only Rs. 42 billion (raised to Rs. 90 billion in the last budget – still way short).

Selfie-with-daughter or celebrity advocacy gives Beti Bachao, Beti Padao a much-needed boost, but unless genuine policy innovations like Nitish Kumar’s bicycle scheme are introduced, our abysmal record on gender is unlikely to improve much.

Focus on health and education

Perhaps the most important concern is this. India’s health and education indices are terrible – nearly 40% of children under five years are stunted and according to ASER, (Annual Status of Education Report) 52% percent of kids in Class 5 cannot read a Class 2 text. This is a product of both inadequate spending and lack of accountability. The UPA, notwithstanding its big push in the social sector, focused more on things that provide quick and easily noticeable benefits to voters – subsidised rice, jobs, reservations, loan waivers.

Improving the health and education infrastructure is time-consuming and voters may not even notice it much before the next election comes around. The most critical tasks in social sector reform were therefore ignored. It seems the Modi government, with its penchant for quick results, flashy announcements and eye for votes, is not very likely to change course.

This article first appeared on The Quint: http://www.thequint.com/opinion/2016/05/31/missing-the-target-ndas-not-so-rosy-report-card-on-social-policy-beti-bachao-beti-padhao-pahal-scheme-upa-government