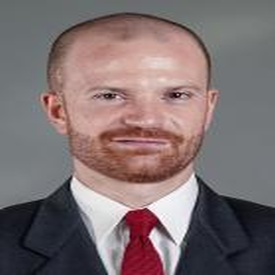 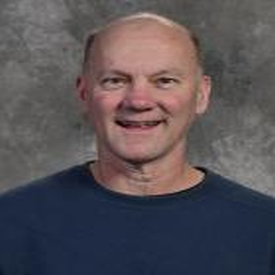 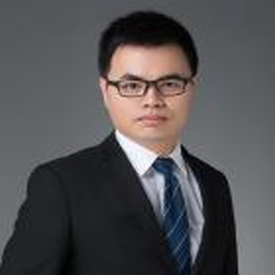 The conventional perception, that US Federal Reserve rate hikes necessarily imply capital outflows from emerging markets, is an incomplete assessment. This article disaggregates US Fed hikes’ effects on investor’s allocations based on whether these were exogenous shocks or take into account a better economic outlook. Exogenous monetary policy shocks have conventional, negative effects but if the Fed tightening cycle is driven by expectations of stronger growth, it does not cause outflows from emerging market funds.

In the aftermath of the Global Financial Crisis, massive unconventional measures employed by the Federal Reserve (henceforth, the Fed) triggered debates about the consequences of flooding the world with liquidity. A significant adverse consequence of this unprecedented monetary expansion was the taper tantrum in 2013, when the Fed expressed a plan to gradually taper its balance sheet in the future, which was followed by turmoil in emerging markets (EMs). Similar concerns have arisen since the outbreak of the Covid-19 pandemic when the Fed restored many unconventional policies (Kalemli-Ozcan 2019, 2020), and will surely continue to be on the minds of investors and EM central banks as the Fed begins a new round of tightening.

In a recent study (Ciminelli et al. 2022), we revisit the role of US monetary policy in influencing investors’ allocations into and out of international mutual funds – a key driver of cross-border capital flows.

The importance of Fed private information was emphasised by Romer and Romer (2000) and further analysed by Nakamura and Steinsson (2018), among many others. Our study is the first to make use of this decomposition to analyse capital flows.

We find a pure US monetary policy shock to have conventional, negative effects on international mutual fund investment. This can be seen in Figure 1, which shows the effect of a 10-basis-point1 Fed pure monetary policy shock on investors’ allocations into US, global, and EM mutual funds (measured in percentage points of assets). A tightening shock has negative and persistent effects on allocations into all these types of funds. These effects are largest and more precisely estimated for EM funds. Four weeks after a 10-basis-point shock, flows to EM equity and bond funds are estimated to be about 0.3 and 0.6 percentage points lower, respectively. The same shock has smaller but still statistically significant negative effects on flows to global equity and global bond funds. The response of flows to US funds is similar but less precisely estimated. Overall, these results confirm earlier findings that EM flows are particularly sensitive to US monetary policy (Chari et al. 2020). 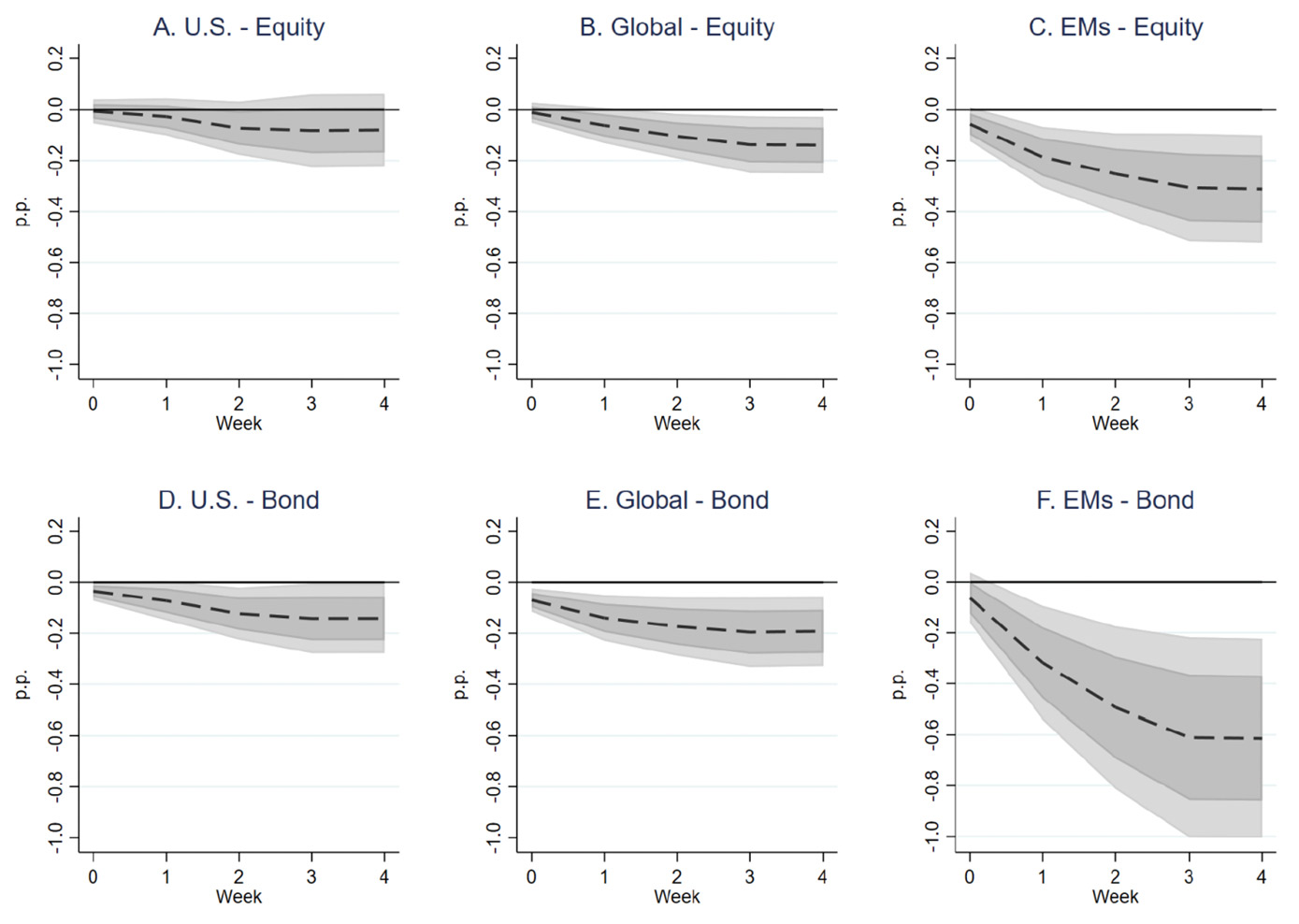 Notes: i) The figure reports the effect of a 10-basis-point positive pure monetary policy shock on allocations into mutual funds over a five-week window, including the week of the shock and the four following ones. ii) Dashed black lines report point estimates. iii) Deep and shallow grey areas are 90% and 68% confidence bands. iv) X-axes denote the response horizon (in weeks), with 0 being the week of the shock. v) Y-axes denote the magnitude of the response (in percentage points of fund assets).

The effect of positive information shocks on investment

On the other hand, information shocks have distinctly different effects. As displayed in Figure 2, a positive shock, indicating higher interest rates against the backdrop of a better economic outlook, does not cause outflows from EM funds, and leads investors to reallocate capital out of safe US bond funds and into growth-sensitive US and global equity funds. 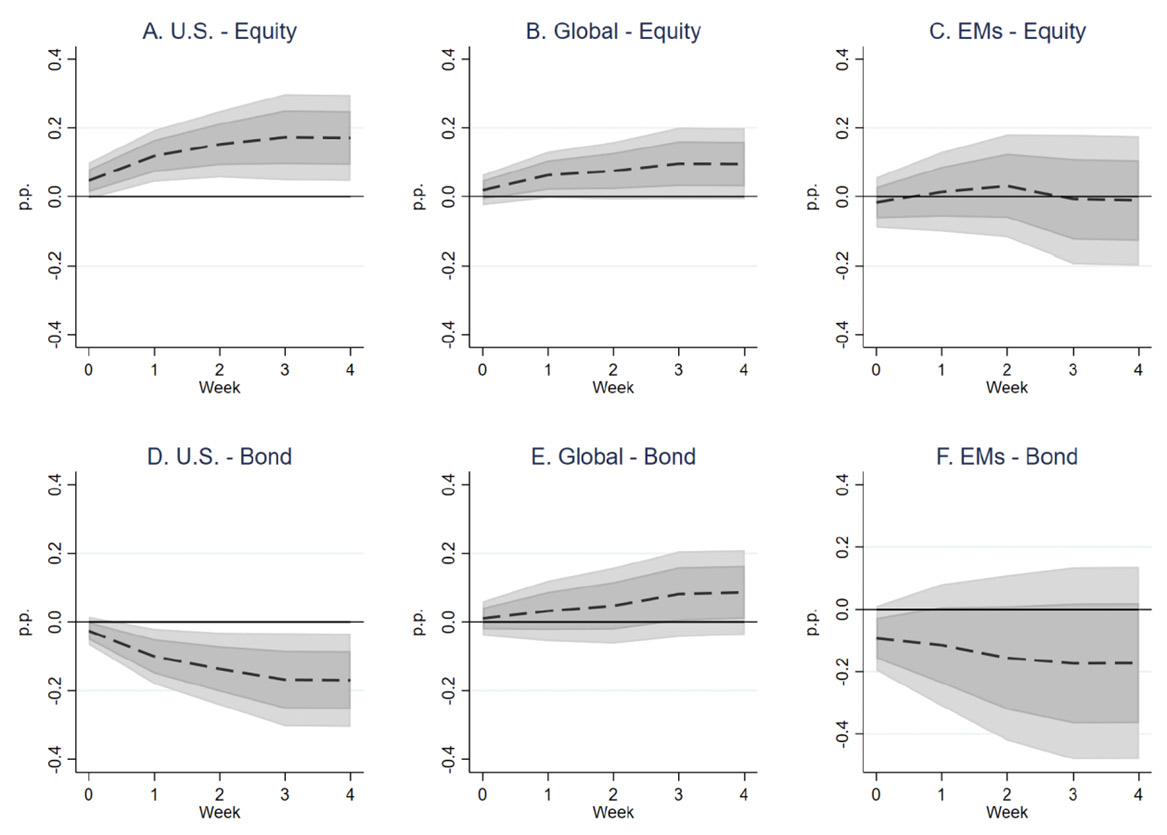 Notes: i) The figure reports the effect of a 10-basis-point positive information news shock on allocations into mutual funds over a five-week window, including the week of the shock and the four following one. ii) Dashed black lines report point estimates. iii) Deep and shallow grey areas are 90% and 68% confidence bands. iv) X-axes denote the response horizon (in weeks), with 0 being the week of the shock. v) Y-axes denote the magnitude of the response (in percentage points of fund assets).

These contrasting results suggest the possibility that analysis of monetary policy shocks without separating the information component may lead to downplaying the importance of Fed monetary policy for international mutual fund investment. To check this, we follow Nakamura and Steinsson (2018) and use a composite measure of unanticipated changes in monetary policy news obtained over the 30-minute window around Federal Open Market Committee monetary policy decisions. 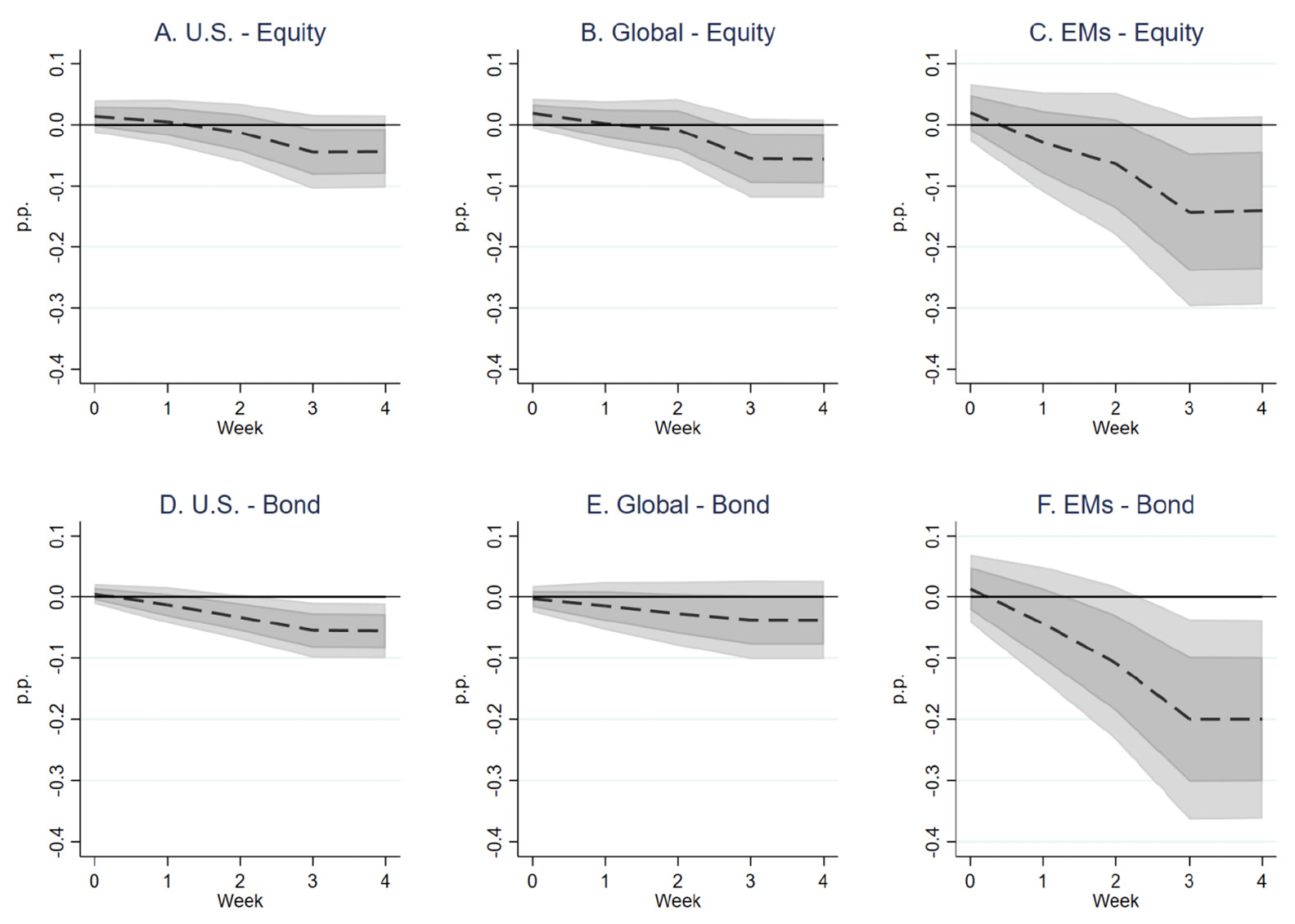 Notes: i) The figure reports the effect of a 10-basis-point monetary policy news shock on allocations into mutual funds over a 5-week window, including the week of the shock and the four following one. ii) Estimated without separating pure monetary policy and information news shocks. iii) Dashed black lines report point estimates. iv) Deep and shallow grey areas are 90% and 68% confidence bands. v) X-axes denote the response horizon (in weeks), with 0 being the week of the shock. vi) Y-axes denote the magnitude of the response (in percentage points of fund assets).

Our results indicate that an exogenous tightening of US interest rates (pure monetary policy shock) is bad news for EMs, but one that is driven by an upward revision of the economic outlook (information shock) is not. How can we explain these results? The literature postulates the existence of three main transmission channels of US monetary policy for international capital flows: the portfolio-rebalancing channel, the risk-taking channel, and the exchange rate channel (Bruno and Shin 2015, Chari et al. 2020).

According to the portfolio-rebalancing channel, investors shift their portfolios towards high-yield EM assets when global interest rates are low and hence investing in long-term advanced economies bonds generates meagre returns. The opposite holds when the Fed tightens policy and interest rates rise. A tightening in interest rates that increases uncertainty makes investors more reluctant to take on risky positions, which should lead to capital outflows from EMs and other risky funds. The risk-taking channel operates through the effect of US monetary policy on investor’s risk aversion (Bruno and Shin 2015). Finally, the exchange rate channel depends on the direct effect of the Fed's policy on the US dollar exchange rate, with an appreciation of the dollar leading to capital outflows from other countries, especially EMs.

We find evidence suggesting an important role for the risk-taking channel. Pure monetary and information shocks both increase nominal and real interest rates, leading us to downplay the portfolio-rebalancing channel as the main driver of our results. However, as shown in Figure 4, the effects of these two shocks on risk taking are sharply different.

Figure 4. Effects of Fed's shocks on risk aversion and uncertainty 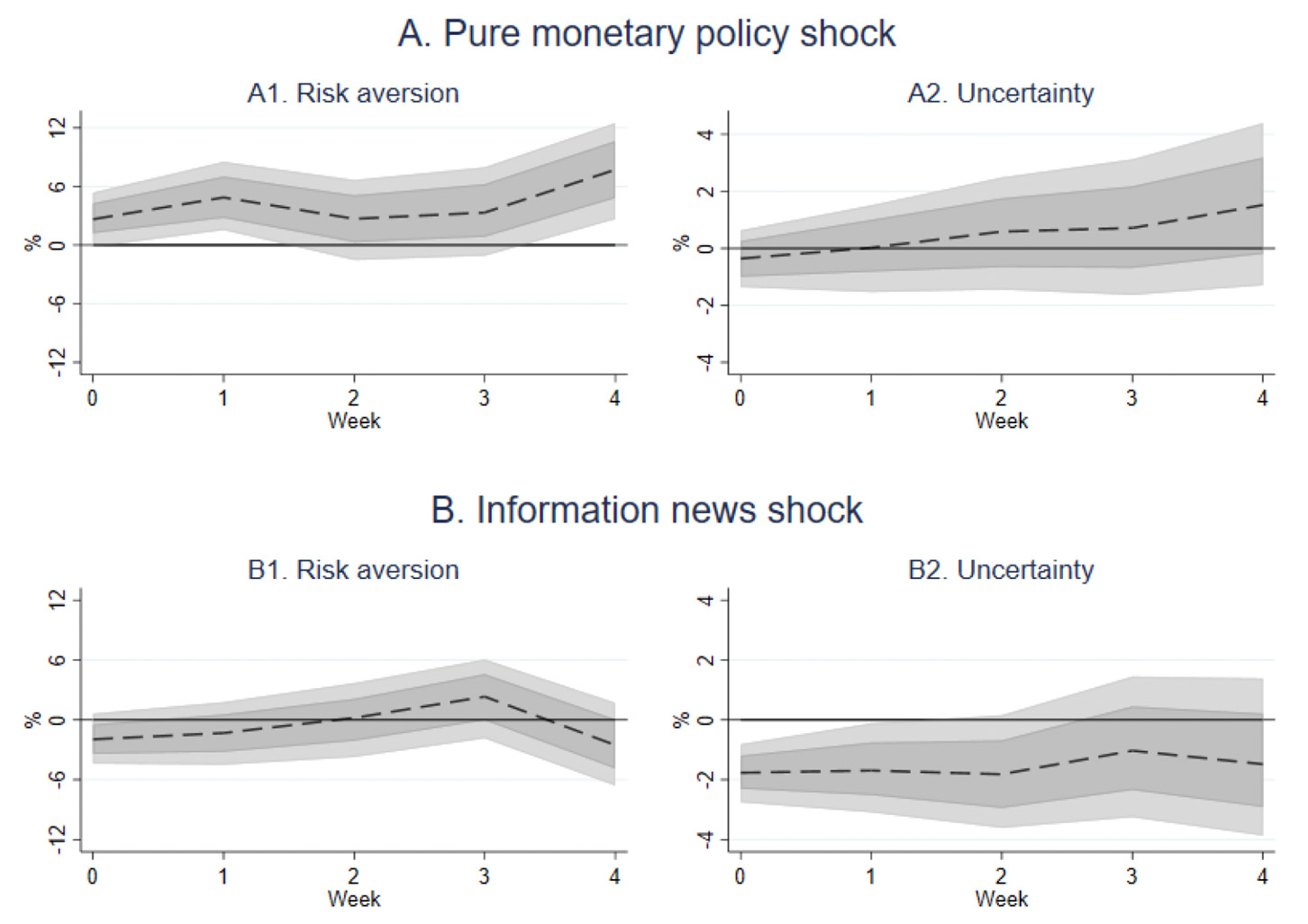 Notes: i) The figure reports the effect of a 10-basis-point pure monetary policy and information news shock on risk aversion and uncertainty. ii) Dashed black lines report point estimates. iii) Deep and shallow grey areas are 90% and 68% confidence bands. iv) X-axes denote the response horizon (in weeks), with 0 being the week of the shock. v) Y-axes denote the magnitude of the response (in percentage points of fund assets).

On the other hand, the decrease in uncertainty following positive information shocks – consistent with the information effect – neutralises the negative effects of higher interest rates in the US, on higher-yielding assets in EMs. This explains why investors shed riskier assets following pure monetary policy shocks but not when receiving information shocks.

The important role of the risk-taking channel in driving our results is confirmed when we zoom in on the vast universe of US bond funds. We find that investors sell shares of funds investing in US corporate bonds, and buy those of funds investing in safe-haven long-term Treasuries after an increase in interest rates driven by a pure monetary policy shock. Instead, when interest rates increase following a positive information news shock, investors sell long-term Treasury funds and increase allocations into high-yield bond funds.

In our study, we show that the evidence on the exchange rate channel is mixed. The price of the US dollar shoots up (that is, the dollar appreciates) following pure monetary policy tightening shocks, while it exhibits a qualitatively similar but weaker and more sluggish response after positive information shocks. Hence, the exchange rate channel seems to work in the same direction as the risk-taking channel, but it cannot explain why investors also marginally reduce their positions in US funds after pure monetary policy shocks. This instead can be rationalised with an increase in risk aversion.

We also perform some extensions to these core results. We first exploit information on funds' domicile to explore heterogeneities in the response of US and EM investors. US investors sharply decrease exposure to EM assets following a pure monetary policy tightening. This decrease in foreign capital in EMs is partly mitigated by EM investors themselves, who increase flows into EM funds.

These results are consistent with home-bias behaviour following heightened risk aversion and more generally suggest that monetary policy tightening shocks in the US cause a decrease in foreign capital. We confirm this intuition in our study by using country-level data on cross-border flows taking place through investment funds. Fed monetary policy tightening shocks lead to a general decrease in foreign inflows, particularly debt. Although larger in EMs, this decline in foreign capital also affects the US and other developed markets. On the other hand, positive information shocks cause inflows of foreign capital into US equity assets, in line with the news of a stronger economy.

These results beg the natural question of what could be done by EM debt issuers to mitigate the decrease in foreign capital following the Fed’s monetary policy tightening shocks. To investigate, we leverage information on bond funds’ investment mandate. Bond funds differ along several dimensions, including credit quality, currency denomination, and issuer of the bonds in which they can invest. These may affect the response of investors following US shocks.

We find that credit quality and currency denomination are important. Other things being equal, outflows from funds investing exclusively in investment grade bonds are about half as a large as outflows from other funds, following a tightening pure monetary policy shock. At the same time, funds which can invest only in hard currency (Swiss Franc, Euro, Pound, US Dollar, or Yen) bonds suffer much larger outflows than local and mixed currency funds. This result has important policy implications as it suggests that, by issuing debt in local currency, EM issuers may decrease exposure not only to exchange rate fluctuations but also to changes in risk aversion following shocks to US monetary policy.