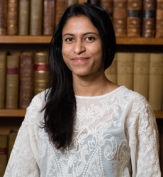 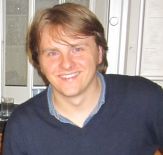 In an attempt to deter child marriage, a recent Supreme Court verdict has criminalised sexual relations between a man and minor wife. Worldwide, more than 700 million women alive today were married before their 18th birthday, and one in three child brides are in India. Analysing data from the India Human Development Survey, this article demonstrates that strong State capacity can play a significant role in reducing child marriage.

Child marriage, a widespread problem in the developing world, is a major human rights violation that disproportionately affects young women1. Child marriage casts a long shadow not only on the young woman's life but also on that of her children. Worldwide, more than 700 million women alive today were married before their 18th birthday. Moreover, the dismal rate of progress in reducing child marriages is outpaced by population growth. Despite legal requirements in most developing countries that fix the age at marriage to be 18 for women, one in nine young girls worldwide are married off before age 15 (UNICEF, 2014).

This suggests weak policy and law enforcement by the State, an aspect that has surprisingly remained unexamined. The emphasis is on cultural beliefs and gender norms that sustain the practice of child marriage, and limit the scope for policy intervention. By examining the role of the State, our research shifts the focus towards the State’s ability to implementing its policy throughout its territory. We argue that women who live in regions with stronger State capacity have lesser chances of being married as child brides (Goyal and van Noort 2017).

We focus on the Indian context, a country with the highest absolute number of child brides in the world. Despite, India's long-standing, vocal commitment to end child marriage, as well as legal amendments that have raised the marriage age for women over three times in a century, one in three global child brides are in India. Towards this end, we examine the relationship between State capacity and woman's propensity to marry before the nationally-set legal age of 18 years, across Indian states (Goyal and van Noort 2017).

Using micro-level survey data from the India Human Development Survey (IHDS) for the year 2012, we find that a woman living in a region with greater State capacity has a significantly lower probability of becoming a child bride (Desai and Vanneman 2016). We measure State capacity along two dimensions: coercion, and care. We find that the relationship between coercive State capacity and child marriage is substantive, and alone explains 53% of subnational variation, while, caring State capacity has no effect.

Our main sample consists of women between 18-28 years of age as of 2012, that is, young millennials, born during 1984-1994. These women grew up in the economically expanding and well-established democracy of India. Yet, we find that even in this recent sample, 22% of women are married before 18, with an average age at marriage of 15.3 years across 20 large states2. 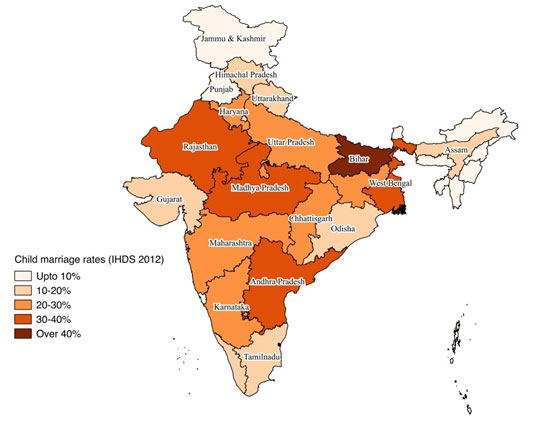 Like previous studies, we find substantive within-country variations in India (see Figure 1). This phenomenon is not unique to India and is shared by many other countries in West and Central Africa and Latin America. These within-country variations are substantive and continue to puzzle policymakers (International Center for Research on Women, 2011).

We focus on two core aspects of State capacity. The first is coercive State capacity, which we define as the capacity of the State to coerce citizens to abide by its laws and regulations. We measure this as the average number of police officers per 100,000 inhabitants between 2005 and 2012. We find that the Indian police are severely understaffed as per global standards. India has, on average, 159 policemen per 100,000 inhabitants, and there is almost no change in staffing trend over time3. The subnational picture in India is even more striking, with a range from 64 in Bihar to 1,044 in Mizoram (a border state with separatists/insurgency movements). This severe level of understaffing of police in India is in line with the criticism of the archaic view that India's bureaucracy is bloated (Vaishnav 2016).

The second dimension we examine is caring State capacity, that is, the capacity of the State to effectively deliver public services that empower and inform vulnerable societal groups, such as adolescent girls and pregnant women, against child marriage. We measure this dimension of State capacity by two variables: (a) the average quality of Anganwadi centres4 (AWCs); and (b) average number of AWCs per 100,000 inhabitants, from 2003 to 20115. AWCs are centres for mother and childcare in rural India, which are also responsible for implementing programmes that seek to raise awareness about child marriage among teenage girls and their parents. Importantly, these centres have the duty to inform the police about probable or planned child marriages.

The importance of an effective State

We find three important results. On examining women with similar individual and household characteristics, we find that significant difference (about 10%) in child marriage rates exists at the state level, and therefore, can only be explained by contextual factors that vary across states.

Second, an increase of 85 police officers per 100,000 (one standard deviation6 ) leads to, on average, a 32% decrease in the probability of a woman being married before attaining 18 years of age. This is the equivalent of a 7.3% decrease in average state-level child marriage rates with every standard deviation increase in coercive State capacity. Coercive State capacity, even in several robustness checks, is always statistically significant, and explains more than 53% of all (macro) differences in child marriage rates across our sample of large Indian states. The decline is stronger for the most at risk girls as compared to the common Indian woman (see figure 2)7.

Figure 2. Decline in probability of child marriage for most common and at-risk woman with increase in coercive State capacity 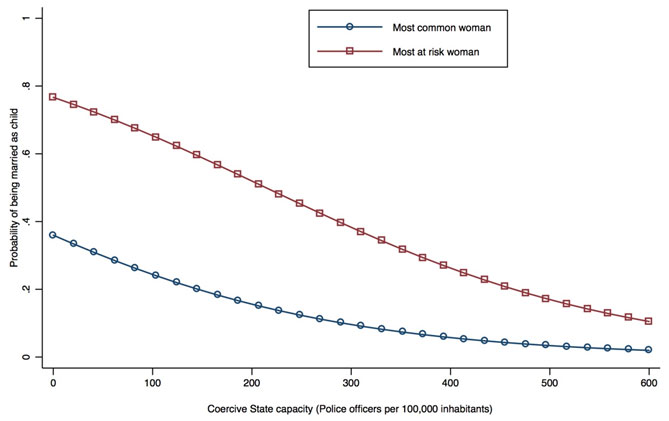 Third, the caring dimension of State capacity is neither strongly related to child marriage nor explains much variation in it across states. This is a surprising finding. Nevertheless, this ties in with qualitative research that find that AWCs need reform, and in their current form are overburdened and inefficient. Anganwadi workers have been found to be too close to the communities they serve to remain impartial, or face social sanction when they go against their communities, while some may even reinforce norms that promote child marriage (Jha 2016).

These findings are robust to controlling for factors such as proportion of state area that was under direct or indirect colonial rule, ethnic party in legislature, corruption, presence of natural resources, social capital, and regional cultural norms − variables that are plausibly related to both coercive State capacity and child marriage. The results are robust to many alternative samples: including all 33 states and union territories, except Andaman and Nicobar and Lakshadweep); excluding Muslim women; excluding Jammu & Kashmir, and so on.

Lastly, we identify the causal effect of coercive State capacity on child marriage by exploiting the fact that some Indian woman are exposed to significantly higher police presence because they live in a state with insurgency/independence movements. The identifying assumption is that insurgency movements do not have a direct effect on child marriage. Since we possibly cannot assign State capacity randomly, this is, in our view, the most convincing evidence possible for the hypothesised relationship. We find that Hindu women that live in such states are significantly less likely to be married before turning 18, as compared to similar Hindu women in other regions.

Busting the myth that legislation cannot solve the problem of racial segregation, Martin Luther King Jr., in one of his addresses in 1963, stressed, that, “While morality cannot be legislated, behaviour can be regulated. And that while judicial decrees may not change the heart, they can restrain the heartless.” Reinforcing his observation, in the context of India, we find that coercive State capacity plays a significant role in reducing the probability of a woman being married as a child bride.

Our findings are broadly applicable to other contexts and stand in contrast to the singular emphasis in policy research on the role of individual-level socioeconomic characteristics or cultural and gender norms in shaping incentives to marry off daughters in childhood. To be clear, we are not implying that these factors are unimportant; our analysis suggests that addressing child marriage is much more of a law enforcement problem than is widely believed, and that governments are well-advised to pay more attention to law enforcement in this context than they have done in the past.

Our findings also speak to the dominant institutional literature that examines the role of State capacity in a host of macro outcomes, such as economic growth, civil wars, human rights, and so on (Acemoglu et al. 2015). We contribute by showing that State institutions have a deep impact on very private behaviours of individuals. To understand exactly how State capacity is related with child marriage, we need surveys designed to study citizen’s interaction with State institutions. Our study strongly suggests that this exploration is necessary and worthwhile, given the gravity of the matter at hand.