When Chief Ministers come to power in India, they extensively reshuffle civil servants postings. This column asks why state politicians transfer bureaucrats, whether they favour loyalty over competence, what this means for the administrative efficiency of the Indian state, and what can be done about it.


Within an hour of being named Chief Minister of Uttar Pradesh in March 2012, Akhilesh Yadav had reshuffled the bureaucrats who served in the Chief Minister’s secretariat. In his first month as the Chief Minister, more than 1,000 officers of the state’s administrative and police services had been moved to new positions. Officers who were perceived to be ‘loyalists’ of the previous Chief Minister, Kumari Mayawati, were moved to less prestigious posts. In his swift and large-scale reappointments of career bureaucrats, Mr Yadav exceeded the record set by his predecessor, who had transferred more than 1,000 officials in her first six months as Chief Minister in 2007. While transferring bureaucrats from department to department is nothing new in India, the above case illustrates how acute an issue it has become. Why do Indian politicians engage in such widespread transfers of bureaucrats? How does such behaviour affect the career incentives of bureaucrats and what does this mean for ‘administrative efficiency' - or more simply, getting things done in India.

Evidence from the Indian Administrative Service

In recent research we set out to answer these questions by looking at data on the careers of 2,800 officers in the Indian Administrative Service (IAS) over the period 1980 to 2004 (Iyer and Mani 2012). IAS officers are recruited using a nationwide exam. Once recruited, IAS officers are assigned to specific states, where they serve for the majority of their careers. State-level politicians in India cannot hire, dismiss, demote or change the wages of IAS officers. But they can, and do, transfer bureaucrats quite regularly - especially more so since the 1990s. In our data, IAS officers spend on average only 16 months in any specific post; they have a 53% probability of being appointed to a new position in a given year. Uttar Pradesh is by no means unusual in the matter of Chief Minister-led transfers: we find that a change in Chief Minister leads to a 5 percentage point increase in the probability of bureaucrat transfers across all states of India. Figure 1 below illustrates this dramatically for the state of Tamil Nadu: the vertical lines indicate years in which a new Chief Minister came to power in the state. 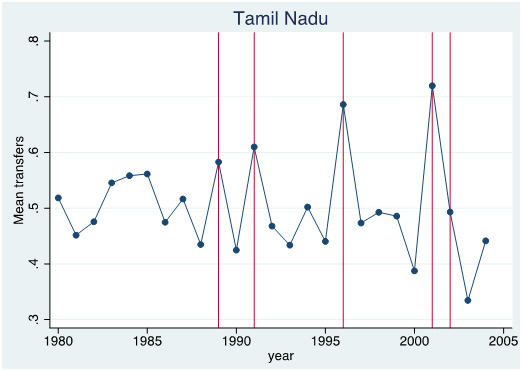 We hypothesise that this transfer process is essentially an outcome of the politician's incentive to control how policy is implemented. After all, elected politicians are very likely to have different incentives than appointed career bureaucrats. Politicians are more likely to have a shorter horizon in their decision-making, and they are likely to take into account their chances of getting re-elected when they come to deciding where to allocate public goods, such as schooling or healthcare. Bureaucrats, by contrast, are unaccountable to the wider public and are appointed, with a high degree of job security. Ensuring accountability in policy implementation while avoiding politicisation is a difficult problem. In India, the favoured means for politicians to exert control over policy outcomes is to reshuffle the bureaucracy to ensure that his or her favoured bureaucrats are appointed to key positions.

What do such motivations imply for the pattern of bureaucrat transfers? Consider a setting where there are two parties (Party A and Party B). Bureaucrats can make two choices in their careers: they can choose to develop a reputation for (politically neutral) policy expertise, referred to henceforth as a highly skilled officer, or a reputation as a loyalist to either party. Their choice affects the degree of control that a politician has over policy outcomes. A typical example of this is a scenario where funds have been earmarked for the construction of say, seven schools in a district. A bureaucrat who is loyal to the politician in power would agree to build all the schools in areas preferred by the latter, whereas one who is loyal to the opposition party may disagree entirely on where the schools should be located in the district. A highly skilled officer with a reputation for expertise, on the other hand, would base his or her decision on a judgment of where the schools are most needed. As a result, he or she may end up allocating resources to some areas preferred by the politician, but not all of them. The trade-off faced by the politician is that highly skilled officers are more productive than loyalists but they have less control over them. In our schools example, this greater productivity could mean schools of greater quality or schools built quicker and at a lower cost.

Hypothesis 1: As long as there are some loyalists in the bureaucracy, political change will lead to bureaucrat transfers.

Hypothesis 3: A high-skilled officer is less likely to be shunted in and out of important posts following political change, than loyalist officers, that is, across his various postings, there will be smaller differences in prestige and importance.

Bureaucrats' incentives: Does it pay to suck up?

What does this imply for bureaucrat career incentives? The major factor here is that developing a reputation for loyalty is an alternative way to achieve prestigious positions, which is what bureaucrats tend to care about. Therefore, not all bureaucrats will choose to develop expertise - again, an efficiency loss to society. In particular, we surmised that bureaucrats with higher initial ability will find it easier to focus on becoming a highly skilled officer (Hypothesis 4). But over the course of their career, they may not be more likely to secure important posts. Based on our detailed conversations with several IAS officers, we classified the following departments as 'important' (out of a list of 50 departments): excise and sales tax, finance, food and civil supplies, health, home, industries, irrigation, public works and urban development.

Are these predictions borne out by the data? As we mentioned before, the presence of a new Chief Minister increases bureaucrat transfer probability by 5 percentage points (Hypothesis 1). Interestingly, this is similar whether or not the Chief Minister comes to power as a result of fresh elections or not. Consistent with the idea that a bureaucrat's loyalty is likely to be partly to the party and partly to the politician personally, we do find a bigger increase in bureaucrat transfers when the new Chief Minister is from a different party than the previous one (7.6% increase compared to a 3.7% increase).

We collected information on indicators of initial ability (initial rank of the officers within each cohort, after their recruiting exam and initial training), investments in skill (the number of weeks they spend in domestic and foreign training), and whether they are 'empanelled' after 20 years of service – a recognition widely regarded as a signal of superior competence. In line with Hypothesis 4, we find that officers of higher initial rank invested more in raising their skills: Those rated in the top 20 in their cohort underwent two additional weeks (12% more) of foreign training, and have a 14% higher probability of being empanelled.

What about transfer patterns of such officers? Officers of higher initial rank (the ones more likely to become highly skilled experts than loyalists) are more immune to political change. When a new Chief Minister comes to power, an officer in the top 20 of his/her cohort faces an additional transfer probability of 1.8% - compared to a figure of 4% among lower-ranked officers (Figure 2). For the latter group, about half of this increased transfer probability is because of movements from important positions to unimportant ones (or vice versa), while the top-20 officers have a zero probability of such movements with a new Chief Minister. These findings are exactly in line with our first three hypotheses. 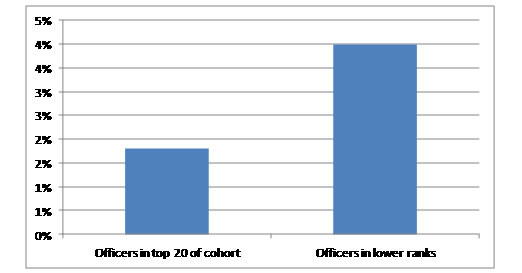 Finally, we show explicitly the existence of the ‘loyalty’ track using data on the caste of officers in the Uttar Pradesh and Uttarakhand cadres. An officer who belongs to the same case as the Chief Minister’s party caste base increases his or her probability of obtaining an important post by 7%. Strikingly, we find that the average importance of posts over the entire career span is not higher for high-skill officers, which shows that investment in loyalty rather than expertise is rewarded amply within the Indian bureaucracy.

Our results imply two possible sources of social inefficiency arising from the phenomenon of politician-induced transfers: not all important posts are given to highly skilled officers, and not all bureaucrats have sufficient incentives to invest in expertise. A few years ago, a Public Services Bill was drafted, which proposed explicit limits on the ability of politicians to transfer bureaucrats frequently. Our analysis suggests that such limits will strongly improve bureaucrats’ incentives to choose investment in expertise rather than loyalty as the path to career success. This is distinct from potential positive effect of greater administrative continuity on administrative efficiency. However, during initial consultations regarding the bill, only 11 states agreed to have a minimum two-year tenure for key bureaucrats (like District Collectors), and 10 states refused outright.

As mentioned above, we find that the transfer rates have noticeably increased in the 1990s. It is well known that there have been significant changes in the Indian political landscape during that decade. This suggests that it may be important to understand the link between the nature of political competition and bureaucrat transfers. Our initial results indicate that not all political parties are the same, when it comes to transfers: Regional party Chief Ministers are dramatically more likely to transfer bureaucrats than those from a national party (10% vs 4%). We are currently conducting a deeper examination of the incentives of politicians to transfer bureaucrats, with a view to explaining these variations in transfer behaviour across political parties.