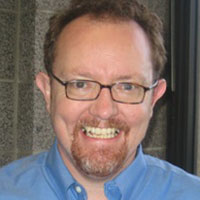 This column seeks to understand the effect of violent conflict on a country’s subsequent political and economic development. It argues that measuring post-conflict effects is extremely challenging due to data and other methodological concerns. Using a new methodology and data from the Partition of India, it shows that there is a relationship between a group’s combat exposure and subsequent political activities such as ethnic cleansing, however this depends on the relative sizes of various groups and the specific context of the state.

What effect does being involved in violent conflict have on a country’s subsequent levels of political engagement, economic development and conflict? What about the impact on the lives of the many individuals who volunteer or are drafted into the military or guerrilla forces? With all the civil wars and larger conflicts that have taken place over the past century, this is potentially a big issue for anyone interested in politics and development. Is it a coincidence that demobilised veterans were behind some of the biggest political shocks to colonial rule in West Africa, such as the Accra riots in 1945 that began the road to Ghanaian independence, or the mass vote against French rule in Guinea in 1958? And what effect will the eventual mass demobilisation of soldiers after current civil wars in Syria, and Afghanistan as well as the long-running insurgencies in Kashmir, and tribal areas of India have on those countries’ economic and political futures? Will we see more violence among the general population or less? Will veterans be happy to return to their fields and businesses, or will they demand new rights and opportunities, as they did after World War I?

Measuring the effects of war is tricky

Answering these questions is tricky. Partly because countries, armies and soldiers (the ones who volunteer, anyway) tend to pick and choose their wars. So if we see particular levels of crime and violence after a war, it is hard to disentangle whether these are the effects of war, or whether these reflect the underlying factors, such as poverty, grievance or inequality, that may have led to a state or individual soldiers to enter the war in the first place. And that’s before we even get to all the other things that might be connected to post-war levels of crime and violence...

To get around all these tricky issues, the best studies of this topic have therefore been those that take advantage of those cases where the assignment of soldiers to combat is more or less random, which allows us to get a good estimate of the effects of war by comparing those who serve with similar groups that do not. Joshua Angrist, for instance, in a famous study published in 1990, compared the experience of soldiers in the USA who were drafted into combat during the Vietnam War with those who stayed at home. Other studies (Blattman 2009, Bellows & Miguel 2006) have attempted to find randomness elsewhere, whether in the relative victimisation within villages in Sierra Leone or in child soldiers close to the desirable age in Uganda.

Perhaps the most surprising thing to come out of these studies is that veterans don’t appear to be too badly affected by their experience of war, as measured by factors such as earnings or participation in democracy. The Angrist study showed that veterans did a bit worse overall than non-veterans, but not once we account for all the work experience and education that veterans missed out on by serving overseas. Other studies have found similar patterns, with victimised or recruited groups appearing more likely to engage in positive behaviours such as voting or participating in civic groups.

These studies, often based on self-reported surveys, have shed very valuable light on the role of veterans in environments recovering from conflict. However, precisely because surveys are hard to implement in actual conflict zones, the relatively benign effects of combat experience that are more likely to emerge in times of post-conflict reconstruction tell us less about the role veterans may play in subsequent crises and violent upheavals.

In a forthcoming paper, my co-author Saumitra Jha and I try out a new method that we argue can allow us to assess the effects of combat exposure in both subsequent conflicts and in peacetime. We take advantage of the fact that many armies, even if they don’t recruit randomly, do tend to deploy troops interchangeably once they’ve been recruited, assigning some units to lots of combat, while giving others a more relaxing time of it. These differences may emerge out of local military needs – troops just happen to be in the right place at the right time – or due to enemy action, such as the diversion of Indian troops in World War II from deployment to fight in the long campaign against Rommel in Africa to instead fight in the short and unsuccessful defense of Singapore.

If we can gather lots of data on who served and how much combat they were in, we can work out what the effect of being in lots of combat might be on veterans’ involvement in political movements or other organisations after the war. Our central idea here is that frontline experience in wartime gives people a variety of skills and organisational capacities that enables them to take a more active role in coordinating collective action, particularly in subsequent crises. When faced with an existential crisis – like during the Partition of India – Indian veterans had the skills and capacity to take action to try to defend themselves, and to ensure that their community, not the rival community, would have future control over the district and its public goods. The greater the organisational skill gained in combat available to a community, the more they could ensure this outcome by forcing the other community to migrate out and also encourage their own community to migrate in. That’s the idea, anyway.

The particular case we’re interested in explaining is the massive ethnic cleansing that accompanied the Partition of India in 1947. This was a big and important event by any standards – more than 14 million people had to flee their homes, according to data collected by Bharadwaj, Khwaja and Mian (Bhardwaj et al 2008). Bharadwaj et al show that the scale of violence in the cleansing was so big that there were more than 3 million ‘missing’ people in India by the time the 1951 censuses were conducted.

What we do first is work out where India’s soldiers fought in World War II, and then use casualty data to match this wartime unit history to each of India’s pre-partition districts, so for each district we can estimate the average months of wartime front line exposure among all units from that district.

Figure 1 shows what that casualty picture looks like, and Figure 2 shows the related district map of combat exposure during the war 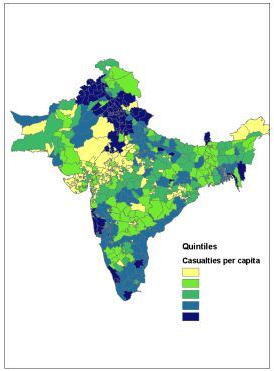 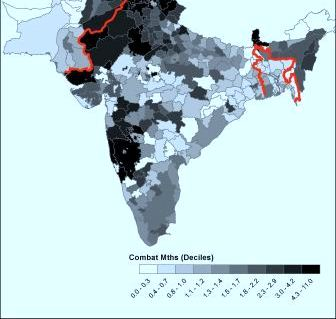 As we can see, the traditional ‘martial class’ regions such as Punjab and North West Frontier Province (NWFP) that provided the bulk of the colonial army had very high exposure to combat and a high numbers of casualties. But we can also see that even within these regions there was a lot of variation, and also that many other regions of the country, such as the former provinces of United Provinces, Bombay and Madras, had at least some districts where soldiers spent many months in combat or had a lot of casualties.

Crucially for our natural experiment, differences in the combat exposure of units deployed at the same time seem to be unrelated to a broad range of pre-mobilisation factors either associated with economic migration or with violence. These include pre-mobilisation levels of crime, murder, the presence of allegedly ‘martial’ groups, or levels of previous ethnic violence in a district that we might be concerned would be related to both wartime experience and levels of ethnic cleansing during partition. It’s also not the case that the army ‘learns’ about the martiality of some army units –especially perhaps those recruited early in the war--and deploys them to much more conflict than others.

The next step we take is to see whether those areas with more veterans who had served at the frontline had higher levels of ethnic cleansing during the Partition, and whether these patterns differ with the minority size and whether the minority or the majority were the likely beneficiaries of the combat experience. The map we created, see Figure 3, showing the pattern of ethnic cleansing (using Bharadwaj et al’s census data) looks like this:

Figure 3: India: Levels of Ethnic Cleansing as a result of partition 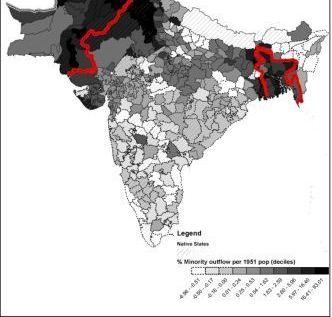 The relationship between combat and subsequent ethnic cleansing

There is a lot of contemporary data from archives and news reports to suggest that districts with larger concentrations of combat veterans were, as our results suggest, heavily involved in campaigns to persuade members of the other communities to leave, in organizing the mass flight of their own community in areas where they were clearly outnumbered (as Sikh veterans did from the Lyallpur district, for instance), and in encouraging co-religionists to move into a district where their dominant position seemed tenuous.

By writing this paper we don’t mean at all to suggest that all veterans will be involved in such violence. But our paper does suggest that whether veterans will act to cleanse rival groups or turn to more peaceful pursuits might depend a lot on context and the threats they face. Where, as in 1947 India, veterans lack protection and their future is highly uncertain, the incentives for organising violence and collective action were a lot different than in societies like post-Vietnam America, where the state was stable and the economy growing. Something for India to think about as it tries to create incentives today for insurgents in the north and north east to lay down their arms.

All figures are from Jha and Wilkinson 2012