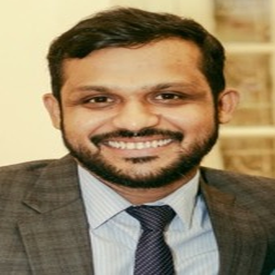 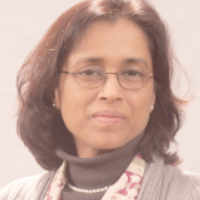 The New Education Policy has proposed that the one million teacher vacancies in public elementary schools be filled imperatively. Using 2019-20 District Information System for Education (u-DISE) data, this article assesses this estimate of teacher shortages across India. Accounting for the prevalence of teacher surpluses and ‘fake’ student enrolment, it finds that there is a net surplus of about 100,000 teachers instead of the much-publicised shortage of a million teachers.

There is a widespread perception in India that an important reason for the poor learning levels in elementary schools is a great paucity of teachers. India’s Ministry of Education estimates that there are over one million teacher vacancies in public elementary schools, which the National Education Policy 2020 (NEP) promises to fill at the earliest. In a recent study (Datta and Kingdon 2021a), we investigate the veracity of this large vacancy estimate, as it is inconsistent with the simple fact that, as per our calculations, the pupil-teacher ratio (PTR) in public schools is 25.1 pupils per teacher, which is significantly lower than the PTR of 30 permitted in the Right to Education (RTE) Act, 2009. On first impression, this suggests a large number of surplus teachers, and calls into question the notion of an acute teacher shortage in the country. We also calculate the fiscal cost of filling one million teacher vacancies.

Using official 2019-20 District Information System for Education (DISE) data, we calculate the teacher vacancies or surpluses in each school by comparing its self-reported pupil enrolment with its current number of teachers. We see whether these fall short of (or exceed) the number of teachers required as per the teacher-allocation norms of the RTE Act, which are related to the number of enrolled students. We tallied these vacancy (or surplus) numbers across all the schools within a state, to arrive at the total number of teacher vacancies or surpluses in the state.

In our study, first, we find that while our calculations broadly confirm a large number of teacher vacancies, they show that applying the same teacher-allocation norms of the RTE Act, many schools have surplus teachers too. Adjusting for the observed large number of surplus teachers gives a net deficit of 246,346 teachers – that is, only about a quarter of the widely publicised one million teacher vacancies. If we remove the outlier state of Bihar – which alone reports a total of 176,201 teacher vacancies – the national net deficit is only 70,145 teachers in the 20 major states1 of India.

A state-wise analysis of this net national deficit shows that only seven states have net teacher vacancies, and that 94% of these are in five states – Bihar, Uttar Pradesh, Jharkhand, Madhya Pradesh, and Karnataka. Fourteen states have net teacher surpluses, where large savings can result from reducing surplus teachers, for example, by stopping fresh recruitment, voluntary retirement schemes, etc. There is much scope for redeployment of teachers within districts, from teacher-surplus to teacher-deficit schools, even in net teacher-deficit states.

We also adjust for exaggerated pupil enrolment numbers, based on estimates of fake enrolment by bodies such as the Mid Day Meal Authority and an audit by the Comptroller and Auditor General (CAG) in 2015 (CAG, 2015). Figure 1 also shows sudden jumps at the enrolment points above which a new teacher or head-teacher is meant to be allocated to a school – that is, just above enrolment of 60 and 100, and at multiples of 30, above 60 pupils. Adjusting for over-reported enrolment greatly reduces the number of required teachers (and therefore teacher vacancies), and raises the count of surplus teachers. According to our calculations, if the government ignores fake enrolment, and fills its claimed one million teacher vacancies, the already modest mean PTR of 25.1 would fall to 19.9, at an additional teacher salary cost of nearly Rs. 636.74 billion (in 2019-20 prices), creating a very large permanent fiscal burden. 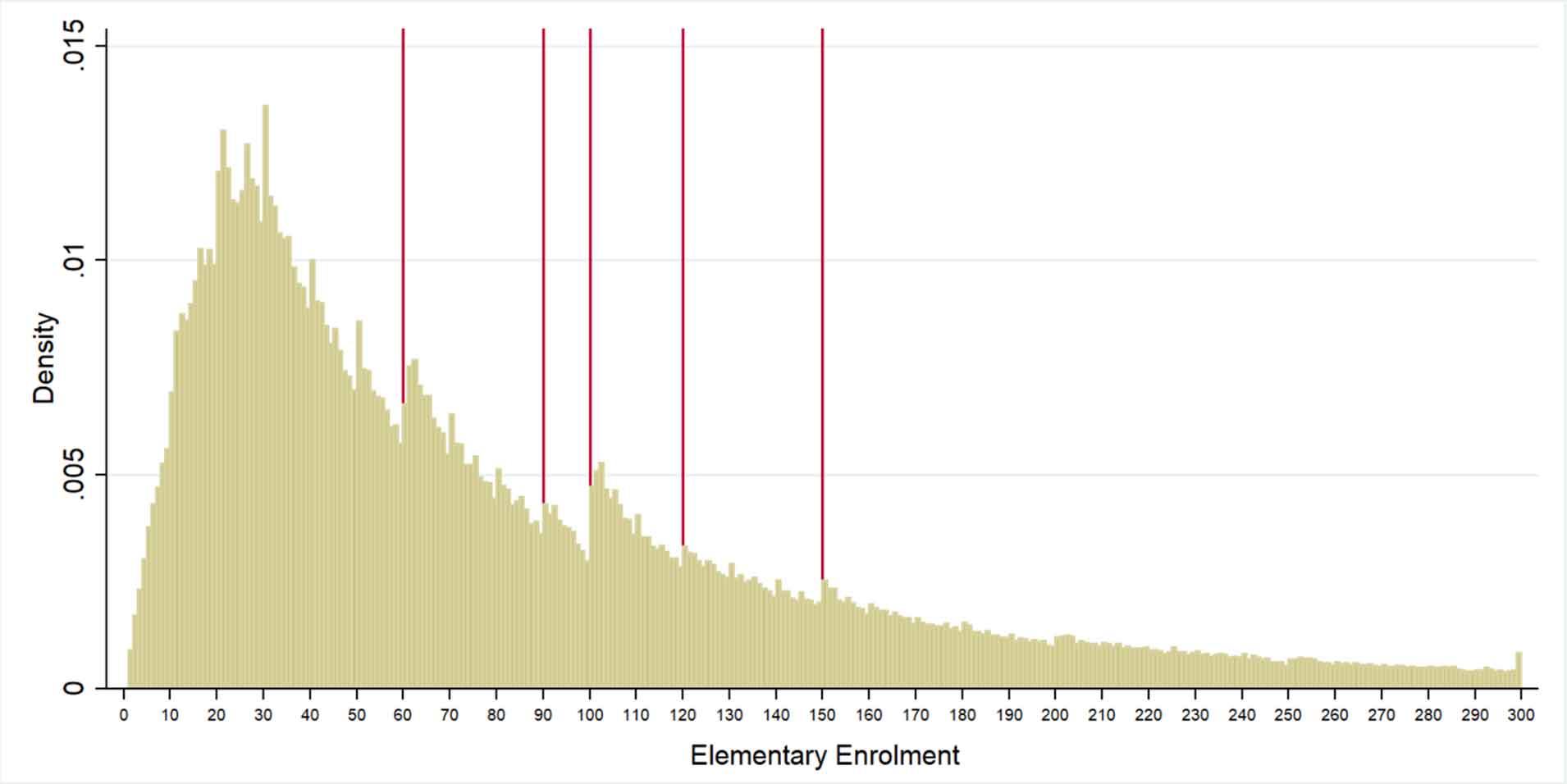 Combining both ideas – first removing fake enrolments and then estimating additional teachers required to fill only net teacher vacancies (the vacancies that remain after redeploying surplus teachers within a state) for each state – would imply a national net surplus of 98,371 teachers.

Additionally, we show how the RTE Act’s rule of providing two teachers to any school with “60 or fewer” students leads to two teachers being allocated even to ‘tiny’ schools, those with “20 or fewer” total students. There were 129,424 such ‘tiny’ public schools in our sample and these had, on average, merely 12.7 pupils per school. Here, the RTE-mandated rule of appointing two teachers led to an average PTR of a mere 6.8 pupils per teacher. We show that if the rule were modified, and only one teacher was allocated to schools with 20 students or less, there would be a national net deficit of only 114,620 teachers, without adjusting for fake enrolment. After removing the estimated fake students, there is a net teacher surplus of 239,800 teachers.

Finally, we quantify wastage of scarce educational resources by examining schools that have a significant teacher surplus. To illustrate this excess: there were 27,619 small schools with a PTR of 6.6 pupils per teacher.2 They employed a total of 171,055 teachers, but if these schools had the mandated two teachers each, they would need only 55,238 teachers.3 These schools had a combined annual teacher salary bill of Rs. 101.73 billion per annum in 2019-20, and a large per-pupil-teacher salary expense of Rs. 89,947 – this is 1.8 times the per capita income of Bihar that year, which is being spent on each child’s education in small public schools across the sample!

From our analysis of u-DISE data from 2010-11 to 2019-20, we found that student enrolment in public elementary schools has fallen greatly and school sizes have become very small due to a long-term trend of dropping out of public schools and migration to private schools. By 2019-20, the median size of a public elementary school was a mere 63 pupils, and 48% of all public schools had a total enrolment of 60 or fewer pupils, and an average of merely 31 pupils per school.

This shrinking of school size raises questions about their pedagogic viability and their scope for offering children adequate socialisation opportunities. This suggests the need for a policy on minimum viable school size. Some states (such as Madhya Pradesh, Uttar Pradesh and Rajasthan) have reduced their number of schools, and thus raised average school size by consolidating nearby schools. To ensure that access is not jeopardised when schools are merged, states could compensate those children who have to travel further by defraying transport costs. Perhaps, by providing parents with a direct benefit (cash) transfer for transport to school.

This also calls for a review of the two-teacher rule in the RTE Act – applicable even for ‘tiny’ schools, whose numbers have rapidly grown in recent years. In light of the available literature on the impact of class size or PTR on pupil learning, and the lack of a known ‘threshold’4 at a PTR of 30, the teacher allocation rules could be made more evidence-based (see Datta and Kingdon 2021b for a more detailed discussion).

Lastly, the governments of the 13 states5 with net teacher surpluses need to consider how much of the problem of teacher shortage in some schools should be solved by hiring, and how much by reallocation of teachers from surplus-teacher schools. In principle, as mentioned above, a number of ways can be used to rationalise surplus teachers. A district-wise analysis within each state would be helpful to see the scope of intra-district or intra-division redeployment of teachers from surplus to deficit schools. The NEP 2020 promises that, in order to encourage redeployment to less desirable locations, “incentives will be provided for teachers to take up teaching jobs in rural areas … a key incentive will be the provision of local housing or increased housing allowances”. This lever could be used to actually implement redeployment.

While transferring teachers may be administratively and politically challenging, state governments need to consider how fair it would be for taxpayers to shoulder the cost of the ‘rent’6 that a large number of individual teachers get from assignments near home that have few students to teach; and whether it is legitimate to incur large fiscal costs not because the state has too few teachers but because it cannot (or is not willing to) reassign teachers from very small or teacher-surplus schools, and hence does not reach the permitted upper limit of class sizes and pupil-teacher ratios.

Thanks for sharing this. What maybe an equally compelling case if the states did this analysis on the urban-rural axis. My hypothesis based on seeing government schools in Mumbai and Bangalore is that the English medium classrooms are flooded and will increase further post pandemic as parents will withdraw students from affordable private schools. In such a case it makes sense for states to construct a policy to move teachers to urban locations where there is a there surplus in rural areas or directly recruit new teachers to urban schools.