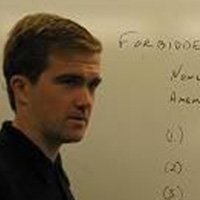 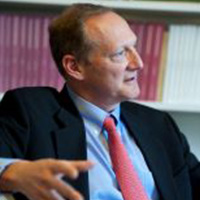 While the detrimental effects of poor sanitation are widely known, there is disagreement about the key barriers to expanding improved sanitation coverage. This column presents results from a field experiment in Bangladesh that designs, implements and tests a range of sanitation marketing strategies. It finds that cost is the primary barrier to adoption, and that investment decisions are interlinked across neighbours.

One billion people, or about 15% of the world’s population, currently practice open defecation (OD), and another 1.5 billion do not have access to a hygienic latrine or toilet (WHO/ UNICEF 2014). In spite of the existence of simple, effective solutions, such as pour-flush latrines, poor sanitation causes an estimated 280,000 deaths per year, and may also contribute to serious long-term health conditions (see, for example, Lin et al. 2013). Given the scope of the problem, governments and major development institutions have devoted substantial resources to improving sanitation in developing countries1. However, significant disagreement remains about the key barriers to increasing improved sanitation coverage. If poverty is the main constraint, price subsidies should increase improved latrine adoption. However, some practitioners express concerns that subsidies may undermine intrinsic motivation by creating dependency. If information and knowledge are the main barriers, than education campaigns could be a sufficient and cost-effective solution. Complicating matters further, the health benefits of improved sanitation depend jointly on households’ sanitation behaviour and that of their neighbours. This means individual households may forego investment in improved sanitation if they do not believe a sufficient share of their neighbours will invest simultaneously. If this mechanism (known as a collective action problem to economists) is relevant in this context, then interventions targeting groups rather than individuals, and education campaigns that promote joint commitments to invest may be important for improving sanitation outcomes.

How can improved sanitation coverage be expanded?

In order to improve our understanding of these potential barriers to adoption, we partnered with Innovations for Poverty Action (IPA), Village Education Resource Center (VERC) and WaterAid Bangladesh to design, implement and test a range of sanitation marketing strategies in the Tanore district in rural Bangladesh (Guiteras, Levinsohn and Mobarak 2014). Tanore is a relatively dense rural area of Bangladesh, and is the poorest region in the country. Although sanitation coverage has increased dramatically in rural Bangladesh in recent decades, progress in Tanore has been slower. Prior to the start of the study, 31% of households reported that they either lacked a latrine or used an unimproved latrine. Only 50% had regular access to an improved sanitation facility, defined as a latrine that separates human excreta from human contact.

We conducted a randomised controlled trial (RCT) with over 18,000 households in approximately 380 communities to test the effectiveness of three distinct marketing strategies to counter financial and information constraints, and collective action problems:

Note: (i) The ‘control’ group of households received no intervention. (ii) For the subsidy intervention, both lottery winners and losers are included here.

We added additional variation into our experiment by varying the proportion of lottery participants drawn as winners at the neighborhood level. We split neighborhoods into three intensity groups: low, medium, and high, corresponding to 25%, 50% and 75% winners. This variation enabled us to investigate the importance of collective action problems and spillovers on latrine adoption and use.

We found that community motivation (LPP Only) or the provision of LSAs alone did not increase latrine access or reduce OD relative to the control group for subsidy-eligible households. This suggests that lack of knowledge about the importance of sanitation or about how to purchase or maintain a latrine are not main factors for limiting demand for latrines in this context. However, at the village level, community motivation in combination with subsidies targeted to the subsidy-eligible population did increase sanitation coverage. Compared to the control group, households in LPP + Subsidy villages were 7.3 percentage points more likely to have access to any latrine and 14.3 percentage points more likely to have access to a hygienic latrine – representing a 9.4% increase in latrine access and 33.7% increase in hygienic latrine access. These subsidies also reduced adult OD by 9 percentage points, representing a 22% reduction relative to the control group. Adding an LSA to the LPP + Subsidy treatments did not increase the effectiveness of the interventions.

Figure 1. Effects of interventions on latrine access and open defecation 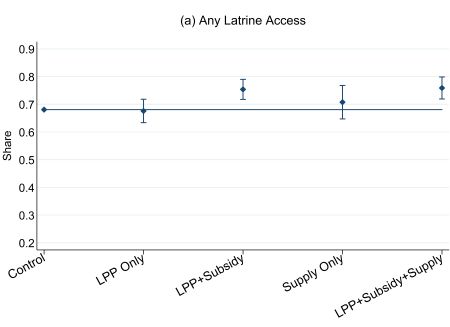 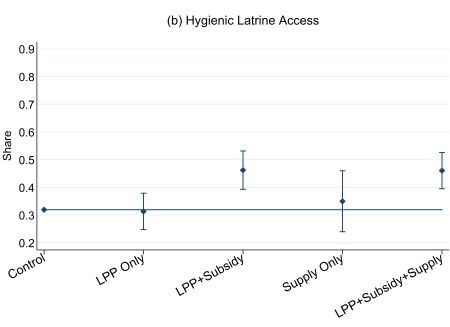 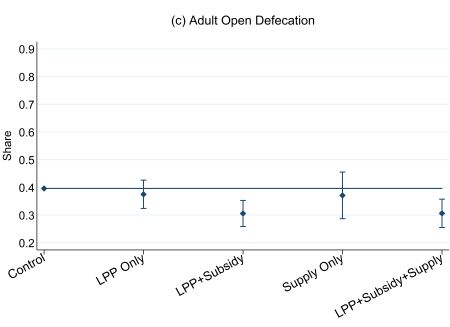 The effects of the subsidy vary for winners and losers across the various neighborhood-level intensities. Voucher winners are more likely to own latrines than lottery losers in Subsidy villages and subsidy-eligible households in LPP Only villages. Compared to those in LPP Only neighborhoods, households in low-, medium- and high-intensity neighborhoods were 13.7, 20.9 and 20.4 percentage points more likely to own a hygienic latrine, respectively. Further, we find that winning households are more likely to turn their subsidy into a hygienic latrine investment if a larger share of their neighbours also receives vouchers, suggesting evidence of a social multiplier among eligible households who won the subsidy lottery.

OD behaviour follows the same pattern as latrine ownership. Eligible households are less likely to practice OD if more of their neighbors receive subsidies. Relative to adults in eligible households in control communities, OD among adults in lottery-winning households in low-, medium- and high-intensity neighborhoods falls by 7.2, 13.8 and 11.6 percentage points, respectively. These changes represent reductions of 18-35% relative to the control group average. Even lottery losers reduced their OD rates relative to the control group in medium- and high-intensity villages (8.8 percentage points and 8.1 percentage points, respectively). Notably, the OD reduction among lottery losers in medium- and high-intensity villages is comparable to the decrease among lottery winners in low-intensity villages.

Figure 2. Effects of subsidies by intensity on latrine ownership and open defecation

2a. Any latrine ownership 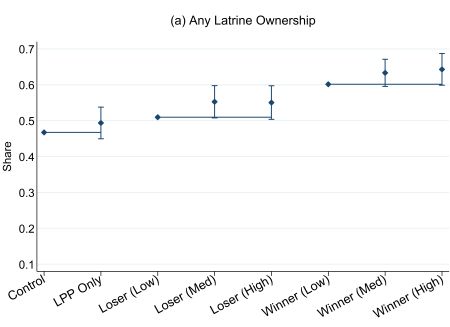 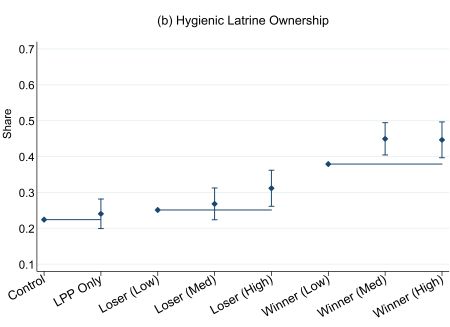 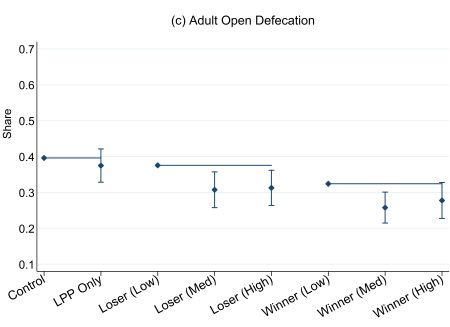 Encourage joint community investment with subsidies for the poorest

Overall, our research is consistent with a growing body of research showing price as the primary barrier to adoption of health-related products and technologies (see, for example, Dupas 2014, Mobarak et al. 2012, Ahuja, Kremer and Zwane 2010). The null effects of the LPP Only and Supply Only interventions on latrine adoption also counter a common belief that community-based motivation is the most effective way to move households away from OD and towards basic latrines.

Perhaps more importantly, we find evidence suggesting interlinked decision-making between households and their neighbours. We can take this as evidence of collective action problems, which, in turn, provides specific implications about the design of effective marketing and latrine-promotion strategies. Sanitation interventions will be more cost-effective if they can identify the relevant network and target that group jointly rather than each household individually. Asking community members to make joint investment commitments is a good idea, but our results suggest that this should be accompanied by subsidies targeted to the poorest members of the community. Future programmes could harness the interplay between subsides and interlinked decision-making by combining financial incentives with a forum for community cooperation to create a virtuous cycle where the adoption of improved latrines spurs further adoption.