Fertility reduction and a gender-balanced population often appear to be conflicting objectives in countries with persistent son preference and easy access to sex-selection technology, as targeting one may worsen the other. This article finds that financial incentive programmes that reward parents that have fewer children and more girls, such as Haryana’s Devi Rupak, may only play a limited role in resolving this conflict.

Low-cost technology for prenatal sex-determination has allowed son-preferring parents to selectively abort girls – thereby increasing the male-female sex ratio at birth in India and in several other countries.1 For every female birth, 1.11 boys were born in India during 2013-2015. Relative to the ‘natural’ sex ratio at birth – approximately 1.05 boys per girl – these numbers reflect a substantial demographic imbalance.

Bans on sex selection are difficult to implement since abortion and ultrasound are not illegal in general. As a result, existing regulations have been largely unsuccessful and policymakers have turned to financial incentives instead. However, programmes that seek to decrease the sex ratio by incentivising parents to have more girls or, more generally, by improving the relative value of girls, may lead to higher fertility if parents respond by increasing the number of daughters without decreasing the number of sons equally. This may happen if sons and daughters are imperfect substitutes or if parents desire a minimum number of sons. Thus, fertility reduction and a gender-balanced population often appear to be conflicting objectives as targeting one may worsen the other. In fact, fertility decline has been shown to be a cause of the rising sex ratios at birth, with technology playing a facilitating role (Park and Cho 1995, Das Gupta and Bhat 1997, Bhat and Zavier 2003, Ebenstein 2010, Kashyap and Villavicencio 2015, Jayachandran 2016). Figure 1 displays the inverse trends in fertility and the child sex ratio in India. 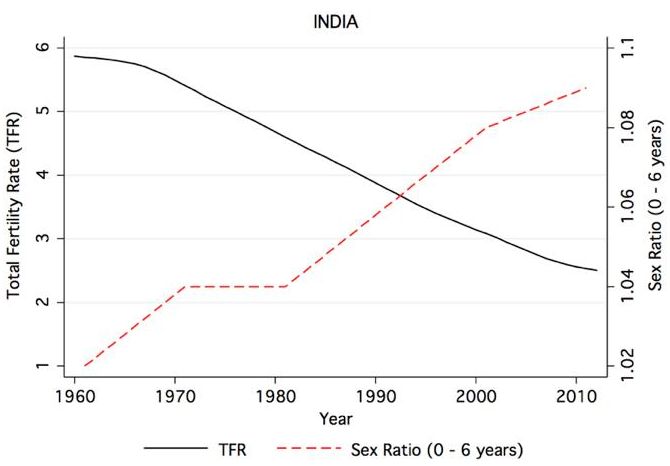 State governments in India have introduced several programmes that seek to resolve this fertility-sex ratio trade-off by rewarding parents that have fewer children and more girls; for example, Devi Rupak in Haryana, Balri Rakshak Yojna in Punjab, and Ladli Laxmi in Madhya Pradesh. The eligibility criteria of these programmes vary along three key dimensions: (i) the maximum number of children (one to three), (ii) their gender mix, and (iii) the minimum number of girls. Some programmes allow parents to have children of both sexes while others do not. In some cases, parents that have only sons and no daughters also receive benefits – as long as they satisfy the fertility limit. The benefits are provided either as direct cash transfers (periodically or in a lump-sum manner) or through subsidies for school fees or marriage-related expenses, for example. Typically, couples are required to adopt a permanent method of family planning to prevent future childbearing.

Despite the proliferation of such dual-target policies in recent years, there is no evidence on their effectiveness. In general, little is known about factors that can decrease the sex ratio at birth, either on its own or jointly with fertility. The literature on the causal effect of financial incentives on fertility has been limited to pro-natal policies in developed countries and the one child policy in the context of developing countries (Milligan 2005, Cohen, Dehejia and Romanov 2013, Laroque and Salanié 2014).

In Anukriti (2018), I evaluate Devi Rupak, a conditional cash transfer programme announced in 2002 by the state of Haryana. Devi Rupak seeks to decrease both fertility and the sex ratio at birth by rewarding couples that have either one child, or two daughters and no sons. Eligible couples that adopt a terminal method of family planning (male or female sterilisation) receive monthly payments for a period of 20 years. The incentive amount varies with the number and the gender composition of their children at the time of sterilisation. Couples that choose sterilisation after their first child receive a monthly benefit of Rs. 500 if they have a daughter and Rs. 200 if they have a son. Devi Rupak also provides Rs. 200 per month to parents of two children, but only if both are daughters. Couples with any other composition of children (including no children) are not eligible to receive any benefits. These payments are disbursed on a monthly basis by the local civil surgeon’s office for a period of 20 years and their magnitude is substantial – the monthly benefit for couples whose only child is a girl is approximately half of Haryana's per capita monthly consumption expenditure (India Human Development Survey, 2005).

I use data from the 1998–1999 and 2005–2006 rounds of the National Family Health Survey (NFHS) of India, and the 2002–2004 round of the District-Level Household Survey (DLHS) of India. To estimate the causal effect of Devi Rupak, I compare women in Haryana to their counterparts in similar neighbouring states where such a programme was not implemented and use the variation in incentives by the year of programme implementation and the composition of older children, to estimate the causal effect of Devi Rupak in a differences-in-differences (DD) framework.2 I find that Devi Rupak increases the probability that a couple has only one child by 0.6 to 1 percentage points (p.p.). However, this fertility response is primarily driven by a 0.4 to 1 p.p. or a 5 to 11% increase in the probability that a couple has only one boy – from a baseline probability of 8.7%. Despite one girl being the most remunerative child composition, there is no increase in the share of couples with one daughter and no sons in the overall sample. There is a small increase in the likelihood that a couple has only two girls, but it is not consistently significant.

I also examine the impact of Devi Rupak on ‘transitional’ couples, that is, couples that had at least one child when the programme was announced. Couples that already had a boy (and no girls) are less likely to have a second birth whereas the probability of second birth increases for one-girl couples that had no sons. Second births to these transitional couples that already had one child are more likely to be a boy. The probability of a male second birth increases by 6 p.p. and 2 p.p., respectively, for couples with a first boy and a first girl. This is likely because couples that choose to forgo the one-child incentives and select into a second pregnancy have a stronger son preference and hence, are more likely to sex-select.

Most strikingly, Devi Rupak also increases the sex ratio at first birth by 1 to 2.3%. While previous literature has found no evidence of sex selection for first births in India (Bhalotra and Cochrane 2010), Devi Rupak induces couples who want at least one son to sex-select at first birth as it only offers benefits for either one child or two girls. My results on birth spacing reinforce that Devi Rupak increases sex selection for the first birth. The differential stopping behaviour of transitional couples by the gender of their first child and greater sex selection at first parity by new parents both contribute to the increase in the proportion of one-boy couples.

Thus, despite substantial financial incentives, Devi Rupak is unable to resolve the fertility-sex ratio trade-off in Haryana. It lowers fertility, but worsens the sex ratio at birth. Back-of-the-envelope calculations suggest that a subsidy worth ten months of average household consumption expenditure is insufficient in inducing parents in Haryana to have only one daughter and no sons. Unless even larger benefits are offered, it appears that financial incentives are unlikely to resolve the fertility-sex ratio trade-off, if parents are expected to choose either sons or daughters.

My results suggest that removing the one-boy option from Devi Rupak will avoid the unintended increase in the sex ratio at first birth, but may also adversely affect the fertility decline. In general, the structure of programmes like Devi Rupak must be carefully designed to avoid unintended consequences since key parameters such as the degree of son preference and the cost of children are largely unobservable.

Although Devi Rupak was implemented in only one Indian state, it is representative of the more recent programmes along several dimensions. Moreover, its strengths and weaknesses, as highlighted by my results, can improve the design of programmes with similar competing demographic priorities.

Ultimately, the fertility-sex ratio trade-off will persist unless son preference weakens. The underlying reasons behind son preference could be many. If discrimination against girls is primarily cost-based, financial incentives can potentially be more effective than the results of this research suggest, and the design of an optimal programme is worth exploring. On the other hand, if son preference is mainly taste-based, public policy interventions might need to focus on changing social norms.