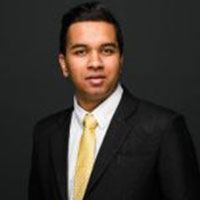 Indian cities are fund-starved and unprepared to handle the stresses of rapid urbanisation in the country. Urban local bodies and municipal corporations, particularly in tier-2 and tier-3 cities, do not have the necessary autonomy or capacity to raise revenue. In this article, Nandan Sharalaya discusses options available to the government for financing cities, above and beyond the traditional model of public-private partnerships. About 814 million people are expected to live in Indian cities by 2050. Just in terms of scale, the task of effectively managing cities in India will potentially be touted as the world’s greatest managerial challenge. And while China might have an almost equal number living in its cities, it is enviably better poised to handle its urban explosion than India.

The numbers paint a disappointing picture. A 2010 McKinsey report estimates that India would need US$ 1.2 trillion by 2030, a far cry from current spending estimates. India’s annual per capita spending on cities stands at a measly US$50. The corresponding figures for China and UK are about US $362 and US$1,772, respectively.

The financial health of Indian cities is in such a pathetic state that several urban local governments have to rely on state governments to fund even basic operational expenses like employee salaries. Revenue generated by urban local bodies accounts for less than 0.9% of the total GDP (gross domestic product), despite cities contributing almost 60% towards GDP. In comparison, revenue generated as a percentage of GDP in developing countries with similar growth trajectories like Brazil (7.4%) and South Africa (6%) is much higher. For Indian cities to be competitive there is an immediate need to invest in them.

At present, the government’s flagship urban development schemes including the Smart Cities Mission, AMRUT (Atal Mission for Rejuvenation and Urban Transformation)1, HRIDAY (Heritage City Development and Augmentation Yojana)2 , etc. funds only a fraction of the required investment and cities are tasked with finding other ways to bridge the funding gap. For example, under the Smart Cities Mission, the government has allocated US$15 billion for a 100 cities to be disbursed over four years, with equal contributions from the central and state governments. This amount is by no means sufficient. Thus, the grant is to be used as a starting point to attract funding from external sources.

PPP model is no panacea

Over the last decade, public-private partnerships (PPPs) have often been perceived as potential silver bullets in infrastructure creation. Even the Smart Cities Mission relies heavily on the participation of the private sector. But PPPs have not worked as well as they were expected to owing to poor rate of return for the private sector and other inefficiencies. Many experts now argue that the famed PPP model is broken and unless the government finds a way to minimise financial risk and disputes, the situation will only worsen. The World Economic Forum in its report titled ‘Reforms to Accelerate the Development of India’s Smart Cities’ argues that one of the other main reasons for limited success of the PPP model is insufficient project preparation, which results in the development of projects that are not bankable in terms of commercial and technical feasibility, risk allocation, and governmental commitment towards the regulatory framework. Cities participating in the Smart Cities Mission have sought advice from external experts to assist with an extensive planning process that has been largely methodological. Hence, these cities might overcome the challenges associated with insufficient planning, but the same cannot be said for other cities.

The underlying lesson is that the government cannot afford to wholly rely on the private sector and will have to boost public spending as well as generate revenue on its own. With the banking system heavily stressed with bad debts, urban rejuvenation might not receive the right kind of impetus from the private sector. The PPP model needs a radical redesign to be able to account for regulatory uncertainty and financial risk, a fact acknowledged by even the Kelkar committee appointed to study how the PPP model can be revived.

The case for a robust municipal bond market

In the meanwhile, the government must commit to developing a city’s creditworthiness. Credit rating of cities and towns is the first step towards raising money through the bond market, subnational governments, and international lenders. More recently, the government announced that 94 of the 500 cities included in Smart Cities Mission and AMRUT have obtained such ratings necessary for issuing municipal bonds3. However only 59% of cities assessed were found to be worthy of investment. This percentage is expected to fall once the remaining 406 cities have been rated. 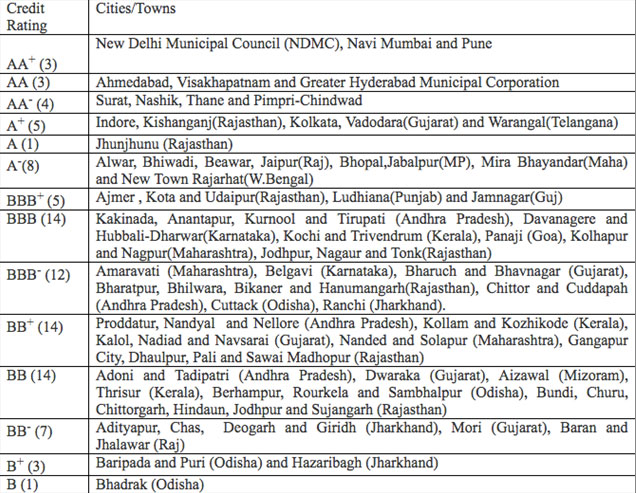 Credit ratings are assigned based on assets and liabilities of urban local bodies, revenue streams, resources available for capital investments, implementation of credible double-entry accounting mechanisms, and other governance practices. Hence, for cities that fall below the investment grade, structuring sound financial management systems, periodic review of performance evaluations, and audit of municipal finances are key reform measures that will need to be implemented at the earliest.

The rating mechanism is fairly straightforward. Cities rated (AA) are considered safe investments and may access the market directly without any intervention. Most of the metropolitan cities fall under this category. Cities rated (A) and (BBB) are less desirable in comparison but are still considered worthy of investment. However, these cities may need some sort of financial cushioning from the state and central government. In the scenario that the investments hit rough waters, investors need to remain reassured that their investments are still protected and that cities aren’t defaulting on interest payments. This could take the form of a separate contingency fund, funds parked in an escrow account, etc.

Cities rated (BB) and below will find it difficult to raise funds. However, even if they do manage to elicit investments, these are bound to come at much higher rates of interest, which might be economically infeasible. The government is considering setting up an interest subsidy fund of Rs. 4 billion which might be particularly useful for these cities, but the exact details of this move are not yet clear.

Setting the house in order

Despite the optimism and investor appetite, municipal bonds may prove to be successful only in fast-growing metropolitan cities in the near future. Pune is on the verge of raising Rs. 23 billion, an amount well over what has been collected so far cumulatively by all cities till date. Ahmedabad, New Delhi, Bangalore, Hyderabad, and Chennai might follow soon. However, as is apparent, this mechanism does not solve the problem of financing of small- and medium-sized Indian cities and towns. No scheme can ever serve as a substitute to getting the basics right. Urban local bodies will have to find ways to expand their revenue streams.

Property taxes and user charges form the major chunk of revenue for most municipal governments. Compliance remains woefully poor, which has direct unfavourable consequences on infrastructure maintenance and cost recovery. Developing countries with an obligation to cater to the bottom of the pyramid are also forced to under-price the delivery of utility services, which often thwarts any rational attempt to set up an independent price determination mechanism linked to the market. In a democratic framework, the nature of reforms is such that some can be instituted easily with the right political will and leadership, while others take longer owing to multiple stakeholders with varied interests.

Going forward, states must initiate property tax reform which has been long overdue. Another reform worth pursuing is the deployment of land value capture instruments. When a government invests in developing a particular area - for example, building a new airport outside a city - land prices around the area rises. A portion of this benefit could accrue to the government either through betterment charges, tax increment financing, developer extractions, or impact fees. Several states like Tamil Nadu. Karnataka, Andhra Pradesh, Maharashtra, Gujarat, and West Bengal are slowly beginning to explore this instrument as a method to generate revenues.

P.K. Mohanty in his book ‘Financing Cities in India’ also argues that for cities to be able to exploit agglomeration externalities, they should be able to access a broad portfolio of taxes such as motor vehicle tax, professional tax, fuel tax, excise, business and financial taxes, entertainment tax etc., all of which are currently appropriated by the state governments. This would involve amending the Constitution to have these taxes included in the municipal finance list. He also advocates for the inclusion of a city GST (goods and services tax) rate within the state GST rate, a formula-based mechanism to ensure municipalities get their share.

Some of these reforms require immense political will and a real understanding of the problem cities face. Unfortunately, despite being the breadwinners of the economy, Indian cities have seldom been able to assert themselves strongly enough.