How much does India spend on elementary education? 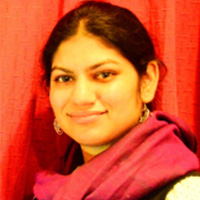 The landscape of elementary education (EE) in India has changed dramatically in the last few years. On the one hand, it has been characterised by a concerted push to build physical infrastructure and human resources for public provision of education, and launch of a variety of schemes to reduce the number of out-of-school children. On the other hand, there is an increasing preference of parents to send their children to private schools. Despite these structural changes, estimates on public and private expenditure on elementary education are not available. We attempt to fill this gap by estimating annual public expenditure per student for those enrolled in government schools, and annual private expenditure per student for those enrolled in private schools, for 16 major states in India for 2011-121 (Dongre, Kapur and Tewary 2014).

In the context of public expenditure on EE, the state governments are the primary spenders. This mainly includes teacher salaries, creation and maintenance of infrastructure, textbooks, uniforms and scholarships, new programmes for improving quality of teaching, curriculum design, academic support to schools, administration and regulation etc. The details of this spending are in individual state budget documents. However, collating information from budget documents is difficult as many of them are not available online, budget heads are not standardised, and expenditure is spread across many departments (such as social justice, culture, tribal development etc.).Further, in recent years, the central government has increased its spending on EE through Centrally-Sponsored Schemes such as Sarva Shiksha Abhiyan (SSA) and Mid-Day Meals (MDM). These schemes are funded by both central and the state governments, with the major share contributed by the central government. The mechanism of fund flow is scheme-specific - SSA is routed through an autonomous implementation body, while MDM flows into the state treasury.

Given these complexities, we derive total public expenditure on EE by manually collating expenditures on EE from all state budgets across departments (excluding the state share for SSA as that does not come to the state treasury). We then separately add expenditures under SSA, which were obtained from the planning and budgeting documents on the SSA portal. Total expenditure is divided by total enrolment in elementary grades (grades 1 to 8) for government schools, obtained from the District Information System for Education (DISE), to estimate public expenditure per student on those who are enrolled in government schools.

Private expenditure on EE comprises expenditure incurred by households on school fees, exam fees, private tutoring, books and stationary, conveyance etc. We use the latest available data on private expenditure on education - 64th round (2007-08) of the National Sample Survey (NSS) - to calculate private expenditure per student for those who attend private schools (aided and unaided). We adjust these numbers for inflation between 2007-08 and 2011-12 (given that the public expenditure data is from this year).

Median private expenditure per student among the 16 states in our analysis is Rs. 5,959. Chhattisgarh is just below the median while Maharashtra is just above the median. Expenditure per student is highest in Himachal Pradesh, followed by Punjab, Haryana and Tamil Nadu. On the other hand, Uttar Pradesh, Madhya Pradesh, Bihar and Jharkhand are the lowest spenders.

Figure 1. Annual public and private expenditures per student on EE, for 16 major states (2011-12)

Figure 2. Per capita income and public expenditure on EE per student in government schools, for 16 major states (2011-12) 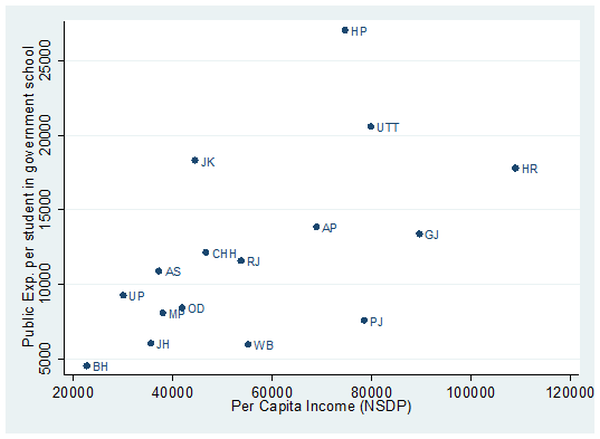 Figure 3. Per capita income and % of SGDP spent on EE, for 16 major states 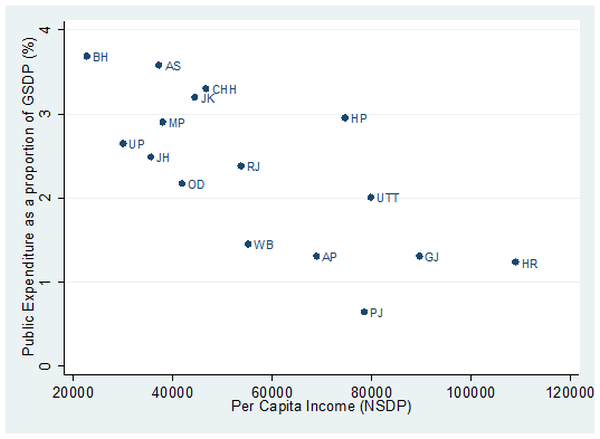 Figure 4a. Public expenditure per student enrolled in government schools (2011-12) and learning outcomes in Reading (2011), for 16 major states 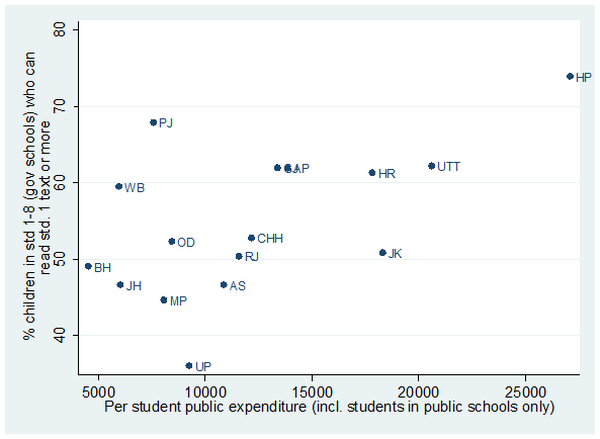 Figure 4b. Public expenditure per student enrolled in government schools (2011-12) and learning outcomes in Mathematics (2011), for 16 major states 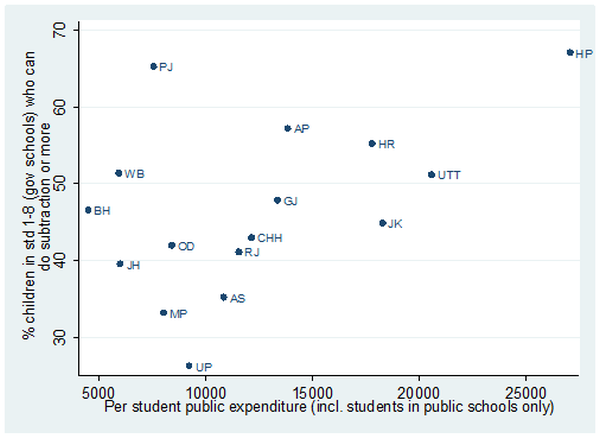 Does this imply that more should be spent per student in government schools if we want to improve learning outcomes? Not really, because in every state, learning outcomes in private schools are better than the government schools, while spending per student is much lower as compared to government schools4. This ‘double’ inefficiency ends up imposing a huge burden on the country, amounting to 2.78% of GDP (Pritchett and Aiyar 2014). This reveals that there is a dire need to ask hard questions, and take tough decisions to make the spending more efficient, and to get more bang for the buck, so to speak.

Since 2012, there have been some important policy shifts. The 12th Five Year Plan explicitly articulates learning improvement as a key policy goal. This was followed by the Ministry of Human Resource Development’s renewed emphasis on the importance of addressing the learning challenge through the launch of the ‘Padhe Bharat, Badhe Bharat’ scheme, which focuses on assessment of student learning and early reading and mathematics skills (for standard 1 and 2 students). While the scheme is a good starting point, it is unlikely to change the bureaucracy’s fixation with inputs in the schooling process such as infrastructure. The need of the hour is to rework the entire education machinery from one that incentivises input delivery to one that explicitly prioritises learning. Redesigning the financial architecture of EE such that annual work plans formulated by the states clearly articulate learning goals, the states have flexibility in choice and implementation of strategies to achieve these goals, and budgets (particularly for Centrally-Sponsored Schemes such as SSA) are tied to performance on these goals, should be the way forward.