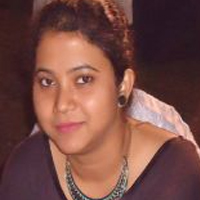 Social Health Insurance seeks to protect the poor from high health spending, and encourage healthcare utilisation. Analysing 2004-05 and 2011-12 Indian Human Development Survey data, this article finds that Rashtriya Swasthya Bima Yojana increased the likelihood of hospitalisation for long-term illness, and of doctor visits for short-term illness. While out-of-pocket health expenditure rose, there was a decline in the number of days lost due to illness.

A large section of the population in developing countries are not covered by health insurance (Banerjee et al. 2004), which has led them to incur huge out-of-pocket (OOP) health expenditures. Given this backdrop, Social Health Insurances (SHIs), which are particularly targetted towards the lower income strata of the society, have recently received a lot of attention in low- and middle-income countries.

While most studies have found a significant positive impact of SHI schemes on the utilisation of health services, the impact on healthcare spending is mixed. Examining an SHI scheme in Peru, Neelsen and O’Donnell (2017) show that it improved ambulatory care and medication but has no effect on in-patient care and OOP health spending. However, in case of Thailand, Gruber et al. (2014) and Limwattananon et al. (2015) find that a health insurance programme for the poor led to a reduction in OOP health spending along with a positive impact on healthcare utilisation. Wagstaff et al. (2009) find that after a highly subsidised health insurance scheme was implemented in China, there was an increase in both in-patient and out-patient utilisation of services, with no change in OOP spending. In Colombia, Miller et al. (2013) find a lower distribution for in-patient expenditure related to preventive care with no impact on the distribution of out-patient spending. There are other studies conducted in China (Wagstaff and Lindelow 2008) and Peru (Bernal et al. 2017) that analyse how health insurance coverage increases the chances of incurring health expenditures by individuals.

Introduced in 2008, Rashtriya Swasthya Bima Yojana (RSBY) was Government of India’s first health insurance scheme that was implemented at the national level1. RSBY aimed to protect poor households from financial distress due to health shocks that required hospitalisation. The enrolment was at the household level, and it provided annual coverage of Rs. 30,000 per household. This covered most of the diseases that required hospitalisation. Beneficiaries could avail healthcare at empanelled private and public hospitals. The scheme was also innovative as it provided cashless facility by issuing smart cards to households.

Only a few studies have focussed on understanding the impact of this large-scale intervention. Using two rounds (61st and 66th) of National Sample Survey (NSS) data (2004-2005 and 2009-2010), Johnson and Krishnaswamy (2012) find an increase in the number of households with a case of hospitalisation, and a small decrease in household out-patient expenditure. On the other hand, Karan et al. (2017) find no significant impact on OOP expenditure using three waves (1999-2000, 2004-2005, and 2011-2012) of the household-level Consumer Expenditure Surveys (CES) conducted by the NSSO (National Sample Survey Organisation). Using the India Human Development Survey (IHDS) dataset, Azam (2018) studies the impact of RSBY on rural and urban households separately and shows a positive and significant impact on utilisation of healthcare services, with no impact on OOP health spending.

In a recent study (Dutta and Sarkar 2021), we evaluate the impact of RSBY on the utilisation of health services and household per-capita OOP health spending, using data from the IHDS2 (2004-05 and 2011-12). We contribute to the literature by examining the causal impacts of RSBY on healthcare utilisation and health expenditure by including different fixed effects3 and showing that the results are similar. Further, we look at the distributional impact of RSBY by implementing the quantile difference-in difference4 approach. We also provide a conceptual framework to form our hypothesis which we test empirically5.

Our results show that RSBY beneficiary households were 1.3 percentage points (16%) more likely to report hospitalisation for a long-term illness (LTI)6. We also find that RSBY encouraged a greater proportion of members within a household to be hospitalised for LTI.

The rise in OOP expenditure on healthcare, as a result of the implementation of RSBY, can be viewed critically especially when the primary objective of the programme was to reduce the financial burden arising out of health shocks. On the one hand, this increase in expenditure can be seen as a burden on the poor households in rural India. On the other hand, households in rural areas do not receive proper treatment especially for STIs because of financial constraints, low awareness of their healthcare needs, and limited availability of facilities. Instead, poor households in rural India often go to a nearby pharmacy to obtain over-the-counter medication, or consult traditional healers because they are generally cheap and easily accessible. The increase in the likelihood of hospitalisation and greater proportion of members in the household getting hospitalised because of RSBY, indicates an increase in their awareness about formal healthcare facilities through more patient-doctor contact. This encourages households to get themselves treated from a doctor for STIs despite of knowing that it would not be covered under RSBY.

Moreover, a positive impact of increased hospitalisation and receiving treatment from doctor is reflected through the fact that the number of days lost8 due to illness decreased. Lost days decreased by 4.36 (20.8%) on account of RSBY and this was primarily driven by a decrease in lost days of 4.96 (27.5%) due to LTI.

Thus, access to RSBY improved utilisation of health services, including an increased likelihood of seeking a doctor’s advice for STIs. While this comes with an increased spending on health, the fall in lost days due to illness suggests that our findings could be less worrying than they may first seem.

Figure 1. Monthly OOP expenditure for households with and without RSBY 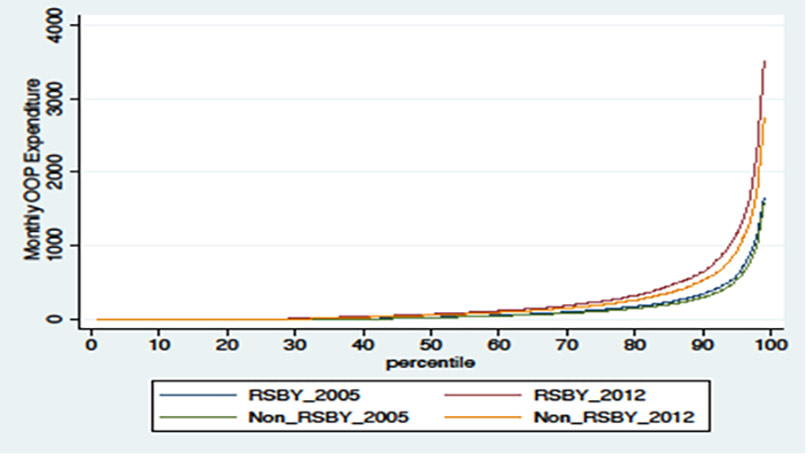 As India and other countries push for universal health coverage, increasing the effectiveness of SHIs is important for providing eligible households with quality healthcare without increasing their OOP health spending. Certain steps could be taken in this regard. First, the coverage limits of such schemes could be extended10, and more services included in their ambit. Second, households or individuals eligible for such schemes could be automatically enrolled so that enrolment rates improve. Third, investments by the government to strengthen public healthcare facilities and their coverage in rural areas, improving the infrastructure and expanding the network of empanelled hospitals, may also help the beneficiary households in reducing their OOP health spending. Finally, random audits by the government or appointed third parties could help ensure that empanelled hospitals provide the covered services free-of-charge to the eligible households seeking care. These steps could further provide households with improved access to affordable healthcare and protect them against high health spending.