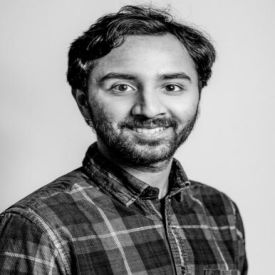 Amidst worries about learning loss caused by school closures during the Covid-19 pandemic, Tamil Nadu's Illam Thedi Kalvi (ITK) – a volunteer-based education programme – has played a vital role in bridging the learning gap. In this note, Sarthak Agrawal recounts his visit to a rural ITK classroom, outlines the factors which have contributed to the success of the programme, and the lessons that other states can learn from this model.

Illam Thedi Kalvi ('Education at doorsteps' in English), the Government of Tamil Nadu’s ambitious endeavour, is robustly addressing the post-Covid learning gap among primary and middle school students. Despite running continuously since December 2021, it still hasn’t attracted widespread national attention. This is a pity, because ongoing research has found that 67% of the initial learning gap in rural Tamil Nadu disappeared in less than four months after ITK’s launch. Amidst a deluge of pessimistic findings on the pandemic’s impact on education, this comes as a booster shot.

How does ITK work?

The ITK calls itself “India’s largest volunteer-based education program”. Over 3.3 million students across 92,000 habitations are being taught by 200,000 women volunteers for 90 minutes everyday. These are staggering numbers. 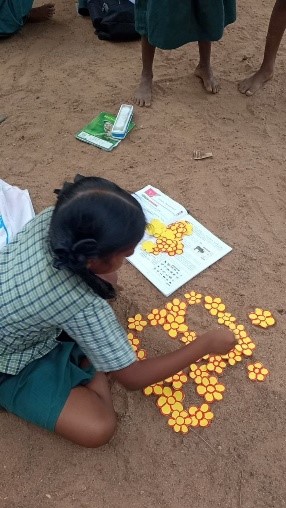 Notwithstanding its success, ITK runs on a simple model. Students are grouped into two cohorts – primary, for classes 1-5, and upper primary for classes 6-8 – and taught a purpose-built curriculum of basic skills in their habitation itself. Since the programme is volunteer driven, one might wonder whether the government faced challenges in finding good teachers. It did, but in shortlisting eligible ones: as per government data, four candidates applied for every position available.

What makes the ITK model so successful? Tamil Nadu’s high gross enrolment ratio of 51% – twice the national average – is probably a key reason. But another factor is that it has successfully leveraged the power of the community. As Prime Minister Modi told Indian Police Service (IPS) probationers last year, “India’s samaj is often more powerful than its sarkar”. The ITK initiative is driven by volunteers who live in the same area in which they are teaching, which enables the establishment of a local connection on both sides. They are shortlisted from a rigorous selection process that includes a psychometric test, and only paid Rs. 1,000 per month to cover their expenses on creating teaching/learning materials (TLMs). Even though this amount is often not delivered on time, they hang on. 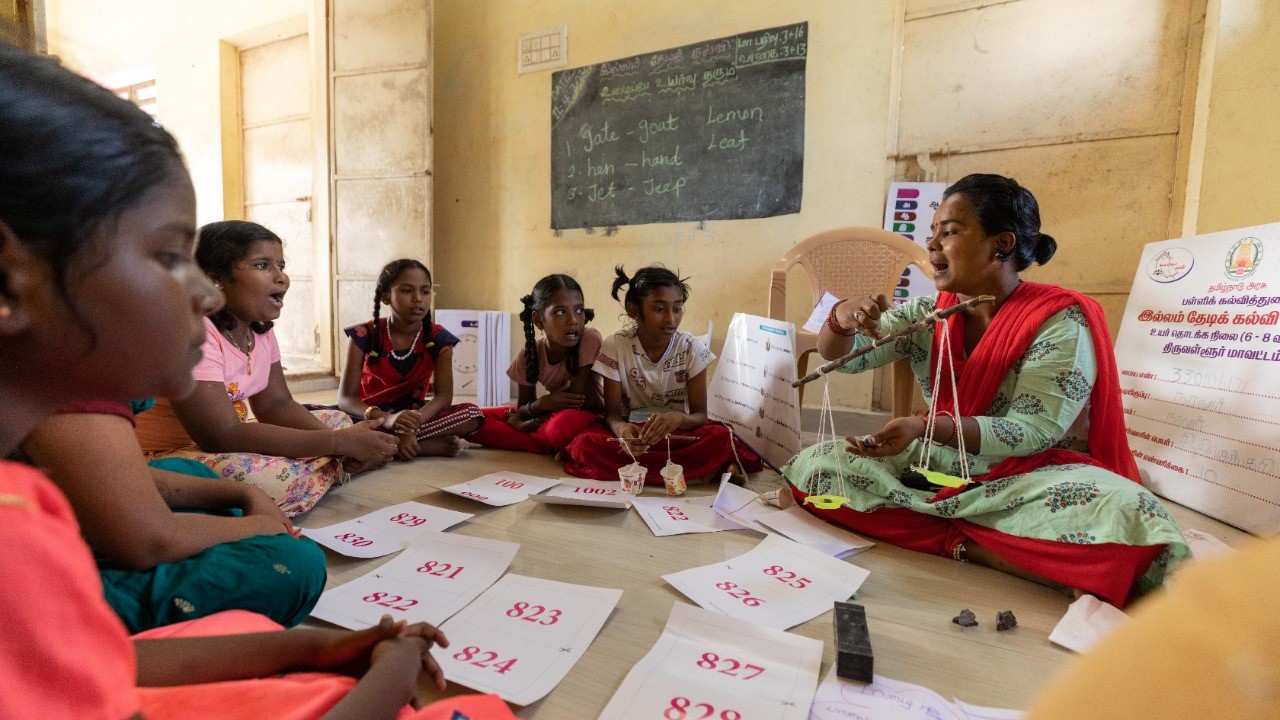 Volunteers create their own teaching and learning materials and are compensated to meet those expenses
Picture credit: Author’s own

Some women are contractual government schoolteachers (paid around Rs. 6,500 a month) who want to use their knowledge to improve learning in their own communities. They may also be looking for a foot in the door to get a permanent job, and though they are unlikely to be successful, compliance levels and motivation still remain high. The state government also does its bit in inspiring these young volunteers; they generously dole out appreciation certificates to well-performing teachers and felicitate the best of them in public programmes.

School management committees (SMC) also deserve credit for the ITK. Defunct in most states, Tamil Nadu’s committees were re-energised just before ITK’s rollout through mass restructuring meetings coordinated by the state’s education department. SMCs verified their volunteers’ backgrounds and domiciles. Committee members also arranged spaces for delivering the evening lessons, which are mostly held in village community halls. These makeshift schools may not have the best infrastructure, but that matters less than we might think – education economists routinely find that increasing school inputs only has a small effect on learning outcomes (Das et al. 2011). What does matter is keeping teachers focussed on their primary job, which ITK tries to do by delegating administrative tasks to SMCs. But it's not just administration – members also pitch in with a stern word to parents if some children are absent regularly. As they are respected members of the community, their remarks carry weight.

Overall awareness of the scheme is high. As per unpublished research by Abhijeet Singh1, 91% of the households report having heard about the ITK, and 57% said that their children attend the programme. Attendance rates are higher among poorer households. Initially the government recruited 5,000 folk artists to spread awareness about ITK across 92,000 hamlets of the state. The Chief Minister also extended his personal buy-in and helped popularise the initiative by inviting volunteers to come forward and contribute.

Master trainers in districts then trained block-level officials, who passed on their learning to volunteers at the last mile. Two government schoolteachers and a few civil society organisation members in every block visited ITK classrooms and supervised classroom activities. Moreover, there are Facebook and Telegram groups where 85,000 and 75,000 volunteers, respectively, communicate with the programme director directly. Teachers are encouraged to share best practices with the rest of the members through the same platform.

No education project these days is complete without a role for technology. ITK has a purpose-built monitoring app that is simple but can be used for multiple tasks. It allows the government to send TLMs to volunteers, and collect data on attendance and learning levels of students.2  Volunteers can also check the status of their stipend payments on this app.

But it is not just the app that makes ITK a 21st-century initiative. During a recent reading marathon, students in the programme read 2.63 billion words in 12 days with the help of Google’s ‘Read Along’ application and their in-class volunteers. This was an excellent use of technology that supplements, but doesn't substitute, for the regular teaching process – in line with what experts advise.

My experience with ITK

I spent an afternoon observing a rural ITK classroom just outside Chennai. Notwithstanding the antics that children were asked to perform in front of us – time that could have been better spent on learning – I was impressed by the dedication of the volunteers and the interest of block officials. They were well aware of the programme’s specifics and seemed personally invested in its success. One volunteer proudly flaunted the TLMs she had developed for her students, among them a frugal but effective battery-run fan. The jury is still out, but I won't be surprised if an impact evaluation finds highly positive results. 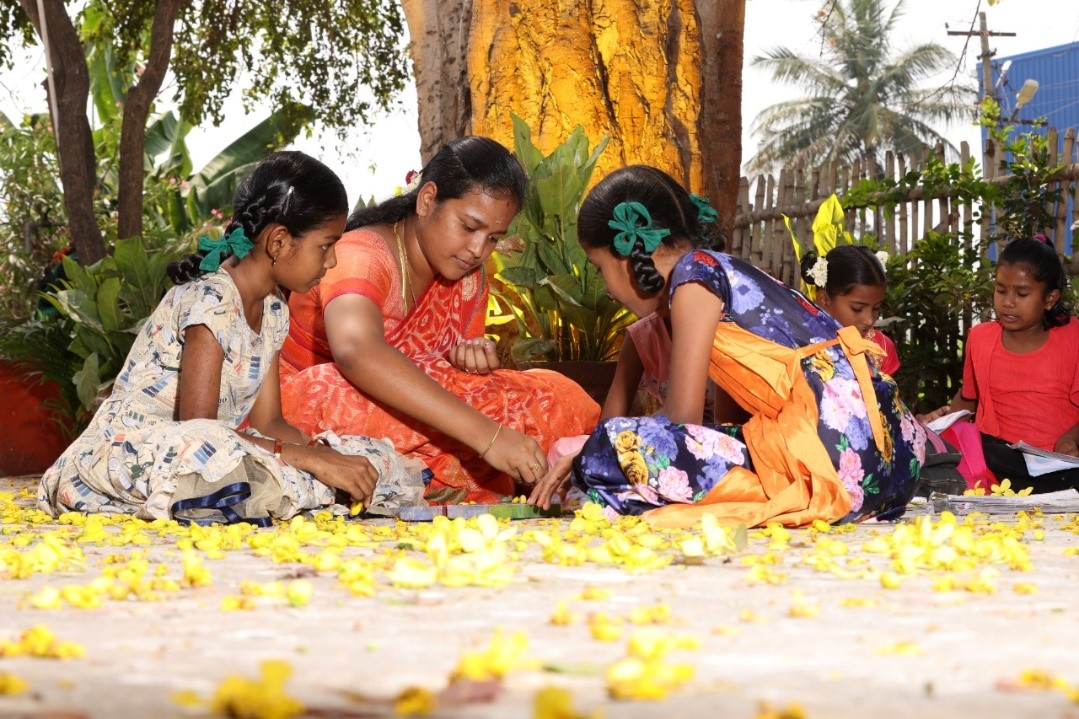 Lessons for other states

After a six-month extension, the programme might run till March 2023. Does it have any lessons for other education departments? Yes, I would argue, many.

First, the damage inflicted by 20-month long school closures cannot be remedied in a few weeks. Initiatives should run for at least a year, if not longer. Second, small pilot projects won’t bridge this huge gap. Public sector leaders should be ambitious and build for scale, just like the ITK does.3 Third, roping in local volunteers and re-energising defunct SMCs can create effective institutions for learning and its monitoring. Fourth, don’t get caught up in building high-tech, fancy monitoring tools. Technology could allow teachers to handhold students; but just giving kids whizzy gadgets and hoping they will pick up everything on their own is unlikely to work. Fifth, follow a true bottom-up approach. This is not development jargon, but has been put in-practice in ITK’s implementation; the director of the programme, Illam Bhagvath, ran a poll on ITK’s Telegram channel to decide whether to give volunteers leave during the summer vacation. He contextualised his decision depending on the teacher’s feedback. Finally, and this is something that even ITK doesn’t do yet– that is, adopt a teaching at the right level (TaRL) framework. This pedagogical approach, initially championed by the NGO Pratham, has been rigorously evaluated by researching including Abhijit Banerjee and Esther Duflo who have found highly impressive results (J-PAL, 2018).

The first time I got to know about ITK, I scratched my head: why did volunteers turn out in large numbers, and that too with dollops of motivation, despite getting such meagre payments for their time? I posed this question to Mr Bhagvath; according to him, “There are things which cannot be quantified in terms of money. For example, self esteem, recognition in the community, joy [of] being heard, emotional attachment with neighbourhood children, and better utilisation of academics that the volunteers learnt. We run the programme successfully because of such factors.” It is not clear whether this low-cost, high-motivation model can be replicated in other states. But by tapping the energy of 200,000 young women and directing them towards the biggest priority of our times – getting kids to learn well – Tamil Nadu has already achieved something special.