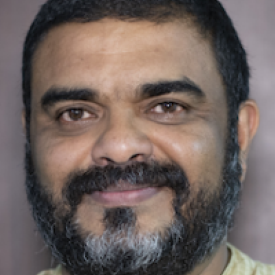 A government survey shows that 93% of rural households in India have access to a toilet and 96% of those having a toilet use them. However, critics point out contradictions between these data and micro-level assessments in different parts of India. Based on his experience of working for more than two decades in rural Odisha, Liby Johnson argues that an effective rural sanitation model requires both financial assistance to the households, and an integrated water supply.

There are studies and field reports that have analysed the Swachh Bharat Mission (SBM) in terms of coverage and use of toilets in rural India. The official government survey, the National Annual Rural Sanitation Survey (NARSS) 2018-19, shows that 93% of rural households have access to a toilet and 96% of those having a toilet use them. Critiques of the survey point out the contradictions between NARSS and micro-level assessments in different parts of India. Other studies point out issues related to how comprehensive the approach to sanitation needs to be, if SBM is to truly address the large-scale problems of ill-health, malnutrition, and poor quality of life caused by poor sanitation practices.

The Ministry of Drinking Water and Sanitation has already issued guidelines for follow-up components, such as the ‘Advisory on ODF Sustainability interventions’. It is quite likely that with the Prime Minister and his government taking charge for the second term, the sustainability of the first-generation SBM efforts will be given high priority. In this context, it is pertinent to throw light on some micro-level issues, based on more than two decades of experience in rural Odisha.

A rural sanitation model that works

Gram Vikas, the organisation I lead, started its work in rural sanitation in the year 1994. Our model of 100% coverage of all households in a village, all of them building and using household-level toilets and a bathing room with piped water supply, has been recognised as a best practice nationally and globally.

The integrated water, sanitation, and hygiene (WSH) intervention that we support rural communities with, is built on the following principles:

In 25 years (up to March 2019), the Gram Vikas WSH model has been implemented in more than 1,400 villages, covering close to 90,000 households. The villages are financed primarily through the sanitation and rural drinking water schemes of the government, and Gram Vikas has mobilised private resources to fill in gaps.

Over the past two decades, working with rural communities of different types, we have realised that bringing about attitudinal and behaviour changes towards safe sanitation is not easy. When we began in the mid-1990s, saying that every house in the village will have toilets, bathing rooms, and piped water, most people laughed. 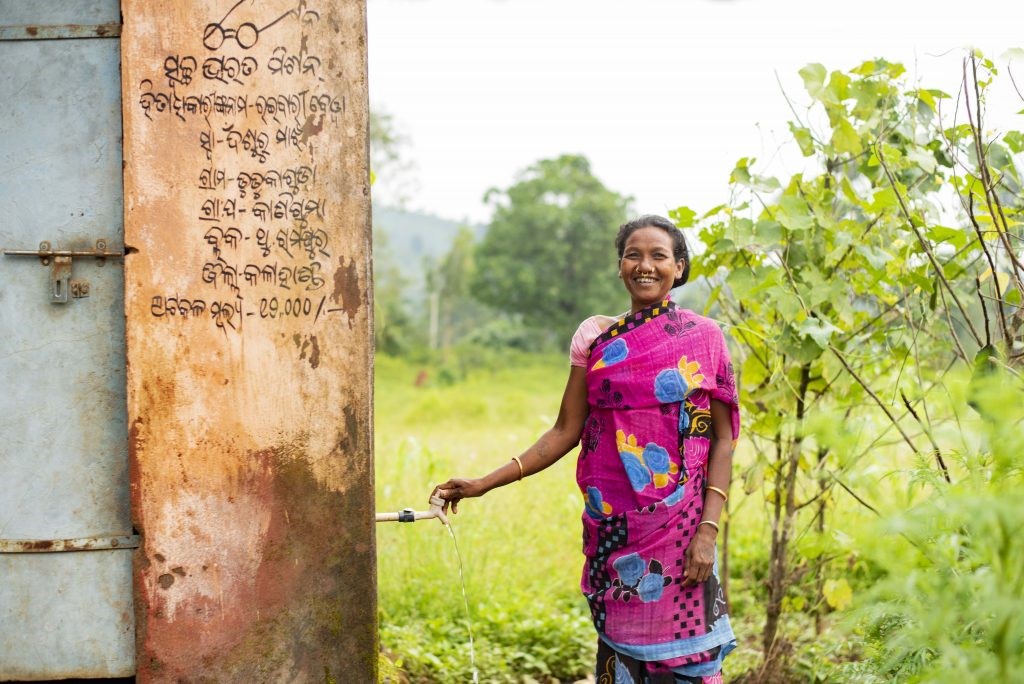 Raibari Bewa standing near the toilet/bathroom unit and collecting water from the third tap in Dudukaguda village, in Thuamul Rampur block, Kalahandi district of Odisha. On the walls, details of SBM benefits availed by her in Odia.

Between 1994 and 1999, we could cover only 30 villages – this resulted from our own efforts at motivating people, and not any felt desire on their part. Then started the gradual process of change – fathers of unmarried girls motivating future sons-in-laws’ village elders to take up the sanitation project; women taking the lead to convince their men to build toilets, and even stopping cooking for a day or two to make their husbands see reason; migrants who worked outside Odisha coming back to their own villages and motivating their parents, and so on.

When it comes to rural sanitation, government financial assistance matters

Between 1999 and 2007, the government’s support to sanitation, as part of the then newly launched Total Sanitation Campaign, was Rs. 300 per household, for below poverty line families. Support for community-led, piped water supply projects came much later, in the form of Swajaldhara scheme in 2003.

The prevalent thinking among policymakers in the early 2000s was that financial incentives were not necessary to promote rural sanitation. This was based on the limited success of the subsidy-led Central Rural Sanitation Programme that ran between 1986 and 1998.

Financial incentives to rural households for building toilets is more than a subsidy, it’s about society meeting part of the costs of helping rural communities build a better life. To compare, urban dwellers who may have built their own household toilets, do not pay anything for removing the human waste from their premises; municipal governments ensure sewage lines and treatment plants are set up. The cost of this (which is borne by the government) is not seen as a subsidy. And yet, the upfront payment made to rural households to help build toilets is looked down upon as wasteful expenditure.

Our experience has taught us that nothing can be further from the truth. First, actual coverage of usable toilets is likely much less than what the numbers show. Second, households will need support for repairs and upgradation of the already built latrines. In addition, there are two categories for whom the financial assistance must continue: those who, for various reasons, have not constructed latrines so far; and new households that have come up in villages that have already been declared open defecation free (ODF).

In most cases, where water is not available in proximity, the load on women to carry water has increased. A pour-flush latrine, the type mostly preferred, requires at least 12 litres of water per use. With 4-5 members in the household, the minimum daily requirement becomes about 60 litres, forcing women to collect at least three times the water they would otherwise collect. We have observed that without water in the household premises, women’s water carrying load increases to more than twice the pre-latrine times.

The addition of a bathing room, affords women more privacy, and a better way to keep themselves clean and hygienic. In most villages we have worked with, women especially, equate this part of their physical quality of life to what people in the city enjoy.

During the last few years, financial allocation for rural water supply has decreased. While the allocation to drinking water has reduced from 87% (2009-10) to 31% (2018-19), the allocation to rural sanitation has increased from 13% to 69% in the same period. This is definitely not a desirable situation, as noted by many.

Doing this – rather than pushing for large water supply projects across many villages – will give rural communities and local governments greater control over managing their resources and meeting the needs of every household in an equitable manner. The Swajal programme of the Ministry of Drinking Water and Sanitation, which talks about village-level, community-based water projects, is a step in the right direction. Much greater push is needed by the central government to ensure that the state-level apparatus moves to a more enabling and empowering approach in addressing rural drinking water needs. 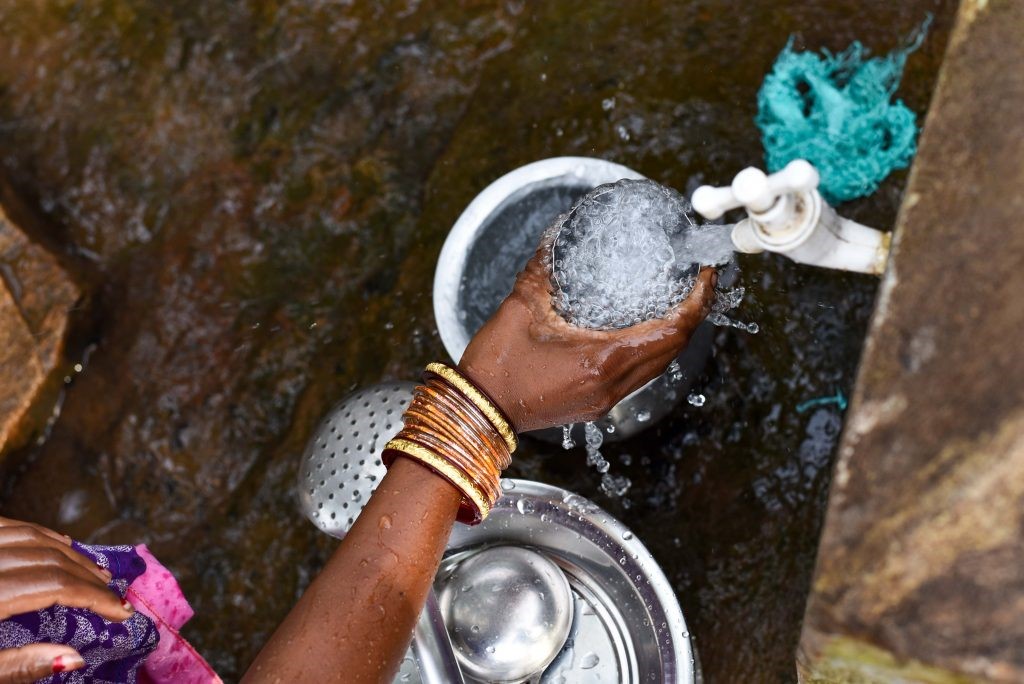 A woman collects the drinking water from the third tap in Simlipadar village in Thuamul Rampur, Kalahandi.

The water and sanitation infrastructure, when first built, contributes to a substantial decrease in water-borne diseases in villages. These are borne out of several studies (for example, Duflo et al. 2015) conducted in villages in Odisha.

After the initial round of benefits, we find that the infrastructure alone is insufficient to sustain health benefits. Additional efforts are needed to motivate people to adopt safe sanitation practices. The ensuing issues have been highlighted by many. For instance, changing long-standing beliefs and attitudes related to toilet use requires intensive hand holding, particularly for older people. There are other aspects of personal hygiene and sanitation, including personal habits, disposal of child faeces, and menstrual hygiene; these need to be addressed by demonstrating workable models, accompanied by education.

From Gram Vikas’ experience in Odisha, we have been able to enumerate several challenges that need to be addressed. Even when piped drinking water exists, households prefer to store drinking water. We have found that handling of stored drinking water is an area that needs better education.

Disposal of child faeces, especially by mothers who do not think the child’s faecal matter is harmful, is another area of concern. We are also coming across new forms of discrimination in households, where menstruating women are not allowed to use the toilets and bathrooms.

While issues related to personal hygiene and washing hands with soap are already quite widely discussed, the next set of challenges relate to safe disposal and/or managing liquid and solid waste at the household and community level.

A charter of demands

We hope that the next iteration of SBM will truly lead to a Swachh Bharat (clean India). Based on our experience, we would like to draw the following charter of demands:

(i) Strengthen the ways of providing household sanitation infrastructure.

(iii) Deepen and integrate WSH interventions for better health and nutrition outcomes at the community-level.

Swachh Bharat Mission: The long walk from rhetoric to implementation