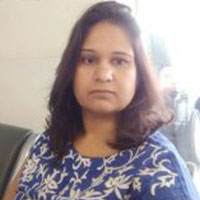 In this article, we turn our attention to personal credit extended by banks, with a view to informing policy actions on the personal insolvency provisions of the IBC. While banks are just one source of personal credit amidst a variety of institutional and non-institutional sources, they are the largest ‘formal’ source of credit, and therefore, the first likely users of the insolvency provisions. Understanding the nature and composition of personal credit extended by banks has implications for effectively designing the procedural aspects of insolvency resolution under the Code, as well as the institutions that enable the resolution. The decisions surrounding personal insolvency can help lay the foundation for a healthy market for individual credit.

Bank credit to the household sector

We use data from the ‘Quarterly BSR-1: Outstanding Credit of Scheduled Commercial Banks’ released by the RBI (Reserve Bank of India). This is a quarterly data series, from March 2014 till September 2016, which provides the composition of bank lending by organisation, occupation, loan size, interest rate bands, and regions. RBI classifies household (HH) sector credit into three categories: (i) individual borrowers; (ii) proprietary concerns, joint families and unregistered partnerships; and (iii) joint liability groups (JLG), NGOs (non-governmental organisations) and trusts. The data give us the following information on the size and composition of lending to this sector: 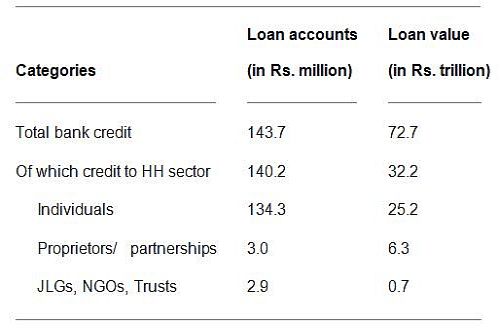 The remaining 33% are business loans spread mainly across three sectors: industries (12%), trade and transport (13%), and professional services (6%). Within industries, most loans are given to proprietors and partnerships, and at an average size of Rs. 930,000, these are relatively large. In trade, transport and services, average loan size is between Rs. 350,000 to Rs. 500,000 per loan.

Table 2. Distribution of loans across agricultural and personal categories by interest rate ranges 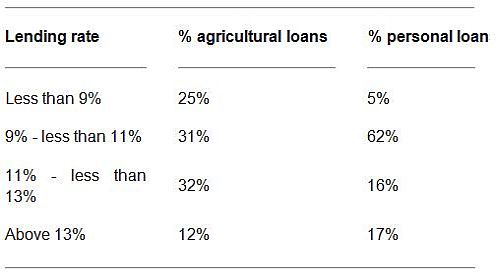 The size and nature of personal credit extended by banks has the following implications:

Most personal loans are secured loans, and banks might continue to use SARFAESI for recovery action on them. IBC may be used mostly in cases where a debtor has multiple unsecured loans, or where the debtor wishes to file for protection under the Code.

A large proportion of agricultural loans are given to low-income households. It is possible that many of them will qualify for the ‘fresh start’2. As most of these loans are in rural and semi-urban areas, design of access will be important for these households to be able to apply for such a waiver.

For those loans that do come to the IBC, the Insolvency Resolution Process (IRP) needs to be aligned with the borrowers´ profile. A resolution procedure for an individual borrower with low-value loans needs to be simple, low cost and time efficient. A simple form-based resolution mechanism, that requires little or no adjudication, may be desirable here. In contrast, resolution procedure for a large borrower or a proprietor may be closer in design to the process for a small company.

Reach, procedure, cost structure and role of the DRTs:

The size of the loans, their complexity, and their geographical spread will need to shape resourcing decisions of the DRTs. This will, in turn, decide their effectiveness as the adjudicating authority for personal insolvency cases. Today DRTs are designed to deal with bank loans above Rs. 1 million. There are only 6.5 million loan accounts in this size threshold in the entire banking system. In contrast, there are 140 million HH loan accounts, and their average size is Rs. 230,000. To effectively deal with resolution of such loans, the DRT rules of procedure, reach, infrastructure, as well as their use of technology for case management, will require a comprehensive rethink.

How the market for resolution professionals (RPs) may develop:

The role of RPs (the intermediaries defined under the IBC), as well as how the RP profession evolves for personal insolvency cases, will be critical. It is likely that, for high-value loans, a market for private RPs, concentrated in urban and metropolitan centres, will develop organically. However, for small-sized loans, which are geographically dispersed, the question of who will be the RPs and what role they will perform will require assessment, and perhaps even policy action. Further, even when RPs are identified, the process for their licensing, training and monitoring will need to be carefully formulated.

The institution of information utilities (IUs) is a core component of IBC design. The IUs are expected to facilitate the digitisation of credit transactions, and give such digital records sanctity as evidence in courts of law. Information in an IU can be used for establishing default, and initiating insolvency resolution processes. The structure of IUs, their mechanisms for accepting personal credit related information, and their standards of service will need to be aligned with the need to digitise a large number of small-value loan accounts given to individuals.

Role of the Insolvency and Bankruptcy Board of India (IBBI):

For personal insolvency, one of the biggest challenges for the IBBI will be dealing with consumer protection issues. Individual debtors will be vulnerable to biased advice on whether to file for insolvency, the process guiding the filing, and the process for resolution. The IBBI will have to step up to the challenge of protecting customer interests from misaligned incentives that stem from high-powered sales practices that have plagued other sectors of the retail financial market.

The design of personal insolvency systems is a complex problem, with challenges that are completely different from those faced by corporate insolvency systems. In this article, we have discussed only the market for bank credit. There will be a larger category of lenders, including money-lenders and friends and family, that may at some point wish to use the provisions under the IBC. Given the size and complexity of the personal credit market, and the paucity of effective recovery mechanisms, there is need for carefully planning and implementing the personal insolvency law sections of the IBC. This is unlike the approach followed for implementing corporate insolvency provisions where speed of implementation has been prioritised.

A version of this article has previously appeared on Ajay Shah’s blog: https://ajayshahblog.blogspot.in/2017/03/the-size-of-personal-bank-credit-in.html.

Thanks for sharing the incredible Article. It is very helpful to understanding loan services.\r\n\r\n\r\n