Why are children in India so short?

Several scholars across disciplines provide converging evidence of the key role of open defecation in explaining child stunting in India. This column summarises the key themes of a recent conference at the Delhi School of Economics on child height in India.

For two days, leading scholars of child height – economists, epidemiologists, nutritionists, and pediatricians – and government officials met at the Delhi School of Economics for a conference supported by the World Bank’s Water and Sanitation Programme to share research on an urgent question: why are children in India so short? Height is an important indicator of overall health and human development because the same things that make a child grow tall are what make a child grow smart. In presentation after presentation of the conference, sanitation stood out as an important part of this puzzle. Unfortunately, India has exceptionally poor sanitation: 60% of the open defecation that happens in the world happens in India alone, and almost 50% of the Indian population report not using a latrine regularly. Not only is open defecation an immense hardship for those who have no other practical option and an important issue of human dignity, the Conference on Sanitation and Stunting also presented an overwhelming convergence in the evidence showing open defecation as a key factor explaining widespread stunting in India. 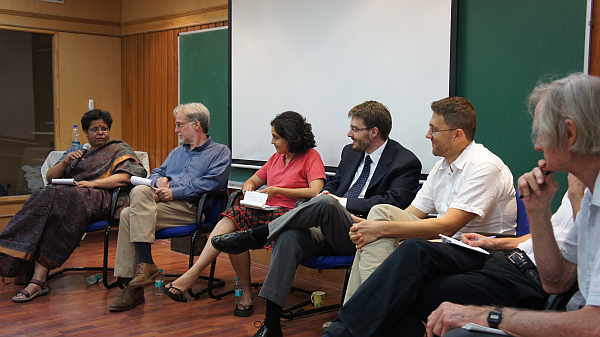 As Nisha Malhotra, an economist at the University of British Columbia, summarised, “open defecation doesn’t go away” – meaning that there is essentially no way of analysing data on Indian children’s height where open defecation does not emerge as a key factor explaining shortfalls in child growth. Research from different disciplines using varying methodologies produced similar conclusions.

There are very plausible biological links between exposure to fecal pathogens and diseases like diarrhea, nematode infection (also known as worms), and environmental enteropathy (a disease of the small intestine that prevents nutrients from being absorbed by the body), and studies by Checkley et al and Humphrey have shown that these diseases increase the odds of stunting. A recent meta-analysis, which summarises the results of all of the high-quality research available on water, sanitation, and hygiene interventions, provides suggestive evidence that water quality interventions are effective in reducing stunting (Dangour et al 2013).

Nutritionists at the conference also explored the role of nutrition in child stunting, and their studies showed that nutrition alone cannot explain stunting. A recent Lancet series on nutrition included an analysis showing that in the 34 countries that encompass more than 90% of the stunting burden, if the 10 most effective nutrition interventions were scaled up to cover 90% of the population, we would see only a 20% reduction in stunting (Bhutta et al 2013). Maternal and child nutrition are certainly very important for child health, but the research has shown that the combined impact of nutritional interventions and proper sanitation is more effective than either one individually.

Two completed Randomised-controlled trials show a causal effect of sanitation on stunting, others are underway

Randomised-controlled trials (RCT) are useful because they randomly assign treatment, and thus overcome many of the selection biases that plague other types of studies. Two RCTs of sanitation interventions, in Maharashtra (Hammer and Spears 2013) and Indonesia (Cameron et al 2013), show causal evidence of the effect of improved sanitation on increasing child height. Three other RCTs are underway in Orissa, Bangladesh, and Zimbabwe, two of which innovatively examine the effect of sanitation on environmental enteropathy by examining urine and blood samples.

The diverse array of research that was presented over the two days of the conference was very consistent both qualitatively and quantitatively. The sum total of the evidence discussed suggests that sanitation is very important for child height, and therefore for future achievement. Moreover, several different independent studies show remarkably similar estimates of effect sizes. The evidence from Cambodia and Bangladesh report effect sizes for sanitation that are just about what would be required for sanitation to explain the entire India-Africa height gap, and the evidence from Maharashtra reports one that is larger. Of course, there will still be much room for improvement after getting Indian children to the height of African children.

Research should now explore how to get people to use latrines, and how to design incentives so government officials prioritise sanitation

Since it is now clear from all the research presented in the conference that sanitation is very important for child height, research should now move on to looking into how to do something about it. Why have Cambodia and Bangladesh been able to achieve such huge reductions in open defecation in recent years, and can the same things be done in India? What are the cultural norms surrounding sanitation practices in India? Why do many of the latrines built by the Total Sanitation Campaign remain unused? What kinds of policies would stimulate behavioural change and bring about a reduction in open defecation? On the supply-side, how can we design incentives to improve construction quality and reduce the siphoning of funds? These are the kinds of questions that the research community should now be focusing on.