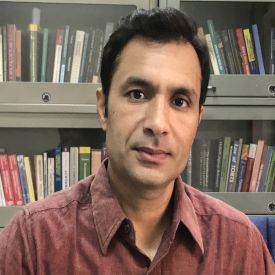 In the last two weeks, the Covid-19 pandemic has turned the world economy upside down, and all indicators point to one of the sharpest economic contractions in modern times. In this post, Ram Singh discusses the hard choices that lie ahead for India, and what government interventions are required to prevent the shock from turning a slowdown into a depression.

After 12 weeks of outbreak of Covid-19 in China, the world has woken up to the human and economic costs of the pandemic. In the last two weeks, it has turned the world economy upside down. Stock prices across the world have plunged as fears have gripped the US, UK, and European markets. Workers are worried about their jobs. Lenders and investors worry that companies will default on their debts. All indicators point to one of the sharpest economic contractions in modern times. In the first two months of this calendar year, industrial output in China fell by 13.5% and retail sales by 20%, compared to the same period the last year. The investment in fixed assets, such as, machinery and infrastructure declined by 24%.

Similar drops are likely in the US and Europe if the virus rages there. Most experts believe that the world economy will register almost zero growth in 2020 and will likely contract in the first half.

Unsurprisingly, governments and the central banks are setting out rescue packages that exceed the ones rolled out during the Global Financial Crisis of 2007-09. The US government and central bank – the Federal Reserve – together have announced fiscal and monetary packages of well over US$5 trillion to provide a lifeline to the companies and the financial markets, by setting up a credit facility to buy corporate bonds. Still, the volatility indices – indicators of market uncertainty – have reached the highest level since 2009. In such a situation, several countries have used stringent controls to suppress the pandemic and mitigate its catastrophic effects. In several countries, armies are called in to help police forces. Mitigation curbs the costs of pandemic, suppression seeks to stop its further spread.

India is no exception. Sensex and Nifty have fallen to their lowest levels in last 30 months. As overseas funds have pulled out, Rupee has tanked to a low of 75 against the US Dollar. In several sectors economic activities have come to a grinding halt. Lives and livelihoods are at stake.

The pandemic has stretched the best-resourced health systems, such as that of Germany, beyond their capacity. India’s health infrastructure is grossly inadequate. Therefore, the Centre is right to focus on the suppression of the disease. In his address to the nation on the night of 24 March, Prime Minister (PM) Modi has extended the current lockdown to the entire country for next 21 days. Several states had already imposed a complete closedown on schools, trade, and services except the essential ones. Such measures will help in suppressing the disease in its tracks and are the need of the hour. The PM’s message, “Corona yaani koi road par na nikley” (no one should go out on the road), amply demonstrates the gravity of the situation.

Hard choices lie ahead for India

The suppression also has its own costs. While the Covid-19 outbreak started with disruption on the supply side, it is having a huge toll on individual incomes and demand. The lockdowns mean shoppers cannot shop, employees cannot be at the workplace. Suppression of virus has already crippled a large range of economic activities across industries ranging from healthcare, pharmaceutical and electronic goods to IT (information technology), grooming, retail, hospitality and tourism, catering, entertainment, and real estate. The small firms and their employees, and contractual workers of big firms will be the worst hit. According to industry sources, more than 10 million people can lose their job in these sectors. For the past two years, the unemployment rate has been the highest in the last several decades.

Fast and extensive government interventions are required to prevent shock from turning a slowdown into a depression. Some very hard choices lie ahead for the Finance Minister (FM)-led Covid-19 Economic Response Task Force. On 24 March, the FM announced several waivers and relaxations in compliance requirements and deadlines under the tax and company laws. To help the MSMEs (micro, small, and medium enterprises), the trigger threshold for insolvency proceedings under the Insolvency and Bankruptcy Code (IBC) has been raised from Rs. 0.1 million to Rs. 10 million. However, the much needed fiscal package to salvage the economy is still awaited.

We should not be under any illusion. Even the agriculture sector and rural areas are not immune. India imports most of its phosphate-based fertilisers from China. The Chinese closedown can cause a shortage of fertiliser, leading to high input prices and dampening of agriculture output.

The unique advantage of India in drugs and medicines is also under threat. Indian pharmaceutical sector is a major supplier of affordable drugs and medicines to its own people and the poor across the world. However, Indian pharma companies have come to depend on China for supplies of low cost ‘active pharmaceutical ingredients’ (API) needed to produce final drugs. Covid-19 has disrupted the supply of APIs from China. Thus, Indian companies are already struggling to ensure normal supply of medicines.

Actions that the government should take

Several measures can help. Centre and the states should invest in healthcare to augment capacity for diagnostic tests and intensive care. Indian healthcare infrastructure is simply incapable of handling the surge in cases as experienced by China and European countries. In a timely announcement, the PM in his address has allocated Rs. 150 billion for testing facilities, personal protective equipment (PPE), ventilators, and other equipment needed to treat the victims of Coronavirus. The social and economic multiplier of such spending is very high.

Next task is to protect the employed from becoming unemployed or suffering an income shock if that does happen. Major employer sectors – hospitality, catering, retail and real estate – have been crippled by the outbreak. Due to fall in demand many companies in these sectors are struggling to pay their bills and service their debt. Some have cut down on production, fueling unemployment. Pervasive defaults can turn debts into non-performing assets. The problem is pervasive. Big companies in textiles, automobiles, civil aviation, transportation and logistics, oil, mining, and power sectors are also having to deal with the increased cost of capital in terms of cancelled orders, unsettled bills, and/or unsold inventories. In the absence of a helping hand, many companies could find it impossible to rebound even after the virus has been wiped out, leaving the market less competitive in the process.

While the working capital cycles of companies have got longer, the private debt market has frozen. Practically no deals are done in corporate debt. There are hardly any takers even for AAA-rated bonds. Clearly, liquidity is not flowing to where it is needed, even though the system has enough of it. The spooked market is resulting in cash hoarding. A rate cut and additional open market operations will help add to the comfort and ensure that the situation does not worsen.

Besides, the government and the Reserve Bank of India (RBI) should seriously consider a comprehensive regulatory forbearance for banks and NBFCs (non-banking financial companies), and moratorium on loan repayment by small firms. Unlike developed countries, India does not have automatic economic stabilisers, such as universal health coverage, unemployment insurance, etc. Therefore, it is important that no company, small or big, faces the risk of closure or bankruptcy because of Covid-19. The RBI should offer banks cheap funding to lend onward to their clients. Once the crisis is over, there will be scope to recover some of the losses for all stakeholders.

Then there is a case for direct cash transfers to the poor and those who lose employment. However, the system has limited scope for this in the absence of a precise database to identify the needy, especially in urban areas. Some of the rural poor are easy to target. Exceptions apart, billions of beneficiaries of MNREGA1 (Mahatma Gandhi National Rural Employment Guarantee Act) jobs and most of the small and marginal farmers identified under PM-KISAN (Pradhan Mantri Kisan Samman Nidhi)2 are unquestionably poor. Transfers made to these groups and the old-age pensioners, as well as 35 million construction workers enrolled with the labour welfare associations, will give a boost to demand.

The above measures will require the government to relax the fiscal deficit targets by 1-1.5%, giving it more than 3 billion of funds to support the economy. The government decision to raise duty on petrol and disease is welcome. It will generate much needed funds that can be used to fight the virus and its consequences. Still, governments will have to issue piles of bonds. The RBI can buy bonds to keep yields low and markets orderly. Fortunately, the crude price has sunk to US$25 a barrel, the lowest level in nearly two decades. Agriculture is also expected to grow and at moderate rate. So, inflation is not a concern. There is little danger of it taking off in the short run.

The proposed approach is not without drawbacks. Public and corporate debt will soar. Some of the intended benefits may go to the non-poor. Regulatory forbearances may get extended to badly run firms as well. Nonetheless, it seems better to address the current crisis rather risk a recession.

Lessons from the pandemic and future outlook

The pandemic offers several lasting lessons to companies and governments. It has exposed vulnerabilities of international trade and global value chains (GVCs) involving production of different parts of a product in different countries. Firms try to optimise by using GVCs to secure supply of components needed for production. For example, a smartphone requires chips, accelerometers, gyroscope, camera, LCD screen, battery, and hundreds of other components. These parts are then transported to one location for assembly of the final product. Though the GVCs enable companies to reduce costs and increase the scale of their operations, they render the production processes highly vulnerable – Covid-19 attack in China and South Korea, has disrupted supply chain for smartphone, computers, car, medicines, and several other products.

With several companies shifting out of China, GVCs are bound to shift in the process. We can take advantage of the situation. However, it will require massive investments to improve infrastructure and logistical facilities and regulatory reforms. At the moment, risks posed by Covid-19 to Indian economy are serious and numerous. The economic and health costs of the pandemic increase exponentially with the number of infections. To minimise these costs, focus of the government and society should be on keeping the population healthy and safe. The coordination among the Centre and the state governments, hospital chains, civil society groups, corporate social responsibility teams, and the media will be crucial for our fight against the virus attack. The future of the economy will depend on how the situation unfolds in the next week or so.