The adoption of flexible inflation targeting by the Indian government and RBI is a landmark change in the country’s monetary policy. In this article, Renu Kohli - a macroeconomic policy specialist - discusses the risks associated with the move. She reasons that the national and global macroeconomic environment and the timing of transition to the new regime are crucial to its success.

In January 2014, the Urjit Patel Committee Report, which was appointed to ‘Revise and Strengthen the Monetary Policy Framework’, proposed a new framework for monetary policy - flexible inflation-targeting (FIT). The new framework has been recently formalised as an agreement between the government and the Reserve Bank of India (RBI), making price stability the primary goal of RBI, while keeping in mind the growth objective. The inflation target in the year starting April 2016 and beyond will be 4% (+/-2%) and achievement of this inflation objective or otherwise, will determine the success or failure of RBI’s actions henceforth. Earlier, RBI accepted one of the key recommendations of the Committee -shifting to consumer price index (CPI) inflation1 as the clearly defined nominal anchor2, and beginning of a two-year ‘glide path’ to prepare the initial conditions ahead of formal adoption of FIT. Against the requisites for full implementation of inflation targeting (IT) (Roger 2010), India’s shift to FIT has only just begun: A public announcement of a two-year glide path– 8% headline CPI inflation by January 2015, 6% by January 2016 with eventual medium-term target of 4% with ±2% band, followed by the recent formal agreement between the government and RBI. However, essential institutional support structures and required legislative changes for successful FIT are yet to follow.

It must be underlined that not one, but two structural changes have taken place with transition to FIT: One, price stability is now the primary policy objective. Two, the nominal monetary policy anchor is CPI, as against producer price inflation (Wholesale Price Index (WPI)) previously. What risks do these changes pose? I discuss some key aspects in this article (Kohli 2015).

Implications of inflation targeting in India

As with most reforms, the macroeconomic setting matters insofar as timing is often quite critical for acceptance and eventual success. For example, a strong economic cycle characterised by buoyant tax revenues, robust incomes and profits, etc. facilitates reforms that otherwise may be costly; the opposite is true in hard times that can complicate, slow down, or even overturn the reform process; while on other occasions such as a currency, banking or financial crisis, reform is unavoidable, making the macroeconomic context irrelevant. While the Urjit Patel Committee Report extensively considers India’s inflation performance, a discussion of macroeconomic settings and their bearing upon the timing of the transition does not figure. Arguably, the stressed national and global macroeconomic environments, relief of oil price decline notwithstanding, make the shift a risky policy option.

Figure 1 and Table 1 give a snapshot macroeconomic preview at the time of transition to IT. Summarily, both CPI and WPI inflation were high (9.9% and 6.4% respectively in December 2013); fiscal deficit and current account deficit enlarged; while the exchange rate started to depreciate from 2011-12 in real and nominal effective terms, following large appreciations in 2010-11.The external balance sheet deteriorated in stock terms (Table 1, Column 7); balance sheet distress of firms and banks was considerable – 10% of total loans were stressed in March 2014, and 23.9%of the stressed sectors’ total loans were strained. Finally, the global economic environment was, and continues to be adverse and uncertain.

Figure 1. Inflation and interest rates in India at the time of transition to inflation targeting 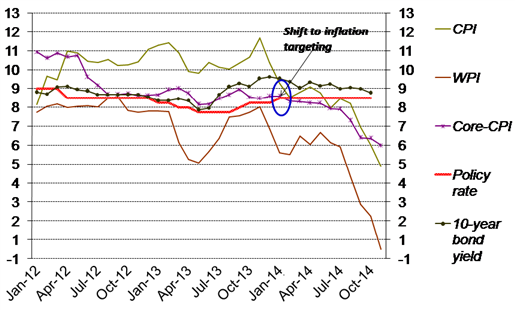 Table 1. India´s macroeconomic profile at the time of transition to inflation targeting

The two changes imposed by the new monetary policy framework and the macroeconomic context provide a perspective on the possible output sacrifice. Critically, the Urjit Patel Committee Report was silent and nontransparent about the disinflation costs during the transition to FIT; although these were balanced against the speed of disinflation to reach the medium-term inflation target, the estimated declines in Gross Domestic Product (GDP) in the process were not published.

Nonetheless, two distinct components of output loss can be inferred: The first constituent is from a general deflationary bias due to monetary tightening3- output sacrifice which is recoverable as the business cycle turns. The second loss component occurs from the shift to the much-higher CPI inflation as nominal anchor; this constitutes a permanent loss in output due to a lasting increase in the real cost of capital - a structural shift4. Its size is crudely equivalent to the consumer-producer inflation gap, an average 419 basis points5 during January 2012-November 2014. This cost disadvantage comes at a critically low point of the economic cycle when firms are most vulnerable with limited abilities to withstand an enduring shock of this nature. The real output effects will play out and manifest beyond the business cycle, making visible the resultant, permanent decline in GDP as some investments turn unviable. Given the larger significance of cost of capital for manufacturing, the risk is of an unintended resource-shift away from the sector.

The relevance of the macroeconomic context is observable from the visible balance sheet distress; for example, stressed advances (bad/ restructured loans) increased from 10% to 10.7% of the total advances between March and September 2014; manufacturing grew just 0.7% in April-October 2014 over a -0.1% contraction in the same period last year; bank credit (non-food) growth at 4.3% in March-November 2014 is nearly half of last year; and the cumulative 75 basis points of monetary tightening6 during September 2013-January 2014 all but failed to transmit to banks struggling with tepid loan demand. For manufacturing firms to recover from cyclical and structural shocks of this nature could take very long in an environment of surplus global capacity across countries. If disinflation extracts too high a price in the initial stages of inflation targeting, risks to the next stages of implementation could increase.

The Indian political economy context, which must adapt itself to support monetary policy, is essentially nonresponsive. Market structure reforms 7 to allow free, efficient functioning of markets and pricing to balance demand-supply forces have long been half-hearted, delayed and interminably postponed. This could imply prolonged, extraordinary burden upon monetary policy, which could be forced to remain tighter than otherwise. If supply-side responses are not forthcoming, in conjunction with the low-growth conditions at the time of transition to FIT, the economy could be trapped in a vicious circle, breaking out from which could be difficult due to fear of undermining policy credibility. Such a flexible supply response scenario is hard to contemplate in the present political economy structure. It could, of course, also be the case that IT could itself compel such supply-side reforms.

Strong institutional support is essential for IT. The most fundamental support is from fiscal policy due to its close and immediate relationship with aggregate demand. Fiscal dominance8 is very often a key inflation driver in emerging market economies (EMEs) including India; it can negate monetary policy effort and potentially undermine the most credible of central banks. Indian fiscal history is quite discouraging in this regard. Adherence to fiscal rules is not sufficiently entrenched, with abandonment, or pause, each time the business cycle wanes, growth slows and revenues decline. For instance, a pause was announced in 2009-10 to combat the global financial crisis shock, while return to the fiscal consolidation9 path under the Fiscal Responsibility and Budget Management Act 2003 was delayed. A new path was drawn by the Kelkar panel in late-2012 to restore the health of public balances by 2016-17, with the government on course to achieve this since.

However, history has once more repeated itself as the 2015-16 deficit target (3.6% of GDP) was recently raised to 3.9% in order to boost the growth rate. The risk from such political responses is quite high. While institutional support by way of tight fiscal rules is needed in the next stages of FIT, the required fiscal path could be demanding. Unless growth picks up quite substantially to relieve the fiscal burden and relax budgetary constraints, there could be further temptation to delay or breach fiscal targets; or political support for FIT could weaken.

In examining the Brazilian and Chilean cases, Mishkin (2004) concluded that inflation targeting is more complicated in EMEs and isn’t really a panacea, but if done right it can be a powerful tool to help promote macroeconomic stability in these countries. He underlines that developing strong fiscal, financial and monetary institutions is very critical to the success of inflation targeting in these countries. In this article, I reason that the timing of India’s transition to FIT could pose risks to its successful implementation. If the output sacrifice proves too large, the burden could impact support and evolution of adequate institutional structures that are necessary to carry forward and build upon the credibility of the new monetary policy regime.

The poor and uncertain post-crisis external environment has also cast a shadow of doubt over the pre-crisis evidences on inflation and output performances under IT-regimes10. These studies are overwhelmed by the phase of Great Moderation11 and sustained, high Chinese growth rates of the period, which fueled rapid economic growth in many of the countries who shifted to IT at the same time, and which facilitated sharp reductions in net public debt-GDP ratios. The larger macroeconomic shocks of the post-crisis period have been recently employed to re-examine IT experiences across countries by economists from the Bank of International Settlements (Banerjee et al. 2013); they find that non-IT EMEs enjoyed faster growth rates of 7.13% on average in 2000-06 and an average 4.13% subsequently (2007-12). On the other hand, IT-EMEs grew more slowly in these two time periods, at an average of 4.51% and 3.65% respectively. For India’s adoption of FIT, the national and international environments could be very critical in the light of these doubts and risks.