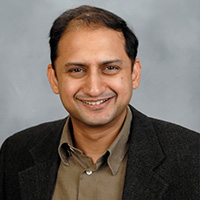 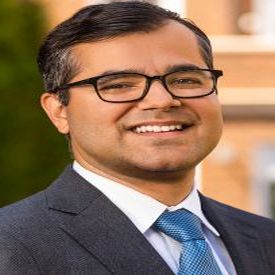 Non-financial corporations in emerging market economies increasingly rely on foreign currency debt, and are exposed to sudden stops in capital flows and currency depreciations. Analysing data on 1,786 Indian firms during 2004-2019, this article shows that favourable global funding conditions are a much more significant determinant of foreign currency borrowing than firm-level factors. Further, it suggests that RBI’s macroprudential policies have been effectively mitigating these risks.

Non-financial corporations in emerging market economies (EMEs) increasingly rely on foreign currency debt for financing. Since the Global Financial Crisis (GFC) of 2008, the amount of dollar-denominated debt of EME corporations has quadrupled1. Research has shown that interest rate differentials between EMEs and the US have contributed significantly to this phenomenon (Bruno and Shin 2017). In essence, EME corporations prefer to borrow in foreign currency when there is a ‘carry’, meaning foreign interest rates are low relative to domestic interest rates. This carry trade borrowing leaves the firms exposed to sudden stops in capital flows and associated currency depreciations (Bruno and Shin 2020). More broadly, the accumulation of external debt on private balance sheets can lead, or contribute, to currency depreciation spirals and thereby pose risks for EME growth and financial stability (Acharya et al. 2015, Du and Schreger 2017). These include risks to domestic growth from large corporate distress and spillover effects on the domestic financial system.

Therefore, attention has naturally turned to policy responses to these risks posed by the build-up of foreign currency debt. Theoretical contributions suggest that macroprudential regulation can mitigate these risks (Acharya and Krishnamurthy 2019, Erten et al. 2020). However, such regulation might have leakages or unintended consequences that undo its intended effects (Ahnert et al. 2020). Ultimately, uncovering the effects of such policies requires empirical analysis.

In new research (Acharya and Vij 2021), we do this by studying a specific instance of macroprudential regulation2 targetted at the foreign currency borrowing of non-financial corporations. We examine the case of India which, as is typical of EMEs, has seen a sustained increase in dollar debt issued by non-financial corporations. Figure 1 shows the total amount of foreign currency debt outstanding and the Indian rupee/US dollar foreign exchange rate for the period between 2004 and 2019. Although the rupee has steadily depreciated against the dollar, the outstanding stock of dollar debt has steadily increased. 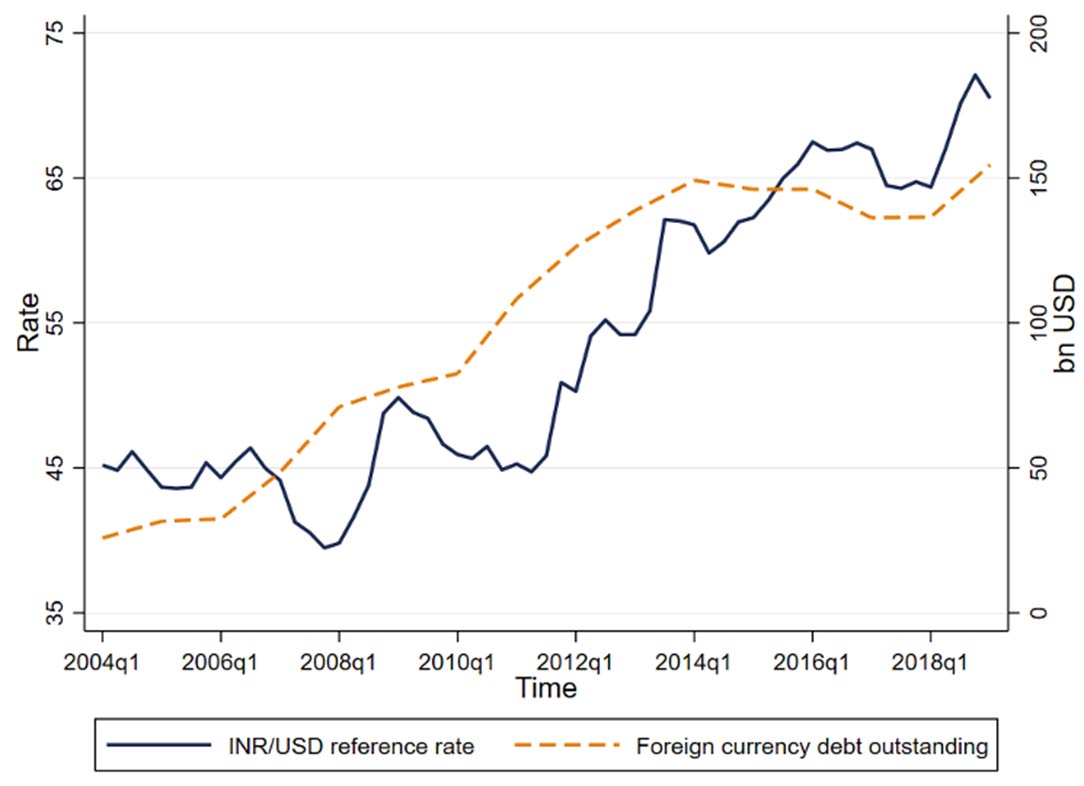 Note: The figure shows the evolution of the rupee/dollar exchange rate, and the stock of foreign currency debt outstanding for the period March 2004-March 2019.

Source: Exchange rate data are from Datastream and data on outstanding debt are from the Ministry of Finance.

In response to the rise in dollar debt, in 2015, India’s central bank, the Reserve Bank of India (RBI), lowered the maximum permitted interest rate at which Indian borrowers could borrow in foreign currency debt markets. This move was in the aftermath of the ‘taper tantrum’ episode of May-August 2013 in which India faced significant capital outflows and currency depreciation3. The aim of reducing these interest rate caps for foreign currency debt was to restrict access to only those firms that could borrow at relatively low interest rates – presumably higher quality and lower risk borrowers – as these borrowers would be less likely to face rollover problems in a sudden stop.

To examine the dynamics of corporate foreign currency borrowing and the effects of the macroprudential regulation, we construct a detailed dataset on Indian firms that borrow abroad building on publicly available data from the RBI. We have data on every instance of foreign debt issuance (including amount, maturity, and debt type), matched to accounting and stock market data on the borrowing firms from Prowess. Our final sample includes 1,786 firms that, on average, borrow twice during our study period of 2004 to 2019. In our sample, 5% of the firms borrow more than 10 times over the period.

We first examine the factors that explain borrowing in external markets. Some hypothesised reasons for borrowing abroad are: (1) Exporters can naturally hedge their foreign currency borrowing through their revenues; (2) Firms investing in foreign assets (for example, oil and gas companies) want to finance those assets in the same currency (Caruana 2016); and (3) Firms borrow abroad at a cheaper interest rate and invest it locally at higher interest rates (Shin and Zhao 2013). The third reason is a corporate carry trade that is profitable if the firm can unwind the trade before the currency depreciates or if the central bank steps in to prevent depreciation. 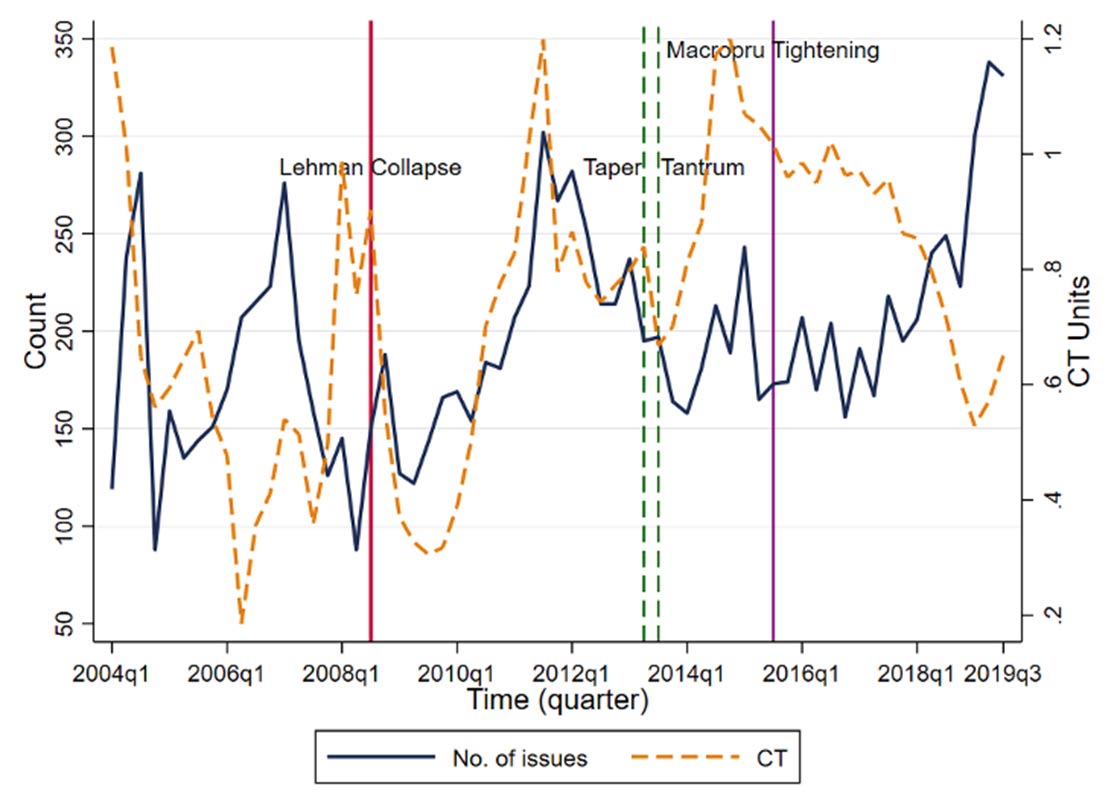 Notes: (i) The figure plots the total number of foreign currency debt issues each quarter against CT, a proxy for the profitability of the dollar carry trade. CT is the difference in three-month interest rates between India and the US scaled by the implied volatility of three-month foreign exchange options. (ii) The sample period is from January 2004 to September 2019.

Stock market data show that the returns of Indian foreign currency borrowers become more sensitive to movements in the rupee/dollar exchange rate as they borrow more. This indicates that the borrowers are not fully hedging the foreign exchange risk that comes from the new debt. Firms that are more likely to borrow when the carry trade is more profitable – whom we call ‘carry trade borrowers’ – see the most increase in risk. 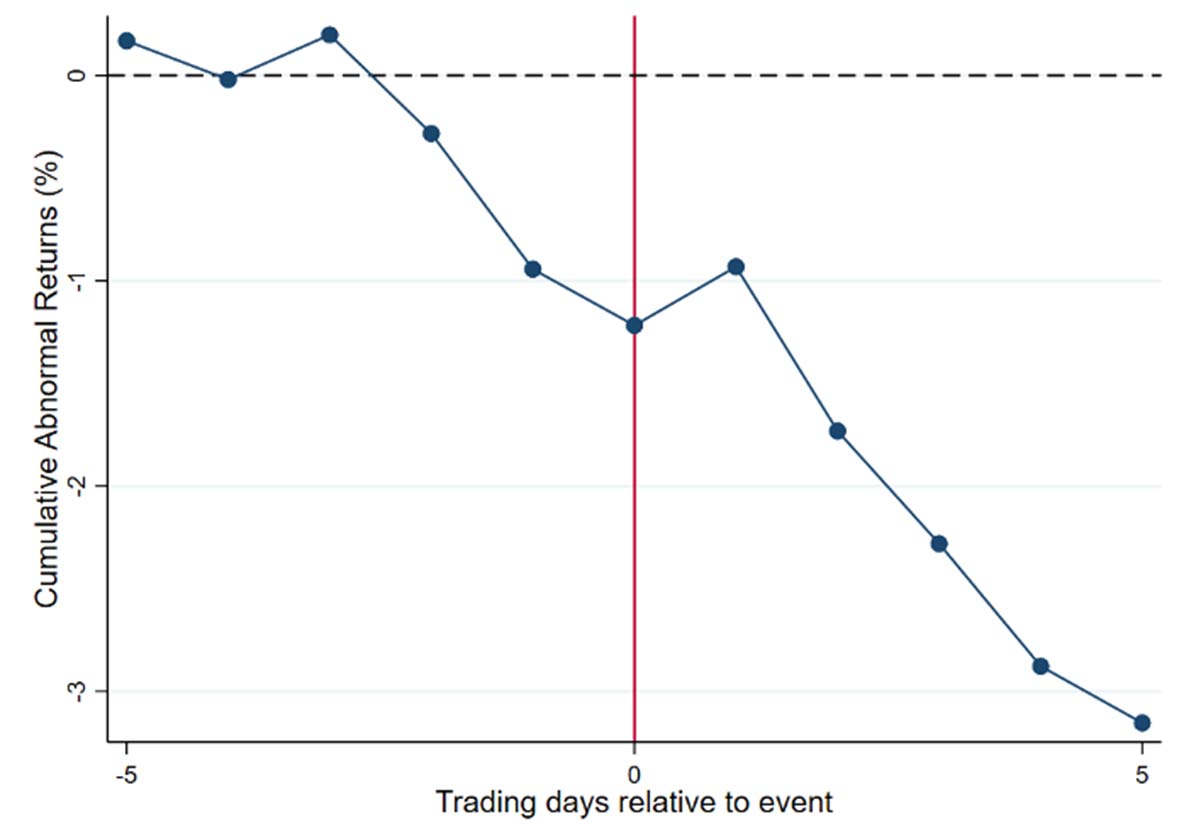 Notes: (i) The figure shows the cumulative abnormal return (CAR) for stocks of foreign currency borrowers that borrow when the carry trade is more profitable relative to other foreign currency borrowers. (ii) The event date is 19 June 2013, a date on which Chairman of the Federal Reserve, Ben Bernanke, indicated that tapering of quantitative easing would commence later in 2013. (iii) A multivariate market model is used for estimating abnormal returns with the NIFTY return proxying for the market return while Indian rupee/US dollar return proxies for FX return. The estimation window is 180 calendar days and ends five trading days before the event date.

In response to the taper tantrum, many EMEs significantly altered their macroprudential policy for the external sector by tweaking the capital control frameworks (Bergant et al. 2020). India was one of them. We focus on the RBI’s reduction of the maximum interest rate at which firms could borrow abroad, in 2015. We find that this macroprudential policy action had significant effects on carry trade borrowing. Following the reduction in the interest rate cap, carry trade profitability no longer significantly explains foreign currency borrowing. We show that following the policy change, firms with higher interest expenses and those with a higher import share of raw materials were the ones most affected. This shows that the regulation worked as intended, by preventing the ex-ante riskiest borrowers from borrowing in foreign currency to take advantage of a carry trade.

We further confirm the efficacy of the macroprudential regulation by testing the equity market reaction of foreign currency borrowers during periods of market stress following the interest rate cap change. We conduct tests analogous to our taper tantrum analysis for the period of market stress at the beginning of the Covid-19 pandemic in March 2020. For EMEs, this period was characterised by unprecedented portfolio outflows and tightening of financing conditions (Corsetti and Marin 2020). In our event study analysis, we find that carry trade borrowers do not do any worse during this crisis compared to other borrowers. This suggests that under the new macroprudential regime, the risks arising from carry trade borrowing by Indian corporates has been substantially mitigated.

Overall, our results indicate that favourable global funding conditions are a much more significant determinant of foreign currency borrowing by EME corporations than individual firm-level factors. As we entered a new cycle of US monetary policy easing owing to the Covid-19 pandemic, foreign currency borrowing might have accelerated along with the attendant risks. As this cycle is turning with the firming up of US long-term interest rates, excessively risky foreign currency borrowing by corporates might hurt domestic growth and financial stability down the line as capital flows to EMEs retrench. Our analysis suggests that the proper targetting of capital controls in macroprudential regulation of the external sector can play an important role in reducing such vulnerability.

I4I is now on Telegram. Pleaseclick here (@Ideas4India) to subscribe to our channel for quick updates on our content