Is the policy focus shifting from school education to higher education in India? 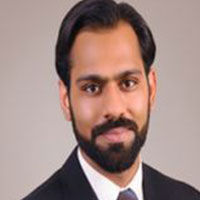 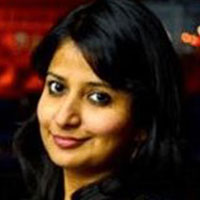 Given the new initiatives of the central government such as ‘Make in India’, ‘Skill India’ and ‘Digital India’, it was widely expected that the share of GDP (Gross Domestic Product) devoted to education would be increased. Data on expenditure – in nominal terms – presented in the 2015-16 union budget seems to suggest that the current government, akin to the previous government, has indeed laid down a strategy of consistently increasing the investment in social services1. However, if we delve deeper into the data, a murky picture emerges. 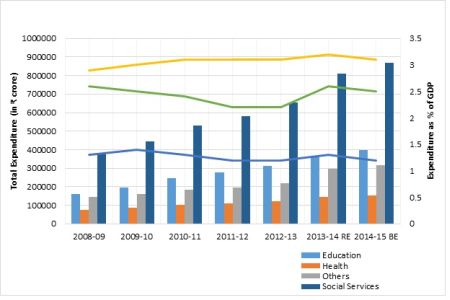 The government has, in fact, reduced the outlay on the education sector overall (school and higher education combined). If we consider the change in budget estimates from 2014-15 to 2015-16 in nominal terms, both plan and total outlay2 have declined by almost 20% (Figure 2).

If we consider the change in budget estimates in 2015-16 from the revised estimates3 of 2014-15 – again in nominal terms – both plan and total outlay expenditure on education have declined by 2-3%. It is important to note that after accounting for inflation, the decline in budgetary allocation to the education sector would be more pronounced. 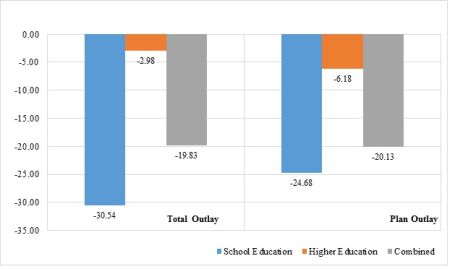 However, the prevailing public discourse seems to have missed the nitty-gritty of the problem and has almost pronounced the 2015-16 budget to have put the education sector on a high-growth path. This has led many into making confounding conclusions that the government has made a decision to focus more on higher education - and away from school education – in an attempt to target the young population who would otherwise shift their base outside India, thereby affecting the economy. Some have erred in positing that by setting up new IITs (Indian Institute of Technology) and IIMs (Indian Institute of Management), quality workforce will enter the market and benefit industry. This is partly because of a lopsided comparison of the 2014-15 budget estimates of plan expenditure on education with the 2013-14 revised estimates of plan expenditure on education, and partly because the argument is based on nominal rather than real values of plan expenditure. Therefore, the fact that the plan outlay on higher education has increased significantly (by 22%) relative to the 10% decrease in plan outlay on school education presents a warped understanding of the issue.

It has become a regular practice of the government to revise (mostly downward) the figures that are originally presented in the budget statement, considering fiscal constraints somewhere in the middle of the year. It is anticipated that the budgetary plan outlay of Rs. 15855.26 crores allocated to higher education will also face a similar cut. Further, a closer look at the budgetary allocation figures of the last few years reveals two important issues. There has been a retreat of central funding to higher education under many heads that were crying for resources. Secondly, solving the perennial problem of underutilisation of allocated funds requires urgent attention of the government.

While in 2013-14, the budgetary allocation under the head of ‘improvement in salary scale of university and college teachers’ by the UPA-II (United Progressive Alliance) government was more than Rs. 2,000 crores4, the debut budget of the BJP (Bharatiya Janata Party) government – announced in July 2014 – reduced the allocation by almost 17.24%. The trend of budgetary cut under this head has continued in 2015-16 with a paltry Rs. 1,200 crores being allocated to this head - almost one third of the budgetary outlay of 2014-15. What deserves credit is the substantive allocation to support skill-based higher education including community colleges (these were not allocated any funds by the previous government), which exemplifies the government’s commitment to the ‘Skill India’ campaign.

Compared to previous years, the government has decreased the budgetary outlay for provision of ‘technical education’ by 1.4% in nominal terms. While the government is committed to setting up new IITs and IIMs - the Rs. 1,000 crores corpus which is set aside for this purpose is more than double the allocation announced in the previous budget - plan outlay on the existing IITs has been substantially reduced. The plan grant (or capital grant) from the government - which covers the cost of buildings, laboratories, libraries and other infrastructure - was decreased significantly, ignoring the need of regeneration of ageing infrastructure of the existing IITs, as pointed out in the 2011 Kakodkar committee report.

Any plan expenditure for assistance to state governments for degree colleges was withdrawn in the maiden budget of the new government and the trend has continued in the current budget. Total Strategic Assistance for State Higher Education is provided through the Rashtriya Uchcha Shiksha Abhiyan (RUSA) and an amount of Rs. 1,155 crores is allocated for this purpose. However, there is a sharp fall in the budget allocation to RUSA in the 2014-15 budget in comparison to the 2013-14 budget. This points towards an increase in financial responsibilities of the state governments in terms of using their own funds for implementation of schemes. However, the poor spending capacity of the states and the underperformance of state-level public service provision owing to poor quality and corruption point towards sheer inefficiency and incapability of the state governments to step up.

Notwithstanding the fact that it is the constitutional responsibility of the government to provide school education to a burgeoning population, this sub-sector has witnessed a huge dip in budgetary allocation. Budget estimates of combined plan outlay of the centre and states towards school education in the present union budget saw a decline of almost 25% compared to the previous year. On a disaggregate level, there was no percentage change in the total central plan outlay, while the decline in the state outlay was as much as 26% (Figure 3).

Source: Union budget 2015-16.
Note: The outlays presented are budget estimates and the change is in percentage terms.

Most of the students who are currently transitioning into the secondary and higher-secondary classes would have entered the labour force by 2017. The drastic fall in budgetary outlay for school education, driven by a 40% reduction in the outlay for secondary education, seems contradictory to the thrust on skill-development campaigns.

Some may argue that fulfilling the objectives of skill development, and providing employment to the ever-increasing number of job-seekers, along with maintaining the quality of school education is a shared responsibility of the government and the private sector. It is also known that inadequate funds to finance school infrastructure and teachers’ salaries, among a number of other reasons, are important factors contributing to high drop-out rates in schools. So, the reality is that private schools which are able to maintain a certain minimum level of quality of education are unaffordable to the marginalised sections of the society because of which they play a more exclusive rather than an inclusive role. On the other hand, the relatively affordable private schools are severely constrained in the provisioning of quality school education. In the last two five-year plans, the Ministry of Human Resource Development (MoHRD) proposed a framework to engage with the private sector to provide quality school education keeping in mind broader social goals of equity and inclusion. However, lack of utilisation of the allocated budget under the public-private partnership (PPP) in school education in the 11th Plan suggests that the private sector is hesitant in venturing into this field.