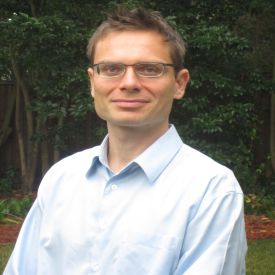 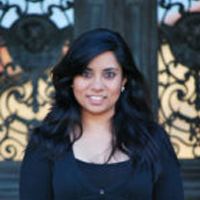 In this article, Bloom and Patnaik bring together research that analyses management practices of firms, and how they relate to firm productivity and performance. They highlight the importance of undertaking a large-scale representative survey of management practices in India.

The productivity of firms in developing countries appears to be extremely low. Work by James Tybout (2000) and the World Bank (2003) highlights issues around infrastructure, informality, regulations, trade policies, and human capital that reduce the productivity of firms in developing countries. In addition, there has also been a long-held belief that poor management practices are an important driving force in holding back the productivity of developing country firms. Even among industrialised countries, management may affect productivity. For example, Toyota’s management system is credited with its productivity advantage over US auto firms, and the training of Italian managers under the Marshall plan had long-term effects on the performance of Italian firms in the post-World War II period (Giorcelli 2016). In developing countries, Bruhn, Karlan and Schoar (2013) have examined the role of consulting services in Mexico, while McKenzie and Woodruff (2013) have studied business practices in firms in Bangladesh, Chile, Ghana, Kenya, Mexico, Nigeria, and Sri Lanka, finding that management practices matter for firm performance and survival.

In the World Management Survey, Bloom and Van Reenen (2007) collected cross-country data on management practices in medium and large manufacturing firms from a wide range of developing and developed countries. These phone surveys score firms on monitoring practices (collection and processing of production information), target-setting practices (ability to set coherent, binding short- and long-run targets), and incentive practices (merit-based pay, promotion, hiring and firing). They find that firms in developing countries like Brazil, China, and India have significantly lower average management scores than firms in developed countries such as the US, Japan, and Western Europe (see Figure 1). The lower level of average management practices in developing countries is attributed to a persistent, thick tail of badly managed firms. The evidence surveyed in Bloom, Sadun and Van Reenen (2012) suggests a key factor behind this is low levels of competition and high levels of family ownership in developing countries, which leads to badly-run firms not exiting as they would in developed countries.

Figure 1. Management appears to be better in rich countries 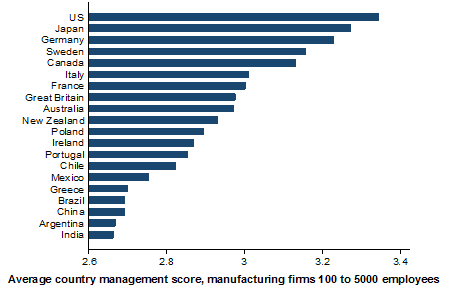 Bloom et al. (2013) provide the first experimental evidence on the importance of management practices in large firms. They took large, multi-plant Indian textile firms and randomly allocated their plants to ‘treatment’ and ‘control’ groups. Treatment plants received five months of extensive management consulting from a large international consulting firm. This diagnosed opportunities for improvement in a set of 38 operational management practices during the first month, followed by four months of intensive support for the implementation of these recommendations. The control plants received only the one month of diagnostic consulting. The authors find that the treatment intervention led to significant improvements in quality, inventory, and output.

Within the first year, productivity had increased by 17%. Based on these changes, annual profitability was imputed to have increased by almost Rs. 20 million. These better managed firms also appeared to grow faster, with suggestive evidence that better management allowed them to delegate more and open more production plants in the three years following the start of the experiment. There were also network effects – these firms spread management improvements from their treatment plants to the other plants they owned, indicating revealed preference evidence on the beneficial impact of introducing these practices.

Given this large positive impact of modern management, the natural question is why firms had not previously adopted these practices. The evidence suggests that informational constraints were the most important factor. For many simple practices, firms that did not employ them didn't believe the practices would improve profitability. For example, on measuring quality and defects, the owners claimed their quality was as good as other local firms and thus they did not need to introduce a quality control process. For less common practices, like daily factory meetings, standardised operating procedures, or inventory control norms, firms were simply unaware of these practices. Although these types of lean management practices are common in Japan and the US, they appear to be rare in developing countries.

Competition has not forced such badly run firms to exit and has not allowed well-run firms to take over instead. The reason for the first is that competitive pressures were heavily restricted: imports by high tariffs, entry by the lack of external finance. On the growth of well-run firms, managerial time is constrained by the number of male family members. Non-family members are not trusted by firm owners with any decision-making power and as a result, these firms do not expand beyond the size that could be managed by close male family members. In fact, the number of male family members had more than three times the explanatory power for firm size than their management practices.

The authors found that while only one-fifth of plants use three-quarters or more of the performance-oriented management techniques that the survey covers, these plants had dramatically better performance than plants that adopted less structured practices. To start, Figure 2 provides a non-parametric view into management practices and six performance metrics. The figure shows a positive and broadly monotonic relationship between structured management and productivity, profitability, growth, exporting, research and development (R&D), and patenting. 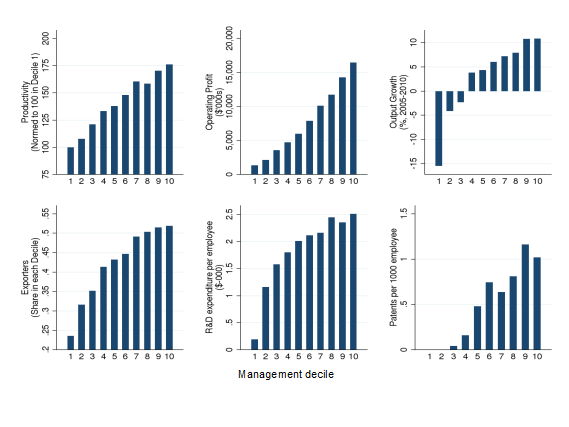 To help understand why structured management is so important and why there are wide differences among plants, the authors identified four causal ‘drivers’ that seem to influence corporate style and substance: product and market competition, state business environments, learning spillovers, and education.

These drivers account for about a third of the total variation in management practices. These drivers are likely important in other countries and contexts as well, especially developing countries where worker skills and education remain low and unionisation remains high.