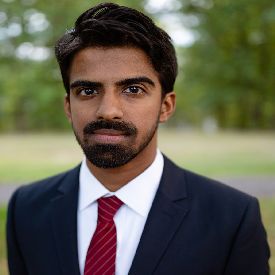 What were the effects of the 2016 Indian demonetisation that removed 86% of currency in circulation overnight, on the production side of the economy? By combining data from financial statements and surveys of firms and workers, this article finds that firms that use cash more and obtain larger shares of labour or material inputs from the informal sector, experienced declines in these input shares after demonetisation. Further, casual labourers were more likely to report being unemployed post demonetisation.

Despite advances in payment technologies, paper currency continues to be widely used in developed and developing countries alike. Not just households, but even businesses may hold cash to pay for inputs like labour and materials. This is reminiscent of countries with a large informal sector1. Formal enterprises depend on the informal sector for agricultural inputs and informal labour that are typically paid for in cash, mainly because suppliers of these inputs do not use or even have bank accounts. In such environments, cash plays an important role in overcoming the transactional friction.

On 8 November 2016, Prime Minister Narendra Modi made a surprise announcement on national television stating that the two highest denomination currency notes of Rs. 1,000 and Rs. 500 would no longer be legal tender from the next morning onwards. The government’s stated policy objectives of fighting corruption and rooting out black money warranted the surprise nature of the announcement. Additionally, to maintain secrecy, the new notes were not printed ahead of time. The printing and distributing constraints slowed down the process of introducing the new Rs. 500 and Rs. 2,000 currency notes into the economy. 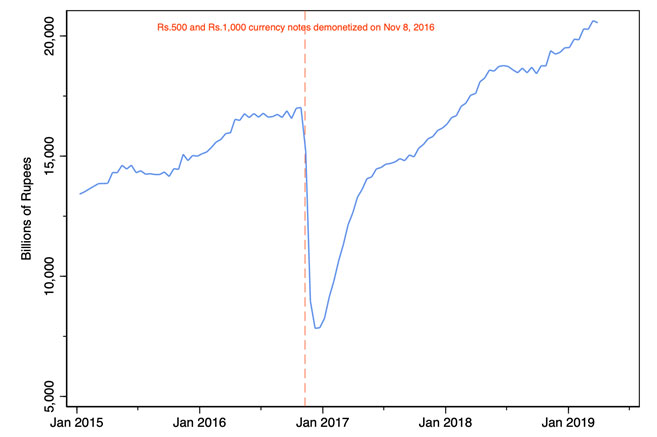 Note: Dashed line indicates the date of the announcement of demonetisation.

Estimating the supply-side effects of demonetisation

In recent research (Subramaniam 2020), I exploit cross-sectional variation (across observations in the same time period) in firm and industry characteristics that correlate with cash usage and exposure to the informal sector, to unpack the supply-side consequences of demonetisation on the economy. I study the near-term supply-side effects by merging firm financial statements with industry-level measures of cash usage, as well as industry- and firm-level measures of dependence on informally sourced labour and materials, respectively.3 These measures come from national surveys of firms, workers, and informal enterprises, administered before the demonetisation episode. Firms with varying degrees of exposure to informality were affected differentially by demonetisation. This cross-sectional variation helps unpack the causal effect of the shock on firm-level inputs by naturally producing firms that were treated with different intensity.4

India is characterised by a large informal sector and the formal sector is highly dependent on it for inputs. A vast majority of India’s labour comprises informal workers. Figure 2 plots the share of casual (or informal) labour employed in the total workforce against labour intensity, as measured by the labour share in value-added for industries as classified in the KLEMS (capital, labour, energy, materials, and service) India Database, 2015-16. In general, more labour-intensive industries tend to tap into the informal labour market as it is cheaper to hire and fire these workers. Formal firms are also heavily reliant on the informal sector for inputs, such as agricultural inputs, that are typically paid for in cash, and were hence relatively more hurt following demonetisation.

Firms witnessed declines in labour and materials after demonetisation

Demonetisation is primarily viewed as a demand shock (or a liquidity shock). However, cash is also used by firms to purchase inputs that go into production. For example, agricultural labour is traditionally paid in cash; firms and contractors may need to pay informal workers in cash; and suppliers of informal materials such as agricultural inputs are compensated in cash as they do not have or use bank accounts. To that end, demonetisation can be thought of as an aggregate supply shock.

Figure 2. Labour intensity and use of casual labour, by industry 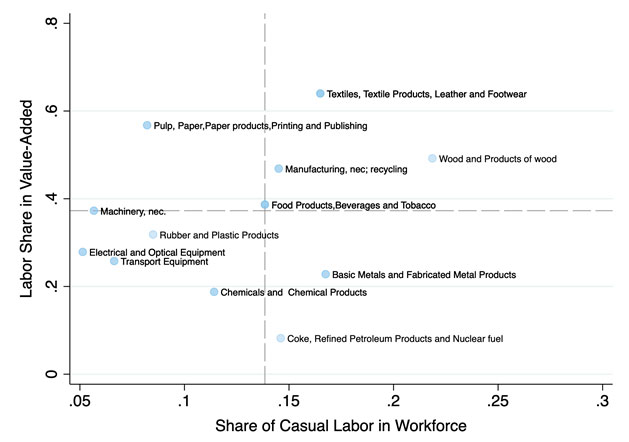 Why do we not see the effects of demonetisation in aggregate GDP data?

When we look at aggregate GDP (gross domestic product) data, we do not observe the full impact of demonetisation for two reasons.  First, GDP is not measured, but estimated, for the informal sector using surveys that are carried out every few years. Hence, GDP may potentially overestimate economic activity. Second, due to the nature of the shock, a large shift from cash-based transactions to electronic payments could cause a moderate rise in formal-sector GDP, further creating additional measurement issues. These two reasons make it difficult to identify the causal effects of demonetisation using aggregates. If anything, official GDP data shows a slight uptick during that period, whereas in the months after the initial announcement there were news reports and anecdotal evidence of worker layoffs and job losses in the informal sector. These are at odds with one another.

Taken together, the results from this paper document significant supply-side effects of demonetisation in the near term. These results are an underestimate of the true effects because high-frequency data is available only for the formal sector. Needless to say, the informal sector bore the brunt of the shock. While other economists have focused on the cross-section of districts in India to unpack the effects of demonetisation (Chodorow-Reich et al. 2020), and have found a two-percentage point contraction in employment and output, my results speak to these aggregate findings using the cross-section of firms and industries. While the predominant channel in the aforementioned study is demand, my findings suggest a supply channel to have been operative as well.

Finally, my research focuses only on the near-term impacts of demonetisation. While there may be long-term benefits from moving away from cash, using digital payments, and improvements in tax compliance, it is less clear if these benefits justify the costs, especially given that our current estimates of the costs of demonetisation are a lower bound of the true effects.