Given the lack of reliable wage or asset data, tax returns-based World Top Incomes Database is important for measuring income and wealth inequalities. Analysing the India series of the database, this column that starting in the 1980s average incomes grew faster than ever before, but that most of the gains went to the . The trends mirror massive shifts in Indian political economy during that period.

Thomas Piketty’s bestseller ´Capital in the Century’ has given a much-needed boost to the discussion on economic inequality in the long-run as well as during the neoliberal period. In India too, in the past decade, there have been a series of studies on various dimensions of inequality (Banerjee and Piketty 2005, Cain et al. 2010, Jayadev et al. 2007, Motiram and Vakulabharnam 2011, Pal and Ghosh 2007, Sen and Himanshu 2004, Vakulabharnam 2010). While consumption inequality is relatively easy to estimate based on household expenditure data, income and wealth inequalities are harder to measure particularly for developing countries where reliable wage or assets data is rarely available. The lack of data is even more pronounced for those at the top of the income or wealth distribution. Here the World Top Incomes Database (WTID) of 29 countries constructed by Piketty and colleagues using mainly income tax returns data becomes important (Alvaredo et al. 2014). While tax-based data suffer from several limitations for an economy like India’s which has a preponderance of informal (and hence officially untaxed) economic activity, tax evasion, and a narrow direct tax base, the WTID is an important complement to the National Sample Survey (NSS) data that typically underestimates inequality). WTID clearly illustrates the massive shift in Indian political economy in the 1980s, as seen through the lens of income inequality at the top of the distribution.

The WTID has been used to study the dynamics of inequality in several different countries (Atkinson et al. 2010). The series for India has been constructed by Abhijit Banerjee and Thomas Piketty using tax returns published in the ‘All-India Income-Tax Statistics’ (AIITS) series for the years 1922 to 1998 (and extrapolated to 1999).1 Banerjee and Piketty (2005) present income shares of the top 1%, 0.5%, 0.1% and 0.01% of the income distribution in India from 1922 to 1999, and compare the trends to those found in the US, UK and France. In this column, I extend their analysis by looking at trends in relative as well as absolute and calculating decadal growth rates in top incomes.2  I also place these trends in the context of India’s political economy Basole (2014).

Income inequality in India in the 20th century

The share in national income of the top 1%, 0.1%, and 0.01% peaked in the 1930s and then steadily declined following the Second World War and decolonisation (Figure 1, left). Throughout the planning period, inequality decreased continuously. The share of the top 1% fell to its lowest point (4.4%) in 1981 before starting to rise in the 1980s and accelerating in the 1990s. Note that the increase in inequality starts 10 years before the 1991 economic reforms. Banerjee and Piketty (2005) attribute this reversal to the pro-business policies brought in by the Indira Gandhi and Rajiv Gandhi governments of that period. This view is consistent with other recent scholarship that has put forward the view that the neoliberal period in India starts in the mid-1980s, several years before the 1991 reforms (Kohli 2012, Rodrik and Subramanian 2004). I discuss this further in the next section.

A second point that emerges from Figure 1 (right panel) is that there has been a divergence within the top 1%, with the very top (0.01%) pulling away from the rest of the 1%. Consistent with the behaviour of the income distribution in other countries (Atkinson et al. 2010), inequality increases sharply at the top of the distribution. The 1% average ratio in 1999 was 9:1, but the 0.1% to average ratio was 36:1 and the 0.01% to average ratio 157:1. Strikingly, the 0.01% to average ratio, which had reached a historic high of 300:1 in the colonial period decreased significantly to 45:1 by 1979 before climbing back to 200:1 in 1995. Thus, a mere 15 years of a changed political economy were enough to restore a substantial portion of the inequality of the pre-independence period.

The measures presented in Figure 1 show that inequality was on the rise throughout the 1980s and 1990s, though not reaching colonial levels. However, these relative inequality measures only give us part of the picture. Subramanian and Jayaraj (2013) and Ravallion (2014) have recently argued in favour of measuring absolute inequality in addition to relative inequality.3  A simple measure of absolute inequality is the real rupee difference (as opposed to the ratio) between the average income and the income of the top 1, 0.1, and 0.01%. To appreciate the difference between relative and absolute measures, note that if two incomes of say Rs. 1,000 and Rs. 10,000 increase, in real terms, to Rs. 2,000 and Rs. 20,000 respectively, the relative inequality, as measured by shares/ratios or the Gini coefficient,4 is unchanged but the absolute inequality has doubled from Rs. 9,000 to Rs. 18,000. This is clearly an important change in this hypothetical economy.

Figure 2 shows real incomes for all three categories over the data period. For reference purposes, the national average is reproduced at the top left. The subsequent charts add the real annual incomes of the rich (top 1%, top right), the super-rich (top 0.1%, bottom left), and the ultra-rich (top 0.01%, bottom right). Note that, even though the average income rises in real terms throughout, real incomes actually fell for the rich, very rich, and super rich during the 1960s and 1970s. Thus for the average to rise during this period, incomes in the middle and at the bottom have to have increased to compensate for this decline at the top. This indicates that economic growth though was certainly more pro-poor during the planning period than afterwards.

As can be surmised from the data presented above, the planning period was not a good era for the growth of top incomes in the Indian economy. In particular, the 1960s and 1970s were decades during which average income grew at a decadal growth rate of around 10-12%, but incomes of the rich, very rich, and super rich fell sharply (Figure 4). The decadal growth rates for the three were -56%, -68%, and -79% respectively. But the situation had dramatically reversed itself by the end of the 1980s. The same growth rates in the very next decade were 54%, 55%, and 49%. In comparison, the national average grew by 23% in the 1980s as opposed to 12% in the 1970s. Another strong decade of top income growth in the 1990s more than restored the real incomes of the rich that had taken a hit in the turbulent 1970s. 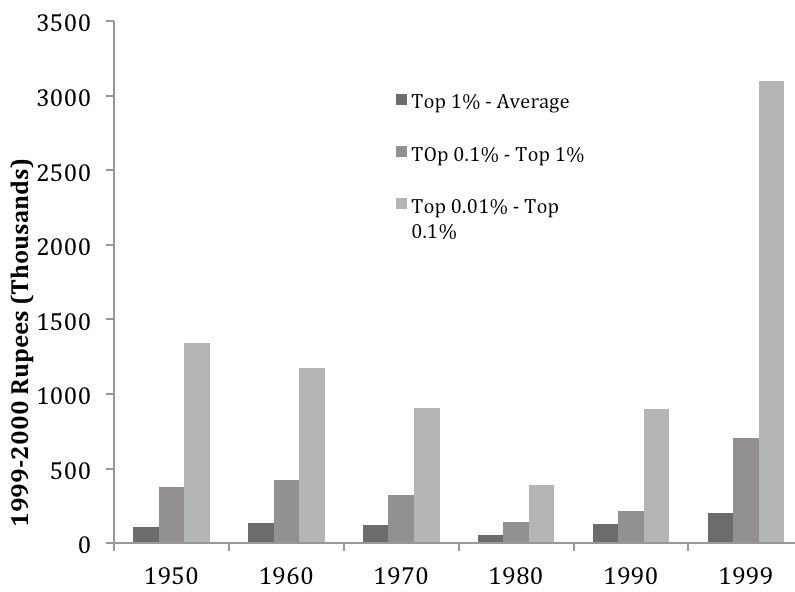 The structural transformation that the Indian economy underwent in the 1980s is clearly reflected in the data presented here. A particularly striking aspect of the data is the sharp decline in real income at the top in the 1960s and 1970s. The prolonged industrial stagnation of this period (Raj 1976, Nayyar 1978) likely contributed to this. But several years before the economic reforms of 1991, incomes had recovered substantially. Allowing for artifacts such as improved ability of the State to tax incomes and increased incentives to pay tax due to reduced rates (which would also result in a rise in top incomes in the data), Banerjee and Piketty (2005) suggest that changing social norms, booming economy, international trade and globalisation can explain the rise. Indeed, the WTID data fits very well with the emerging view that a pro-business policy climate was the hallmark of the post-Emergency Indira Gandhi government as well as the Rajiv Gandhi government and that Indian political economy had shifted unmistakably from the Nehruvian Statist model to a pro-big business regime several years before the reforms of 1991 (Frankel 2005, Kohli 2012, Rodrik and Subramanian 2004). The result was a reversal of the industrial stagnation and industrial growth rate increased from 3.8% in the period 1965-1979 to 6.5% during 1980-1990 (Kohli 2012). As the emphasis shifted from redistributive justice to increasing productivity as well as private investment via relaxing of licensing requirements, taming labour, and host of other by-now familiar neoliberal policies, faster growth was indeed achieved, but the gains went disproportionately to the top.

The WTID data clearly reveals the nature of growth experienced by the Indian economy since the 1980s. While average incomes grew faster than they ever did before, most of the gains went to the very top and inequality exploded. In absolute terms, inequality at the end of the 1990s was far higher than it had been even in the colonial period. India’s new political economy, taking shape since the 1980s, has failed to deliver inclusive growth.