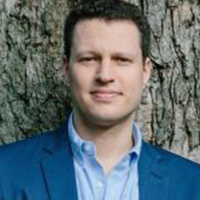 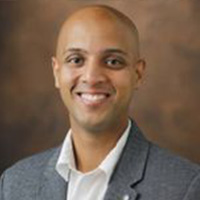 The second part of the two-part column on slum leaders discusses who these leaders are - their age, professions, and relationships with political parties - and how they build support within their communities.

This is the second of a two-part series of articles regarding India’s informal slum leaders. In the first part , we discussed how some slum residents rise to become leaders of their settlement, and the range of activities they are involved in. In this part, we draw on our second survey, conducted in the summer of 2016, of a sample of 629 actual slum leaders across those same settlements. Finding slum leaders, let alone a systematic and large sample of them, is extremely challenging, and to our knowledge has not been previously attempted in India. Indeed, this survey represents one of the few surveys of local political intermediaries in low-income democracies. We draw on this leader survey to outline the social and economic profile of slum leaders in Jaipur and Bhopal, and what we learned from talking to them about how they build and maintain support within their communities.

Who are India’s slum leaders?

We find that India’s slum leaders are predominantly older, relatively well-educated males. About 88% of the slum leaders in our sample were men. Their average age was 47.75 years with a standard deviation1 of 11.79 years. The youngest slum leader in our sample was 22 years old. The oldest was 90. The average level of education was 8.37 years. This exceeds the average education of ordinary residents by three years. Ninety per cent of the sampled leaders were literate, compared to 61.85% of sampled residents. These results lend support to our experimental findings that residents prefer more educated slum leaders.

How do the occupational profiles of slum leaders differ from those of everyday residents? Forty five per cent of sampled residents engaged in unskilled labour, transportation jobs, and vocational work. This is roughly twice the percentage of slum leaders who worked in these same occupations. The second most common job was homemaker (25%), predominantly held by women in the sample. Eleven per cent of sampled residents had small businesses of the variety discussed above. Students made up another 5%, with the remaining categories all falling below 3% of the sample — security guards, educators, artisans, and professional jobs. India’s slum leaders, therefore, are more likely than everyday residents to be small business owners, government workers, and professionals, and less likely to toil as unskilled labourers in India’s informal economy. These findings square with residents’ preferences for leaders. 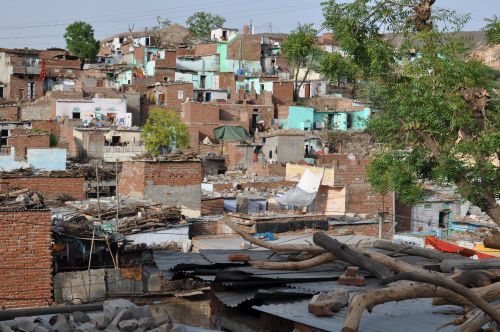 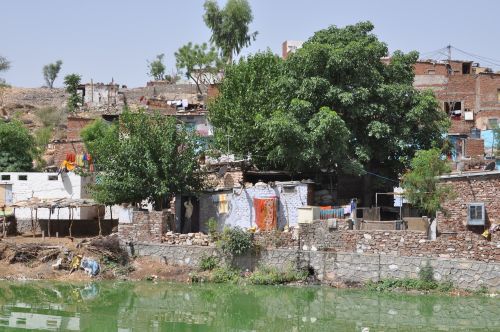 India’s slum leaders are remarkably diverse. One hundred and sixty castes (jati) populate our sample of slum leaders, representing all strata of the Hindu caste hierarchy and a large number of Scheduled Tribes and Muslim zat. Close to 71% were Hindu, while the remainder were mostly Muslim (27%), with a small percentage of Sikhs, Christians, and Buddhists (2%). Most were from Rajasthan (58.19%) and Madhya Pradesh (26.71%), the two study states. Others migrated from Bihar, Chhattisgarh, Delhi, Gujarat, Haryana, Maharashtra, Tamil Nadu, and Uttar Pradesh.

The vast majority of slum leaders in our sample had an expressed connection to a party. Of the 544 (86.49%) sampled leaders with a party affiliation, 215 supported the Indian National Congress (INC) and 321 supported the Bharatiya Janata Party (BJP). Four hundred and fifteen leaders (76.29%) were padadhikari, or position holders within a party organisation. Given the importance of vertical ties for securing public services, as well as the material rewards associated with brokerage activities, the prevalence of partisan ties among slum leaders is not surprising.

How slum leaders do (and do not) build coalitions

Our survey data challenge several conventional assumptions regarding Indian politics. First, while leaders openly acknowledge distributing gifts and cash at election time, very few think it does any good. In fact, leaders think that on average only 10% of residents have their votes affected by such gifts. Instead, leaders believe the goodwill earned by everyday activities they perform between elections is crucial to their success. Second, leaders do not simply favour members of their own ethnicity. The vast majority of our slums house residents from dozens of jatis, multiple faiths, states, and linguistic communities. Because of the diversity of settlements, leaders must build multi-caste coalitions of support. We asked leaders to name the ethnicities of the last five residents who sought help from them: 77% named residents from multiple jatis. For leaders, focussing on building a client network exclusively of members of their own caste community is simply not a politically effective strategy in India’s diverse slums.

Third, our survey also demonstrates that slum leaders must continuously work to keep resident affections. India’s slum residents are not simply under the thumb of a single slum leader or party boss, and constantly re-evaluate their leadership options in densely competitive slums. Like more privileged voters, slum residents frequently switch their support if they feel a different leader or party is more likely to bring benefits to the settlement. Ninety five per cent (2,078 out of 2,199 respondents) of residents stated that they vote in elections. Of those 2,078 respondents, one-third claimed to have voted for different parties across the last several elections. Finally, voting behaviour in these spaces often diverges from commonly held assumptions regarding party-voter linkages in India. For instance, of the 542 Muslim respondents in our resident survey, 112 (21%) supported the BJP, India’s Hindu nationalist party. And of the 169 Muslim slum leaders in our sample, a similar 27% (46 respondents) supported the BJP. Thirty four of those Muslim BJP supporters had formal positions (pads) within the party. It bears remembering that we cannot claim any of these insights are nationwide patterns, as we have data from only two cities. Still, we believe they offer important, if incomplete insights, regarding the evolving political ecosystems of Indian slums.

Understanding the origins, emergence, and activities of India’s slum leaders is also crucial for community-driven development programmes. Harnessing - or inducing - local participation has become a central hallmark of contemporary international development policies (see Mansuri and Rao 2013). In line with these trends, India’s urban development programmes, since the early 2000s, have increasingly emphasised local citizen participation. Rajiv Awas Yojana2, for instance, created an entire handbook for state and local governments on how to form and delegate responsibilities to community-based organisations in slums. Our fieldwork and survey research highlights the bottom up forms of informal leadership and political organisation that emerge in slums. These are the actors and networks that development practitioners confront on the ground, and thus require careful consideration in both the design and implementation of community development interventions.

This article first appeared in India in Transition, a publication of the Center for the Advanced Study of India (CASI), University of Pennsylvania. All viewpoints, positions, and conclusions expressed in IiT are solely those of the author(s) and not specifically those of CASI. The links to original articles are here: