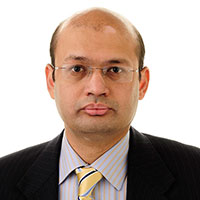 In response to RBI’s call to accelerate the recognition of stressed assets, publicly traded banks in India added nearly Rs. 1 trillion in bad loans in the quarter ending December 2015. In this article, Ashish Pandey, a finance professional, proposes a multipronged approach to addressing the Non-Performing Assets crisis in the Indian banking system.

Public Sector Banks (PSBs) in India have once again delivered quarterly financial results that will hardly cheer anybody. A deep-dive analysis of statistical data released by the Reserve Bank of India (RBI) in December 2015 shows that India is currently staring at a crisis of an unprecedented magnitude: Non-Performing Assets (NPAs)1 in the banking system stood at 5.1% of total outstanding loans and advances, as of 30 September 2015. In addition, approximately 6.2% of total outstanding loans and advances belong to the standard restructured2 category. It is a well-known fact in the Indian banking circles that a significant percentage of restructured assets will eventually become doubtful assets since the financial viability of restructuring wasn’t rigorously validated. Banks wanted their year-end balance sheets to appear healthier than they really were, and unsound restructuring efforts were merely an attempt at pushing the can down the road.

Stressed assets - a combination of NPAs and restructured assets - still do not tell the full story. There is another hidden pocket of NPAs on bank balance sheets that often goes unnoticed. When banks sell NPAs to Asset Reconstruction Companies (ARCs), they typically retain 85-95% of exposure to eventual loan recovery in the form of security receipts3. Banks had sold assets with a book value of Rs. 1.9 trillion by 2015 and considering the abysmal recovery ratio of ARCs till date, it is more than likely that a significant percentage of the face value of security receipts will be eventually written off.

RBI Governor Raghuram Rajan has been at the forefront of tackling this crisis that he inherited but, unfortunately, is bogged down by the exceptional scale of the problem. PSBs, where the Indian government is the majority shareholder, are worst hit by the crisis. Their share of non-performing and restructured loans as a percentage of total advances is more than double that of private sector banks. Concentration risk for PSBs is at an all-time high level: Share of NPAs of large borrowers to the total gross NPAs increased to 87.4% in September 2015 from 78.2% in March 2015. Stressed assets as a percentage of total net worth exceed 100% for many banks rendering them insolvent by fiduciary standards though not by accounting standards.

India needs to tackle the NPA problem aggressively rather than pussyfooting as it has been doing over the last two years. The magnitude of the crisis is already significant and any delay will only lead to a worsening of the situation. There are four options available to the Indian government and RBI. It is unlikely that any one of them in isolation will be enough to prevent the crisis but a determined multipronged approach may well work. 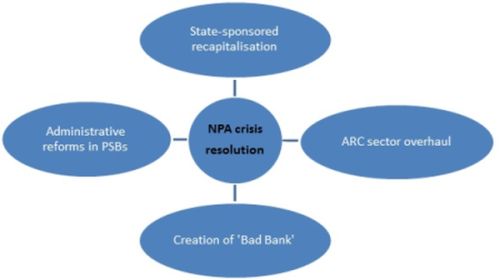 Recapitalisation of Public Sector Banks by the government

The first initiative necessary to tackle the NPA problem is a recapitalisation of PSBs by the government so that they can start lending in a prudent fashion. New loans, when underwritten properly, will reduce the magnitude of the problem by sheer denominator effect. Most of the PSBs are trading below their theoretical book value and, considering the opacity of their balance sheets, there is a limited demand in secondary markets to participate in a follow-up subscription. The price discovery mechanism for a forced secondary offering of shares of PSBs is likely to be vicious and subsequent dilution of the government’s holding5 may not be palatable from financial and public perception perspective. The government’s announced plan of Rs. 700 billion investment in PSBs over the next four years falls way short of the requirement. Fitch estimates that scheduled commercial banks need Rs. 9 trillion of capital infusion over the next four years to comply with Basel III requirements6. This is a huge amount for a cash constrained government, and the Rs. 700 billion earmarked by the government are insignificant in this context. While trying to arrive at a ratio of NPAs to total advances of less than 5%, I estimate that the government needs to infuse at least Rs. 2.5 trillion of capital over the next two years. This figure may reduce further to Rs. 1.6 trillion with the softening in future bond yields once RBI’s monetary policy transmission effort achieves success. A reduction in bond yield will result in mark-to-market gain7 on bonds held in balance sheet of PSBs towards the statutory liquidity ratio (SLR) requirement8. This will bring credibility back into the banking system and remove the impediment in immediate growth of the credit book. A larger, diversified and better quality credit book will improve the profitability of banks, increase equity valuation and position them to tap capital markets rather than relying on government support. An investment by the government in PSBs is actually the most logical initiative as in the absence of this the notional value of government’s shareholding will only decline further - whereas investment will lead to a higher valuation at a future date. Capital infusion by the government in PSBs will not be a desperate gambler’s ‘double-down’ decision but a well thought out strategic investment.

The second initiative necessary to tackle the NPA problem is a complete overhaul of the ARC sector in India. This will involve changing the sale mechanism for NPAs currently adopted by banks, liberalising the FDI (foreign direct investment) regime for the ARC sector, and streamlining the process of legal recovery from loan defaulters. At present, banks sell their assets to the highest price bidder irrespective of their past recovery performance or operational wherewithal to effective manage the distressed assets. Prior to August 2014, ARCs were required to invest only 5% of the sale price of assets while they were paid close to 1.5% annually as a management fee. Since it takes a long time to resolve distressed assets (often more than five years), ARCs were able to recoup their entire investment even in a zero-recovery scenario and had no ‘skin in the game’. Since August 2014, the 5% requirement has been enhanced to 15% but the ‘equal footing’ nature of ARC investment still leads to a perverse incentive. Banks need to adopt a mechanism where ARCs recoup their investment only after banks have received the face value of security receipt. ARCs can be incentivised by offering them a disproportionate share of recoveries in excess of face value. This mechanism will weed out non-efficient players and will incentivise players that make serious recovery efforts and are technically proficient in managing distressed assets. In addition, the investment restrictions in ARCs need to be removed, as contemplated in the Union Budget 2015-16. The current capitalisation of 15 ARCs is approximately Rs. 30 billion. Given the 15% capital requirement, they cannot buy new assets in excess of Rs. 200 billion over a period of time. Rs. 200 billion of investment capital is a pittance considering Rs. 5.5 trillion of distressed assets. Past guidelines imposed a restriction on maximum equity that a foreign player can own in an ARC. Large global buyers of distressed assets and special situations asset management firms have therefore shied away from entering the Indian market. The government needs to allow unfettered entry of foreign capital in the ARC sector to bring required capital and expertise in managing distressed assets. Though enactment of Securitisation and Reconstruction of Financial Assets and Enforcement of Security Interest Act, 2002 (the “Sarfaesi Act”) was a noble attempt to resolve legal bottlenecks and expedite the recovery process, there are still some lacunas and procedural bottlenecks that impede the process. Amendments necessary to streamline the process would be a welcome step and should act as confidence building measure for infusion of fresh capital in ARCs.

Creation of a ‘Bad Bank’ by the government

The third initiative necessary to tackle the NPA problem is the creation of a ‘Bad Bank’ by the government, which will act as super ARC. Flow of capital flow to the ARC sector will only happen over a period of time and existing ARCs have very limited financial ability to participate in the government’s clean-up exercise. Further, there will always be certain assets where a difference in perception of value exists between buyer and seller. The existence of a State-owned entity tasked exclusively with tackling NPAs on a one-time basis will expedite the clean-up of the banking system without sacrificing the intrinsic recovery value of transferred assets. Further, a State-owned ‘Bad Bank’ would reduce the perception of, and possibly tendencies for, corruption involved in large-scale transfer of assets. In the early 90s, this approach was used very effectively by Sweden. In the United States and in Spain, Bad Bank creation helped in expediting asset sales and in containing the impact of NPA crisis on other macroeconomic indicators. Given a large amount of NPAs and snail-paced sales of NPAs by PSBs in India till date, a State-sponsored Bad Bank is a critical cog in any integrated solution to the current problem.

None of the above initiatives will lead to long-term success until systemic and administrative reforms are implemented in PSBs. Hence, the fourth initiative necessary for dealing with this crisis is a complete overhaul of risk management systems, performance appraisal systems, and board appointment processes in PSBs. Otherwise the problem will recur at a later date. Towards this end, the RBI needs to propose, implement and rigorously monitor guidelines that promote prudent lending and reduce concentration risk significantly from the current levels. The RBI needs to advise banks on adopting sector-specific caps for lending, apply single name exposure limits that limit the amount of loan that can be extended to a borrower, develop policies that ensure transparent and fair assessment of collateral value, and implement constant risk monitoring mechanisms that incorporate Value at Risk (“VAR”) as a primary metric. Banks need to invest in human and technical resources necessary to comply with these RBI guidelines. Data from the research of Berger and DeYoung on banking crises often favours the bad management hypothesis over the skimping hypothesis9. Decreases in measured cost efficiency are generally followed by increases in NPAs - evidence that bad management practices are manifested not only in excess expenditures but also in subpar underwriting and monitoring practices, which eventually lead to non-performing loans. Ineffective supervision and managerial deterioration are major contributors in the Indian banking crisis. Board of Directors and CEOs of individual Banks need to implement safeguards for timely detection of worsening asset quality even if such safeguards increase operating expenses in the interim. In addition, banks need to implement performance appraisal systems that incorporate long-term asset performance as a critical metric in evaluating bank employees for their career advancement. They also need to adopt a communication policy that develops a culture of prudent lending and promotes openness in communication across levels. Lastly, the government needs to appoint more professionals on the boards of PSBs rather than State appointees. Skills should be a determining factor and not political patronage, as has been the case so far. Tighter accountability and adequate incentive mechanisms need to be put in place for bank employees that will stimulate profitable lending in the future.

A version of this article has appeared in the Journal of Politics and Governance.