A success story from Keonjhar 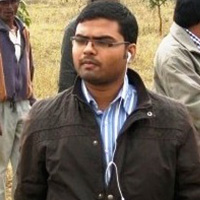 The final narrative in our three part series on what development means to real women comes from Keonjhar in Odisha. In spite of facing deprivation and setbacks early in life, today Basanti Naik successfully oversees the implementation of MNREGA projects in her village. Her life gives a very positive feedback about the success of government run programmes, but there are still thousands of women waiting to create their success stories. 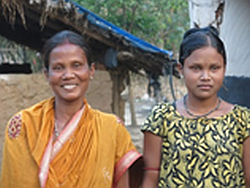 Basanti Naik came to Asanamani village in the Keonjhar District of Odisha 20 years ago, when she married Bidyadhar Naik at the age of 16. Despite being the third daughter of a farmer, she had completed her high school education. By virtue of her education, today this 36 year old mother of three children is a successful Gram snajojak1 and has overseen the implementation of three projects under the Mahatma Gandhi National Rural Employment Guarantee Scheme (MNREGA) in her village.

A day in the life of a Gram Snajojak

Her daily routine is not very different from that of any other working woman, except that Basanti lives in one of the most remote districts in India. She gets up early in the morning, finishes her household chores of cooking food, sending children to school, cleaning etc., and walks towards the worksite in her village with the muster roll ready at hand. In addition to being a farmer, her husband is also a male health worker. We sat on the veranda of her house as she reminisced on the past. The struggle for existence has made her so strong that even the bleak picture of her past did not fill her eyes, although her voice was filled with pain. She recalls that when she got married her husband was jobless and farming was their only source of livelihood. Many a times they went to bed on an empty stomach. The entire village led a similar life of deprivation. There was neither a road nor proper drinking water in the village.

Improvements in health and education

A decade ago there was no immediate health care facility in the village or in the entire panchayat. People would travel 20 kilometers to access basic health care. Malaria and diarrhoea were common and caused many deaths. Things are now changing for the better as a number of government schemes have been implemented at the grass root level. Basanti is very appreciative of initiatives such as the Janani Express which has made institutional deliveries much more common. With the presence of Anganwadi workers, Accredited Social Health Activists (ASHA) and Auxiliary Nurse Midwives (ANM), basic medical facilities have reached the doorstep of villagers. Villagers are becoming more conscious of their health and entitlement. The distribution of long-lasting insecticide-treated bed nets (LLIN) has also been a highly effective way to protect families from malaria-infected mosquitoes. Another important development for the village has been the emergence of a market place in nearby Pipilia which includes a medicine shop. Basanti believes in the importance of education, and overcame many impediments in her life to complete high school. She is happy that secondary education has become more accessible to her children due to the presence of a school near her village. Although she is happy with the changes in the education sector in the village, she is equally concerned about the deterioration of the quality of education. She blames both the teachers as well as students. She is worried about the blatant misuse of mobile phones among young children which she thinks is a distraction. But she also accepts the fact that due to the ready availability of information, kids are becoming more aware. While she may not have a lot of information on the various options after secondary education, she dreams that her children will be able to graduate from college. 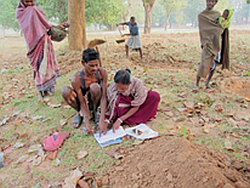 Availability of employment: The game changer

Basanti states that the biggest game changer has been the availability of work near the village. Earlier there was no source of revenue other than farm activities, and people were generally idle in the non-productive seasons. The advent of schemes like MNREGA, Total Sanitation Campaign, Swarnajayanti Gram Swarozgar Yojana (SGSY) and Pradhan Mantri Gram Sadak Yojana (PMGSY) has greatly increased the amount of work available in the village. Interventions by NGOs have also opened up some job opportunities.

Basanti works as a Gram Snajojak in MNREGA projects. Although there have been issues such as delayed payments, she believes that this work can actually improve the quality of her life. When asked whether MNREGA has helped her, she nodded her head and showed me a saree that cost Rs. 300 ($ 5 approx.) This is a significant change in status as she has never bought a saree that cost more than Rs. 100 ($1.6 approx.) before. The thatched house belonging to her family is now covered with tubular tiles, and brick walls have taken the place of mud ones due to extra income that has flown in. In her words, “The availability of 100 days of work and the option to create assets in the village is a great boost to rural life. When one develops their own land and gets paid for it – it can’t get any better than that.”

Basanti now earns Rs. 876 ($15 approx.) per week from MNREGA. The Public Distribution System (PDS) has taken care of food security to a great extent and this gives her the liberty to think about other aspects of life. Vegetables and cereals have become a regular item in the menu of the family, which was earlier restricted to water, rice and potato or pickles. The children get new clothes on festivals and have their own books and cycles.

The availability of work and consequent hike in income have changed Basanti’s social status. She now commands respect in the village and controls household decisions. She takes part in village planning and Gram sabhas. The Sarpanch and Gram Rojgar Sevak (GRS)2 resolve her work related issues in a timely fashion.

She has a mobile that she uses to contact the block officials. Although the block staff was callous in the beginning, their attitude towards her has now changed. The junior engineer comes to the work site for measurement, when contacted, which has reduced payment delays in the village. She is extremely happy about the introduction of direct fund transfers of MNREGA money to the card holder’s account. This has eradicated the cheque payment system which was a major reason for delayed payments. She feels that the availability of the banking system has helped people in many ways. People no longer have to walk long distances to withdraw money, only to return empty handed due to long lines.

Inspired by her, many women who were earlier reluctant to come to work are now taking part in MNREGA works. Some women work just for a week or two to get some cash for a specific purpose. This is a positive, according to Basanti, and should be looked at as an indicator of how the women have started planning for things beyond just the basic minimum needs of a household.

Basanti devi is also a member of the Vishwa Matarini Self Help Group (SHG). The group has accumulated more than Rs. 20,000 savings. Participation in the group has increased the confidence of the members as they are assured of getting help in their time of need. The SHG is also planning to make bricks and supply them to Indira Awaas Yojana beneficiaries. The women are confident of making a profit out of this activity. They are planning to get the group graded through the state National Rural Livelihood Mission (NRLM) team and get access to credit, which will open up more avenues for them.

Basanti is adamant that her daughter will not marry until she learns to take care of herself. She believes that both her sons will complete college and get decent jobs. She wants more and more people to undertake 100 days of work under MNREGA so that they can avail more benefits. She believes that once they finish the rain water management project, the productivity of the fields will increase as the land will be able to retain more water and the groundwater will get recharged. She is confident that the overall situation is going to improve in the near future. She has faith in the system. Although the village is yet to be electrified, she believes their future is going to get brighter with each passing day. Her vision and commitment for better implementation of schemes at the grass root level is commendable.

Although this story gives positive feedback about the success of government run programmes, there are still thousands of women waiting to create their success stories. While there are various well-crafted schemes but - as it is said - a policy is only as good as its implementation.