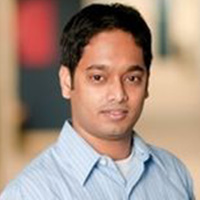 The decline in labour’s share of national income in recent decades – a potential cause of rising inequality – has coincided with an increase in world trade. This column analyses the impact of trade reforms in India on labour’s share of total revenue at the firm level. It finds that the share of labour has been rising with reforms for small, labour-intensive firms.

In recent years the perceived stability of labour’s share in national income has been challenged. For example, International Labour Organization (ILO) (2011) shows that, since the early 1990’s, the labour share of national income has declined in roughly three-quarters of the 69 countries that they studied. This decline has been especially pronounced in developing countries. This is strongly supported by the recent work of Karabarbounis and Neiman (2013) who find that the labour share of corporate value added1 has declined for 38 out of the 56 countries that they studied. This declining labour share of national income is a potential cause of the rising inequality in recent years (Atkinson 2009).

The decline in the labour’s share of national income in recent decades has also coincided with an increase in world trade. This raises the possibility that international trade is one of the causes of this declining labour share. Despite this, the focus of the trade and inequality literature in recent years has been on the rising skilled-unskilled wage gap. By paying scant attention to labour’s declining share of income, this literature provides us with an incomplete picture of the relationship between trade and inequality. We fill this important gap in the literature by examining the impact of India’s 1991 trade reforms on labour’s share of firm revenue among a sample of Indian firms (Ahsan and Mitra 2014). As these reforms were enacted at the urging of the International Monetary Fund (IMF) and came as a surprise to many within the country, it provides us with an external variation in tariffs that allows us to identify the causal effect of trade liberalisation on labour’s share of firm revenue.

A key contribution of our work is that we identify the presence of significant variation across firms in the relationship between trade and labour’s share of firm revenue (Figure 1). 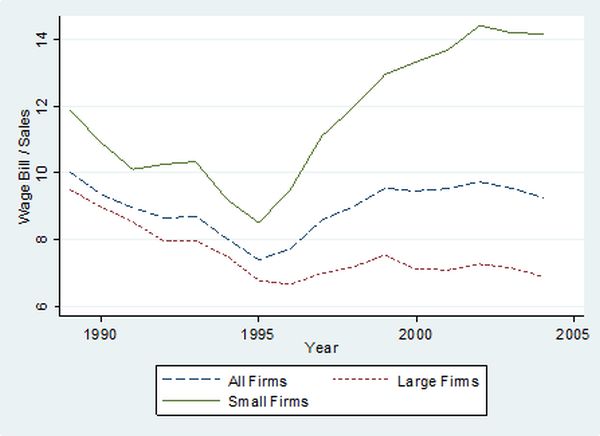 The channels at work: Price-cost mark-ups, labour’s bargaining power and their interactions

To explain this variation in the data, we develop a theoretical model of labour union-firm bargaining with imperfect competition in the goods market4. Workers get paid for the increase in revenue due to an additional worker employed (called the marginal revenue product of labour) as well as a share in the firm’s rents depending on the union’s bargaining power5. Our model suggests that there are two competing effects of trade on labour’s share of firm revenue. First, the increased competition due to trade reforms (because the firm now has to compete with exporters from other countries in addition to domestic firms) lowers the gap between the good’s price and marginal cost and, in turn, the gap between the value of the marginal product of labour and the marginal revenue product of labour6. All else equal, this will lead to an increase in labour’s share of firm revenue. On the other hand, the lower price-marginal cost mark-up due to more liberalised trade also reduces the rents (as a share of firm revenue) that are available for bargaining between the firm and the labour union. All else equal, this second effect will lower labour’s share of firm revenue.

Our model suggests that the first effect (lower mark-ups leading to an increase in labour’s share) is more likely to dominate for a labour-intensive firm. This is because, other things remaining equal, workers in a labour-intensive firm receive a higher fraction of their wages through their marginal revenue product relative to their share in firms’ rents7. On the other hand, for less labour-intensive firms (which are larger), our model predicts that trade liberalisation will lower labour’s share of total revenue. Further, following Rodrik (1997), we assume that trade lowers the bargaining power of workers (by making them more replaceable)8. All else equal, this effect will decrease labour’s share of firm revenue for all firms.

To test our model’s predictions, we use a panel dataset of publicly-traded Indian firms that covers the period 1989-2004. This data is made available by the Centre for Monitoring the Indian Economy (CMIE). Together, the firms in the sample represent 60-70% of output in the organised industrial sector and 75% of all corporate taxes paid in India. Note that informal sector firms, which are much smaller in size, are not covered in this database. Finally, our data on output tariffs (tariffs on imports of products competing with the final output of domestic firms), covering the period 1988-2003, are from the Asian Development Bank (ADB).

Our analysis involves examining whether changes in industry-level tariffs, due to India’s externally imposed trade liberalisation of 1991, had varied effects on firms depending on their labour intensities. We use a couple of alternative measures of labour intensity and control for other plausible channels of action as well as possible reverse causation from labour shares to tariffs, as explained in detail in Ahsan and Mitra (2014).

Our results indicate that trade liberalisation raised labour’s share of revenue for firms that are sufficiently labour intensive (about 34.6% of the firms in our sample). When we use firm size indicators as our proxy for labour intensity, we find that trade liberalisation led to an increase in the share of wages in total revenue for small firms. For such firms, on average, a 1% fall in import tariff leads to a 0.05% increase in wage share in total firm revenue.

The results also suggest that trade liberalisation led to a decrease in the share of wages for large firms. In this case, a 1% fall in import tariff leads to a 0.09% decrease in the wage share. In other words, the wage-share increasing effect of lower mark-ups dominates for small firms while the combined impact through the bargaining power and the mark-up channels leads to a decline in the share of wages in total revenue for large firms.

Lastly, we examine the relationship between trade liberalisation and industry-level estimates of workers’ bargaining power, which is a measure of the fraction of a firm’s rents going to workers. Our results indicate that, on average, industries that experienced greater decreases in output tariffs also experienced greater decreases in the bargaining power of workers. This result clearly shows that for the firms that experienced an increase in labour’s share of firm revenue, it was driven by the impact of the reduced mark-up on the marginal revenue product of labour.

While our results underscore the need for social protection, the negative impact of trade on bargaining power, by reducing effective wage costs as well as hiring and firing costs for employers, could increase employment and reduce unemployment. In addition, by weakening labour unions (that often can make it difficult for employers to pay wages that are non-uniform across workers) this reduction in bargaining power could shift incentives such that greater effort receives bigger rewards. This can be productivity enhancing and can ultimately lead to an increase in wages. Furthermore, a decline in the bargaining power of labour can unleash political-economy forces that can potentially bring about reforms in labour regulations, that make it easier for employers to hire and fire workers and reassign them from one task to another as and when required. There is, by now, a large literature showing that restrictive labour regulations have held back the performance of India’s manufacturing sector. This is especially the case in labour-intensive industries, which has prevented a relatively labour-abundant country such as India from taking advantage of its labour abundance-driven comparative advantage.

Finally, in the context of India’s rapid growth after trade liberalisation, a declining share of an expanding pie may still mean a growth in the absolute size of the slice going to workers. However it is important to reiterate here that in the relatively smaller, labour-intensive firms the share of labour has actually been rising with trade reforms.