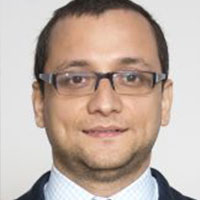 India’s ‘Look East’ policy picked up steam with the conceptualisation of the Indian-ASEAN Free Trade Agreement in 2003. This column analyses the broad trends in India-ASEAN trade over the past delves into the challenges involved in the economic and explores possible options for the way forward.

East and Southeast Asia are important economic blocks in the world trade architecture today and together command more than a third of world trade. Since the beginning of its liberalisation process, India has adopted a ‘Look East’ policy1 which picked up steam with the conceptualisation of the India-ASEAN (Association of Southeast Asian Nations) Free Trade Agreement (FTA) in 20032. The agreement for goods was signed in 2009 and implemented in 2010. The agreement for services and investment was signed in 2014 and news reports indicate it was due to be implemented from July 2015.

Several studies have assessed the possible impact of the India-ASEAN FTA and have reached different conclusions. Pal and Dasgupta (2008) inferred that short-term benefits would accrue mostly to ASEAN countries. Veeramani and Gordhan (2011) concluded that Indian imports of plantation crops like tea, coffee and pepper would increase through channels of trade creation. Sikdar and Nag (2011) concluded that Indian exports and imports would both increase from the bigger trade partners in ASEAN, which are Singapore, Malaysia, Thailand, Indonesia and Vietnam. However, allocative inefficiency might lead to welfare loss in India3. Bhattacharya and Mandal (2014) have found negligible tariff elasticity of trade for most products, that is, tariff changes may lead to only less than proportionate changes in trade for most products.

In this column, I analyse the broad trends in India-ASEAN trade, delve into the challenges involved in the economic relationship, and explores possible options for the way forward.

India-ASEAN trade has grown at an average annual rate of 19% during 2004-2014 with a fall in 2009 due to the global financial and has stagnated . The current trade volume, as observed from Figure 1, is around US$75 billion. The bilateral trade between India and ASEAN was expected to touch US$100 billion by 2015 and, according to a Standard Chartered Bank report, it should touch US$280 billion by 2024-25. The widening trade deficit post-FTA (as seen in Figure 1) is also a concern for India and is a result of import tariff reductions by India; most ASEAN markets had already reduced tariffs before the agreement was signed, due to a more liberalised market access regime. 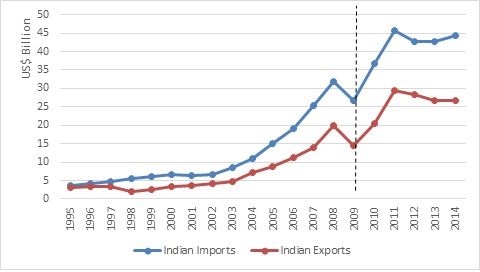 Trade in ASEAN countries has been redefined in terms of trade in value added through global value chains (GVCs) (Economic Research Institute for ASEAN and East Asia (ERIA), 2011). Developing countries like India, which need to kick-start their manufacturing sector, have an opportunity to integrate into the value chain by participating in one particular segment of the value chain of a given industry (Kowalski et al. 2015). In order to strengthen trade and investment relations with ASEAN, India would need to be competitive and participate in the value chain of particular industries.

The “noodle bowl”4 of trade agreements signed by ASEAN in recent years with China, Japan, Korea, Australia and New Zealand strengthen the functioning of the Asian value chain and act to divert trade away from India. Trade Agreements (RTAs) like the Partnership (TPP) has four of the 10 ASEAN member nations namely Singapore, Malaysia, Brunei Darussalam and Vietnam. India is not a part of the TPP and the US-led negotiations are now over. The TPP awaits its implementation in the near future after it is ratified by the governments of member countries.

The Regional Comprehensive Economic Partnership (RCEP) is being negotiated by all the countries in ASEAN. India, Japan, Korea and China are also a part of it. On completion, it would account for 40% of world trade. However, the overlap of membership between TPP and RCEP would affect India-ASEAN trade. First, a successful TPP would set increased quality standards supplied products or parts of products at each stage of the value chain thereby increasing entry costs for countries like India. Second, the TPP may not come around with as ambitious an agenda on intellectual property rights (IPR) as it aims to, but the standards it finally sets would be higher than what India is currently ready to agree upon. Third, the current India-ASEAN FTA has strict limitations on rules of origin (35% or more value added from the country where the goods are being imported) without any rules (PSR), which make in value chains tougher. This is because value chains involve trade in parts and components and a product imported by a country involves value added by different countries in the chain. Thereby, the possibility of a high value originating in a particular country reduces. The standards set at the RCEP would be crucial in determining India’s future trade potential with ASEAN and India should approach the negotiations with a focus on rejuvenating its manufacturing potential.

The ‘Make in India’ initiative in conjunction with the recently implemented investment agreement between India and ASEAN should help chisel Indian policies to facilitate India’s integration in the Asian value chain in sectors like electronics, gems and jewellery, automobiles and pharmaceuticals5. The first three are sectors which have the longest and value chains with multiple stages of production and hence their integration should be relatively easy. India’s integration in the automobile sector is already especially with countries like Malaysia, Thailand and Indonesia. India’s advantage in generic pharmaceuticals should be leveraged by ASEAN countries through investments that would facilitate Indian pharmaceuticals to become innovation-oriented.

The ASEAN Economic Community (AEC) will transform ASEAN into a region with free movement of goods, services, investment, skilled labour and capital. This is particularly relevant for the CLMV nations (Cambodia, Laos, Myanmar and Vietnam) promising equitable development6. The free mobility of labour within the AEC region might hamper India’s prospects in terms of mobility of skilled workers, which has just been implemented with the India-ASEAN Services agreement7. It could also choke out some of the investment that India might have obtained from the region due to flow of capital within the region.

ASEAN imports services to the tune of US$300 billion (ASEAN, 2013). Trade in services like information technology (IT), business services and IT-enabled services are areas of strength for India. ASEAN countries like have been exporting low-skilled IT services and feel threatened by India’s services agreement with ASEAN. Hence, there are separate schedules for Philippines and Indonesia in the current services agreement. Additionally, services trade through mode 4 (movement of natural persons) remains a contentious issue (Nataraj and Sinha 2013)8.  An appropriate Mutual Recognition Agreement (MRA) is necessary, recognising degrees granted by institutes of trade partners. However, even for the AEC, an MRA is hard to come by. Hence, challenges towards having an MRA between India and entire ASEAN are significant. However, prospects of a services value chain between India and ASEAN nations like Thailand could reap rich dividends for either partner (Goyal and Mukherjee 2015).

While we recognise that the ASEAN-India economic relationship has grown remarkably starting 2002, there is immense potential to grow the relationship further through both trade and investment and by India integrating into the Asian value chain.

Industries like automobiles, gems and jewellery have seen some integration between India and ASEAN nations. The recently implemented investment agreement along with the ‘Make in India’ initiative should help such integration, targeting sectors like electronics and pharmaceuticals. India’s trade advantage as an exporter of professional services and IT-related services should see greater exports with the implementation of the services agreement.

Given the above opportunities, India might face challenges due to the existing “noodle bowl” of trade agreements and mega RTAs which facilitate ASEAN trade in GVCs. The effects of TPP and RCEP would require greater commitments which India would need to abide by, for entering the value chain. The current culture of reticence towards FTAs in India acts against prospects of integrating with value chains. The formation of the AEC could further erode India’s opportunity by allowing free flow of skilled labour and capital within the ASEAN region. Agreements reached at the RCEP would crucially determine India’s future trade and value chain integration with ASEAN.