India's energy consumption: The next 20 years 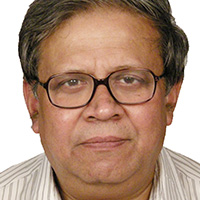 The environment is a concern the world over – and India is no exception. This column plots India’s energy consumption through to 2032, asking where the challenges lie and where policy reform might make a difference.

It is well known that the scope for energy conservation in India is enormous. There are huge gains to be made by upgrading technology, equipment and appliances in a wide range of applications – furnaces, motors, insulation systems, automobile engines, cooking burners, power generating systems, and so on. However, what is less well known is that the energy intensity of GDP in India has been declining ever since the introduction of economic reforms in 1991. A key question is whether India will realise some of its potential for energy conservation and thereby continue to reduce the energy intensity of its economy.

Energy consumption at the national level

In recent work (Sengupta 2012), I have looked at how different energy-consuming sectors1 of the economy respond to changes in the price of energy and changes in their own income (known as partial elasticities). Taking these responses, I have projected how companies will respond to forecasted changes in India’s economy, allowing me to project the energy-intensity of India’s economy up until 2032.

Table 1 gives these results with 2009-2010 as base for the four scenarios of GDP growth rates of 8% and 6% combined with no rise in the real price of energy beyond 2009-2010 and a 3% annual increase in real energy prices. As these have been based on the post-reform data of the period 1989-1990 to 2009-2010, these results strongly indicate that India has been already moving along an energy-conserving growth path and the trend looks set to continue.

Energy consumption at the industrial level

While at the individual industry level there has been a general decline in the energy intensity of production, future sustainable development requires further energy conservation at the level of the individual firm. This is important since many firms across various industries are inefficient by either national or international standards. In a recent study with Manish Gupta (Manish and Sengupta 2012), I find that the seven most energy-intensive industries in India each have high energy-saving potential. I find the potential for energy saving as percentage of the actual consumption to be in the ranges2 of 46%-88% for textiles, 43%-94% for paper and pulp, 51%-92% for iron and steel, 26%-94% for fertiliser, 37%-95% for chlor-alkali, 3%-84% for cement and 9%-58% for aluminium.

The study further assesses the behavioural response of firms in these seven energy-intensive industries to changes in the price of energy and other factors. Our estimates suggest that a 10% increase in the price of energy would result in a reduction in the demand for energy in the range of 2.99% (Iron and Steel) to 12.29% (Chlor Alkali) depending on the elasticity value in the selected industries3 and 9.9% for the entire registered manufacturing sector. Thus any energy price rise would result in energy conservation in these industries, although its impact on the demand for capital is ambiguous. These results caution us against the common perception that energy conservation would necessarily be capital-intensive in the Indian situation. More capital intensive technology uses more energy in several manufacturing industries like cement, iron and steel, textiles and all manufacturing.

Energy consumption in other sectors

Although industry receives most of the attention in energy conservation discussions because of its large share in total energy consumption, there is also huge scope for saving energy in other sectors such as agriculture, transport and lighting, though modernisation of machinery, equipment and infrastructure. In machinery, such as various types of motors, drives, capacitors, and buildings there is an energy saving potential of 10% to 20%. Meanwhile, in lighting of all kinds of commercial and institutional establishments there is the potential to reduce energy consumption by 50% to 60% and the use of efficient pump sets in agriculture has the potential to reduce energy consumption by 30% (Lenora 2010).

In the residential sector, switching to the use of more efficient refrigerators and air-conditioners is also going to be important for energy conservation as there will likely be fast growth in use of these energy-intensive appliances by India’s growing middle class. Solar hot water systems and solar cook stoves also deserve to be promoted in the interest of saving fossil fuels and energy.

Finally, inter-city transport offers substantive scope for energy conservation by switching from road to rail and from private to public transport, especially if public transport runs on electricity. For this to happen there must be a change in transport and urban development policies as a complement to energy policy.

While electricity is a high quality, clean and efficient fuel used widely across every segment of the economy and society, the power sector causes substantial material and energy losses and pollution in the process of its generation, transmission and distribution. The total energy loss as a share of throughput energy in the electricity industry in 2009 was of the order of 78.5%. The reduction of such losses is of critical importance for supply side efficiency improvement in the power sector. This can be achieved through higher boiler efficiency of coal-fired subcritical units and oil-based thermal units in the range of 35 to 38% efficiency and also by the upgrading of the Combined Cycle Gas Turbine (CCGT) to the range of 45% to 60% conversion efficiency. Apart from raising the conversion efficiency, the efficiency on the supply side can also be improved by reducing auxiliary losses from 6.8% on average for all types of plant technologies to 5% and the transmission and distribution losses from 25.8% in 2005 to 15% in 2031. India’s power sector reforms are supposed to provide an enabling legal and institutional framework so that the unbundled generating and distributing companies can work efficiently. However, the persistence of political interference in tariff setting and cross-subsidisation of power for agriculture and household sectors are standing in the way of diffusion of power-conserving technologies both in the end-use non-energy sector and in the energy conversion in the supply side of the power sector.

The behavioural response of the highly energy-intensive Indian manufacturing industries with high energy savings potential to changes in input and fuel prices shows clearly that tax instruments could have an effect on energy conservation in India. The capital subsidy, on the other hand, would be counter-productive at least in some industries where the relationship between capital and energy is one of complementarity rather than that of substitutes. However, the tax should take the form of an environmental or resource tax or as an excise duty but not as a rebatable tax like Goods and Services Tax (GST) as it is intended to affect the behaviour of the producing firms.

For the realisation of the potential in other sectors it is important to remove the barriers to energy efficiency improvements first through the introduction and enforcement of energy efficiency standards and second through the development of a greater awareness among consumers of such efficiency standards and building up their trust in the reliability of such certification and efficiency labelling. As the initial high cost of devices is often the major cause of barrier to energy conservation in the developing countries, the dissemination of such information is required to make the longer-term benefits clear to consumers.