In this article, Kunal Sen, Professor of Development Economics and Policy at the University of Manchester, evaluates whether MNREGA has achieved its broader development objectives. He further analyses why the programme’s implementation has been challenging, and what the implications of weak implementation have been for its objectives.

When the Mahatma Gandhi National Rural Employment Guarantee Act (MNREGA) was passed in the Lok Sabha on 23 August 2005 with a 100% majority, it was seen as an iconic Act that enshrined the right to employment in the Indian Constitution. There was a great deal of expectation about the ability of the programme to improve the lives of the rural poor, as well as to transform the relation between the State and the citizen in the manner the implementation was decentralised to Gram Panchayats. Ten years on, has the Act delivered on these expectations? What have we learnt about the anti-poverty effects of MNREGA as well as its broader transformative potential? What have been the challenges to implementing MNREGA, and what do we know about the drivers of implementation success and failure? In this article, I evaluate the success of MNREGA by asking three questions about its efficacy as a flagship social protection programme of the Indian government: (a) Has MNREGA achieved its broader development objectives?, (b) Why has implementation of MNREGA been a challenge, and what have been the determinants of successful (and unsuccessful) implementation?, and (c) What have been the implications of weak implementation of MNREGA (wherever it has occurred) for the broader development objectives of the Act?

A substantial empirical literature has looked at the effects of MNREGA on a range of outcomes starting from a narrower focus on poverty reduction to a wider focus on outcomes such as learning outcomes of children in households who have had access to MNREGA work. Given the demand-determined nature of MNREGA, which meant that households self-select into the programme, establishing causal effects of MNREGA on poverty and other outcomes has been challenging in the absence of experimental data.1 A common empirical strategy has been to use the phasing in of MNREGA initially to the 200 poorest districts in 2006, extended to 130 more districts in 2007, and to all districts in 2008. The evidence on the effect of MNREGA on household outcomes (such has an increase in wages or a reduction in distress migration) is mostly positive (though important caveats remain on whether effects are indeed causal). However, calculations of the net benefit of the programme, which take into account the fiscal costs, suggest that from a benefit-incidence perspective, it is not clear whether the large allocation of public expenditures on MNREGA can be justified (Imbert and Papp 2013). There may well be more effective ways to reach the poor at and the rationale for the programme may not be particularly compelling if the main objective was to reduce poverty and vulnerability of the poorest rural households.

The focus in the empirical literature has been on the material benefits that MNREGA brings to poor rural households. Yet the original intention of the Act was also to change the nature of the relationship between the State and the citizen by making the provision of employment by the State to those who need it the most a right, and not just an obligation of the State. The evidence on this, mostly from case studies, suggests that MNREGA may have led to the political empowerment of the poor and provided dignified work to them, in a context where the outside options in private labour markets were degrading and poorly paid wage labour, working for landlords, often in exploitative situations. While difficult to quantify, the transformative potential of MNREGA in changing citizen-State relations, especially for dalits2, adivasis3 and women, the three groups that MNREGA targeted in particular, may be the more important developmental outcome of MNREGA, rather than its poverty-reducing effect.

How well has MNREGA been implemented, and what have been the drivers of successful (and unsuccessful) implementation?

MNREGA has been poorly implemented so far, except in a few states. This in itself may not be surprising, given the large gap that generally exists between what the Indian State promises to do for the poor and what it actual delivers, and may be another reflection of India’s “flailing state”4. While the Act itself stipulates that “at least” 100 days of MNREGA work should be provided to all rural households that demand such work, only 3% of registered households in 2013-14 at the district level have obtained 100 days of MNREGA work. In the same financial year, the average MNREGA days provided per household has been a mere 36 days. The low uptake of MNREGA work has not been due to a lack of demand for the most part, but due to systematic rationing of MNREGA work by Gram Panchayats (Himanshu, Mukhopadhyay and Sharan 2015). More worryingly, MNREGA implementation has been particularly weak in the poorer Indian states (Figure 1). 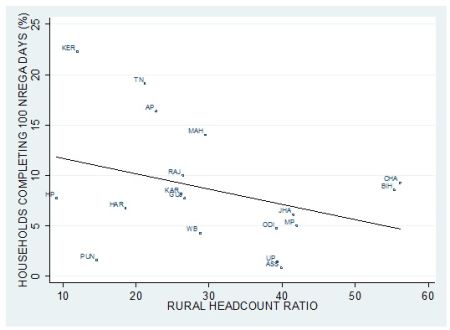 What have been the reasons for poor implementation of MNREGA? Lack of administrative capacity of the State has obviously been one important factor – MNREGA is a complex programme to administer and needs non-trivial effort by bureaucrats at the state and local levels to make it work, along with prior experience in administering large-scale programmes. It is not a coincidence that states that have had a successful record in administering and delivering other social welfare programmes (example, PDS (public distribution system)) such as Andhra Pradesh and Tamil Nadu were also very successful in implementing MNREGA. But political commitment mattered too, and states with weak administrative capacity such as Chhattisgarh could circumvent this disadvantage to some extent due to high political commitment from the ruling party (Chopra 2015). At the local level, where political parties (Gupta and Mukhopadhyay 2014) or ruling elites in villages (Roy 2015) saw clear electoral advantages in implementing MNREGA well, they made sure that MNREGA work was provided to those who demanded it.

Two clear lessons come out of the experience of implementing MNREGA for the past decade. Firstly, given the complexity of administering MNREGA (itself a design flaw of the programme), there should have been more emphasis in the early years of the programme on strengthening the capacity of state and local governments in poorer states. Then we would not have had the perverse outcome of MNREGA being least implemented in regions where the poor need it the most. Secondly, the decentralised nature of implementation of MNREGA has often worked to its disadvantage, with clear examples of ‘elite capture’, or where the sarpanch and local bureaucrats were simply not interested in implementing the programme well. This implies that there was a trade-off between the objectives of empowering local governments and providing social protection to the poor; advocates of MNREGA who wanted the scheme to be primarily implemented by local governments rather than by state and central governments, did not fully realise this.

What are the wider implications of poor implementation of MNREGA?

The poor implementation of MNREGA came in many different forms, but the most glaring issue has been the long delay in wage payments for those who worked under the scheme. As of 2013-14, 50% of MNREGA payments are delayed, and there is no district in India where MNREGA payments are not delayed. In a state like Bihar, 38% of payments are delayed by more than 60 days. Payment delays have increased since 2008 with the movement from cash payments to payments through bank and post office accounts and the complex procedures needed to approve payments for MNREGA workers.

Are these delays in wage payments relatively minor issues that do not take away the overall efficacy of the programme? It can be argued that in fact, with wage payment delays, and with little outside options for those who participate in MNREGA work, the present value of labour income of poor indebted workers is lowered over time, decreasing the value of their only asset – labour – as well as of household welfare. This may lead to greater participation of poor households in MNREGA to pay off their debt, suggesting that higher participation per se may not be an indication of the success of the programme (Basu and Sen 2015). Evidence suggests that this is indeed the case – districts with greater wage payment delay seem to have higher household participation in MNREGA. A clear implication here is that endemic wage payment delays contravene the very intention of MNREGA to provide social protection to the poor. While it can be argued that a flawed MNREGA is better than no MNREGA at all, such an argument - that invokes the second-best to justify a programme with high ambitions and large fiscal costs - is rather weak. We need to understand better the implications of a poorly implemented MNREGA for household welfare. Also, we need to find ways to reduce the high transactions costs associated with implementing MNREGA; these mostly arise because state bureaucracies have not been able to implement MNREGA in ways that make the most sense in a given institutional context.

MNREGA’s full potential yet to be realised

MNREGA, when it came into being, was seen as a transformative piece of legislation that would go a long way in addressing the chronic poverty that one witnesses in rural India. That it has not been achieved in the way that was envisaged by the advocates of MNREGA may be due to a certain naivety in understanding the implementation challenges and some of the features of the Act that were seen to be desirable. For example, the decentralisation of implementation of MNREGA to local governments may have actually hindered the success of the programme. However, MNREGA has radically transformed the manner in which poor rural households view their rights as citizens, and has served as a critical source of livelihoods for many of the poorest households at times when no work was available in private rural labour markets. MNREGA has not been a complete success, but it has significant potential to transform power relations in the rural countryside - a potential that has not been realised even 10 years after the initiation of the programme.