Gender inequality remains a huge issue in India and policies aimed at changing this are welcome. But this column finds that an unintended consequence of the introduction and spread of ultrasound scans in India is the abortion of female foetuses on an unprecedented scale.

India has a long history of son preference, reflected in greater mortality rates for girls and women over the life-course, arising from their relative neglect. A marker of this is that the sex ratio in India, the ratio of males to females in the population is, unnaturally, larger than one. Since the mid-1980s and most markedly since the mid-1990s, the all-age sex ratio has stabilised but the sex ratio at birth has risen sharply. This suggests sex-selective abortion or female foeticide. In recent research, my co-author and I estimate that nearly half a million girls were being aborted each year, on average, during 1995-2005. This is more than the number of girls born annually in Britain and it represents 6.2% of potential female births in India (Bhalotra and Cochrane 2010). We use the timing of the introduction and spread of prenatal sex detection technologies to show that this is a direct consequence of the availability of this technology. This result stands even after we account for trends in son preference, fertility preferences and the increasing educational enrolment of girls in India.

The practice of female foeticide is more prevalent among relatively rich and educated families. This flies in the face of ideas about backward women being enslaved to old customs. But it is consistent with ‘modern’ women being more receptive to new technologies and wanting fewer children. These factors appear to override lower self-reported ‘son preference’ among women of higher socio-economic status.

After taking into account differences in wealth and education among the religions, we find that Hindu women, especially high caste women, are more likely to conduct sex selection. There is no discernible evidence of sex selection among Muslim women. A likely explanation is that, even if they have a similar preference for sons, Islam is more averse to abortion. This reconciles with evidence that the sex ratio is more balanced in Pakistan and Bangladesh than it is in India. A recent study of Canada also observes that there is female foeticide amongst Indian and Chinese immigrants but not amongst Muslim immigrants (Almond, Edlund and Milligan 2009).

Amongst reasons that Indian families put enormous weight on having a son is that elderly parents live with their eldest son till they die, at which point the son lights the funeral pyre, and this is meaningful in Hindu culture. These needs are met by one son. A striking and novel finding of our research is that parents conduct pre-natal sex selection even after they have one son. Our research suggests that Indian families want two boys and one girl.

The technology available to detect the sex of a child before birth is improving continuously, enabling more reliable resolution of the foetal image earlier in pregnancy. At the same time, the development of smaller and more mobile ultrasound scanners has increased market penetration. Their use by rural households caught up rapidly, with initial uptake by urban households. The cost of an ultrasound scan in India is in the region of $12 which is about 1% of per capita income, and advertisements in rural areas highlight how small this sum is relative to the cost of a dowry.

Before our study there was considerable anecdotal evidence of abortion of girls in India but no clear causal evidence. As there are no direct records of the practice, sex selection is inferred from changes in the sex ratio at birth. Our strategy is essentially to use three decades of data on about half a million births to study how the sex ratio at birth changes upon the introduction of ultrasound. We employ a number of further statistical approaches to control for the role of other factors.

Strikingly, the emergence of female foeticide in the mid-1980s and its intensification in the mid-1990s coincided with a period of sustained economic growth in India. While the growth take-off is widely associated with deregulation of industry and trade, an unintended consequence is that it became easier to import ultrasound machines and, after 1994, for multinationals to start large-scale production in India. Although sex-selective abortion was made illegal in India in 1994, it has in fact continued since that date at an increasing pace.

While our study indicates that the availability of ultrasound scans has played a critical role in enabling abortion of girls, it also plays a positive role in improving pre-natal care. It would not therefore be desirable to ban the use of scanners. But once they are in use, it is difficult to monitor the ban on pre-natal sex detection because families and (often unqualified) private medical practitioners collude in evasion of the law.

The phenomenon of female foeticide touches on many of the dilemmas of modern times, including the ethics of scientific progress, gender equality, human rights and freedom of choice. Even where preferences over child sex are relatively balanced, as in the UK, so that issues of gender inequality and an unbalanced demography are muted, the ethical issues are alive. For example, the UK Human Fertilisation and Embryology Authority has banned sex selection for primarily moral reasons.

The scale of the problem is ominous of a future of unmarried men at the bottom of the socio-economic distribution in India, increasing violence against women and other ills of an unbalanced society.

Notes to Figure 1: Trends in the proportion of females at birth by birth order and previous sex composition (five-year moving averages). First births as well as later births in families with previous boys show no tendency for a deficit in girls to emerge with the appearance of ultrasound. 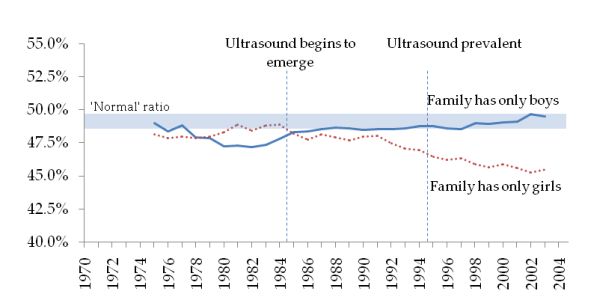 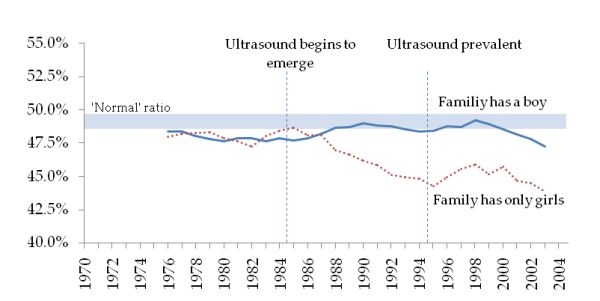