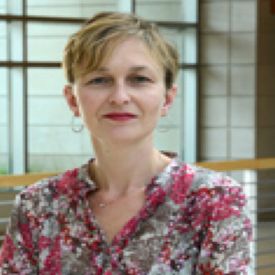 University of California at Berkeley

There is considerable evidence indicating that the Industrial Disputes Act (IDA), 1947 – which made it illegal for large companies to downsize – had a powerful disincentive effect for entrepreneurs in India. Using Annual Survey of Industries data, this article shows that constraints on large firms diminished since the early 2000s largely due to exploitation of a loophole pertaining to contract labour, rather than a de jure change in the labour laws.

In the late 1940s, newly independent India, fearful of the job losses if large British companies were to leave the country, passed a law that made it illegal for large companies to downsize. This law, which became known as the Industrial Disputes Act (IDA), 1947, was likely successful in ameliorating the immediate crisis, but it also likely distorted incentives for Indian entrepreneurs. Who would want to invest if one was stuck paying workers that are no longer needed if the investment turned out to be unsuccessful?

There is considerable evidence that the IDA did, in fact, have this powerful disincentive effect. First, the Indian manufacturing sector is characterised by a large number of informal firms, a small number of large firms, and a high marginal product of labour1 in large firms. Second, while US manufacturing firms typically grow by a factor of eight over three decades, the typical manufacturing firm in India does not grow at all over its life cycle2. These facts suggest that a law like the IDA discourages Indian entrepreneurs from growing, and consequently there are few large productive firms and too many small unproductive firms.

In a recent study (Bertrand et al. 2021), we show that constraints on large firms appear to have diminished since the early 2000s, despite the fact that there has been no change in the IDA. The reforms that started in 1991 largely dismantled reservations for small-scale industries, and the industrial licensing laws, but left the IDA untouched. Consider the evidence in Figures 1 and 2, drawn from the micro-data of India’s Annual Survey of Industries. Figure 1 plots the distribution of employment by firm size in Indian manufacturing. It shows that the employment share of large Indian firms increased between 2000 and 2015. Figure 2 shows that average value-added (VA) per worker is increasing in firm employment in 2000 and 2015, but this relationship is more attenuated in 2015 compared to 2000, particularly for firms with more than 100 workers. If the marginal product is proportional to the average product of labour, and profit-maximising firms equate the marginal product of labour to the cost of labour, then this suggests that the effective cost of labour has diminished for larger Indian firms compared to smaller firms. 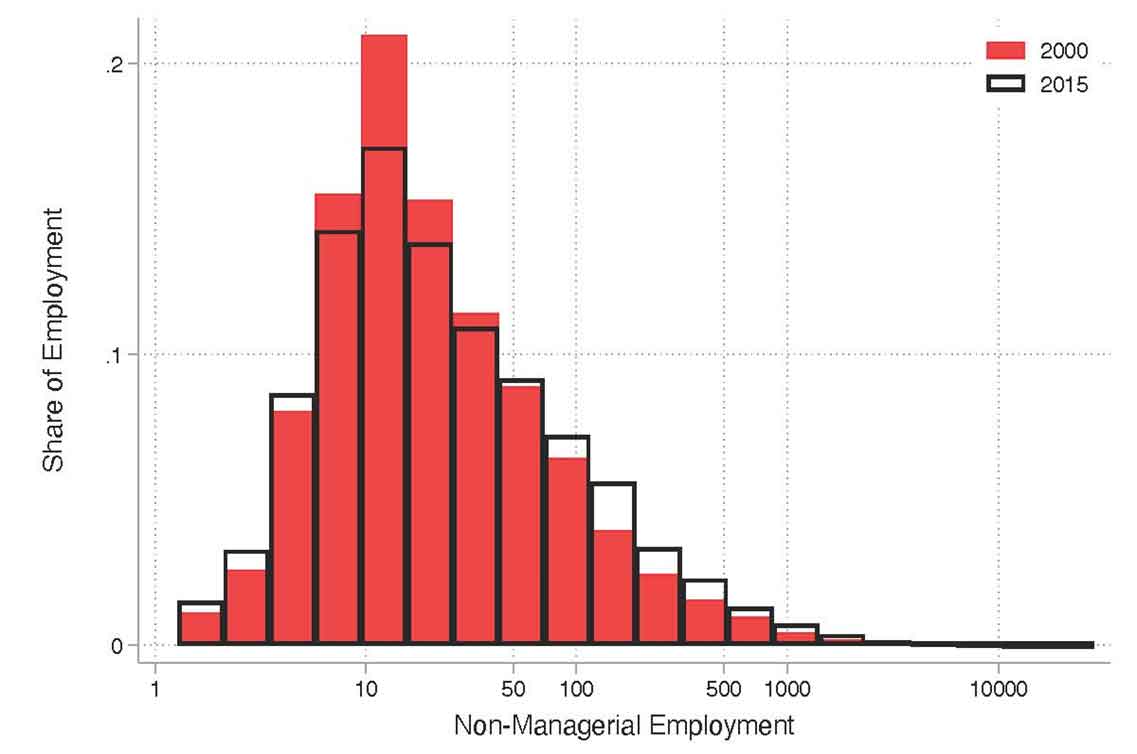 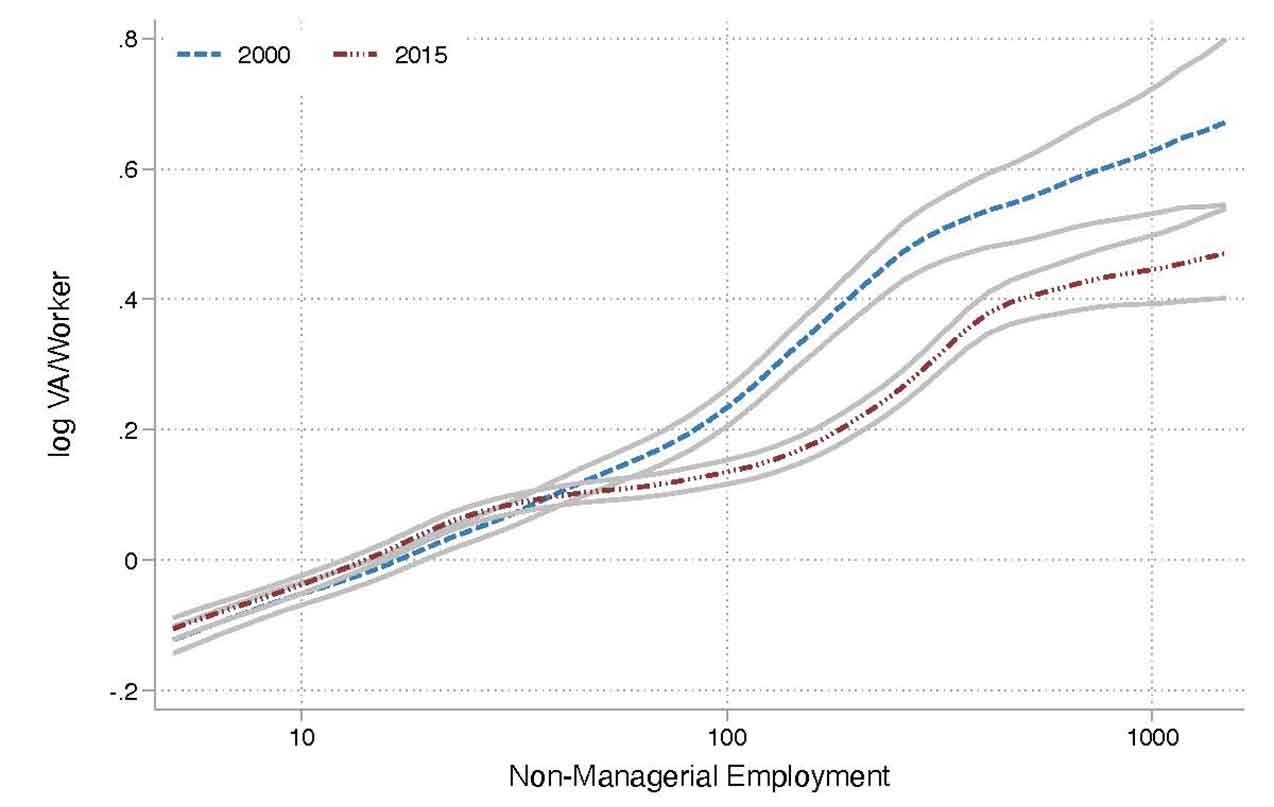 Notes: (i) Figure shows coefficients and 95% confidence intervals3 from non-parametric regressions of log VA/worker on log employment using Epanochnikov kernel with a bandwidth of 0.6. (ii) Employment here is defined as the number of non-managerial workers. Log VA/worker is residualised by industry and year fixed effects4.

The decline in the bite of the IDA does not come from a de jure change in Indian labour laws, but rather due to a workaround from the rapid development of the labour contracting industry in India since the early 2000s. The IDA only applies to a firm's full-time employees; workers supplied through third-party intermediaries are not the firm's employees for the purposes of the IDA. Contract workers are employees of the staffing companies, and the staffing companies are required to abide by the IDA. This loophole provides customer firms with the flexibility to return the contract workers to the staffing company without being in violation of the IDA. Figure 3 shows the probability that contract workers account for more than 50% of total firm employment as a function of total firm employment. Among smaller firms, there has been no discernible increase in the share of firms where contract labour is at least 50% of the workforce. In contrast, there has been a dramatic increase among larger firms, particularly those with more than 100 workers. We trace this increase to a 2001 decision by the Supreme Court of India that made large firms less reticent to rely on a large pool of contract workers for ‘core’ activities5. 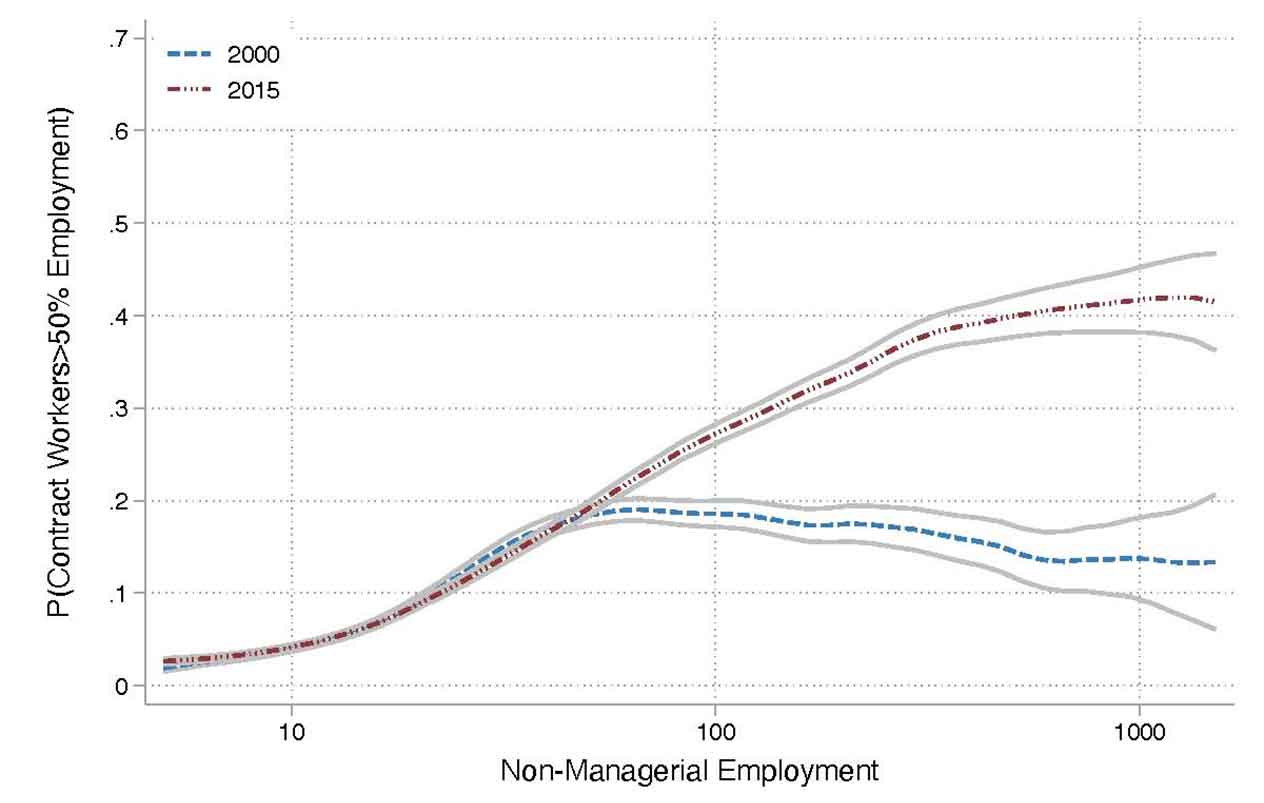 Note: Plot shows point estimates and 95% confidence intervals from non-parametric regression of the probability a plant hires more than 50% of its non-managerial workers through contractors on (log) non-managerial employment.

In sum, the relaxation of labour constraints facing large Indian firms since the early 2000s came from exploiting a loophole rather than a de jure change in Indian labour laws. In this sense, this episode is another example of what many people in India call jugaad, which very roughly, means finding informal solutions to problems. But as with all informal solutions, it potentially raises other costs that may make further progress difficult. In particular, one may be concerned about further growth potential when most productive firms rely on contract labour for such a large share of their workforce. Future work should also consider the implications of this development for labour training, skill upgrading, and bargaining power.