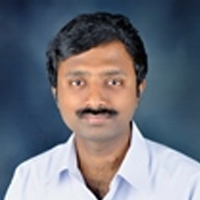 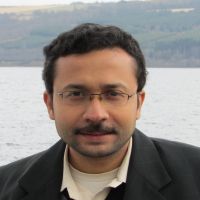 Section 135 of the Companies Act, 2013 mandates all Indian firms above certain size or profit threshold to spend at least 2% of net profit earned in preceding three years on Corporate Social Responsibility (CSR) from 2014-15 onwards. The existing literature is divided on whether CSR spending helps improve firm performance. Analysing firm-level data from India for 2006-2016, this column finds that CSR spending has a significant positive impact on firm value.

In 2013, India became the first country in the world to make it mandatory for firms above certain size or profit threshold to spend on CSR. According to Section 135 of the Companies Act, 2013, firms with net worth over Rs. 5 billion or net sales over Rs. 10 billion, or profit before tax (PBT) over Rs. 50 million should compulsorily spend at least 2% of their average net profit earned over the three preceding years on CSR from 2014-15 onwards (CSR law hereafter). Interestingly, a subsequent study by KPMG found that in 2015-16, Indian firms committed to spending more on CSR than what was required by law1. Hence, it is imperative to ask why this is so.

One tenable explanation for this could be that CSR spending actually enhances firm value. Existing studies that examine CSR-firm value relationship in the Indian context report mixed results (Sarkar and Sarkar 2015, Manchiraju and Rajgopal 2015). However, it is pertinent to note here that the CSR law is applicable on a ‘comply-or-explain’ basis in the initial 2-3 years. Therefore, there is scope for firms above the stipulated thresholds to decide whether they will comply and spend on CSR immediately from 2014-15 or later. In other words, early complying firms might be different from late complying firms in terms of several unobserved firm-level characteristics such as managerial efficiency, board’s commitment to the society, etc.2. Existing studies on CSR in Indian context fail to address this issue with empirical rigour. In recent research, we seek to examine the impact of mandatory CSR spending on firm value after accounting for this fact (Bhagawan and Mukhopadhyay 2017).

We use Tobin’s Q as a measure of firm value. Tobin’s Q at the firm-level is measured as a ratio of the book value of total assets less the book value of equity plus the market value of equity to the book value of total assets. We consider all firms listed on the National Stock Exchange (NSE) during the period 2006-20163. The data is from the ProwessIQ database maintained by CMIE (Centre for Monitoring Indian Economy Private Limited). Since data on CSR spending is not readily available for all firms for all years, we compute CSR spending as the sum of “social and community expenses” and “environmental and pollution control related expenses”4.

We further classify the sample firms into two broad categories. The first category includes those firms that spent on CSR for the first time in 2014-15 or later (treatment group). The second category consists of firms which did not spend on CSR during 2006-2016 (control group). Firms which do not fall into either of these two categories are dropped from the study sample.

As a first step, we match ‘treatment’ firms with ‘control’ firms based on observable characteristics such as firm size (based on total assets), liquidity (measured in terms of cash ratio), and so on, during pre-treatment year 2005-06. We estimate probability (propensity scores) of falling into treatment group for all the firms in both treatment and control groups using the aforementioned firm characteristics and match treatment firms with control firms having approximately equal probabilities5. Using the firms thus matched, in the second step, we used difference-in-differences (DID) as a strategy for estimating the impact of mandatory CSR spending on firm value6. We first compute difference in average firm value between treatment and control groups during pre-treatment period (2006-2014) and post-treatment period (2015-2016). Next, we compare these differences between the groups across the two time periods. Any significant difference so found may be attributed to enactment of the CSR law and hence, considered as an estimate of the impact of the law in question. We further test robustness of our results using several alternative econometric specifications, one of which is regression discontinuity design (RDD). The basic idea behind RDD is that firms just below the CSR law threshold and the firms just above the threshold are otherwise similar in terms of most firm-level characteristics except for CSR expenditure. Hence, any difference in firm value between above threshold and below threshold firms is purely attributable to enactment of the CSR law.

Figure 1 presents our main estimation results along with results from other robustness tests. Looking at the graph (1st bar), we can see that the impact of mandatory CSR spending on firm value is positive and statistically significant. It is also economically significant. The result suggests that treatment firms, on average, have 10.6% higher firm value as compared to control firms7. Figure 1 shows that this result is fairly robust to addition of other firm-level characteristics (2nd bar) such as selling intensity, efficiency (measured by cost of goods sold as proportion of total sales), and capital spending (measured by capital expenditure as a proportion of sales), and alternative estimation methods (4th bar). We also find that certain firms that were not affected by the CSR law spent voluntarily on CSR in 2014-15 or later8.

At this juncture, the following point is worth mentioning: using data for the time period 2006-2010 with 2007-08 as the hypothetical year of CSR law enactment, we find (3rd bar) that the firm value of treatment and control firms has been on similar time trend before 2014-15 and hence our main estimation results are valid. 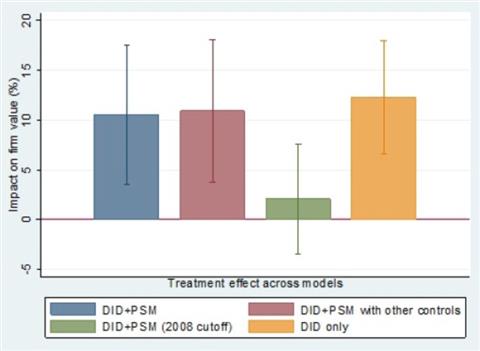 Note: Authors’ estimations based on firm-level regressions. PSM stands for Propensity Score Matching. Height of the bars indicates magnitude of the regression coefficients where the dependent variable is Tobin’s Q measured in log terms. Estimated coefficients represent impact of the CSR law in terms of percent changes in Tobin’s Q of treatment firms vis-à-vis control firms. Other firm-level controls considered are selling intensity, cost of goods sold as a proportion of sales, and capital spending. 95% confidence intervals are shown for different estimation models.

According to the Companies Act, 2013, the threshold for mandatory CSR spending in terms of PBT is stipulated at Rs. 50 million. Therefore, in Figure 2, we examine the relationship between firm value and PBT. We use the threshold (dotted line) in Figure 2 and find a distinct jump or discontinuity at the said threshold. Thus, firms just above the stipulated PBT threshold who are required to spend on CSR have higher firm value, on average, as compared to firms who are just below the PBT threshold.

Figure 2. Relationship between firm value and profit before tax 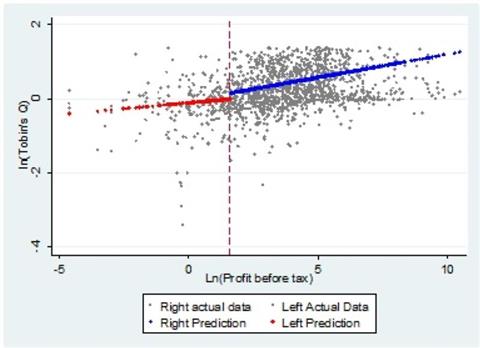 Note: The above graph shows regression discontinuity design (RDD) as an identification strategy to estimate the impact of mandatory CSR on firm value. The dotted red line indicates the stipulated threshold (Rs. 50 million). Sample data for 2014-15 and 2015-16 are used. Firms to the right of the stipulated PBT threshold are required to spend on CSR. The blue line represents estimated average firm-level Tobin’s Q for firms affected by the CSR law. The red line represents estimated average Tobin’s Q for firms that are unaffected by the CSR law.

In this study, our objective is to empirically examine the impact of mandatory CSR spending on firm value. The Companies Act, 2013, in its current form, provides relaxation in terms of CSR spending by making it ‘comply-or-explain’ in the initial two to three years for affected firms. Thus, even after passage of the Act, spending on CSR in initial years remains largely discretionary. After controlling for potential differences between early complying firms and late complying firms, and several other firm-level characteristics, our results suggest that mandatory CSR spending does have a positive and statistically significant impact on firm value. One limitation of this study is that we cannot comment on the type of CSR spending that matters for enhancing firm value, and this could be a direction for further work in this area.

Do firms in India perceive themselves to be e-ready?

How Important are credit constraints for small firm growth?