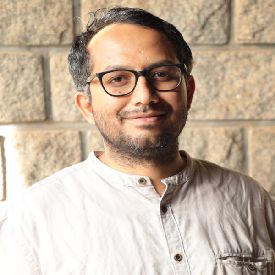 Near-perfect segregation and hierarchical ordering of residential space, based on caste or religious identity, is a well-known feature of rural India. Studies have also documented the persistence of such residential segregation in urban India. This article presents new research that develops the first systematic, comprehensive portrait of the association between urbanisation levels and the extent of residential segregation. It shows that urbanisation has not made a dent in spatial marginalisation of Dalits and Muslims.

Near-perfect segregation and hierarchical ordering of residential space, based on caste or religious identity, is a constitutive feature of India’s agrarian social order. It is no surprise that segregated villages are presented as a central stylised fact in introductory rural sociology textbooks (Desai 2016). What impact has urbanisation had on these traditional patterns of residential segregation? Several ethnographic and small-scale quantitative studies (Gist 1957, Gould 1965, Mehta 1969, Susewind 2017) have documented the persistence of residential segregation in urban India. In this article, we summarise findings from our research that builds on this corpus and develops the first systematic, comprehensive portrait of the association between levels of urbanisation and the extent of residential segregation (Bharathi, Malghan and Rahman 2020).

We expand on an earlier I4I article (co-authored with Sumit Mishra), where we argued that the census enumeration block is the appropriate neighbourhood unit for studying residential segregation. Our previous research, like all other quantitative studies of residential segregation, relied on the national census data (albeit at much higher spatial resolution). However, the Indian national census only reports broad demographic aggregates – Scheduled Castes (SCs), Scheduled Tribes (STs), and a residual Others (OTH). Each of these coarse aggregations (and especially the residual OTH) contain thousands of caste and religion groups that traditionally do not share neighbourhood space.

We introduce a new dataset from the state of Karnataka containing independent India’s first census-scale enumeration covering approximately 60 million people, and coding of 700 elementary caste (or jati) and religion categories. This unique dataset allows us to overcome data limitations that have plagued previous attempts to combine caste and religion data.1

The residential segregation literature has been dominated by the ‘majority-minority’ dyadic paradigm developed in the context of segregation in the US (Massey and Denton 1985, 1989). This framework is, however, not analytically tractable when there are hundreds of castes and religious groups with no group that enjoys universal plurality, let alone a majority. Second, as we show in our previous research, urban residential segregation in India is multi-scalar. There is segregation at the city level so that each town contains only a small fraction of the demographic diversity of the entire urban population. Wards are segregated (sometimes gerrymandered2, given that wards represent the elementary political unit in Indian cities), and neighbourhoods within wards are further segregated.

The dissimilarity index (including spatial and multi-group extensions) has been the workhorse metric for quantitative studies of segregation in India (Adukia et al. 2019; Bharathi et al. 2019, Sidhwani 2015, Singh et al. 2019). However, the dissimilarity index is not well-suited for describing multi-group, and especially multi-scalar segregation (Chodrow 2017, Olteanu et al. 2020, Roberto 2016). We adapt the classical Kullback-Leibler (KL) divergence metric (Kullback and Leibler 1951) to develop a multi-group and multi-scalar framework for urban segregation in India. The KL metric is additively decomposable so that the neighbourhood-level segregation in a town can be decomposed into intra-ward and between-ward components. To underscore the need for a metric that is consistent with multi-group and multi-scalar segregation, consider the distribution of four aggregate demographic groups depicted in Figure 1. Mysuru, the third largest city in Karnataka, has high degree of Muslim segregation at the ward scale. About 50% of wards in the city do not contain any Muslim population. Conditional on this high degree of segregation at the ward level, it is not surprising that Muslims live in highly segregated neighbourhoods (bottom left panel of Figure 1). 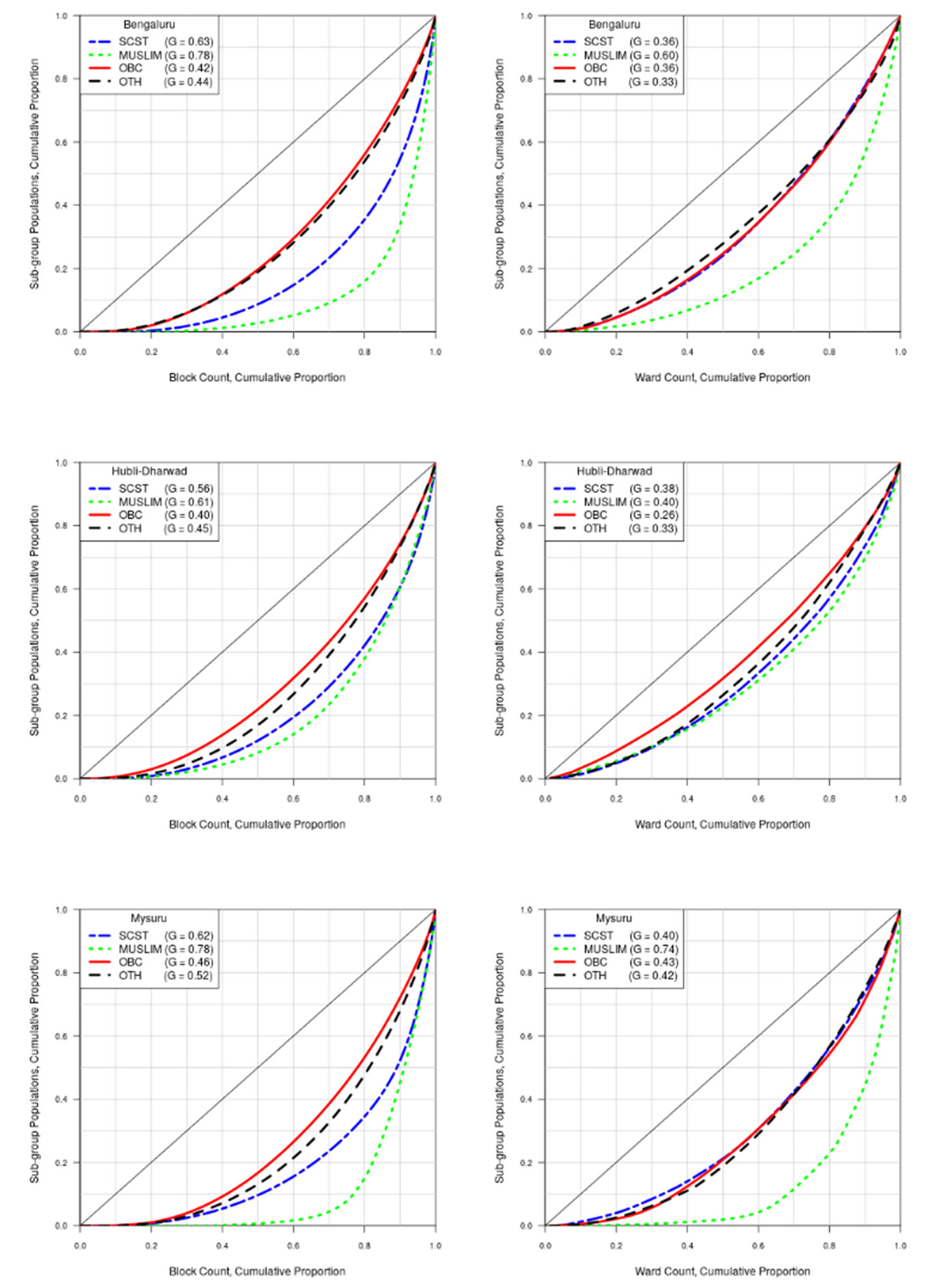 In contrast with Mysuru and Hubli-Dharwad, Bengaluru has more diverse wards. Thus, the fact that Muslims in Bengaluru live in neighbourhoods that are as segregated as Mysuru (both cities have a Muslim Gini concentration index3 of 0.78) is surprising, conditional on wards themselves being diverse. The KL metric that we use to measure segregation quantifies this basic intuition.

In Table 1 we present the summary segregation statistics for the entire state (355 census designated towns, 5481 urban wards, and 45,117 census blocks; with data aggregated from 4.96 million urban households). We mapped the nearly 700 endogamous caste and religion groups into eight administrative categories that are politically salient in Karnataka (this eight-fold administratively constructed taxonomy is used for state-level affirmative action programmes for employment and admissions at state universities).

For the first time in India, the use of household-level microdata for segregation analysis enables us to study how segregation differentially impacts social groups. The last three columns of Table 1 present the summary of segregation ‘experienced’ by the average household from different groups (respectively, neighbourhood diversity measured by the standard fractionalisation index; ward diversity; and the KL divergence metric, DKL4, that measures how neighbourhood demography diverges from ward-level demographic composition). The average Muslim and Dalit5 (SC) households reside in the least-diverse neighbourhoods. The average upper caste household (that are the most numerically preponderant within the OTH group) reside in neighbourhoods that are 40% more diverse than neighbourhoods where the average Muslim household resides. Unlike Dalits, Muslims are segregated at the ward level, too. Despite the fact that Muslims reside in the least-diverse wards, the mean (average) ward-neighbourhood segregation experienced by a Muslim household (DKL) is marginally higher than intra-ward segregation of the average SC household. Our findings confirm the anecdotal accounts of religion-based segregation in Indian cities.

Do ward diversity and city size matter for segregation? 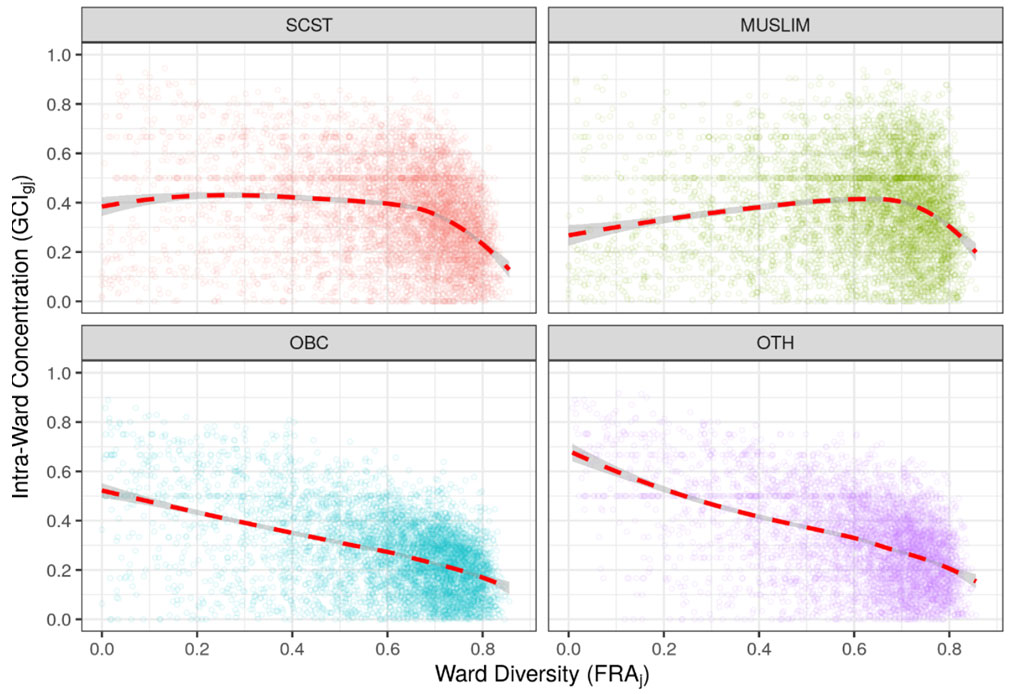 The pattern of segregation that we have described here is uncorrelated with city size, as seen in Figure 3. The figure depicts 355 census-designated urban towns in Karnataka that include peri-urban centres that lie in the penumbra of what constitutes ‘urban’, as well as Bengaluru, one of India’s most globalised metropolises and home to over 10 million residents. The figure shows that city-wide diversity is largely independent of city size. The within-ward component of total segregation coincides with total segregation for the smallest towns that have a single ward so that there is no ‘between’-ward component. 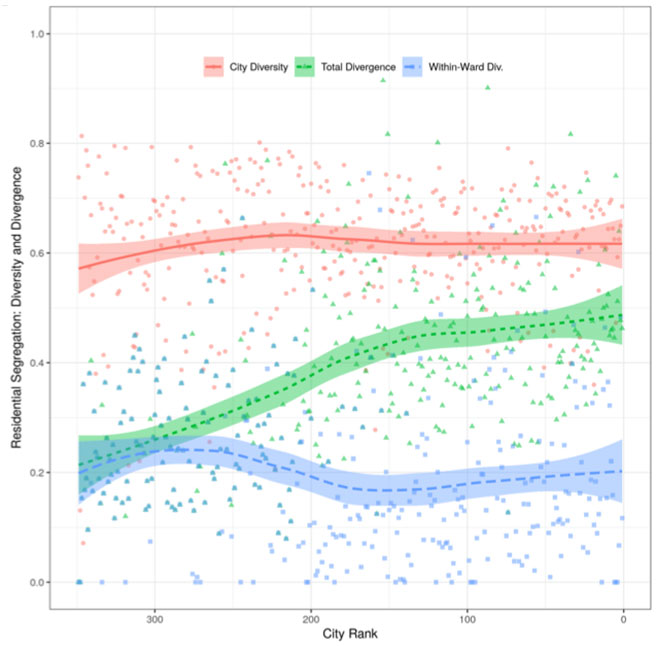 Persistence of spatial marginalisation of Dalits and Muslims in urban India

Using microdata from independent India’s first census-scale enumeration of elementary caste and religion categories, we have shown that urbanisation has not made a dent in spatial marginalisation of Dalits and Muslims. These groups continue to be confined in a ‘permanent cordon-sanitaire’ – that is they continue to live in segregated regions within the city – not unlike in the hierarchical social order of village India.