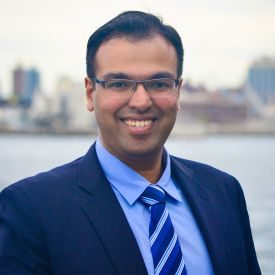 Violence against women is a problem worldwide, with economic costs ranging from 1% to 4% of global GDP. This article investigates if the magnitudes and types of violence against women have changed during the Covid-19 lockdowns in India. It shows that domestic violence and cybercrime complaints have increased, while rape and sexual assault complaints have decreased, in districts with the most stringent restrictions.

One in three women experience intimate partner violence (IPV) worldwide, and the economic costs of this violence range from 1% to 4% of global GDP (gross domestic product) (Devries et al. 2013, García-Moreno et al. 2015, Ribero and Sánchez 2005). UN Women has referred to the rise in violence against women during the Covid-19 pandemic and accompanying lockdowns as the “Shadow Pandemic” (UN Women, 2020). In new research, (Ravindran and Shah 2020), we focus on violence against women in the country that has been ranked the world’s most dangerous country for women: India. In particular, we investigate if the magnitudes and types of violence against women have changed during the Covid-19 pandemic and lockdowns in India.

We use variation in the intensity of government-mandated lockdowns in India to examine the effects on complaints of domestic violence, cybercrime, rape and sexual assault. We use data on complaints received by the National Commission for Women (NCW) from across the country. These are public-access administrative records given by district and month. The data are disaggregated by categories of complaints, which we broadly group into: (i) domestic violence (ii) cybercrime (iii) harassment and (iv) rape and sexual assault. We focus on the period January 2018-May 2020 in our analysis because frequency of violence varies throughout the year with some months experiencing greater amounts of violence. By including two years of data prior to the Covid lockdowns, we are able to control for this seasonality of violence in the analysis.

Figure 1. Complaints received by the National Commission for Women 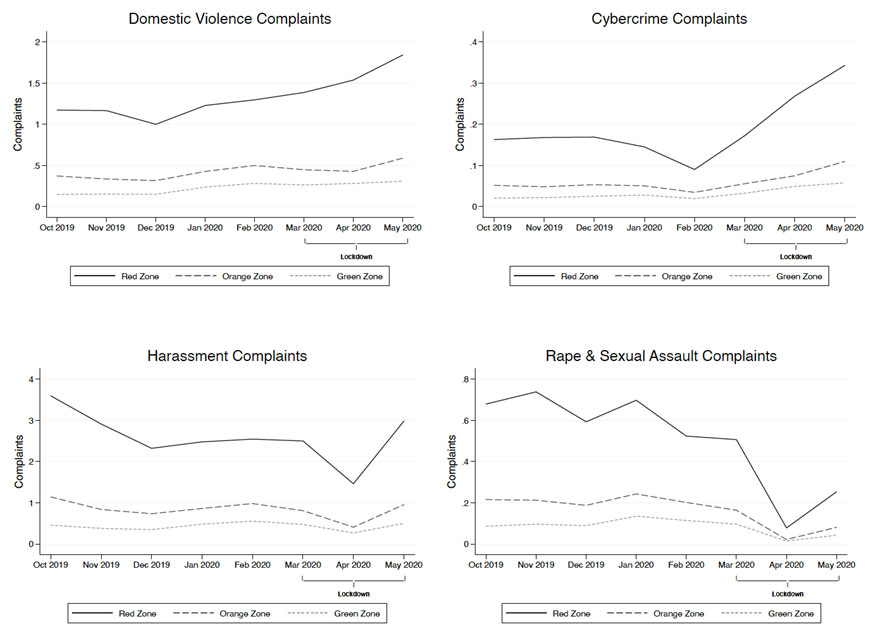 Notes: The figure plots the district mean (average) number of complaints received by the NCW during October 2019-May 2020, by lockdown zone colour category (red, orange, and green). India imposed a nationwide lockdown on 25 March 2020.

In addition to the variation across time, we also exploit spatial variation in lockdown restrictions based on the classification of all districts into red, orange, and green zones in April and May 2020. Districts in the red zone saw the strictest lockdown measures, while orange and green zone districts saw fewer restrictions. The classification was based on several factors including the number, and the doubling rate of Covid-19 cases. Out of 639 districts, 120 districts were classified into the red zone, 257 into the orange zone, and 262 into the green zone. Using data from the Google Community Mobility Reports, we verify that the severity of lockdown measures by zone colour categories affected mobility most strictly in April and May 2020 in red zone districts, as expected by the policy.

We use a ‘difference-in-differences’1 design to study the differential impact of complaints in districts most affected by the lockdown measures relative to districts least affected by the measures. In our research design, we use the classification of districts and lockdown measures by red, orange, and green zones, and show the results by month. We flexibly account for country-wide trends in complaints made to the NCW over time, using variation within a given month and year across districts, in addition to variation within a given district over time.

Using variation in the intensity of government-mandated lockdowns in India, we show that domestic violence complaints have increased 0.47 standard deviation2 (131%) in May 2020, in districts with the strictest lockdown rules. We find similarly large increases in cybercrime complaints in districts with the strictest lockdown rules. Interestingly, rape and sexual assault complaints have decreased by 0.39 standard deviation (119%) during the same period in these same districts, consistent with decreased female mobility in public spaces, public transport, and workplaces (see for example, Borker 2018). Importantly, these results show that women face a portfolio of danger, and the same policy can improve certain types of violence outcomes while exacerbating others.

The role of attitudes toward violence against women

We also explore the role of attitudes toward domestic violence in explaining the changes in domestic violence complaints during the lockdowns using data from the National Family Health Survey 4 (2015-2016). The survey asks – separately to husbands and wives – whether a husband is justified in hitting or beating his wife in a number of circumstances, including neglect of the house or children, improper cooking, disrespect for in-laws, and refusal to have sex. We average and aggregate individual-level self-reported responses separately across women and men to the district level, to obtain district-level attitudes toward domestic violence.

While most studies only focus on domestic violence, we study a portfolio of potential violence outcomes faced by women (domestic violence, cybercrimes, harassment, rape and sexual assault) and show that the same policy can have variable impacts depending on the outcome of choice. While the Indian lockdown did cause a shadow pandemic in which violence against women increased at home and on online platforms, it also decreased complaints related to rape and sexual harassment, highlighting how the same policy can impact violence against women in different ways.

Our findings that attitudes toward domestic violence play an important role in the incidence and reporting of domestic violence during the lockdown suggest that additional interventions are needed to reverse the trends in violence against women. For example, Behaviour Change Communication (BCC) interventions have been shown to be effective in reducing physical violence in Bangladesh (Roy et al. 2019). Shah and Seager (2019) show that a soccer intervention to empower and change social norms targeting boys and young men decreases adolescent female reports of intimate partner violence. Dhar et al. (2018) also find that a school-based intervention in India that engaged adolescents in classroom discussions about gender equality saw programme participants reporting more gender-equitable behaviour. Social norms and attitudes around violence are important drivers of both violent behaviour and reporting.