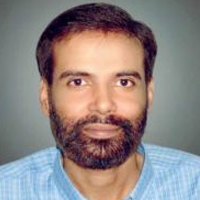 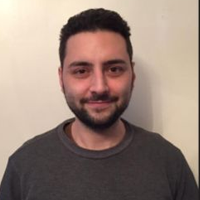 Homestead land rights, that is, the security a household enjoys over the plot of land on which its dwelling is built, shape livelihoods and living standards for poor and marginalised populations in rural areas. This column reports initial findings from an impact evaluation of a programme that seeks to improve homestead rights in Bihar through the formation of village-level community-based organisations.

There is an emerging consensus that ‘homestead land rights’ shape livelihood and living standards in a variety of ways. The term ‘homestead land rights’ refers to the security a household enjoys over the plot of land on which its dwelling is built. In recent years, governments and donors have invested in attempts to clarify and protect homestead rights. But the places most in need of rights protection and public service delivery often face grave governance challenges. Organisational gaps, corruption, and elite capture disrupt the flow of entitlements and render even apparently well-designed policies ineffective.

Bihar represents a case in point – even as its population suffers from high poverty rates and social underdevelopment, the state has been consistently unable to deliver resources to alleviate these problems. A recent evaluation of the state’s Right to Work programme found that, if fully implemented, the programme could reduce poverty by 14 percentage points. But because of implementation breakdowns it has managed only a single percentage point reduction (Dutta et al. 2014). A similar gap between policy and implementation is evident for homestead land. Although Bihar laws guarantee the right to title for landless rural households, a large proportion of the state’s Scheduled Caste (SC) community − the poorest and most marginalised social category in the state − lives without title.

Given prevailing capability traps, how best can SC households’ homestead rights be protected? One element associated with past land rights improvements has been mobilisation of community-level organisations, and this approach has seen some success in other service delivery sectors. To better understand whether and how this approach can work, we conducted an impact evaluation of a programme that seeks to improve homestead rights in Gaya, a district of Bihar, through the formation of village-level community-based organisations (CBOs). In the remainder of this column we describe the programme and study design, and outline initial implications for administration and policy.

Why might lack of homestead title be a problem for rural SC households in Bihar? Households may suffer a devastating loss of assets if dispossession occurs. Lack of homestead title may disincentivise investment in dwellings or in homestead-based livelihood activities like animal rearing. It could put downward pressure on wages. And title is required to access certain government entitlements.

Given all of this, why do so many households remain untitled? There may be a lack of available information on homestead titling rights. Furthermore, title applications in Bihar include long, complex forms, and there is widespread illiteracy within the region’s SC community. The process requires endorsement by officials at multiple levels, but many lack a fixed address or contact number. Even when an application reaches the relevant government official, they may lack the incentive to fairly and efficiently process the application, for example, to avoid becoming entangled in controversy or because other activities are more lucrative.

Unlike many of the social accountability initiatives evaluated in recent years that focus on information-related mechanisms (Lieberman et al. 2014, Ravallion et al. 2015, Yanez-Pagans and Machicado-Salas 2014), this model centres on the creation of an organisation with the mandate of facilitating homestead titling and rights protection more broadly. Beyond the homestead sector, analysis of this alternative model constitutes one of this study’s main contributions.

Once established, CBOs identify untitled SC households within their communities and help to complete the applications of those interested in seeking title. When applications have been prepared, the CBO delivers them to the appropriate local government office and follows up as needed, if necessary, mobilising the community in pressuring government officials to process the applications efficiently. This theory of change is depicted in Figure 1.

We conducted an impact evaluation of the Homestead Programme to address three primary questions. First, what was the land rights and livelihood situation at baseline? Second, what was the impact of the programme on titling rates, subjective land security, livelihood, and access to government services? Third, through what mechanisms did the programme achieve impact, or, conversely, at which point did the theory of change fail to unfold as planned?

At the core of the impact evaluation is a randomised field experiment. Deshkal Society had planned to implement the programme in 72 villages at the beginning in 2016, so we selected 144 villages and randomly assigned half into a ‘treatment’ group that would receive the Homestead Programme and half into a ‘control’ group that would not. We conducted a baseline survey before the random assignment and a midline survey roughly six months after programme onset. An endline survey will be carried out roughly a year after the midline.

Because only the baseline and midline surveys have been conducted so far, results remain provisional; yet some insights are already evident.

Exploring the situation at baseline, we found that dispossession is rare within the study sample. However, partial encroachment is widespread. Because money constraints are more often cited to explain lack of dwelling investment, the programme on its own is unlikely to affect this. Money, and especially space constraints emerge as more important than land security in guiding homestead-based livelihood investment decisions, but improved security could encourage an increase in animal husbandry investments at the margin.

Increased access to government entitlements constitutes the channel through which the Homestead Programme appears most likely to produce benefit. In particular, CBOs may allow households to access government entitlements while bypassing profit-seeking brokers. As it is currently, respondents report substantial bribe payments in accessing many services.

Quantitative results are consistent with the broad stories that unfold from the qualitative data. The Homestead Programme successfully established CBOs in treatment villages and facilitating title applications, but almost none of the households had yet received title six months after the onset of the programme. As expected, given the short time frame, there is no evidence of significant impact on dispossession, investment, or livelihood.

However, early signs of impact were already evident at midline. The programme increased belief among treatment households that they have a right to homestead title, while also raising concerns that they could be forced to leave or denied government services without holding title. Perhaps most promising, the treatment group already demonstrates significantly greater knowledge of and inclination to use government entitlements and, in the case of two entitlement programmes, already seems to have increased use (see Figure 2). 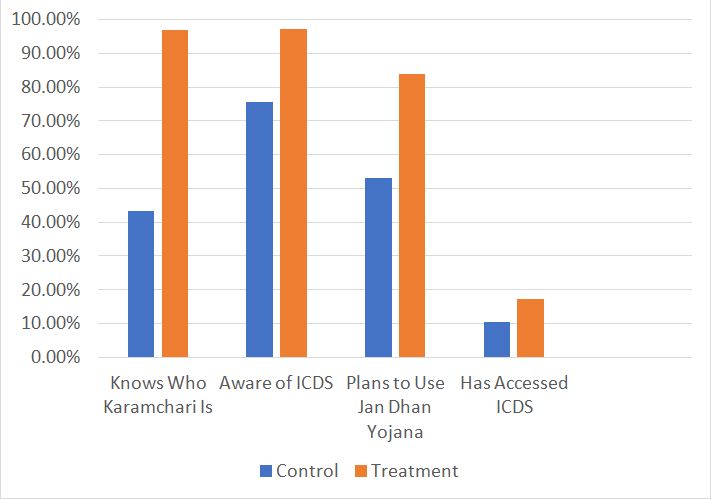 Notes: (i) Karamchari is Hindi for employee; here we refer to ‘revenue karamcharis’, the frontline officers responsible for homestead land issues at local government offices. (ii) Integrated Child Development Services (ICDS) is a centrally-sponsored programme aims to provide services to pre-school children in an integrated manner so as to ensure proper growth and development of children in rural, tribal and slum areas. (iii) Pradhan Mantri Jan Dhan Yojana (PMJDY) is the Indian government’s flagship financial inclusion scheme. It envisages universal access to banking facilities with at least one basic banking account for every household; financial literacy; and access to credit, insurance, and pension facility.

We put forward two main lessons for homestead administration from the research conducted so far. First, titling will remain convoluted and inefficient until all land records are published online. A significant portion of applications were rejected due to ineligibility factors that the household had not been aware of. For the CBOs and target households this meant wasted time and effort, and disappointment that could lead to disengagement. And it presented a waste for government as well, with already overburdened officials spending time reviewing applications that would not have been submitted in the first place had records been available.

Second, the number of steps involved in the application process means that it can drag on for months or longer. If the process is not shortened, unnecessary costs will multiply with any attempts to scale-up titling efforts. In particular, we suggest that block offices be given authority to approve parwanas2.

Moving to policy, we put forward three suggestions. First, given government capacity constraints, more collaboration with CBOs may offer a cost-effective means for improving rights protection and entitlement delivery. In particular, CBOs may provide vehicles for bypassing dalals3 and other corrupt intermediaries, in addition to holding government officials accountable.

Second, CBOs represent a long-term investment. Field coordinators must visit regularly for months before earning the community’s trust, and building a durable organisation takes much longer. Government agencies can solidify CBO institutionalisation through recognition and fulfilment of obligations. If time, stability, and legitimising signals are provided, CBOs can function at low costs, requiring little more than the field coordinators’ salaries.

Finally, community-based initiatives may be a complement to but are certainly not a substitute for good legislation. We recommend passing the Right to Homestead Bill, 2014, a bill ensures a minimum quantity of homestead land, along with a variety of mechanisms for rights protection. With progress on both the enactment and implementation fronts, we expect service delivery and rights protection to improve significantly.