Riding the energy transition: Oil beyond 2040 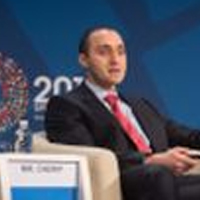 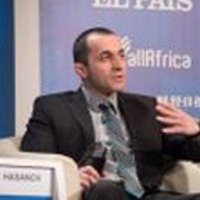 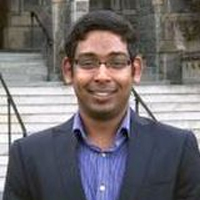 The motor vehicle was very quick to replace horses in the early 20th century, and the advent of the electric car suggests that another profound shift in transportation and energy could be around the corner. This column projects how different rates of electric car adoption will affect oil demand and consumption over the next three decades. In a fast-adoption scenario, oil prices could converge to the level of current coal prices by the early 2040s. Even under a slow-adoption scenario, oil could become obsolete before it is depleted.

The imminent demise of oil as the world’s main energy source has been widely heralded since at least the 1950s, most famously by M King Hubbert in his ‘peak oil’ hypothesis (Hubbert 1956). Progress in oil extraction and continuing discoveries of new reserves, however, have brought this idea into question. In fact, as noted by Sheikh Zaki Yamani, a former Saudi Arabian oil minister, “The stone age came to an end not for a lack of stones, and the oil age will end, but not for a lack of oil.” In other words, a demand-driven abandonment of oil would not be unprecedented − after all, wood and coal use in the 19th and 20th centuries did not diminish due to resource scarcity. Indeed, the US energy and fuel mix went through two dramatic transitions within a century (Figure 1). Coal toppled wood between 1850 and 1895, and oil and gas replaced coal between 1910 and 1955. The renewable energy, just like oil in 1905, made up 5% of the total primary energy use in 2015. 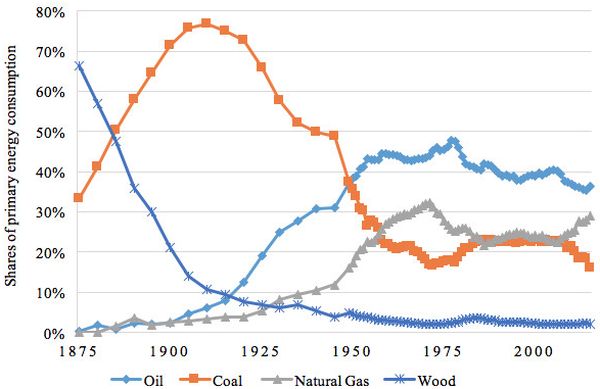 In a new paper, we use the horse-car transition pattern a century ago to forecast the motor vehicle displacement today (Cherif et al. 2017). If the motor vehicle displacement follows the same pattern as horse displacement in early 1900s – that is, a fast-adoption scenario – we project that within a decade, by late 2020s, motor vehicles per 1,000 people would decline by 30% in the US, followed by another 90% fall over the next 15 years (Figure 2). The share of electric vehicles could reach 30% of the vehicle stock by the late 2020s and about 93% by the early 2040s. In a slow-adoption scenario, based on the growth of motor vehicles in the early 20th century shows a 36% electric vehicle share by the early 2040s. This forecast is closer to others’, such as Bloomberg New Energy Finance, Carbon Tracker and the Grantham Institute at Imperial College London, OPEC (Organization of the Petroleum Exporting Countries), and the International Energy Agency (IEA). Our fast-adoption projection has been consistent with the recent growth of electric vehicles (Figure 2). It is also within the range of estimates of the Bass diffusion model, widely used to predict the rise of new technologies, as well as in line with recent technology adoptions (Figure 3).

Figure 2. Motor vehicles versus horses in the US 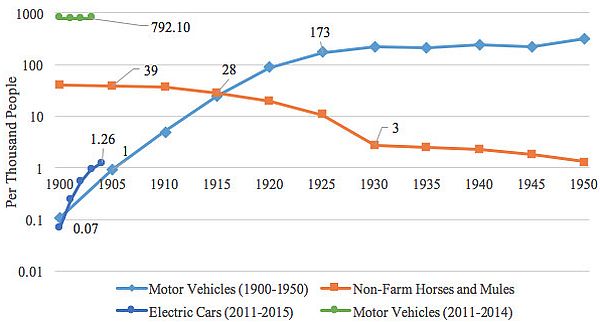 Note: Electric car graph line starts in 2011. Note the log scale on the y-axis. ‘Electric cars’ in this and all other figures include purely electric as well as plug-in hybrid vehicles.
Source: Fisher (1974) for horse data; US Federal Highway Administration, various years; and OECD/IEA (2016). 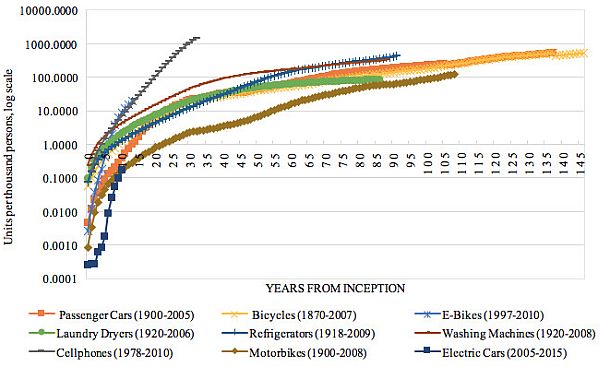 In many ways, the scepticism towards the potential adoption of electric vehicles is reminiscent of the early days of the cell phone market. In the early 1980s, McKinsey produced a report for AT&T on the potential world cell phone market. The report identified big hurdles to the adoption of cell phones such as bulkiness of the handsets, short duration of the battery charge, high cost per minute, and lack of coverage. The report predicted a market of 900,000 cell phones by 2000 (The Economist, 1999). The actual number turned out to be 120 times larger than forecast at 109 million phones (Seba 2016).

Similar obstacles – such as high cost, lack of infrastructure, and short range – face early adopters of electric vehicles. Yet these hurdles are disappearing, lending support to the projected rise of electric vehicles. In particular, the announced price of Tesla’s Model 3 at US$35,000 is about the average price of a new car sold in the US in 2015 (NADA (National Automobile Dealers Association), 2015). More important, it is at the threshold price, in terms of affordability, of the Ford Model T, at which motor vehicle adoption started accelerating rapidly in early 20th century (Figure 4).2

Note: To make a relevant comparison of affordability across time, Model T’s prices are deflated using nominal GDP (gross domestic product) per capita (base of 2015). 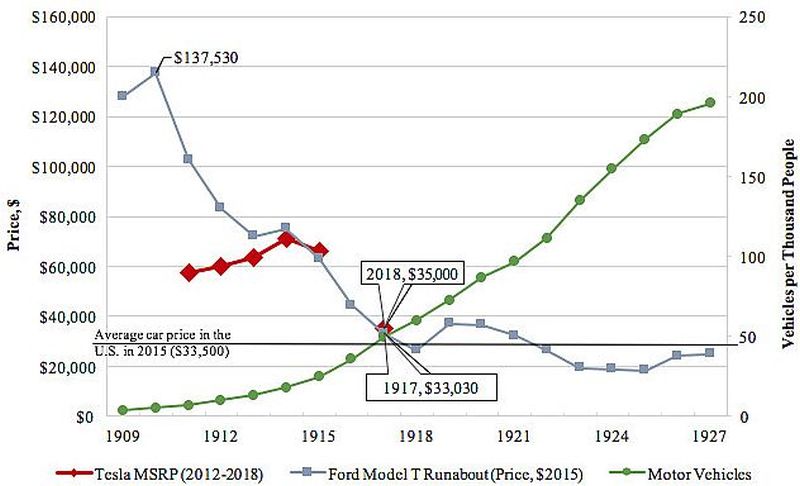 Looking at the price and shares of oil and coal over about the past 150 years, we can see two striking features (Figure 5). At no point in history was the price of oil cheaper than the price of coal in terms of heat content per dollar − and yet, a major transition took place. Secondly, despite the substantial shift in energy use away from coal, the value of heat provided by coal (a barrel of oil equivalent, approximately 6 million BTU) has fluctuated narrowly at about US$10-15 for a century and a half. 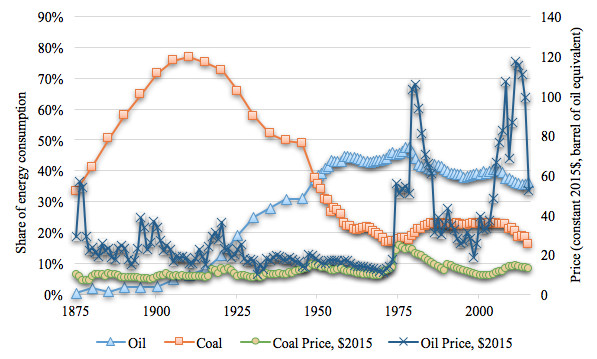 What are the implications of a revolution in transportation and renewables for oil? In the fast-adoption scenario, by the early 2040s, the implied total drop in oil demand is substantial, about 28 million barrels a day; but this is much lower in the slow-adoption scenario – only about one million barrels a day (Figure 6). In our estimation we argue that the forecasted substantial drop in OECD (Organisation for Economic Co-operation and Development) oil demand might not be compensated by an increase in demand coming from emerging markets as predicted by others (for example, IEA and OPEC). It is less likely that emerging markets would keep a 25-year-old transportation technology; high growth in oil demand implicitly implies high economic growth and catching up in terms of living standards, in particular in India and China. Moreover, relatively cheap oil is no guarantee for the continuous use of motor vehicles. Indeed, coal is still available and relatively cheap; yet steam boats and steam trains disappeared completely from most economies many decades ago, irrespective of their income status. 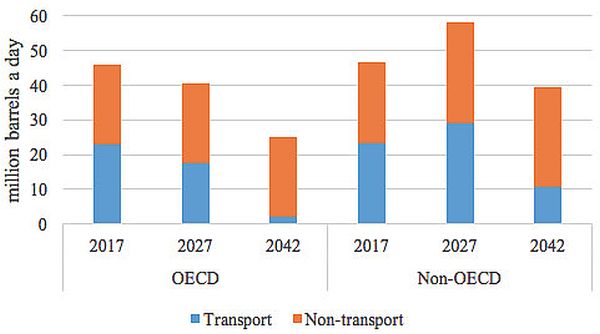 As oil could lose its role as the main fuel for transportation and would compete as a close substitute with natural gas, coal, nuclear, and renewable energy, oil prices would eventually drop substantially and could converge to a level around US$15 per barrel in 2015 prices – the current price of coal and natural gas (Figure 7). In the fast-adoption scenario, we project that this could happen by the early 2040s, and in the slow-adoption scenario, it may take another 10 to 20 years.

Figure 7. Convergence of energy prices in the US 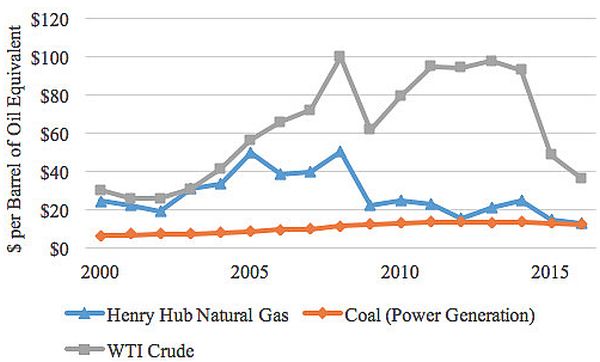 In a world of very low oil prices, the economic model of many oil-exporting nations would not be sustainable. To prepare for such a future, diversification away from oil should be the most crucial policy item on policymakers’ agenda in oil-exporting economies (Cherif et al. 2016).

A transition to electric vehicles would also disrupt the auto industry, both in production and maintenance, with much shorter value chains and more reliable vehicles.Eventually tens of thousands of jobs in advanced and emerging markets could see a transition into new sectors: power charging networks, battery production, and autonomous driving among others.

Perhaps the most important implication of our scenarios is that, under the fast-adoption one, the pace at which electric vehicles would replace motor vehicles would meet the conditions to keep global temperature rise below 2°C. There is a strong rationale for coordinated government interventions to make this transition in transportation even faster, to help mitigate the effects of climate change.

Today, a large-scale and rapid energy transition in the next 10 to 25 years may seem unlikely, but as the renowned futurist James Dator remarked, “decision-makers, and the general public, if they wish useful information about the future, should expect it to be unconventional and even shocking, offensive, and seemingly ridiculous…” (Slaughter 1996). As we have observed, coal did not disappear after 1960. However, it did become much less economically and geopolitically relevant. The same fate might await oil, and ours could be the last age of oil, in which oil would become the new coal.

Authors’ note: The views expressed herein are those of the authors and should not be attributed to the International Monetary Fund (IMF), its Executive Board, or its management.