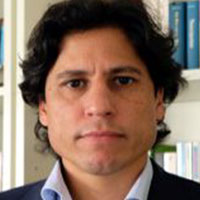 In this article, Sher Singh Verick, Deputy Director, ILO’s Decent Work Team for South Asia and Country Office for India, shows how India compares with other countries in Asia as well as with other developing regions in the world, in terms of the level and trend of female labour force participation.

Female labour force participation in India has been historically low, particularly in the North, where social norms have placed a constraint on how and where women can work. In this context, one of the most puzzling labour market trends in India has been the further decline in the female labour force participation rate (LFPR), particularly during the last 15 years, which was a period of strong economic growth. Looking at the all-India level, LFPR for women aged 15 and above stood at 42.7% in 2004-05, according to Usual Principal Subsidiary Status (UPSS) definition1. By 2009-10, the rate had fallen dramatically to 32.6%, and it continued to decline to 31.2% in 2011-12. More recent data from the Labour Bureau indicates that women’s LFPR stood at just 31.1% in 2013-14, before falling to 27.4% in 2015-16.

In recent years, there has been considerable debate on the various explanations for this puzzling trend. Most studies, including Dasgupta and Verick (2016), focus on four key drivers of the decline: firstly, increased enrolment in secondary schooling; secondly, rising household incomes, which pulled women out of the drudgery of agricultural labour; thirdly, mismeasurement of women’s participation in the labour force; and finally, the lack of employment opportunities for women in the non-farm sector. Based on small-sample primary surveys, there is also some evidence that the mechanisation of agriculture has contributed to the decline in demand for female agricultural labour.

As noted above, increased enrolment in secondary school is a factor behind the decline in LFPR, though it hasn’t been the main driver since the fall is also evident among prime-age women. At the same time, educational attainment is a key determinant of labour market outcomes – this is reflected in both the differences in female LFPR across education categories and the types of jobs women can access. Firstly, there is a U-shaped relationship in India between female labour force participation and education, with the lowest participation rates experienced by women with secondary schooling (Kapsos et al. 2016). Only for those who complete tertiary education do participation rates increase. Secondly, as the level of education goes up, so does the likelihood a woman can find better quality employment (a global phenomenon!). As shown by Chaudhary and Verick (2014), Indian women with a graduate education have a 30% higher chance of being in regular salaried work in rural areas, and 20% higher probability in the case of urban areas (compared to illiterate women).

Overall, while Indian women have withdrawn from traditional roles in agriculture, there have been insufficient job opportunities for women in fast-growing sectors, which has been the case in other Asian countries, including Bangladesh. That said, women are entering the labour force in larger numbers in some states, such as Tamil Nadu, where the garment industry has become a large employer of women workers.

In some ways, it has been hard for many commentators to accept that India’s female LFPR has been falling – some have suggested that it is largely an issue of measurement. The argument goes that women’s work is mismeasured – indeed, since many women are unpaid family workers, their status is misclassified and recorded as domestic duties. However, as outlined in Dasgupta and Verick (2016), mismeasurement is less likely in the context of an external workplace such as factory or office. There should be little doubt that the number of women in India working outside the home is low in comparison to other countries, say in East and South-East Asia.

India is, in fact, not unique in its experience of low and declining LFPR of women. The female LFPR in Turkey fell from 36.1% in 1989 to 23.3% in 2005. This has been explained by the process of urbanisation and structural transformation: as households moved to urban areas and husbands shifted out of agriculture, women withdrew from the labour force (reflecting an increased engagement in domestic duties) (World Bank, 2009). Female LFPR in Turkey only started to increase in 2009 – as of 2013, it had reached 30.8% (ILOSTAT database).

Asia vs. other developing regions

Overall, female LFPR is lower in South Asia than other parts of Asia (Figure 1). On average, female LFPR in South Asia stood at just 28.3% in 2015, while it reached 61.8% in East Asia and 58.8% in South-East Asia. That said, it should also be noted that the rate has not only fallen in South Asia, from 34.8% in 1995, but also in East Asia (from 69.1% in 1995). However, in South-East Asia, women’s participation remained stable at around 58%. While these aggregate trends mask differences across countries, they are significant in that they set the region apart from the rest of the world. In all other developing regions, women’s LFPR has increased since the 1990s. Even the Arab states, with the lowest level of female LFPR, witnessed an increase from 17.2% in 1995 to 21.1% in 2015 (Dasgupta and Verick 2016).

All countries in South Asia, apart from Nepal, have low female LFPR. But, in recent years, there are different trends and divergence in some cases (Figure 2) (see also Dasgupta and Verick 2016). In contrast to the predictions of the U-shaped hypothesis2, which relates female LFPR to the level of economic development, there has been an increase in the LFPR in Bangladesh. A low-income country, Bangladesh has witnessed a substantial increase in female employment in labour-intensive export-oriented industries in urban areas. At the same time, the rapid expansion of microfinance in rural areas has supported women’s employment in poultry and livestock. Another puzzle emerging from South Asia is that, despite significant progress in human development over many decades and the more recent positive economic trends, female LFPR in Sri Lanka has remained stagnant, which is linked to educational attainment, access to jobs, and the child and elderly care burden. In contrast to the other countries in South Asia, Nepal has a very high female LFPR, even by global standards, which reflects both differences in the opportunities women have to work (along with the pressure imposed by the migration of spouses) and measurement.

Looking to other parts of Asia, far higher rates of female LFPR are evident (Dasgupta and Verick 2016). In Cambodia, the female LFPR increased to 84.8% in 2011 from 77.5% in 2004, which is one of the highest rates witnessed anywhere in the world. In Indonesia, LFPR is lower but still far higher than in South Asia (48.9% in 2015). In the last three decades, China has experienced an unprecedented period of economic growth; however, this was also accompanied by increasing gender gaps in some labour market indicators. Although women’s LFPR in China is relatively high (above 60%), both women’s LFPR and employment-to-population ratio have declined at a faster rate than men’s. Women are also more likely to be engaged in low-productivity sectors. 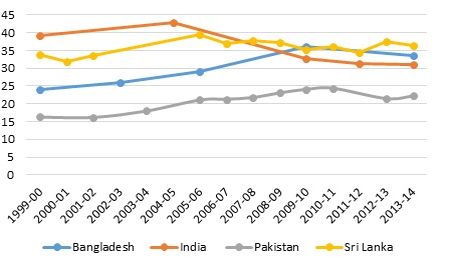 Source: Author’s calculations based on national sources for the respective countries.

What needs to be done to increase female labour force participation?

The goal should not be to increase female LFPR at any cost, but to increase good work opportunities for women, and their freedom to choose to work outside the home and access decent and productive employment. Due to the complexity of the factors driving female labour force participation, no single policy measure can be proposed to improve labour market outcomes for women in India and across Asia.

Overall, six policy pillars can be considered, particularly in the Indian context: 1) inclusive growth and job creation; 2) education and skills development; 3) support for reducing the time burden; 4) transport and infrastructure; 5) legal rights and protection; and 6) measurement.