India’s trading partners often complain about the restrictiveness of India’s trade regime. This column argues that they are both right and wrong. While India´s economy is ‘closed’ in terms of trade policy, it is ‘open’ in terms of trade outcomes. Tariff barriers in the services sector are among the highest in the world; but given its size, India trades more than a typical country does.

Is India an open or closed economy? More than 20 years after the repudiation of the licence quota raj model by the Narasimha Rao-Manmohan Singh reforms initiated in 1991, the answer to that question should be clear. But apparently not. The answer depends upon whether ‘openness’ is measured by trade policy or by actual trade outcomes. Consider each.

How restrictive are India´s trade policy barriers? Figure 1 depicts the evolution in India´s tariff barriers (which are easier to measure than non-tariff ones). Tariffs were stratospherically high - in absolute terms and relative to the rest of the world - prior to 1991 but have declined dramatically. They are close to 10% today and have almost converged with tariffs in the rest of the world. 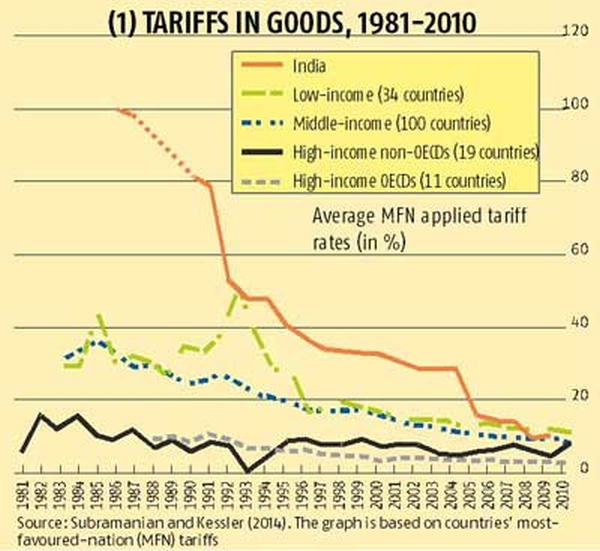 In contrast, barriers are very high (both in absolute terms and relative to other countries) in services. Figure 2, from World Bank researchers (Borchert, Gootiz and Mattoo 2012), provides a sense of magnitudes. It plots a country´s services barriers (on a scale of 0 to 100 on the vertical axis, with a higher number depicting greater restrictiveness) against its level of development (on the horizontal axis). The downward sloping line suggests that, on average, barriers tend to be greater in poorer countries.

Figure 2. Barriers in services and level of development 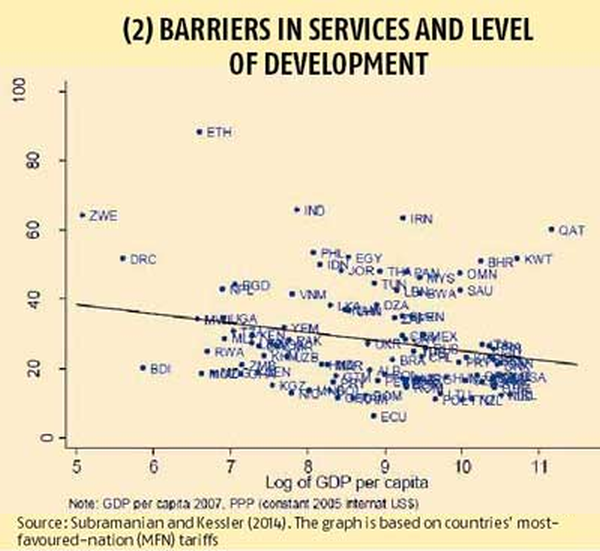 The key points are that: first, India´s overall barriers in services (denoted by the "IND" symbol) are among the highest in the world (surpassed only by Zimbabwe) and nearly 4-5 times greater than those in Organisation for Economic Co-operation and Development (OECD) countries; and, second, they are also very high for India´s level of development because India is well above the line.

The usual caveats, that all such measurements are incomplete (because they do not fully capture regulatory barriers) and imperfect, should not be overlooked. Subject to them, however, the conclusion is that compared to the rest of the world, India´s manufacturing sector faces modest levels of protection, and the services sector faces extremely high levels of protection, resulting in an overall trade regime that is quite protectionist.

But the picture of India changes quite dramatically when the country´s trade regime is judged in terms of trade outcomes. A standard measure of trade outcomes is a country´s trade (exports plus imports) expressed as a share of its Gross Domestic Product (the trade-to-GDP ratio). Figure 3 depicts the evolution in India´s trade-to-GDP ratio over the last two decades. This ratio doubled over the course of a decade from about 25 to 53% in 2012; the recovery from the global financial crisis in 2008 was also swift. It is worth noting that the surge in India´s openness coincides with the period of rapid growth in the 2000s. 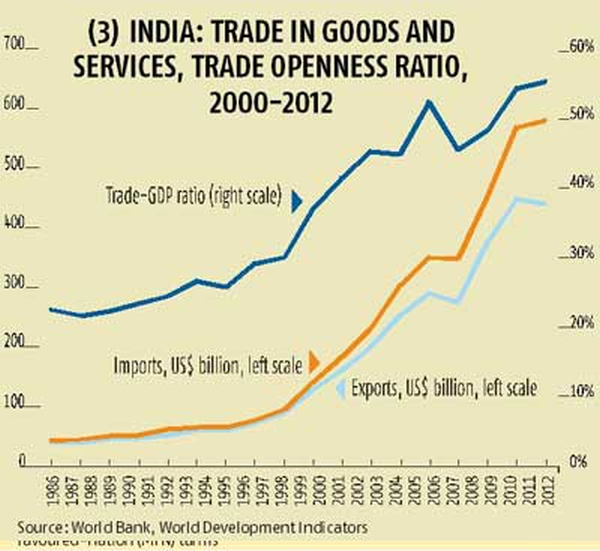 But is this 53% a small or large number compared with other countries? A geography-based view of trade highlights an overlooked fact, namely that large countries tend to trade less than small countries. Being large makes the cost of trading with the outside world relative to trading within the country very high. The opposite is true for small countries: lacking an internal market, their costs of trading with the world are relatively small and hence they tend to have higher trade-to-GDP ratios.

Figure 4 plots, for a number of countries, their overall trade-to-GDP ratio (on the vertical axis) against their size (measured in terms of land or area on the horizontal axis). The line shows the average relationship between trade outcomes and country size. That line is downward-sloping, confirming the geography-based intuition that large countries trade less. For example, the large countries such as China, India, Brazil, the United States and Japan are all in the lower right-hand corner with low trade (below 50-55%) ratios. 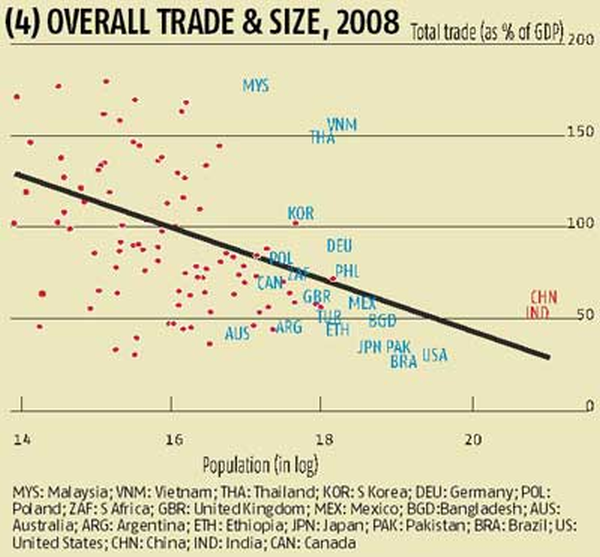 But in a comparative sense, what is interesting is that India is above the line, indicating that for its size, it trades more than the typical country does. Comparisons based on trade in goods indicate that India is a normal trader. But comparisons based on overall trade (goods and services) shown in Figure 4, indicate that India is an over-trader, sometimes significantly so. A more formal (but simple) regression analysis confirms that India´s overall trade is about 25% greater than it should be for a country of its size and economic development.

Unsurprisingly, countries such as China, and especially Malaysia, Thailand, Korea and Germany, are large traders (they are well above the line in Figure 4). It is countries such as Brazil, Japan and the US (well below the line) that are unusually low traders given their size.

‘Everything and its opposite is true about India’

So, when India´s trading partners complain about the restrictiveness of the country´s trade regime, they are both right and wrong. It is closed in trade policy terms but open in terms of trade outcomes. Joan Robinson probably had some lofty, metaphysical conception when she observed that everything and its opposite are true about India. That observation applies more mundanely to India´s trade regime too.