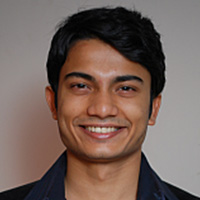 Why is northern India experiencing faster urban growth but slower urbanisation relative to the South? This column addresses this question by highlighting the interconnection between the demographic transition and urban processes in India.

The Economic Survey of 2016-17 begins its chapter on ‘The Other Indias’ with a quote from Arvind Adiga’s novel: “India is two countries…Every place on the map of India near the ocean is well-off. But the river brings darkness to India.” This quote echoes what social scientists have known for at least two decades – the economic and demographic divide between peninsular India extending southwards, and the northern hinterland states of Rajasthan, Uttar Pradesh, Bihar, Madhya Pradesh, Jharkhand, and Chhattisgarh. In the South, per capita incomes and fertility rates are higher and lower respectively, than in the North. There is, however, an additional aspect of this regional difference that manifests itself in the pace of urban growth and urbanisation. The population of towns and cities in northern India is growing faster than in the South. Yet the pace of urbanisation, or the rise in the share of population living in urban areas, has been extremely slow in the North relative to the South. My recent IGC (International Growth Centre) study on urban dynamics in India since 1870 till date, using Census and other data sources, provides some clues towards addressing this paradox (Tumbe 2016).

Another explanation on the slow pace of Indian urbanisation focusses on low levels of spatial mobility. Census statistics on in-migration show low rates of mobility especially for non-marriage related reasons. However, as documented in Chapter 12 of the Economic Survey 2016-17, alternative estimates of migration reveal magnitudes of a much higher order such that at least 20% of the workforce can be considered to be migrant in nature.

Definition and migration-based explanations have overlooked another potential reason for India’s relatively slow pace of urbanisation. This is related with the fact that urbanisation also depends on rural-urban differences in natural growth rates which correspond to their respective demographic transitions. 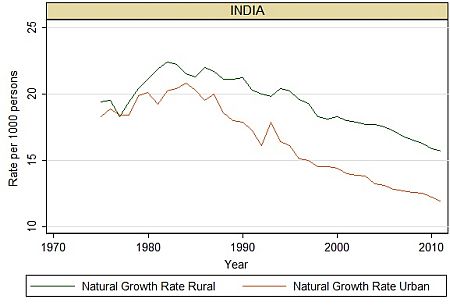 A district-level analysis reveals that low rural literacy levels, and more importantly, low levels of agricultural productivity, are strongly associated with larger rural-urban fertility differentials and consequently larger rural-urban natural growth rate differentials. Agricultural productivity is negatively related with rural-urban fertility differentials even in a sub-sample of nearly 100 districts within the southern states, giving additional validity to the empirical results. I interpret these results as an income effect on fertility reduction whereby regions with stagnant agricultural productivity witness lower fertility reduction in rural areas relative to urban areas. Simulation analysis reveals that closing the rural-urban divide between natural growth rates would lead to an increase in urbanisation rates by over 4 percentage points, without any change in urban definition. This would explain nearly 50% of the observed gap between India’s official rate of urbanisation and that predicted at its level of income.

The rural-urban demographic divergence explains not only India’s slow pace of urbanisation but also why northern states have been urbanising slowly compared to the South. Yet, as Figure 2 shows, the levels of urban natural growth rates are substantially higher in the northern hinterland states than elsewhere. Since natural growth rates account for nearly 50% of overall urban growth rates, towns and cities in northern states are growing faster than those in the south, even as overall city-level population growth rates are falling on account of fertility reduction (Figure 3). The North-South urban paradox occurs because northern states have higher fertility rates in urban areas than in the South and also because they exhibit higher fertility rates in rural areas relative to urban areas. In simple words, northern towns and cities are growing faster but so are the villages! 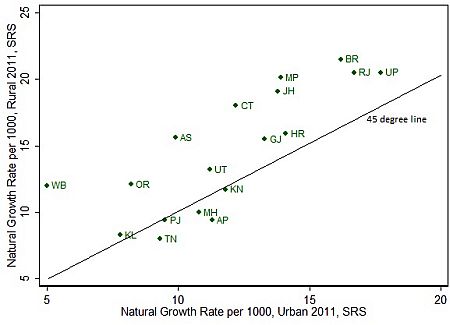 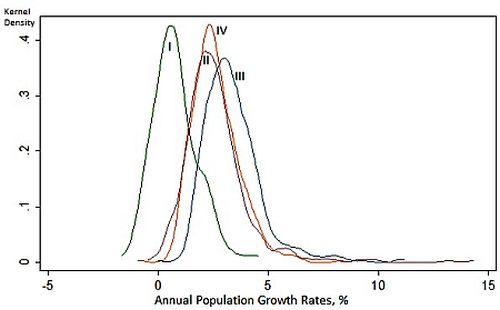 Implications of the North-South urban paradox

The North-South urban paradox has three important implications. First, unless agricultural productivity is boosted substantially in the northern hinterland states, the rural-urban demographic divergence will continue to stall the pace of urbanisation in India, especially in the northern hinterland states. Rural prosperity is thus demographically linked to the process of urbanisation. Second, in the next two decades, the bulk of urban population growth will occur in the northern states on account of higher fertility rates. Urban planning and infrastructure development projects and allocation of central government funds will need to take this demographic reality into account. Finally, fertility reduction is occurring at a rapid pace along the distribution of cities whereas migration tends to be disproportionately channelled towards the larger cities. As a result, city population growth rates will fall substantially for most towns and cities with important implications for city-level labour and housing markets and public finances.