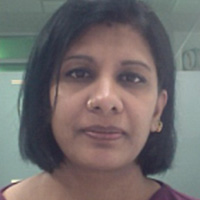 Some proponents of universal basic income (UBI) for India believe that the unconditional cash transfer should replace existing welfare programmes. Based on analysis of National Sample Survey data, this article presents speculative evidence on the potential nutrition-enhancing role of UBI vis-à-vis that of in-kind transfers via the public distribution system and midday meal scheme.

The idea of direct and unconditional cash transfers, of which universal basic income (UBI) is the best example, has been gathering support in recent years. UBI is a rare example of an idea that has support from both sides of the political divide and, at the same time, has dissenters that cross that divide as well. The idea of UBI originated in the developed country context with Europe’s first trials of the UBI taking place in Finland from January 2017 and with very encouraging results. Recently, the idea has found favour in India with a group of leading economists, including successive Chief Economic Advisers (CEA) to the Government of India, writing and speaking in support of cash transfers and UBI. For example, the current CEA, Arvind Subramanian even predicted in January 2018 that UBI will become operational in two Indian states within two years. In a speech in Kolkata in 2012, the then Chief Economist of the World Bank, Kaushik Basu, described direct cash transfers as a ‘game changer’ and spoke strongly in favour of the idea. Pranab Bardhan in an op-ed piece noted two years back that “so far, the conversation has focused largely on the advanced countries, even though such programs may actually be more feasible – and more desirable – in the developing world”. UBI received official recognition as a possible action plan when it featured in the Economic Survey of India, 2016-17.

UBI is a very attractive idea since it allows the household to spend the money as it desires rather than as dictated by the State; it is easy to administer since the cash is directly transferred to the recipient’s bank account; and it avoids leakages and is not prone to corruption unlike the Public Distribution System (PDS). There have been some suggested modifications to the idea of a UBI. Debraj Ray suggests that UBI should be modified to UBS (universal basic share) with each recipient getting a fixed share of the gross domestic product (GDP). It is not clear, however, how that share will be determined and the suggestion has the unattractive feature that at times of contraction of the economy, the UBI will decline just when the poor need protection. Basu, in the speech in referred to above, suggested that the transferred to the woman in the household – following experiment – though there is nothing to ensure that the money will not be passed on to the male head in the household.

There is very little evidence on the UBI in India and that makes the increasing support for it difficult to understand. The only experiment with the UBI idea in India was carried out as a randomised controlled trial (RCT) in a 2011-12 pilot project in eight villages in Madhya Pradesh, which shows favourable results. The results include the following observations: “Many used to improve their housing, latrines, walls and roofs, and to take precautions against malaria… Nutrition was improved, particularly in scheduled caste (SC) and scheduled tribe (ST) households. Perhaps the most important finding was the significant improvement in the average weight-for-age of young children (World Health Organization z-score), and more so among girls”. It is doubtful if RCT is appropriate for evaluating the effectiveness of UBI since one needs to allow a simultaneous contraction of the subsidised welfare programmes, such as the PDS and Mid-day Meals Scheme (MDMS) to pay for the UBI. It is therefore misleading to assess UBI by studying the effect of cash transfer in isolation from what happens to in-kind transfers – as the experimental project in Madhya Pradesh has done.

In this article, we provide speculative evidence from the 68th round of the National Sample Survey (NSS) (2011-12) on the effectiveness of the UBI in calorie intake in India. According to the Food and Agricultural Organization (FAO), India is one of the most calorie-poor countries in the world and ranked 126 on average per capita calorie intake in a list of 172 countries. India has consistently recorded a very high rate of prevalence of undernourishment (POU), which has not declined despite fall in poverty rates. In our study, we have used a daily per capita intake of 2,400 kcals in rural areas and 2,100 kcals in urban areas as the cut-off for defining undernourishment. Using calorie conversion factors on Indian foods, we calculated the per capita calorie intake of every household and in each of the major states, and from them the average POU rates. Ideally, we would have preferred to examine the effect of income increase of the poor via UBI on anthropometric outcomes but, unfortunately, the NSS data does not contain anthropometric indicators while the National Family Health Survey (NFHS), 2015-16 data, which does contain anthropometric information, contain no information on household income or expenditures. 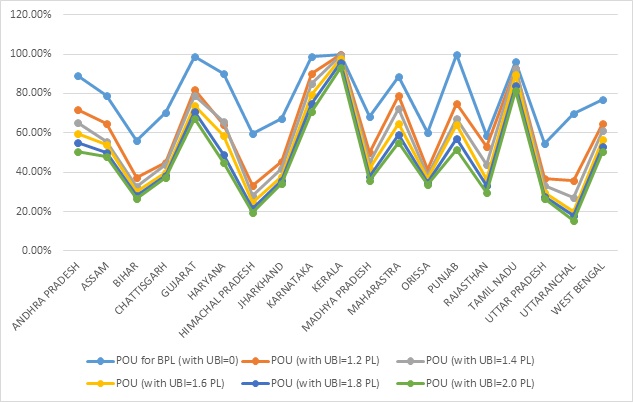 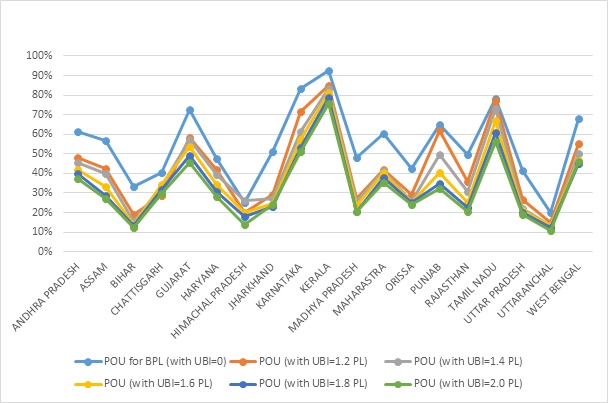 The plots in Figure 1 (rural) and Figure 2 (urban), provide the average POU rates for all households across a range of UBI values, that is, below the poverty line (BPL), between the poverty line (PL) and 20% above the PL, between 20% above PL and 40% above the PL, etc. The idea is to treat these plots as providing evidence of what the average POU rate will be if UBI is set at 1.2 times the PL, 1.4 times the PL, etc. with the highest value recording the POU rates if the UBI is set at twice the PL. There is nothing ‘experimental’ in these numbers since these are based on actual NSS consumption data.

The three key features of these figures are as follows: (a) the rural POU rates are generally greater than the urban and somewhat surprisingly, the rural areas of the southern states of Karnataka, Kerala, and Tamil Nadu record very high rates of POU; (b) the spatial variation in the POU rates across states is much greater in the urban areas than the rural and (c) the UBI secures only a modest decline in the POU rates, especially in the rural areas where a UBI that is set at twice the PL still leaves one in two households undernourished. The effect of UBI is larger in the urban areas but even here, with a UBI of this magnitude, one in three households still remains undernourished. The UBI generally does better in the urban areas.

This discussion is summarised in Figure 3, which plots the relationship at the level of all states, between POU and UBI. To secure a POU rate that is ‘acceptable’ at around 25% in urban areas, one requires UBI that is set at four times the PL, and much more than that in the rural areas. Note, incidentally, that the numbers in Figures 1 and 2 of the POU decline with UBI increase since they do not factor in the nutrient intake declines as the PDS and MDMS have to be curtailed, if not disbanded altogether, to make room for the increasing UBI.

Figure 3. Prevalence of undernourishment for categories of UBI 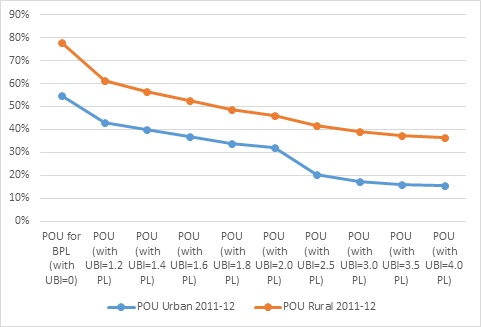 This raises the question: how calorie enhancing are MDMS) and PDS? Tables 1 (rural) and 2 (urban) contain evidence on this from the NSS 68th round, as it contains information on the participation or otherwise of every household in either welfare programme. PDS is more effective in enhancing the calorie intake in the urban areas, while MDMS is more effective in the rural areas. This result is perhaps not unexpected since a much greater percentage of children go to private schools in urban areas where MDMS is not operational. The effectiveness of MDMS in rural areas is consistent with evidence, for example, from Young Lives data This result complements the result on UBI in Figure 1 and 2, which showed that UBI is more calorie-enhancing in urban areas. If UBI is to be introduced, then it should be initially implemented in urban areas and extended to the rural areas later.

Table 1. Prevalence of undernourishment among BPL households with and without in-kind transfers, rural (all figures in %)

Table 2. Prevalence of undernourishment among households with and without in-kind transfers, urban (all figures in %)

In this article, we examine the effectiveness of UBI as a nutrient-enhancing measure in India and present evidence based on NSS data. The results show that the UBI has to be quite large for it to be effective in reducing the rate of undernourishment to acceptable levels. To obtain resources to fund such a UBI, one needs to curtail existing welfare schemes such as PDS and MDMS, which are playing an effective role in providing food security. We, thus, argue that the time has not yet come for implementing the UBI in India.

The purpose of this article is not to argue against the introduction of UBI in India, which has considerable but to warn against the danger of looking at UBI in isolation from the other welfare programmes that currently exist.

Several commentators have also noted this and some have suggested that UBI should be paid for by dismantling the ‘regressive subsidy programmes’, such as fertiliser and LPG (liquefied petroleum gas) subsidies that cost much more than the ‘progressive subsidy programmes’, such as the PDS and MDMS. However, that requires political will that is not evident in the track record of successive governments. Clearly, more exploratory research has to be undertaken on UBI before it is introduced.

The tale and maths of universal basic income