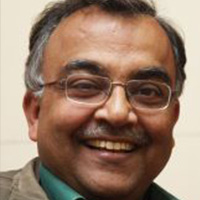 Amarjeet Sinha is currently posted as Principal Secretary, Department of Social Welfare, Government of Bihar. He has over 30 years of experience in government, largely in the social sector. He has had the unique distinction of having played a major role in designing Sarva Shiksha Abhiyan (India’s main programme for universal elementary education) and the National Rural Health Mission. He has also been training Indian Administrative Service Officer Trainees at the Lal Bahadur Shastri National Academy of Administration, Mussoorie on the social sector over the last one and a half decade.

Amarjeet has published seven books and a large number of articles in publications such as the Lancet, Economic and Political Weekly, Economic Times, The Hindu, The Business Standard, The Hindustan Times, etc. His latest book, “An India for Everyone - A Path to Inclusive Development”, was released by Nobel Laureate Amartya Sen in February 2013.

Amarjeet has also served as the Education/Human Development Adviser with the Department for International Development, Government of United Kingdom, 2001-2005. He has been a field officer in tribal Singhbhum district of Jharkhand and in the extremist affected Jehanabad district of Bihar. He was associated with the design of the Bihar Education Project, the first EFA project after the Jomtien declaration 1990, on Education for All. He has been conferred the Honorary Fellowship of the Indian Public Health Association and is a Member of the International Independent Review Committee of the Global Alliance for Vaccines and Immunization (GAVI). He has carried out many assignments for international agencies like UNICEF, UNDP, DFID, WHO, etc.

Amarjeet was nominated a Member of the High Level Expert Group on Universal Health Coverage and a Member of the Inter Ministerial Group on Malnutrition and ICDS reform. He had also served as the Member Secretary of the Tapas Majumdar Committee for estimating the resource requirement for Universal elementary education, and on a Sub Group on Education Management in the Acharya Ramamurti Education Commission. Amarjeet is an Adjunct Faculty with the Public Health Foundation of India and a Member of the Research Advisory Council of the Azim Premji University and of the Board in the Public Health Foundation of India’s institution at Bhubaneshwar.

A student of St. Stephen’s College, Amarjeet topped the Delhi University, and is a recipient of the National Talent Scholarship, the Rhodes Scholarship, and the Oxford Cambridge Society of India Scholarship.

Education for all: Fixing classroom processes

While India has achieved near universal enrolment in schools, the quality of education is far from satisfactory. There is an urgent need to change classroom processes to ensure that those who go to s...