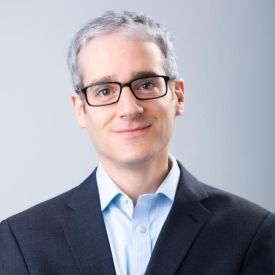 Livestock farmers in India have historically relied on vultures to dispose of dead animals. However, the collapse of vulture populations in India due to accidental poisoning has prevented the scavenging of carcasses, worsening sanitation. In this post, Frank and Sudarshan estimate the consequences of the loss of vultures on public health and estimate that human mortality increased during the period when vultures reached their new collapsed population level, and note that vultures’ role in the ecosystem cannot be easily replicated.

Scientists agree that human activity is causing the loss of animal and plant species at alarmingly high rates, and have designated this as the sixth mass extinction in the history of our planet (Ceballos et al. 2015, Jaureguiberry et al. 2022). It has therefore never been more important to understand how the loss of other species might affect human welfare. In a recent paper (Frank and Sudarshan 2023), we study the functional extinction of vultures in India and find that the disappearance of these birds led to a significant increase in human mortality. In the span of just a few short years during the mid-1990s, vulture populations in India fell by over 95% from a starting point of about fifty million birds (Watson et al. 2004). This is the fastest decline in the population of any bird species in recorded history, and the largest decline since the extinction of the passenger pigeon in the United States. We found that the destruction of vultures raised all-cause human death rates by more than 4% in districts which were once highly suitable for vultures and later lost them. The mechanisms through which these costs occurred are a compelling example of how non-human species provide highly valuable ecosystem services to society.

The role of vultures as environmental sanitisers

All scavengers –but vultures in particular – are considered to be ‘keystone species,’ defined by the National Geographic as species "that hold the [eco]system together."  When a keystone species collapses, the effects on the ecosystem and the societies that depend on them can be large.

In a country with more than 500 million livestock, and without an infrastructure to dispose of dead animals, livestock farmers historically relied on vultures as environmental sanitisers (Subramanian 2014). In their absence, carcasses of dead animals spend time out in the open or are disposed by farmers in water, both of which create an increased risk of disease and water pollution. This carrion also creates a new source of food for dogs and rats, increasing their population. Feral dogs and rats are a major source of rabies infections, a known public health issue in India that is lethal unless treated immediately after exposure (Markandya et al. 2008; Radhakrishnan et al. 2020). Figure 1 summarises these various ecosystem interactions and shows how they connect to public health. 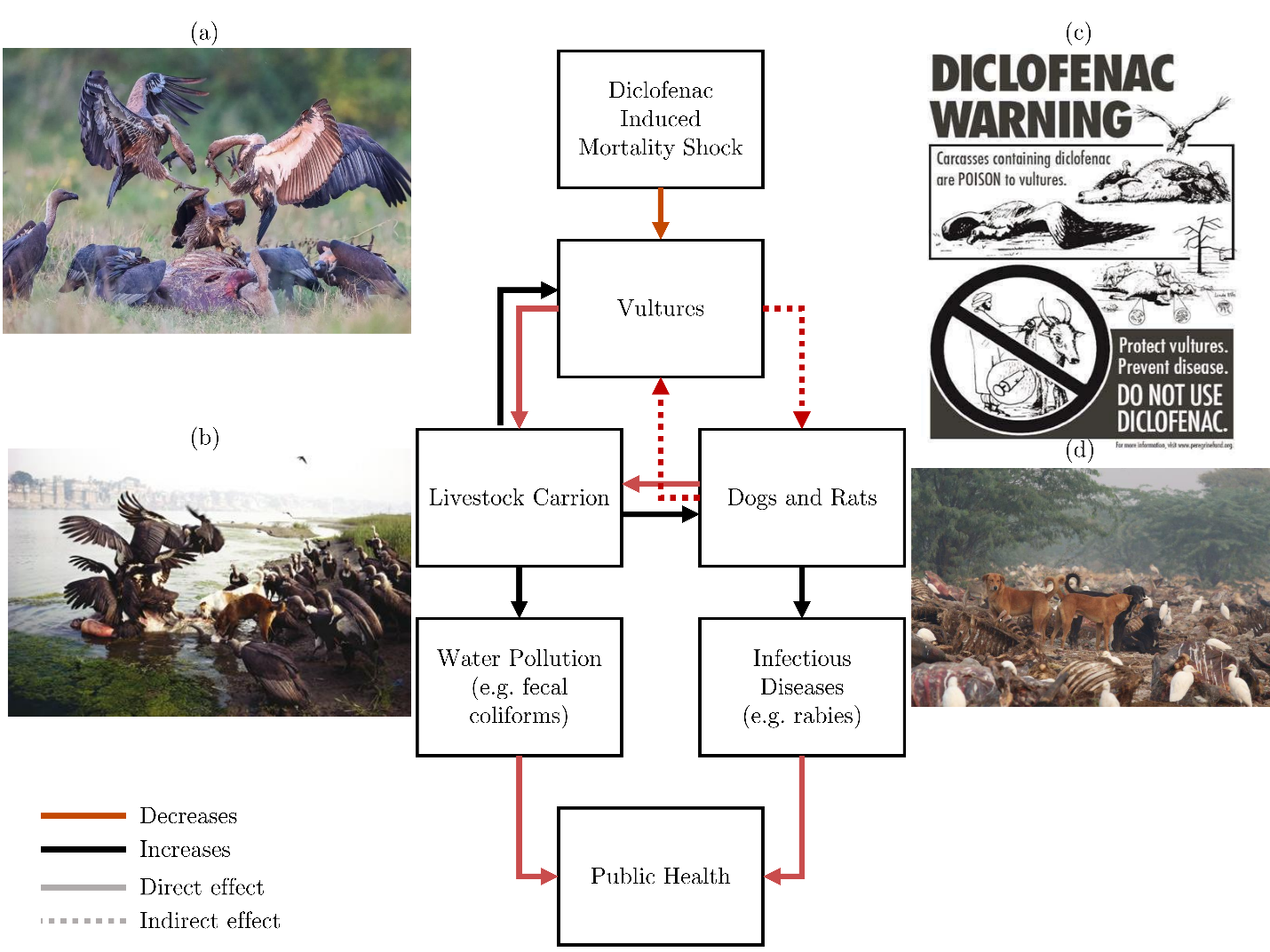 The collapse in India’s vulture population occurred because of unintended poisoning following the availability of cheap, generic versions of diclofenac. Diclofenac was introduced in 1973 as a painkiller for humans, but in the mid-1990s, following approval for a generic version in 1993, the pharmaceutical industry in India started producing large quantities of the drug. This lowered the price to a point that made diclofenac use in livestock economically viable (Subramanian 2014) and by 1994, diclofenac was widely available across veterinary clinics (Cuthbert et al. 2014).

When vultures of the gyps genus consume a carrion with residue of diclofenac they develop kidney failure and die within weeks, a fact that remained unknown until Oaks et al. (2004) provided direct evidence for its effect on vultures. After the veterinary use of diclofenac began in 1994, reports of dead vultures in the wild began accumulating. The first report that led to the wide-scale recognition that vultures are experiencing a mass die-off event was made in 1996, when a field ecologist reported that half of the vulture pairs in a specific study site were dead (Subramanian 2014). Today, the three affected species are listed as critically endangered by the International Union for Conservation of Nature Red List.

Estimating the human health consequences of the vultures’ collapse

The sharp collapse in the vulture population during the mid-1990s offers a natural experiment by which to study the effect on human health. In our analysis, we use data on the habitat suitability of the three affected species of vulture as a proxy for their baseline population levels. We obtain habitat range maps from the global scientific authority on birds, BirdLife International, and classify districts as high or low suitability (see Figure 2 for the results of that classification at stable 1981 district borders). The key insight here is that levels of habitat suitability in a district (measured by habitat overlap) provide a useful indicator for the historical presence of vultures, and thus a means to identify which regions of the country would have been most affected by the poisoning of vultures. 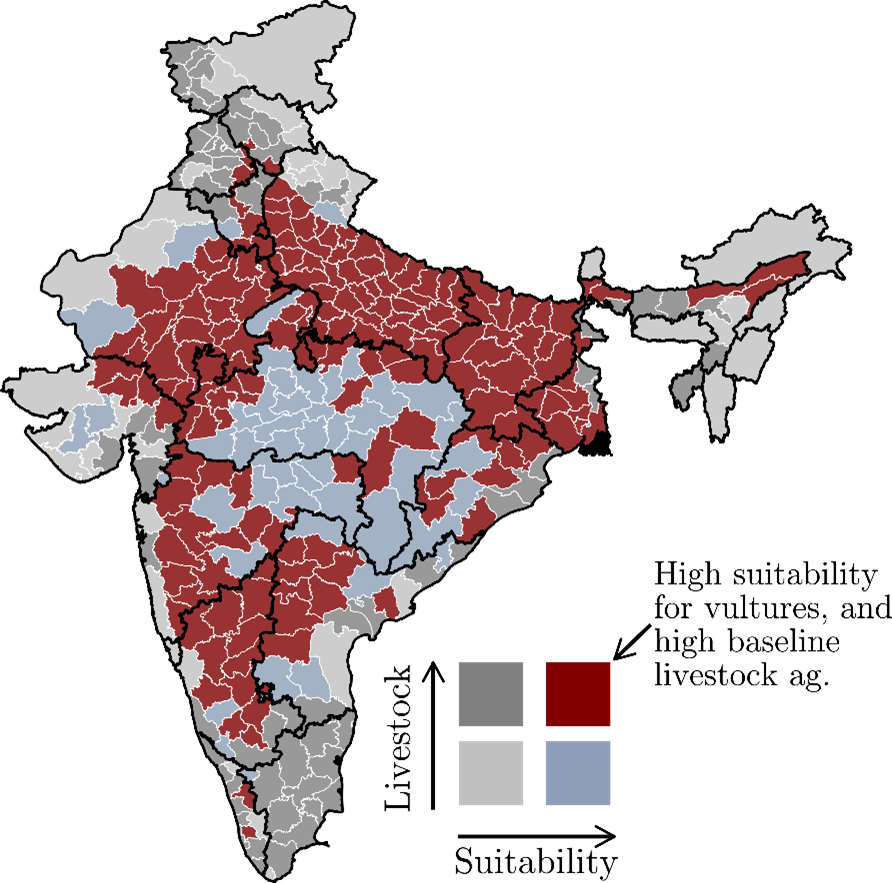 We compare the evolution of all-cause human death rates from the Civil Registration System, before and after the collapse in vulture populations, between the high-suitability and the low-suitability districts. We use the classification of high- and low-suitability to assign districts as having a treated or untreated status, along with the 1994 veterinary availability of diclofenac as the treatment onset.

Following the onset of veterinary diclofenac use in 1994, we see that all-cause human death rates in the high-vulture suitability districts diverged from the low-vulture suitability districts. We do not see differential evolution of human death rates in the years before vultures collapsed. This pattern is visible both in the raw data (Figure 3, panel A), as well as in the estimation results that account for district mean rates and flexible time-trends (Figure 3, panel B). On average, we find that even when controlling for more flexible time trends, we estimate that human mortality increased by more than 4% during the period of 2000 to 2005, when vultures effectively reached their new collapsed population level.

A sanitation shock that leads to the extended presence of animal carcasses in the local environment might intuitively seem rather dangerous for public health. Indeed, our findings imply a large negative impact on human death rates from the collapse in vulture populations. To put things in context, it is instructive to compare with other environmental health risks. Recent estimates suggest that under a business-as-usual climate change scenario, human death rates in 2099 would rise by about 0.60 per 1000, even accounting for adaptation and growth in incomes. Our estimates suggest the impact of losing vultures has been about 80%as large (0.48 per 1000). 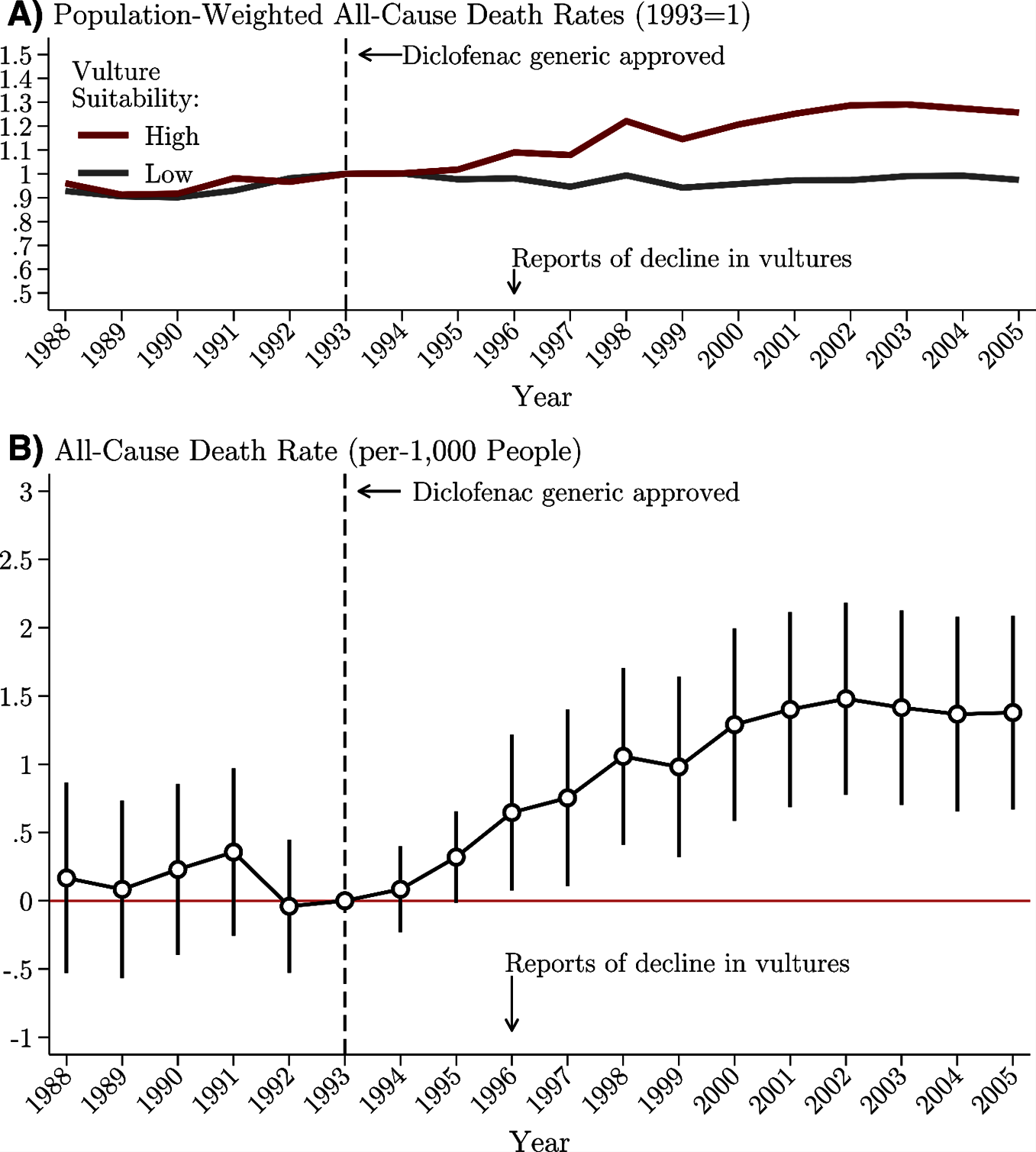 We further validate our interpretation of the results by using data from the livestock census to assign districts as having high or low livestock populations before the collapse. These are the districts that are more likely to have a high flow of carrion to the animal landfills. This demonstrates that the increase in human mortality is driven by the districts that we classify as high livestock at baseline. We also show the effect size is larger for the areas in the districts that are denoted as census-urban, which are more likely to have animal landfills at their outskirts relative to smaller villages (denoted as census-rural).

We conduct three empirical exercises to provide suggestive evidence for the key mechanisms of rabies, feral dogs, and water quality degradation. First, we use national level data on the sale of rabies vaccines – used as the first treatment after an animal bite and potential exposure to rabies – and find sales of the vaccine increased during this period. Second, we use cross-sectional data from 2012 on the first year in which the livestock census reported counts of feral dogs to show a correlation between higher feral dog counts and vulture suitability. Third, we use district-level data on different measurements of water quality that respond to higher levels of rotting flesh around water bodies, and we find that water quality declines, especially for faecal coliforms and dissolved oxygen, which are both important indicators for higher concentrations of pathogens and bacteria.

The social costs of the collapse of vultures in India

Using our main estimate, we find an implied average annual increase of 104,386 deaths due to the decline in vultures in the high-vulture suitability districts. Additionally, we use an India-specific mortality risk reduction value (or value of statistical life) and find the mortality damages to be $69.4 billion a year.

An alternative way to think about the cost of the damages is to examine the substitution costs for vultures. One form of substitution for vultures would seek to replace their environmental sanitation with a network of incinerators that would dispose of the carrion. We scale-up estimates from a previous report (Ishwar et al. 2016), and crudely estimate that operating a network of incinerators would cost $768 million a year. However, this calculation ignores the air pollution damages that would arise from operating incinerators, and the costs to transport the dead animals to the incinerator, since there would be fewer incinerators than animal landfills, requiring moving carrion over larger distances.

The collapse of vultures in India demonstrates that the social costs from losing keystone species can be very high.1 In this setting, introducing new chemicals into the ecosystem led to a significant change in its functioning that had ripple effects on human well-being. Our analysis likely recovers a lower bound estimate for the importance of vultures, as we are limited in terms of data availability when examining effects on morbidity.

Because of the vital role that keystone species play in ecosystems, it might be prudent to consider how changes in regulatory approval and action could affect them. For example, any forecasted evaluation of which keystone species would encounter diclofenac in the event of its approval would have immediately flagged vultures as vulnerable; scientists could have then tested for and identified the potential for large adverse effects.

The inadvertent poisoning of vultures is just one example of how quickly wildlife species can collapse. Many other threats to species exist, such as habitat loss, wildlife trade, invasive species, and more recently, climate change. As environmental conditions shift due to climate change, species will have to adapt or potentially migrate away from their current habitats, yet their roles in the ecosystem may not be replaced by other species, which could have other adverse impacts. For example, climate change is already increasing stress on honeybees, making it harder to recover honeybee population losses that occur over winter. It can also take years to learn about these complicated dynamics, as shown by a recent study using 25 years of data to isolate how climate-induced food shortages caused bats to move into human-dominated habitats, which resulted in zoonotic disease outbreaks (Eby et al. 2022).

This article first appeared on VoxDev.