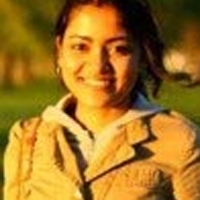 College of William and Mary

It is widely believed that there may have been little or no electoral consequences of India’s demonetisation in 2016. This article analyses voter behaviour following demonetisation. It finds that places with fewer banks were more adversely affected by demonetisation, and that this was associated with fewer votes for the ruling party BJP and its allies. However, there were no impacts in BJP-stronghold areas.

On 8 November 2016, the Indian Prime Minister unexpectedly announced that, starting at midnight, two commonly used denominations of currency notes would cease to be legal tender, with the objective of stemming the flow of counterfeit notes and black money. New currency notes were to be provided in exchange, but with daily limits on withdrawal amounts. The slow printing of notes led to a widespread shortage of cash across the country, leading to reports of economic hardship in the following months.

As Chodorow-Reich et al. (2019) show, demonetisation had real detrimental effects on the economy and credit growth. Yet, our calculations using data collected by the Center for Study of Developing Societies (CSDS), show that 40% of respondents believed that demonetisation was the right move. In the months following the demonetisation policy, the ruling party, Bharatiya Janata Party (BJP) won numerous state and local elections, suggesting that voters did not seek to electorally punish the BJP for the policy.

Looking at aggregate trends in election outcomes, however, may paint a false portrait of voter behaviour. The BJP and its allies’ vote shares had been increasing over time, and it is possible that they would have received an even greater share of the votes if they had not implemented demonetisation. To analyse these arguments in detail, we use a quantitative method that allows us to isolate the causal effects of demonetisation, by using variation in the severity of demonetisation across districts, as described below (Khanna and Mukherjee 2020).

The challenge in estimating causal effects

Since the demonetisation in 2016 had been implemented on the same day throughout the country, it is challenging to isolate the effects of demonetisation from existing political trends. For instance, if we were to simply compare electoral outcomes for the BJP before and after November 2016, we may be simply picking up changes in vote shares that may have occurred even in the absence of such a policy.

We overcome these challenges by exploiting what is often termed by economists as a ‘discontinuity’, which typically refers to a cut-off, or threshold. In particular, we use a discontinuity in the number of bank branches in districts across the country, which arose as a consequence of a bank licensing policy instituted in 2005 by the previous government in power (the Congress), wherein districts below a cut-off (namely, the national average of the number of bank branches per person), were to receive more banks. Thus, if we were to compare districts just below the cut-off, with those just above the cut-off, we would be able to ensure that both groups of districts are very similar, except for the fact that districts below the cut-off now had more bank branches.

As demonetisation necessitated the exchange of old currency notes for new ones, a lack of access to a bank branch would imply that people with lower access would have greater difficulty in acquiring new notes. In this way, the variation around the cut-off in back branch density, created by the 2005 policy, provides us with variation in the severity of demonetisation in a particular district.

At the cut-off, there was about a 50% increase in new bank branches and bank accounts. While the focus of our study is not to look at the economic effects of demonetisation (as was done in Chodorow-Reich et al. 2019), we verify that we see similar effects in the sample of districts used in our analysis. Specifically, we find that areas with fewer banks had a larger fall in nighttime luminosity following demonetisation.

Despite the negative economic consequences, the policy was not particularly unpopular. We use data on voters’ perceptions from surveys conducted by the Centre for the Study of developing Societies (CSDS) in May 2017 across 146 constituencies and nearly 12,000 respondents, and find that on average, 40% of respondents reported that they thought demonetisation was the right move. Only 16% of respondents reported that they thought that it was not the right move, and the remainder felt that it was the right move, but that it could have been better implemented.

Figure 1. Effects of demonetisation on election outcomes and people’s views in districts with lower access to bank branches 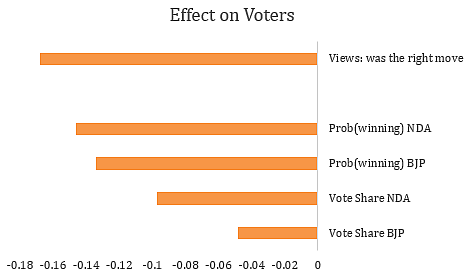 Note: All results are statistically significant at least at the 5% level.

Demonetisation did hurt the BJP and its allies

While recent research has investigated the effects of targeted fiscal transfers on electoral gains (Cole 2019, DeLaO 2013, Manacorda et al. 2011, among others), we know a lot less about the effects of monetary-driven shocks on voter perceptions and electoral outcomes. Using our method for identifying the causal effects of India’s 2016 demonetisation, we find that in areas where the demonetisation was more severe due to poorer access to new currency notes, the ruling party as well as its coalition had significantly lower vote shares, and a lower likelihood of winning elections, than they would have had, in the absence of demonetisation.

Figure 1 shows that districts with more severe demonetisation saw the ruling party having a significantly lower vote share, as well as a much lower likelihood of winning a constituency. This result holds even after accounting for any pre-existing difference that may have been there between the two groups of districts before November 2016.

Our conservative estimates imply that a 10% increase in the number of new bank branches translates into about a 0.9 percentage point increase in the vote share of the population that has access to banking safety nets when faced with such economic shocks.

Figure 2. Effects of demonetisation on election outcomes by political strongholds 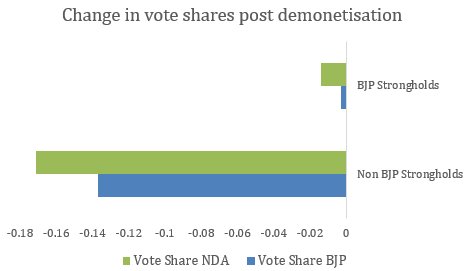 Notes: All results are statistically significant at least at the 5% level. NDA stands for National Democratic Alliance, a coalition of parties led by BJP.

We highlight an additional result in our paper regarding voters in political strongholds. We explore whether and to what extent voters in constituencies that are BJP or its coalition’s strongholds, responded to demonetisation. Citizens have only one vote in an election, despite being concerned about a whole bundle of issues. Yet, there was no referendum or direct democracy on the demonetisation issue. Given the likelihood of ‘issue bundling’, we should expect to see a muted (or no) effect on voting behaviour for those voters whose preferences are strongly aligned with the ruling party overall. Consistent with the literature on issue bundling (Besley and Coate 2008, Iversen and Goplerud 2018) we find that indeed, there were almost no impacts on vote shares for the ruling party and its allies in their political strongholds, as a result of the demonetisation policy.

Interestingly, we also find that voters did not reward the party that implemented the banking expansion (the Congress) in the years preceding demonetisation. This may have been due to the fact that the benefits of the banking scheme were gradual, and to our knowledge, this was not something that had been used during political campaigns, or publicised. In contrast, demonetisation was very salient to anyone residing in India at the time, in addition to which it had also been clear to citizens that it was the ruling party that was responsible for it.