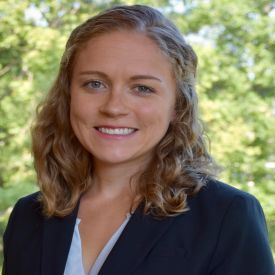 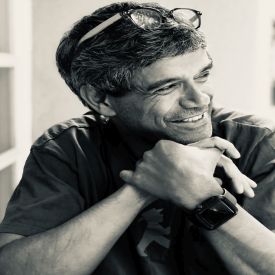 Access to and sustained use of improved household latrines have long been both a challenge as well as a policy priority in India, particularly in rural areas. Recognising the importance of social mechanisms that underlie household sanitation choices, this article utilises experimental public goods games in rural Bihar and Odisha, to examine how social factors, such as gender, influence preferences for improved sanitation.

Investments in health at the household level may be partly motivated by a sense of responsibility towards social peers. Can policies harness this motivation to encourage adoption and use of environmental health technologies such as household latrines? Can research identify and expand the definition of ‘social peers’ to aid policy implementation?

Access to and sustained use of improved household latrines have long been both a challenge as well as a policy priority in India, particularly in rural areas. National policies have succeeded in increasing latrine coverage across rural India (International Institute for Population Sciences, 2017). Yet, recent studies suggest that open defecation remains stubbornly persistent (Orgill-Meyer et al. 2019, Spears and Thorat 2019). What policy evaluations and academic studies agree on, however, is the likely role of social pressures on motivating household decisions to both invest in and use private latrines (Bell and Hueso 2013, Christakis 2015).

Why is collective action relevant to private sanitation choices?

Household sanitation behaviours represent private choices with public consequences. By investing in and using private latrines, households protect themselves from communicable diseases spread through human waste, such as diarrhoeal diseases (UNICEF and WHO, 2015). Latrines may also have non-health benefits to household members such as dignity, privacy, security, and status (Pattanayak et al. 2009). Yet, household members do not internalise all the benefits of investments in improved sanitation. By reducing their own exposure to communicable diseases, latrine-using households create a barrier to the spread of such illnesses (Pattanayak et al., 2018). Further, by switching away from open defecation, latrine-using households decrease the overall burden of faecal material in the public health environment. On the other hand, households that continue to practice open defecation enjoy public health benefits resulting from their neighbours’ investments in improved sanitation.

This scenario of interconnected sanitation behaviour risks – or benefits – was the crux of our experimental game intervention (Figure 1). The public goods-style games commenced with a short sanitation-related training session that focussed on the relationship between a household’s sanitation practices and the local public health environment.

Following the training, groups of 5-7 participants engaged in the game-play rounds, in which they had the opportunity to earn real payoffs. In each round, they made a private contribution using a Rs.35 budget provided at the onset of each round. These private contributions, depicted in Figure 2, related to different sanitation and hygiene behaviours they could engage in, ranging from doing nothing (equivalent to a contribution of Rs. 0) to all household members using a private household latrine (equivalent to a contribution of Rs. 35). 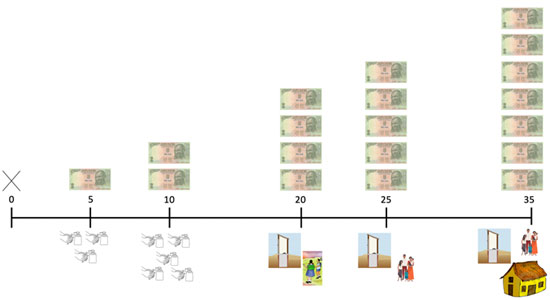 Note: In the figure, the valuations of payment cards indicate the following sanitation investment choices - Rs. 0: no sanitation/hygiene investment, Rs. 5: sometimes wash hands with soap, Rs. 10: always wash hands with soap, Rs. 20: ensure household children do not defecate in the open, Rs. 25: ensure all household members use public or neighbours’ latrine, Rs. 35 build and use a private household latrine.

Does it matter who is in your group and, therefore, could benefit from the public effects of private sanitation choices?

Group composition was randomised at the onset of our project. In half of the games, groups were entirely male or entirely female and in the other half, groups were mixed gender. Gender was used as a measure of social connectedness, as, in the context of rural India, there is evidence for different decision-making power, levels of interaction, and sanitation preferences by gender (Khanna and Das 2016, Routray et al. 2017, Stopnitzky 2016). This random variation allows us to compare how group composition-affected sanitation contributions during each round of our experimental games.

Figure 3 depicts the share of groups that reached the contribution threshold required to unlock the public payoff bump-up, by group composition. In round one, we observe a significant difference in this share, with mixed-gender groups less likely to reach the public threshold compared to entirely male or entirely female groups. These differences remain – although decreased – in round 2. By round 3, they disappeared entirely. These trends suggest that participants playing among their same-gender peers are more willing to contribute to sanitation – a good with both private and public benefits. Yet, trust or cohesion within groups can increase quickly when it is apparent that group members are seeking a common goal. 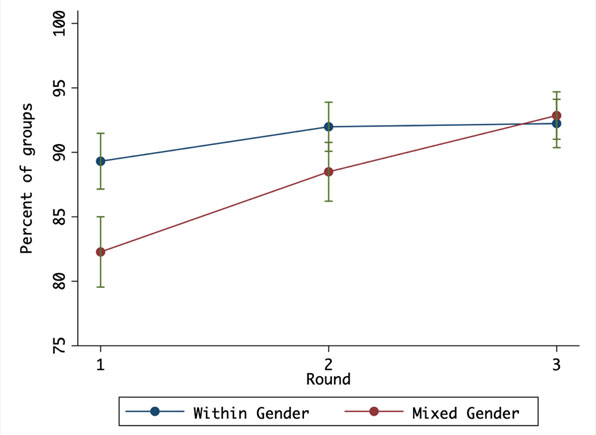 Experiences may vary with gender

We find further evidence to suggest that the degree to which group composition matters may vary by gender. The left panel and right panel of Figure 4 compare the share of mixed-gender groups that reached the contribution threshold to the share of male-only groups (left panel) and the share of female-only groups (right panel). We see the wedge is driven entirely by female groups: women appear more likely to contribute at higher levels when playing among other women vis-à-vis mixed-gender settings. While this wedge decreases over game-play rounds, it is the increasing contributions in mixed-group games that makes up the difference. 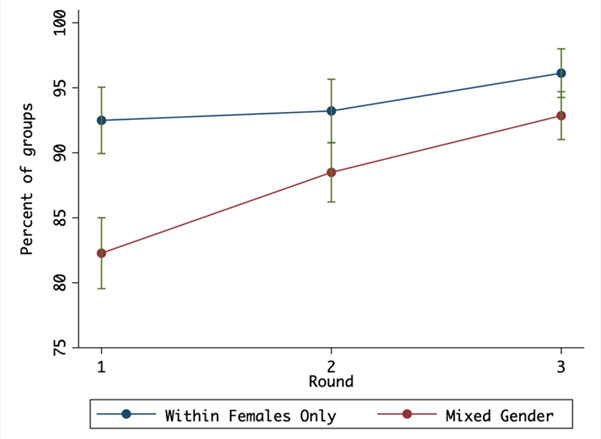 Our findings have important implications for policymakers:

Rural communities face environmental and public health challenges that can only be addressed through collective commitment to health improvements at the household level. Experimental games, such as those implemented in the sanitation space in Bihar and Odisha as part of our study, can offer insight into how households form preferences for improved sanitation and how these preferences inform their sanitation investments over time.