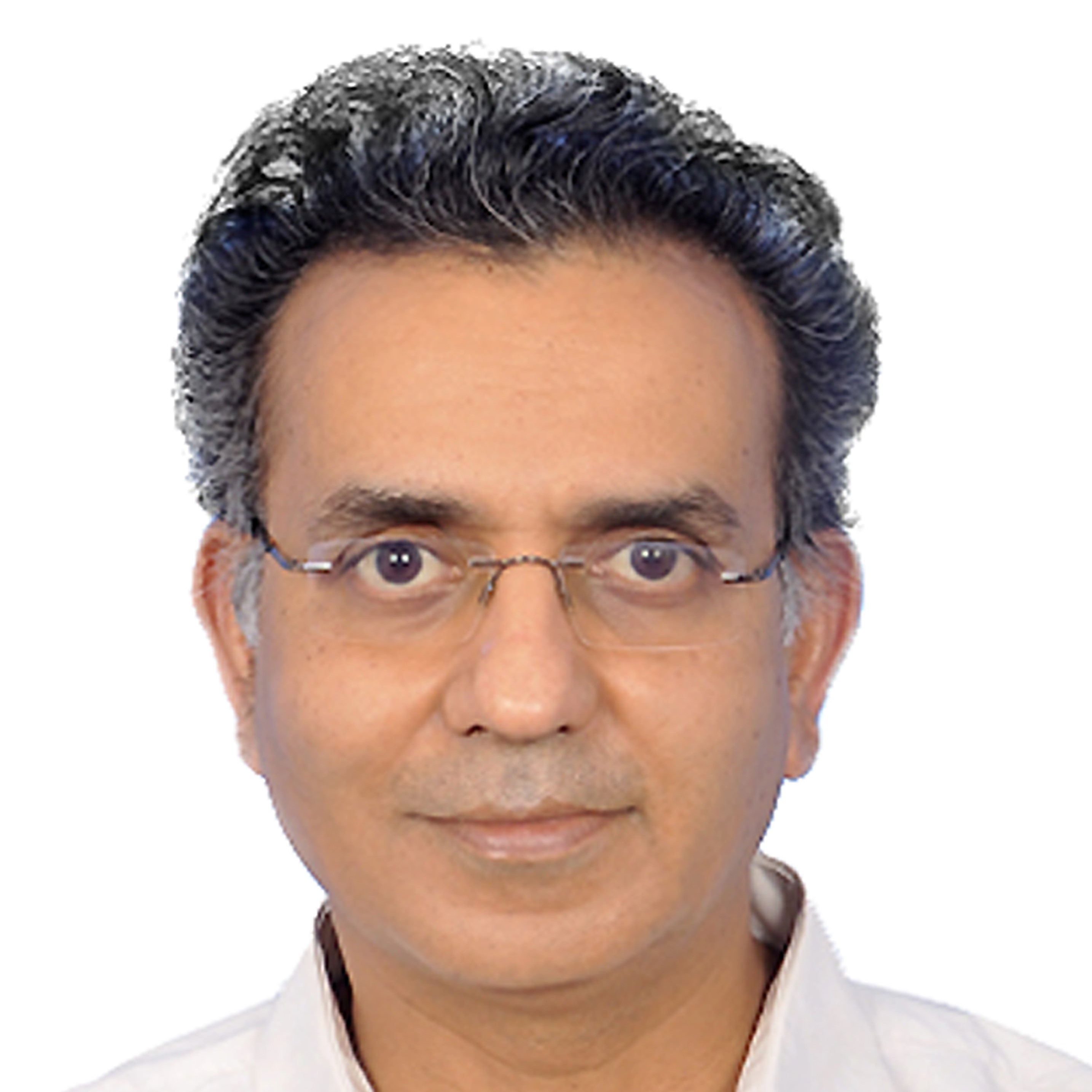 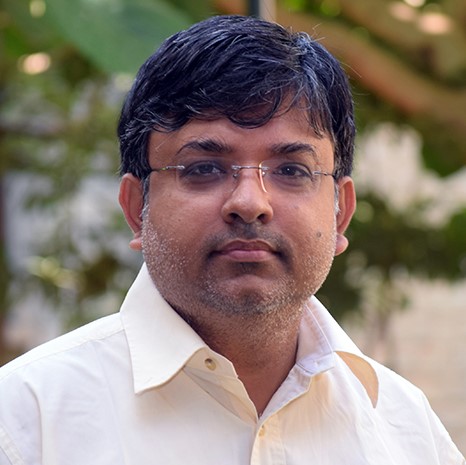 Reducing the demand for water – particularly in affluent, urban households – can lower the burden of increasing supply to ensure universal access, and sustaining it at an affordable price. Based on a field experiment in Bengaluru, this article shows that ‘habit-change’ interventions can lead to a 15-25% reduction in household water consumption without economic incentives or restrictions and these results persisted for the two-year observation period of the study.

Behavioural interventions, such as frequent exhortations not to drink-and-drive and gory visuals showing adverse effects of tobacco consumption, are increasingly popular policy instruments seeking a permanent change in citizen behaviour. There is growing interest in the application of behavioural sciences, backed by numerous publications from the World Bank, United Nations (UN), and a growing number of State-sponsored think-tanks, pioneered by the Behavioural Insights Team in Britain. This is an unmistakable trend – despite the likely novelty of the subject amongst most practitioners, and a nagging lack of persistence of the initial beneficial effects induced by a lot of these interventions (Frey and Rogers 2014, Kelly and Barker 2016). Achieving long-term and persistent behavioural change is an active area of inquiry (for example, Fielding et al. 2013, Brandon et al. 2017, Ehret et al. 2021) in water and energy conservation in households. In recent research published in PNAS (Vivek et al. 2021), we design a field experiment seeking persistent change of conservation behaviour by targetting a change in habits.

Households account for one-tenth and one-quarter of global freshwater and electricity consumption respectively (International Energy Agency, 2020, UN, 2019). Behavioural interventions at the household level provide relatively inexpensive policy instruments to conserve water, energy, and other environmental resources (Allcott and Mullainathan 2010, Carlsson and Johansson-Stenman 2012), though achieving long-term behavioural change has been challenging (Costanzo et al. 1986). The few cases of persistence are primarily based on social comparison, such as a modified bill-statement showing a comparison of household usage with the average usage in the community (Allcott and Rogers 2014, Ferraro and Price 2013), leading to an overall reduction driven by some of the households that were consuming more than the average.

However, a social basis of comparison can be problematic as current level of consumption may not be desirable (Cialdini 2003). In most affluent communities, the current level of usage may be unsustainably high and in most neglected communities, current level of supply or availability may be too low for a reasonable quality of life or hygiene. An objective basis of comparison such as a WHO (World Health Organization)-defined expected level of water usage in urban households (about 140 litres per-capita per-day, or lpcd) can be much more meaningful, apart from being a better metric for planning and administration of supply.

The scarcity of natural resources, inequitable access, and a high environmental cost of supply provide further motivation to address the lack of persistence of conservation behaviour. Water scarcity is particularly high in developing countries such as India where per-capita water availability has declined rapidly over the last seven decades as population has grown, especially in the cities (Narain and Pandey 2012, Shah 2016). Social inequities in access to water and pricing continue to prevail (McDonald et al. 2011, UN, 2019) – affluent communities tend to not only be high-users of water but also recipients of low-priced water, while the poorer communities often struggle to get enough water and pay a higher price for it (Whittington 1992, UN, 2019). Rapid urbanisation and growth in population in many large cities has led to a growing environmental footprint of water pumped from faraway rivers, reservoirs, and aquifers. Freshwater scarcity is expected to get worse with global warming leading to further depletion and unpredictability of surface water sources.

The use of water conservation policy instruments can reduce demand to help match supply (Hoque 2014). Behavioural interventions provide a particularly attractive policy option as compared to economic tools (such as price and restrictions) that are often difficult options, both politically and socially.

From water wastage to conservation

The behavioural intervention in our experiment does not involve the potentially problematic social comparison. Also, we avoid the role of in-person interactions that can lead to data-quality issues1.  We conducted the study in an affluent residential community in Bengaluru, in the state of Karnataka, which had installed water meters but had not started billing the households based on their water usage.2 This made it possible to avoid a data-quality issue present in all known prior studies – the presence of a price signal as an in-built incentive to reduce usage.

Our intervention is based on a theoretically grounded habit-change framework that integrates relevant knowledge of how the human mind works, especially ‘fast and slow’ modes of thinking and habits (Evans and Stanovich 2013, Kahneman 2011, Mukherjee 2010, Jager 2003, Wood and Rünger 2016). Habits are patterns of learned behaviour that we engage in without much conscious thought or attention. When we perform routine tasks on a day-to-day basis, such as taking a shower or washing dishes, we are driven by our habits. Changing bad habits (here, water wastage) requires deliberate thought and effort, repeated over time, to unlearn old habits and form better habits (that is, water conservation).

We employ the well-established theory of goal-performance (Locke and Latham 2006) as the intervention mechanism – goals translate into actions when goals are specific, feasible yet difficult, and the person has the motivation and skills to perform the actions toward one’s goal. Our intervention, a weekly water-usage report, provides simple water-usage information for the household (part A of the report in Figure 1), suggests a water-use goal with feedback on performance (part B in Figure 1), and provides tips on meeting this goal (part C in Figure 1) leading to goal-performance. These three parts shown in Figure 1 combine to help change habits pertaining to water usage in homes. Based on our habit-change framework, this intervention can induce deliberation about limiting water use through household-specific feedback about water usage. Further, by suggesting easy steps as tips, it is possible to invoke specific conservation actions towards the curtailment of water usage and improvement in efficiency of water use. We send this printed one-page report in Figure 1 for only five weeks, with new tips each week covering the locally relevant challenges in reduction of water use, such as reducing use of water in kitchen and shower. 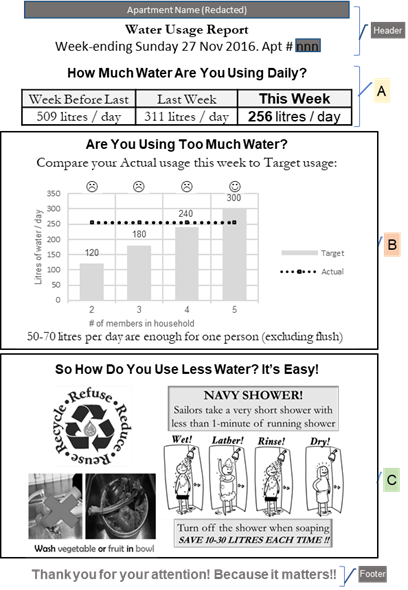 Prior to the start of the intervention, we randomly divide households into four groups – one ‘control’ group that does not receive reports and three ‘treatment’ groups that receive one (part A for group T1), two (parts A and B for group T2), or all three parts of the weekly reports (group T3). This design allows us to compare water usage across control and treated groups, and over time. Our experiment is divided into four stages: observations before the start of the experiment serve as the baseline or ‘before’ stage, followed by five weeks of during-intervention stage, and a cooling-off stage of over a year when there was no intervention. The last stage, ‘priced’, after the cooling-off period, refers to the introduction of a quarterly water bill based on the volume of water used at household level. The trendline of water usage by group (Figure 2) provides compelling support that our intervention is able to reduce water usage. 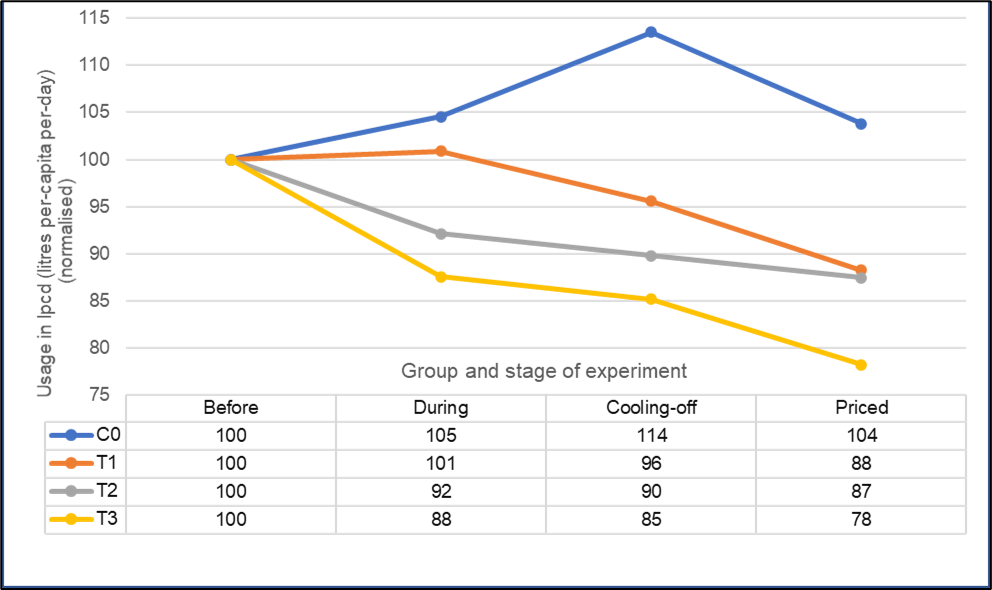 We find that 3 as expected, T3 – that receives all three parts of the report – responds with the highest reduction in water usage. These large effects also persist over the entire two-year observation period. T3 households reduce usage significantly during the intervention stage and further lower usage in subsequent stages. The T2 group has a relatively smaller and less persistent effect than T3. The reduction in water usage in T1 is not significant. The difference in water usage between the control and T3 group is not bridged by the introduction of price, as seen in the parallel blue and yellow lines in Figure 2, denoting further lowering of usage in T3.

Increasing water supply has been the main thrust of water management policy in India and much of Global South, and a lot of work remains to be done to reach the UN’s Sustainable Development Goal of universal access to safe and affordable drinking water. Reducing the demand for water can directly lighten the burden of increasing supply and sustaining it at an affordable price. Household water usage remains unequal – with increasing wealth, rising income inequality, and abundant 24x7 water supply in many urban pockets, in the midst of water scarcity around them.

Our study shows the potential of behavioural interventions as a relatively inexpensive tool that can free up a large part of water supply from such high-consuming households, without the social and political hurdles associated with other policy alternatives – such as billing for water at a high-enough price-point, or the practical hurdles in enforcing restrictions towards a reasonable level of water usage.  Our results support the effectiveness of behavioural interventions – both with and without the presence of price as an incentive to conserve.

Our intervention deals directly with the behavioural hurdles underlying high-usage through a clear understanding of the dual-process model of human thinking. Instead of a subconscious message, or change in structure without involvement of the consumer, this intervention directly engages with individuals to help them examine their current level of usage and assess their habits and structures with water conservation practices. This approach is in stark contrast to other popular interventions, such as exhortations to save every drop, that do not define what is the right level of usage or how to get there easily.

Our intervention focusses on change in habits to encourage a permanent change. Water conservation is maximised when curtailment and efficiency combine, as in the tips section of our intervention, leading to a multiplier effect on conservation (Inskeep and Attari 2014). A focus on efficiency alone also comes at the risk of a rebound effect wherein efficiency gains are lost due to increased use, as seen in the lighting sector where the use of space lighting has kept increasing despite innovations in efficiency (Herring and Roy 2007).

Our study builds on literature from behavioural sciences, applies it to water conservation through household water conservation practices (Benzoni and Telenko 2016, Ehret et al. 2020) and use of ethical influence in interventions (Cialdini 2003, 2009). The theoretically sound basis of our interventions, makes it possible to study and understand the underlying principles, and apply our approach in diverse settings to reduce demand, with suitable adjustments to the design based on context. Given that behavioural interventions are relatively new in practice and are showing potential, it is essential to rapidly build capacity for design and implementation of such interventions. With well-designed pilots, it would be possible to learn, fine-tune and scale-up such interventions for a large number of community- or even city-scale rollouts.