Insufficient school accountability and limited parental awareness of school quality can result in poor learning outcomes of students. This article reports the results of a randomised experiment in rural Rajasthan to better understand how greater awareness among schools and households of extant learning levels can lead to changes in student performance in an education market with both public and private providers of primary schooling.

Public schools in India are typically mediocre and often dysfunctional. Not surprisingly, therefore, between 2006 and 2014, private enrolment in primary grades went up 10 percentage points and about one-third of all enrolled children now attend private schools in rural areas (Pratham, 2015). While average learning outcomes in private schools are usually better, private schools typically hover just above the public alternatives that are available. Often, schools – public or private – cannot be held accountable for poor services if parents cannot correctly assess the quality of education being provided to their children. Thus, insufficient school accountability and limited parental awareness of school quality can be factors that result in poor learning outcomes of students. In International Growth Centre (IGC) research that is forthcoming in the Journal of Development Economics, we (Afridi, Barooah, and Somanathan), report the results of a randomised experiment in rural Rajasthan to better understand how greater awareness among schools and households of extant learning levels can lead to changes in student performance in an education market with both public and private providers of primary schooling.

Our research design allows us to test hypotheses about the nature of effective information by comparing results from ‘treatments’ (interventions) in which only one side of the market (parents or schools) receives information, with those in which school quality is common knowledge in the community. Unlike most existing information interventions, we do not induce community dialogue or mobilisation. Since collective action is more resource-demanding and often difficult to catalyse, it is useful to know whether low-cost information provision can aid education policy.

Specifically, we randomly assigned a panchayat (village council) (plausibly the entire local education market for primary schooling) to either a ‘control group’ in which no attempt was made to bridge existing information gaps in the education market, or one of four ‘treatment groups’ in which we provided either households or schools or both with report cards on student performance in curriculum-based tests (for Hindi, English, and Math) designed and administered by us for grades 3 and 4.

In the ﬁrst treatment (T1) only parents received a report card (P1) with their child’s (say, Yashoda) absolute score in the tests we administered and her rank in her grade, as shown in Figure 1. Parents were thus able to evaluate Yashoda’s performance in her grade. 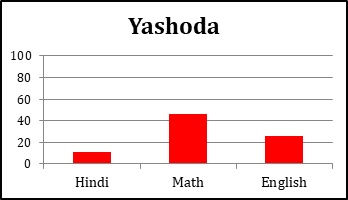 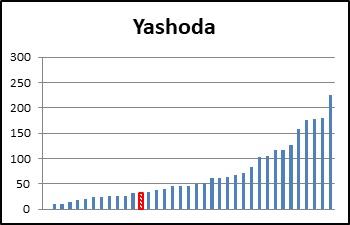 Notes: The graph on top shows the student’s (Yashoda) score out of 100 in each subject. The bottom graph shows the combined scores (out of 300) of all students in her class with the student’s score highlighted by the shaded, red bar. 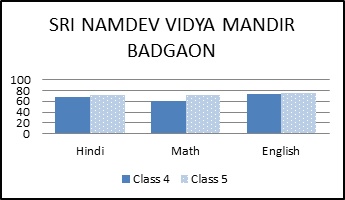 Note: The graph shows the average score in each subject (out of 100) of grade 4 (in blue) and grade 5 (in light blue) of a school.

Table 1. Number of students in the school-grade who achieved a particular cognitive skill

The third treatment (T3) had all the elements of the second (that is, P1 and S1) plus the average scores of all schools in the panchayat in the school report card (S2, shown in Figure 3). Hence, in addition to S1, schools were able to place themselves in the distribution of scores in the panchayat. But households did not have information on relative school quality.

Notes: This table reports the average score in each subject (out of 100) of all schools in a panchayat, by grade.

In treatment 4 (T4), all elements of treatment 3 were included plus a report card to the household (P2) on the performance of their child relative to all children in the panchayat’s schools. Thus, in the fourth treatment we tried to create common knowledge of relative student and school performance. 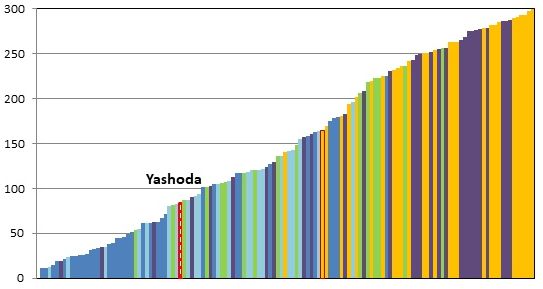 Notes: This graph shows the combined scores (out of 300) of all students of the same grade in the panchayat. Each bar shows the score of one student. Students of the same schools are depicted by bars of the same colour. The index maps the colours to the schools. The target student’s name is mentioned and her score is highlighted by the shaded, red bar.

Our experiment design is summarised in Table 2.

P1: (i) Child's score by subject (ii) Child's total (combined) score relative to all students’ combined scores in her grade.

P2: (i) Child's total score relative to the total score of all students in the panchayat with each school marked out.

S1: (i) Average score by subject and grade (ii) Percentage of students correctly answering each question by grade.

S2: (i) Average score of schools in the panchayat in Hindi, Math, and English, by grade.

Subsequent to the randomised provision of report cards on student performance at baseline (July – September 2011), we conducted another round of tests of learning levels, almost a year later (August – October 2012).

What type of information is most effective in improving learning?

Information to which side of the market is most effective?

We find that as compared to T3, providing information on relative school quality to households is necessary (T4). But this holds only for students enrolled in private schools at baseline – test scores improved by more than one-third or 30% of a standard deviation1 when information on relative quality of schooling was provided to both households and schools. Thus, common knowledge of relative school quality is necessary but not sufficient for improving learning outcomes. Empowering households holds the key.

The impact of providing information on school quality is jointly significant for all treatments for the private school sample but insignificant for public schools.

The improvement in learning outcomes was driven by the increase in the private schools’ resources and effort. We find that an index of school response to the intervention, measured by parental perception of schools’ effort, schools’ interactions with parents and resources, improved by 26% to 43% of a standard deviation, relative to the baseline, but only when information on relative quality of schooling (that is, T4) was provided to both households and schools in the private school sample.

We do not find any change in households’ education expenditures or parental effort in either the private or public school sample in any treatment arm. These findings suggest that when information on the relative quality of schooling is common knowledge, the service providers respond significantly when their incentives are linked to their performance in the market. Social pressures through information provision, alone, on poorly performing schools may not be sufficient to have a significant impact on school quality.

Our findings, thus, indicate that both the nature of information and the incentives of service providers can impact learning outcomes. Our experiment suggests that even in the absence of community pressures created through explicit dialogues between the service providers and households, information itself can be a powerful instrument for raising service quality. While our results support the findings of Andrabi et al. (2017) for Pakistan, they also suggest that public schools’ incentives should be redesigned to align them with those of the households (Banerjee et al. 2010).

Recent initiatives in the states of Delhi and Andhra Pradesh aim to create common knowledge of the quality of schooling at the primary level through objective ranking of schools on multiple dimensions (including learning outcomes) by making these ‘report cards’ available both publicly as well as through messages to parents’ mobile phones. Our findings lend support to such policy initiatives to improve the quality of schooling in India.

Banerjee and Duflo’s journey with Pratham